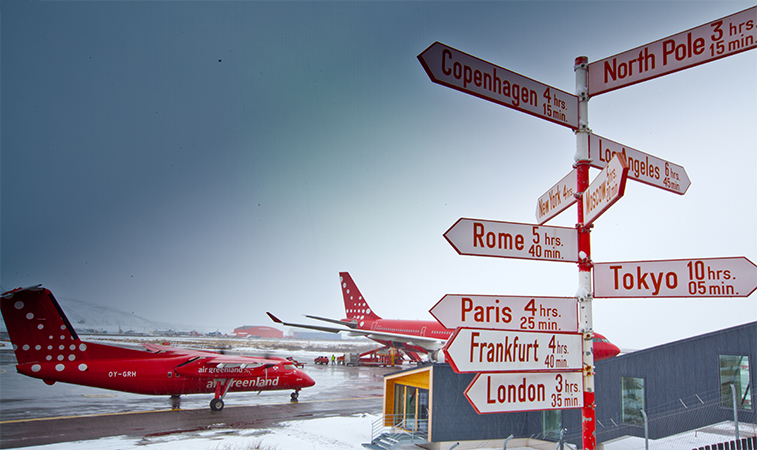 As airline fleets go, you could not get more dynamic than Air Greenland’s. The carrier currently has in its fleet one A330-200, six DHC-8-200s and one Beechcraft B200 King Air. In 2016 the airline flew 426,000 passengers, an increase of 7.8% from the 2015 total of 395,000. Along with increasing passengers, the carrier’s load factor also improved during the same period, albeit by 0.1%. 2016 was a record year for the airline in terms of total passengers carried. Of the international cities that are signposted at Kangerlussuaq Airport, the airline only offers flights to Copenhagen.

Air Greenland serves an island market which has an estimated population of around 56,500 in 2016, meaning that for every citizen, Air Greenland flew 7.5 passengers last year. While much focus in the North Atlantic in recent years has been concentrated on Iceland and the booming traffic being seen from the likes of Icelandair and WOW air, growth is also being reported across the water on the world’s largest island.

In 2016 Air Greenland carried 426,000 passengers, up 7.8% when compared to 2015’s total of 395,000. While the result of last year’s traffic is certainly a record for the carrier in the time period analysed, its margin over the previous record year of 2008 is just 5,000 passengers. However, 2016’s load factor of just above 67% is better than the 65% achieved in the last record year. Coincidentally, last year’s load factor was also a record for Air Greenland during the period analysed, albeit by just 0.1% against that achieved in 2015. 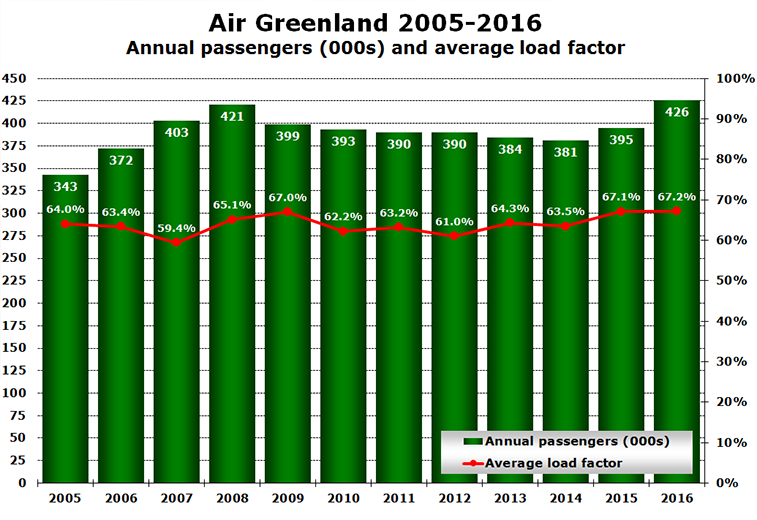 Presently, Air Greenland offers just two international scheduled services from Greenland, connecting Nuuk to Reykjavik/Keflavik and Kangerlussuaq to Copenhagen (classed as international in OAG, although Greenland is defined as being a constituent country in the Kingdom of Denmark). While these services appear to only be a minimal part of the carrier’s network, both links made-up just under 25% of the carrier’s annual seat capacity in 2016, growing from 22% in 2015. So while domestic capacity was cut by 7.7% last year, international services encountered a 6.7% rise in seats. For 2017, the carrier is reporting a further increase in international seat capacity, with a 5.6% upswing. Unfortunately the domestic market appears to be seeing more cuts, with OAG schedules indicating that Air Greenland is offering around 37,100 less annual seats in the sector in 2017 when compared to 2016, representing a cut of 7.2%. 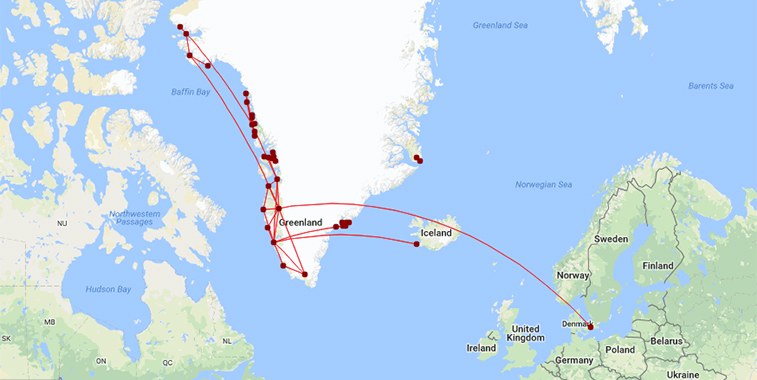 Air Greenland operates an interesting network that essentially involves operating domestic services in Greenland, while it also offers international flights to Reykjavik/Keflavik and Copenhagen. While these routes appear to be a small part of the airline’s network, the capacity they offer makes up for just under 25% of the airline’s yearly seat offering.