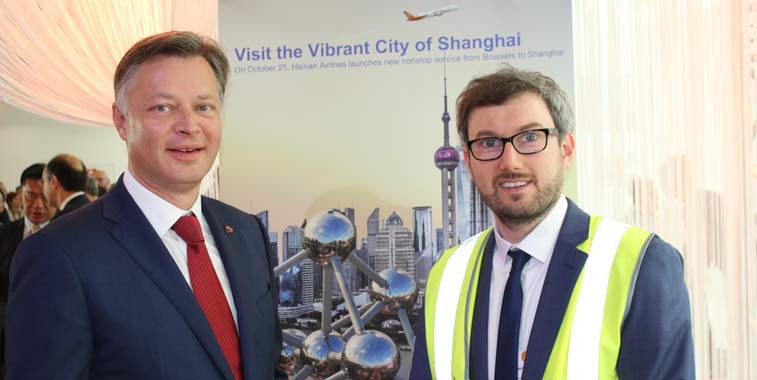 anna.aero was invited to join the celebrations at Brussels Airport on 25 October to welcome the arrival of Hainan Airlines’ new service from Shanghai Pudong, with the Belgian capital airport putting on quite the show to greet the airline’s second connection to Brussels after Beijing. anna.aero’s Chief Analyst Nick Preston caught up with Brussels Airport CEO Arnaud Feist, who explained that Brussels is targeting more connections to Asia including links to secondary cities in China. The airport’s next confirmed route launch to Asia will be Hong Kong on 25 March, the day in which Cathay Pacific Airways begins services to Brussels on its fleet of A350s.

Hainan Airlines commenced a three times weekly service between Shanghai Pudong and Brussels on 25 October. The 9,020-kilometre airport pair will be operated by the airline’s 787-9s on Mondays, Wednesdays and Fridays. “In recent years, Shanghai has become an attractive destination for investment, thanks to a steadily improving market position,” said Arnaud Feist, CEO of Brussels Airport. “Business leaders from both countries are reacting very positively to this new connection.” At the Shanghai Pudong route launch ceremony, Feist told assembled guests that Brussels Airport sees opportunities for additional connections to China. “We also see the potential offered by so called secondary and tertiary Chinese cities, many of them having populations larger than Brussels. The flow of Chinese tourists to Europe is considerable and growing. Over seven million Chinese people travelled to Europe in 2016. We continue to explore new opportunities and destinations with our Chinese partners,” adds Feist. Hainan Airlines is no stranger to the Shanghai–Brussels route, with it having last served the city pair back in 2011, with this relaunch marking the end of a six-year hiatus of services.

The Shanghai route is the second Chinese destination to be opened from Brussels, both of which are operated by Hainan Airlines. In 2006 the carrier launched services from Beijing which operate on a daily basis in the peak summer season, but reduces to four times weekly for W17/18. “Business and leisure trips between Belgium and China have already grown enormously in recent years, and our offer of direct flights between Shanghai and Brussels will only accelerate this expansion,” explained Huo Wei, VP of Hainan Airlines at the launch.

OAG Schedules data for 2017 shows that Shanghai is Brussels Airport’s fifth direct link to Asia after Bangkok Suvarnabhumi, Beijing, Tokyo Narita and Mumbai. In 2015 anna.aero was fortunate enough to attend Brussels’ welcome reception for All Nippon Airways’ first flight from Narita. The next route launch that Brussels has lined up from Asia is Cathay Pacific Airways, which from 25 March 2018 will begin A350-operated flights from Hong Kong.

The Shanghai to Brussels route becomes Hainan Airlines’ seventh route between China and Western Europe, but it is the only one to originate from Shanghai. Along with Hainan Airlines’ link to Brussels from Beijing, the carrier also links the Chinese capital to Berlin Tegel and Manchester. It also offers flights from Chongqing and Xi’an to Rome Fiumicino, with the latter Chinese city also being connected to Paris CDG.    With the new Shanghai–Brussels link, the Belgian capital becomes Hainan Airlines’ largest Western European airport operation in terms of weekly seat capacity this winter, with it offering over twice as many weekly seats than the second largest airport – Fiumicino. When anna.aero turned up at Brussels Airport  on 25 October, the inaugural 12:30 Hainan Airlines departure to Shanghai Pudong was already showing on the board, with expectant passengers arriving at the check-in desks. The airport and airline rolled out the red carpet treatment for the route launch, where guests were serenaded by a string quartet before the ceremony began. Arnaud Feist, CEO Brussels Airport; Hou Wei, VP Hainan Airlines; Kris Peerters, Deputy Prime Minister of Belgium; and Qu Xing, Chinese Ambassador to Belgium, each took to the stage to welcome the latest connection between Belgium and China. The speakers acknowledged the significance of the date, with 25 October 2017 being the 46th anniversary of the establishment of diplomatic ties between the two countries. Peeters said that the new link with the largest city in China will further boost economic, diplomatic, cultural and tourism links between the two countries. He added that close to 150,000 Chinese tourists visited Belgium in 2016 and that in the first six months of 2017 there had been a 22% increase in Chinese visitors. The four speakers were then joined on stage by Charles Michel, the Belgian Prime Minster, for a ceremonial ribbon cutting, before Feist and Wei exchanged gifts on behalf of Brussels Airport and Hainan Airlines. Wei was presented with a Tintin model rocket ship while Feist received a model of a Hainan Airlines 787-8. The route launch was graced by the obligatory cake. In this case an impressive three-tired impression of a Chinese-style temple took centre stage. The cake even managed to maintain its shape following the ceremonial cutting by the assorted dignitaries including Prime Minister Michel. 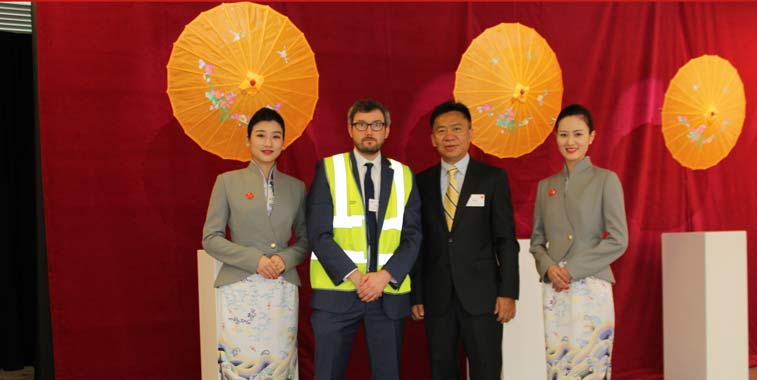 After the launch ceremony Wei took time to speak with anna.aero’s Chief Analyst. During his speech Wei explained that Hainan Airlines now has a fleet of 238 aircraft and serves 110 cities around the globe, adding in conversation with anna.aero that the airline is likely to increase the number of destinations it serves in Europe. Before the departure of the return leg to Shanghai, anna.aero was given the opportunity to visit the 787-9, registration B-7880, that operated the inaugural flight. This included a tour of the economy and business class cabins, where in the latter there are 180° degree lie flat beds. 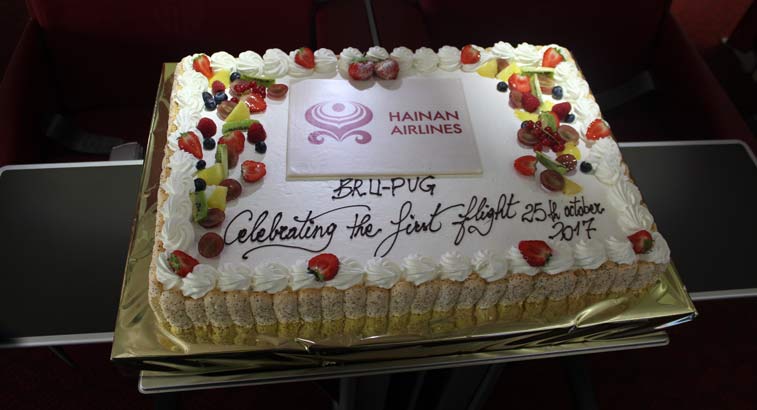 The launch of services between Shanghai and Brussels was marked with not one but two cakes! This cream and fruit topped design was spotted on-board the aircraft in the business class cabin, presumably to be enjoyed by the first passengers to depart the capital of Europe for China’s largest city. Back in the terminal, passengers began to board the aircraft at gate B05. Hainan Airlines flight HU 7922 to Shanghai pushed back at 12:26, several minutes ahead of schedule. It was greeted by the traditional water cannon salute before taxiing out for departure. anna.aero would like to thank Brussels Airport for inviting them to attend the inaugural flight ceremony of Hainan Airlines’ first service from Shanghai, in particular Tania Ter-Ossepiantz, Airlines & Trade Marketing Manager for the Belgian airport.