Bergerac-Dublin is “Skyscanner Unserved Route of the Week” with 16,000 searches; Ryanair’s sixth route from French airport for S18?? 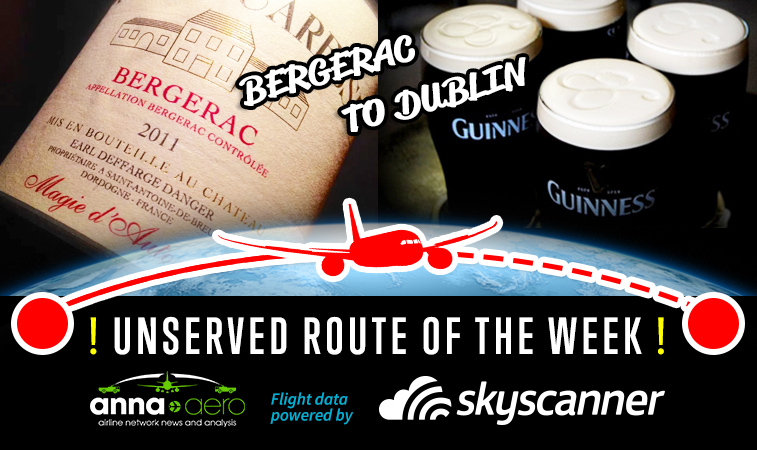 Apart from wine and beer connoisseurs wishing to travel on this potential route between Bergerac (home to around 1,200 wine growers) and Dublin (home of Guinness), there are masses of leisure travellers – 16,000 to be more precise – that want to access the Irish capital’s culture or second homes in the Dordogne. I’ll drink to that!

With 16,000 searches in the last 12 months, a potential city pair from Bergerac to Dublin has been identified as this week’s “Skyscanner-anna.aero Unserved Route of Week” – a powerful analysis based on aspirational data captured from the Skyscanner.net flight comparison site used by +60 million unique visitors per month. “There were 403,000 French visitors to Ireland in 2016, and 35% were from Southwest France [Source: Visit Ireland],” suggests Emily James, Head of Marketing & Route Development, Bergerac Airport. “The traffic flows from UK and Ireland last year are even more impressive, with close to one million tourists visiting the Dordogne [Source: Orange Business Solutions].” 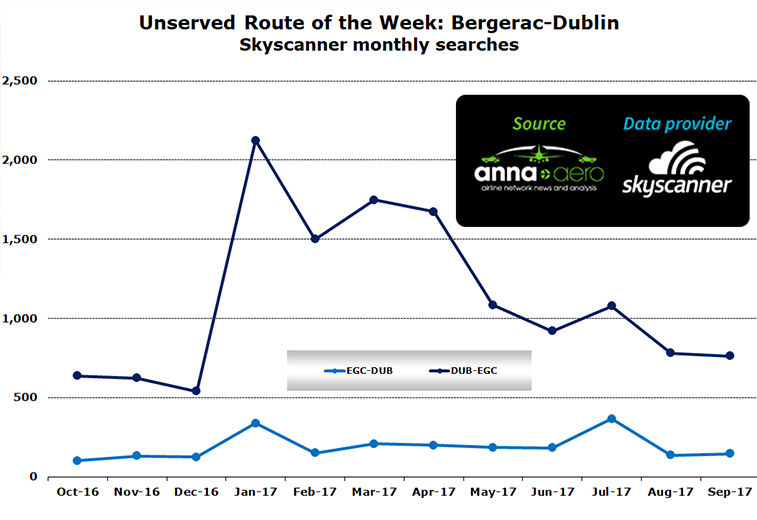 anna.aero recommends Ryanair or Flybe (or even CityJet) to start this service

Skyscanner demand on this week’s unserved route shows a preference towards the Dublin end of the city pair, with a 85/15 split, so on this basis we looked at potential carriers at the Irish origin first. According to OAG schedules for the week commencing 6 November, the largest carrier at Dublin is Ryanair (40% share of weekly seats). The ULCC’s 68-destination non-stop route network from the Irish capital presently consists of just four French destinations – namely Paris Beauvais (served 12 times weekly), Nantes (three), Nice (three) and Carcassonne (two). However in the peak season its coverage of the French market increases dramatically, as it also operated to Biarritz, La Rochelle, Rodez and Tours in S17 in addition to those points being flown this winter. Reflecting on this information, Ryanair clearly has a strategy to serve regional points in France from Dublin on a seasonal basis, and a route to Begerac would seemingly fit into this network philosophy.

Dublin’s second biggest carrier is Aer Lingus (35% share of weekly capacity), offering over 105,000 one-way weekly seats across a 57-destination non-stop network. However, just like its nemesis, it currently has a limited winter programme to France, which is again greatly expanded during the high season. Its present three destinations of Paris CDG (four times daily), Lyon (five times weekly) and Bordeaux (four times weekly) are augmented with the addition of Nice, Toulouse, Perpignan, Marseille, Rennes, Montpellier and Nantes in the summer. On this basis the IAG-owned carrier could also be considered as a likely target airline on this potential city pair now that this Skyscanner data has been made public. “In 2016, the final destination of 22% of passengers on Dublin-Bordeaux and 12% of Dublin-Toulouse was to the Dordogne region [Source: INSEE & CRTN],” confirms James.

Another airline based in Dublin, and its eighth largest by capacity, may also want to contemplate a service to this part of France. Regional carrier CityJet, which still offers a limited scheduled operation despite focusing on more ACMI-type services for other airlines, also has experience in the French regional market, having flown to Toulon and Avignon from London City during 2017. On this basis, a route to Bergerac from Dublin would also not be entirely out of the question for CityJet either.

Considering the French end of the route, the airport’s #1 capacity provider in S17 was again the Irish ULCC, controlling 57% of weekly seats. As you would expect, the UK and Ireland market features heavily in its network from Bergerac, with peak season services to London Stansted, Liverpool, Bristol, Brussels Charleroi and East Midlands being offered in S17. This type of network is also prevalent for the French airport’s second largest airline this summer, with Flybe (21% share of weekly seats) operating to Southampton (eight times weekly), Birmingham (five), Manchester (two), Edinburgh and Exeter (both weekly). Given their presence in the market, both carriers could legitimately make a business case for a Dublin-Bergerac sector to be added to their respective S18 flying programmes over the coming months.

When looking at the previous year of search data, the busiest month for potential traffic flows (for both directions on the route combined) is January 2017, with nearly 2,500 searches, almost 1,800 higher than the lowest monthly figure, which was recorded in December 2016 (700 searches). Given that this city pair is a seasonal leisure service, this type of search traffic profile is to be expected, as many potential passengers look to book their summer holidays just after Christmas. According to OAG Traffic Analyser, because there is no direct service, the top three connecting options chosen by those passengers who did book travel between Bergerac and Dublin in the last 12 months (year ending August 2017) indicates that the majority of connecting travellers used Southampton (45%), Manchester (32%) and London City (11%). A total of six different transfer hubs were used by passengers looking to fly between the two airports over the past year. “We know that in 2016 there were around 5,000 indirect passengers flying via Southampton, Birmingham and London City, as well as over 3,000 self-connecters travelling via London Stansted [Source: Wuita Statistics Bergerac],” adds James.

Indeed, an O&D that is not served by a non-stop flight will typically display a low purchase rate and low traffic. In this instance Skyscanner’s Travel Insight indicates a monthly average of 1.2% for the Bergerac to Dublin route (see graph below). Therefore, if there was a Bergerac to Dublin route, and if bookings performed in line with the “Skyscanner market average” for direct services at both airports (6.5%), the airline operating this route could immediately expect an improved purchase rate of a whopping 442%, without any increased marketing spend. However, with 16,000 annual searches in the last year, a weekly or twice-weekly seasonal service should be immediately viable for the airline choosing to start this potential city pair. Bergerac’s James had one more statistic to conclude with: “Last year, the expat UK & Irish community in the Dordogne was estimated at 45,000 – the largest in France [Source: British Consulate Bordeaux].” 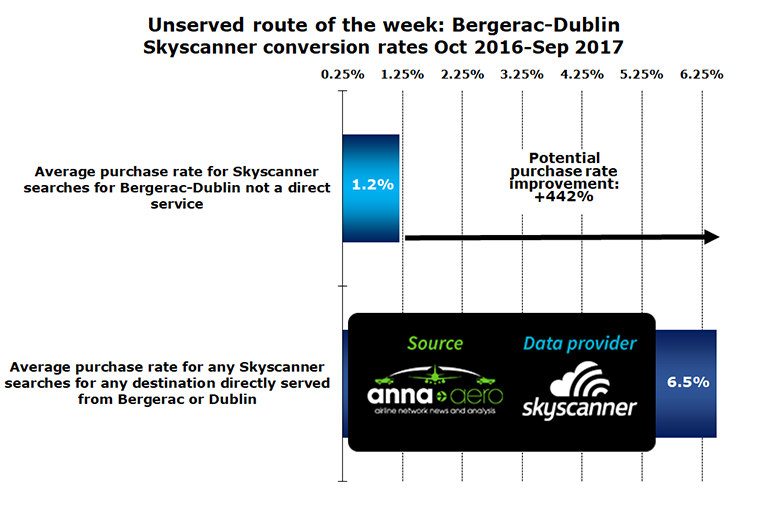