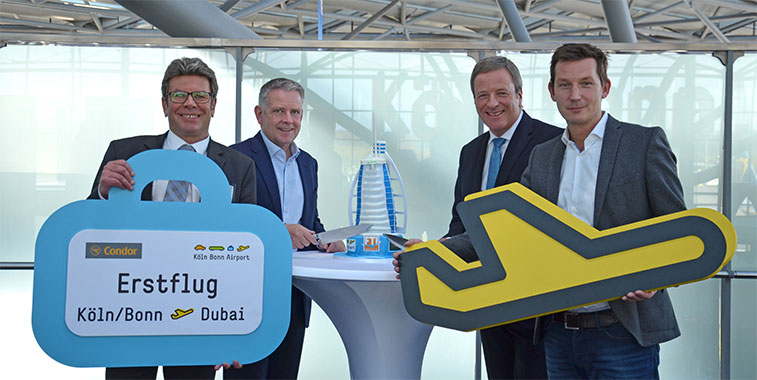 Another German airport celebrated a new charter service to Dubai Al Maktoum with FTI and Condor on 7 November, as Stuttgart celebrated the start of its weekly (Tuesdays) operation to UAE. The 4,767-kilometre route will be again flown by the leisure airline’s 275-seat 757-300 fleet. 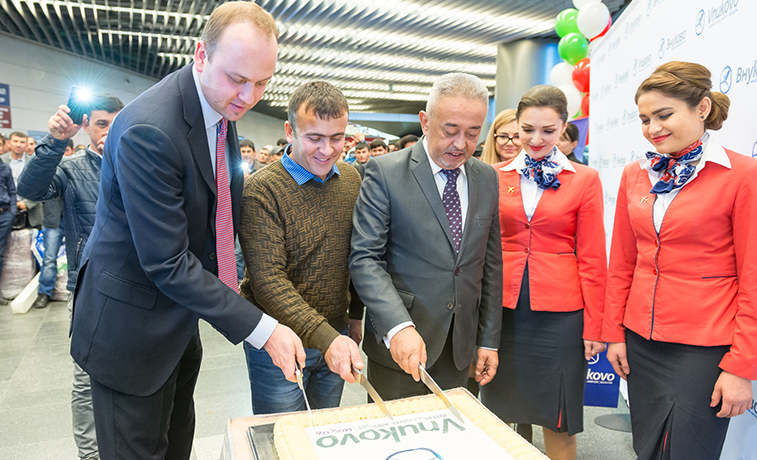 On 30 October Somon Air launched flights to Moscow Vnukovo from Khujand in Tajikistan, with the route being celebrated at the Russian capital airport with a cake cutting ceremony. The following day the airline commenced operations from Kulob, with 3,108-kilometre link being flown three times weekly on its 737-800s, with the 2,918-kilometre route from Khujand seeing the same weekly frequency and aircraft type. Vnukovo becomes Somon Air’s second airport operation in the Russian capital after Moscow Domodedovo, with it offering a daily service to the latter airport from Dushanbe. 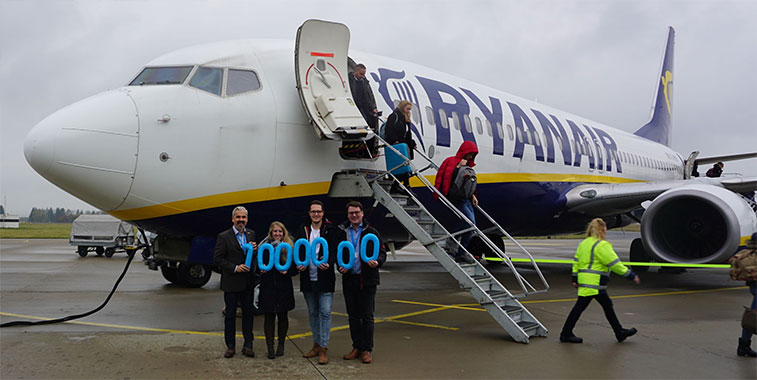 This is what you call a birthday surprise! When the student Janek Hartmann arrived at Memmingen Airport for a birthday treat flight to Stockholm on 6 November, he did not suspect anything – shortly afterwards he was a millionaire, as the airport’s one millionth passenger of 2017. For Ralf Schmid, Memmingen’s MD, the newly-minted millionaire is the reaffirmation that the airport is on course for success again this year. “Our forecasts are absolutely right, they were almost a bit too cautious.” Since the magic million-mark was exceeded, he now expects the record-breaking result of 1.15 million passengers by year-end. The basing of a Ryanair aircraft, which has provided six new destinations since September, has played a major role in this growth. But also Wizz Air has expanded its offer and only serves year-round destinations. Posing with the all-important numbers were: Memmingen MD Ralf Schmid; Anna Berger; the freshly baked “millionaire” Janek Hartmann; and Memmingen Sales Manager Marcel Schütz. On 30 October, Ryanair made its first scheduled flight from Brussels Charleroi to Plovdiv. The service was baptised by Plovdiv’s firefighters with a friendly “water salute” and passengers were also warmly welcomed in the arrivals hall. The Bulgarian airport’s Commercial and Aviation Marketing Manager Alexander Gyurov (centre with thumbs up), was on the apron to meet the inaugural flight crew. 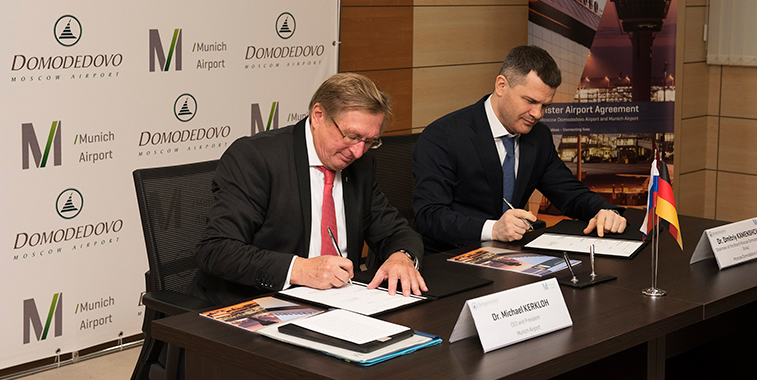 Moscow Domodedovo and Munich airports this week signed a sister airport agreement, with the German airport’s CEO Dr. Michael Kerkloh and Chairman of the Board of Domodedovo, Dr. Dmitriy Kamenshchik seen penning the new venture at a special ceremony highlighting the partnership. The aim of the partnership is a systematic knowledge transfer for employees and managers on both sides. It will include such activities as exchange programs that will give employees an up-close look at the daily workings and processes of the partner airport. The sister airport agreement, as it is known, also calls for an intensive exchange of ideas with regard to terminal planning, IT, real estate development, security and digitalisation. “Munich and Moscow is a partnership between equals. The continuous interactions with our sister airports in America, Asia and Africa help us to maintain and improve on our high quality standards. That makes it an even greater pleasure for me to welcome our first sister airport in Eastern Europe,” said Kerkloh. 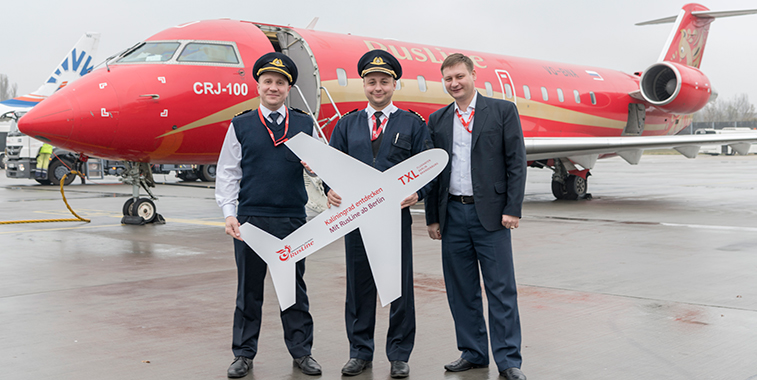 RusLine last week commenced flights between Kaliningrad and Berlin Tegel. Seen celebrating the launch at the German airport are crew members Ivan Prasolov, Jewgeni Cheledinov and Andrey Prokofiev. The first flight was meant to take place on 30 October, but due to bad weather conditions the first flight actually arrived in Tegel on 31 October.  RusLine will operate three weekly flights on the route using its CRJ 100s.

Representatives from Ryanair, Transavia, TUI, Eurowings and Turkish Airlines attended the recent Eindhoven Aviation Summit. During the event there was a presentation on what the future of Eindhoven Airport will look like, but it also showcased why the region is so successful, visiting icons such as Dutch Design Week, the La Trappe brewery, the Tesla car factory (which is located just 30 kilometres from the airport) and the international top football club PSV. Phoenix Mesa Airport celebrated the seasonal relaunch of WestJet’s service from Calgary Airport on 26 October, with cakes and balloons. The 1,988-kilometre sector is flown twice-weekly (Thursdays and Sundays). 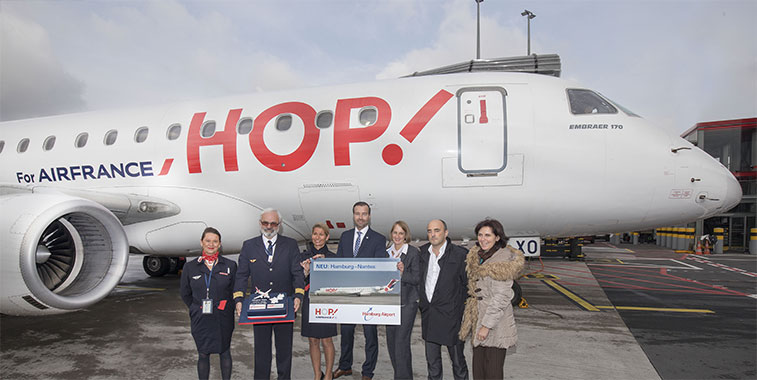 Since 29 October the Air France subsidiary HOP! has linked Hamburg with Nantes, operating three flights per week year-round. The French city is also a completely new destination for the German airport, and there has never been scheduled services between the two cities before. “With Nantes, HOP! is opening up a new destination for Hamburg Airport in the west of France,” says Jörgen Kearsley, Head of Aviation Marketing at the German airport. “Whether it’s for a city break or as a starting point for travel to other destinations in France, the HOP! service to this beautiful university city offers our passengers attractive new travel possibilities. I am certain that the route to Nantes will prove to be the beginning of a successful partnership.” 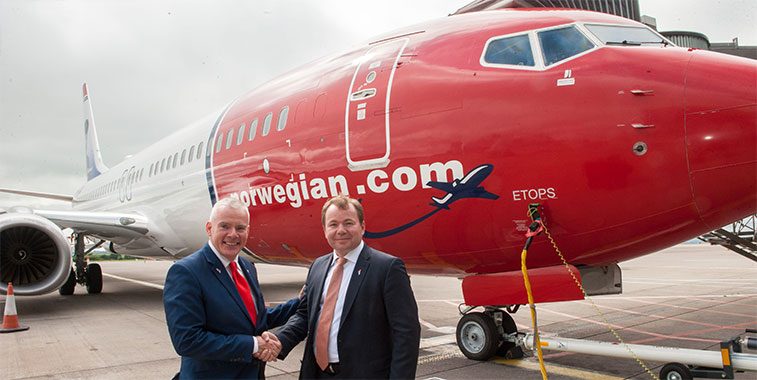 Cork Airport is partnering with Tourism Ireland and Norwegian to launch an extensive marketing campaign in the US to promote tourism in the region. The campaign, which is being launched this week in the greater Boston region, will drive awareness of Cork and its unique position as the Gateway to the Wild Atlantic Way and Ireland’s Ancient East, as well as promoting the direct transatlantic access to Cork with Norwegian. 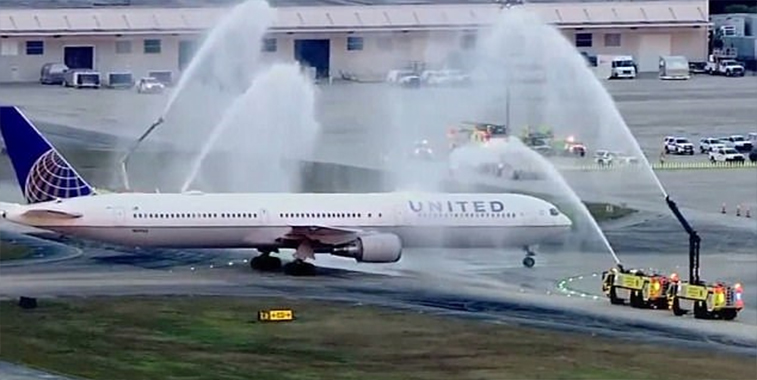 Houston Intercontinental welcomed back the Houston Astros with a double water arch salute on 2 November after winning the World Series title. The baseball team beat the Los Angeles Dodgers 5-1 at the Dodgers’ stadium in California to claim victory. This was the first time the team had won the title.