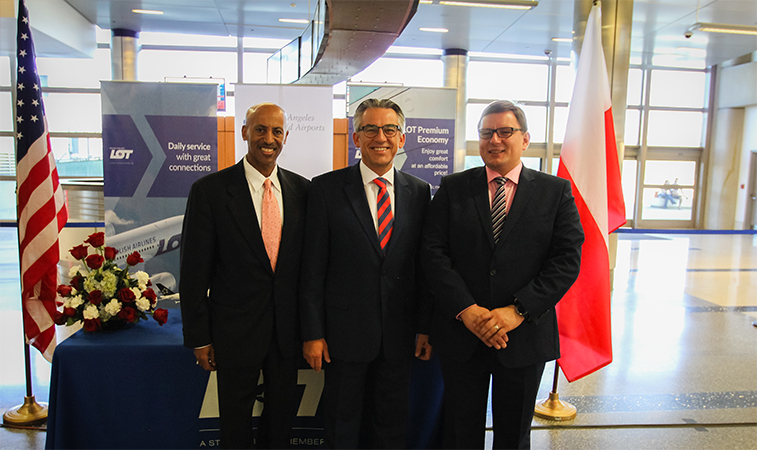 In April LOT Polish Airlines commenced operations between Warsaw Chopin and Los Angeles. Seen at the carrier’s route announcement back in October are: Samson Mengistu, COO of Los Angeles World Airports; Mariusz Brymora, Consul General of Poland in Los Angeles; and Rafał Milczarski, CEO of LOT Polish Airlines. The Polish airport has had a bumper start to 2017, with H1 traffic up 25% to 6.98 million passengers when compared to H1 2016.

Warsaw is served by two airports – Warsaw Chopin, its main gateway, and Warsaw Modlin. In total, both airports combined in 2016 hosted 15.69 million passengers, up from 13.79 million in 2015, representing a growth rate for traffic from Warsaw of 14%. While Modlin encountered an 11% rise in passengers last year, the leading airport for growth was Chopin, with it seeing passenger numbers increase by 15%.

Last year Chopin greeted over 12.83 million passengers, up from the 11.21 million that it processed in 2015. Things are looking even better for the airport in 2017, with H1 traffic this year up 25% when compared to the same period of 2016. A total of 6.98 million passengers travelled through Chopin during the first six months of the year. To give a perspective to this growth, in 2010 it took the airport until early October to reach 6.70 million passengers, over three months more than it has taken Chopin to reach that level in 2017. 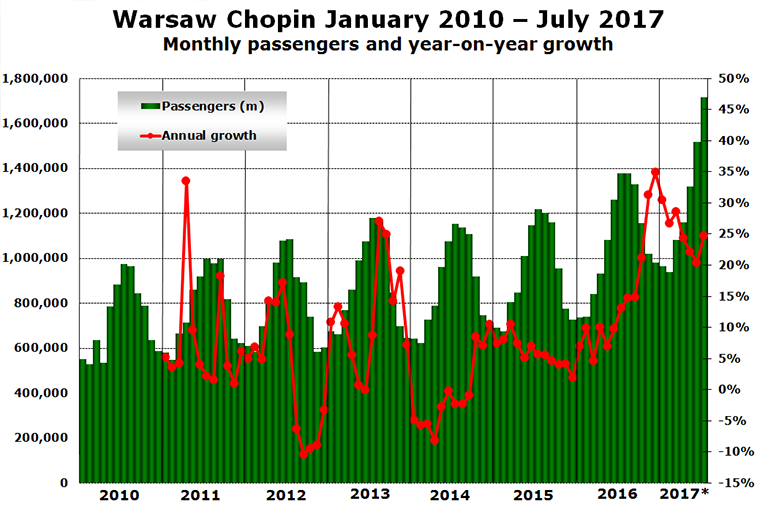 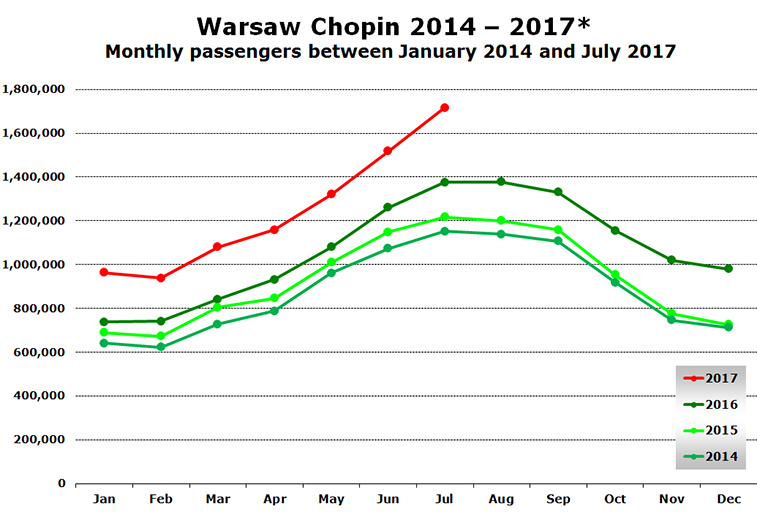 While Chopin’s growth has been significant, it has been spread evenly over the year. While most airports which see sudden surges in growth often report increasing seasonality profiles, Chopin has gone against the norm, with its seasonality profile improving as traffic levels rise. In 2015 the airport scored 5.61 – a ‘Good’ rating when using anna.aero’s SVID (Seasonal Variation In Demand) Calculator. In 2016 this result dropped to 5.25. While this is still recorded as a good rating, it is showing that the airport’s seasonal profile is becoming flatter.

LOT Polish Airlines is by far Chopin’s leading airline, with the Star Alliance member accounting for 49% of all seats from the airport in 2017. The Polish national carrier has seen extensive growth in recent years, with it increasing its seat capacity from Chopin by just over 20% in 2017 when compared to the year before; in 2016 it grew its offering by 22% versus 2015 figures. 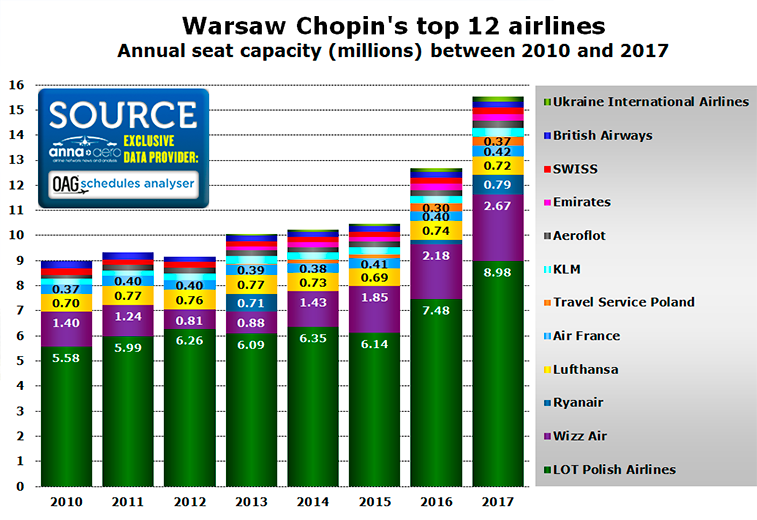 A similar trend can also be seen from Chopin’s leading ULCC Wizz Air, with the airline highlighting a rise in its seat availability from Poland’s premier gateway by just under 23% in 2017, while its capacity in 2016 was 18% greater than in 2015. One carrier which Chopin appears to have a love-hate relationship with is Ryanair. The carrier returned to the airport in 2016 after a three-year absence (having been a replacement airport while Warsaw Modlin was shut for runway works) with three domestic routes to Gdansk, Szczecin and Wroclaw. Indeed, the capacity it is offering on these sectors makes the Irish airline the third largest carrier at Chopin in 2017. However flights to Gdansk and Wroclaw ended at the start of the winter season, with Ryanair once again reducing its presence at the airport. In 2008 Ryanair also served Chopin with a daily flight from Dublin, but this route ended at the start of W08/09. In total 43 airlines are serving Chopin in 2017 when referring to OAG schedules, while a 44th – Ural Airlines – is expected to begin flights from Moscow Domodedovo on 24 December.

Frankfurt is Chopin’s number one connection

Frankfurt, a route flown from Chopin by Star Alliance members Lufthansa (operates 65% of capacity on the city pair) and LOT (35%), is the airport’s number one route in 2017. Seat capacity on the sector to Germany’s financial centre has increased by 0.6% during the course of the last 12 months. Of Chopin’s top 12 routes, three (highlighted in light green) are domestic connections, with the leading two – Wroclaw and Gdansk – seeing cuts in 2018 as a result of Ryanair’s decision to cull its services. Ironically these two sectors were the fastest-growing routes in the top 12 from Chopin this year, with both seeing an increase in capacity of over 60% due to Ryanair’s operations. 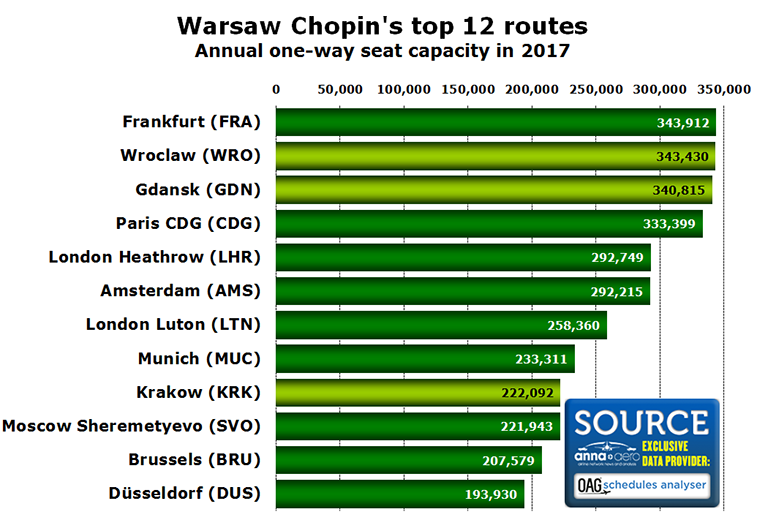 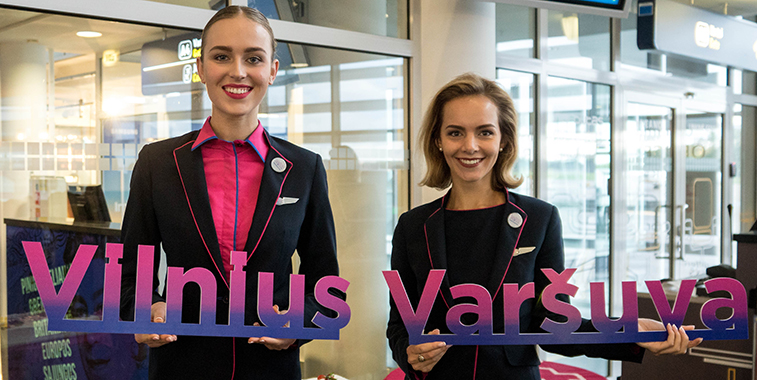 Back at the start of September Wizz Air commenced a new service between Warsaw Chopin and Vilnius, a route already served by LOT Polish Airlines. With Wizz Air introducing this route to its Warsaw network, it means that capacity to the Lithuanian capital has increased by 39% for 2017, making Vilnius Chopin’s 27th busiest route this year.