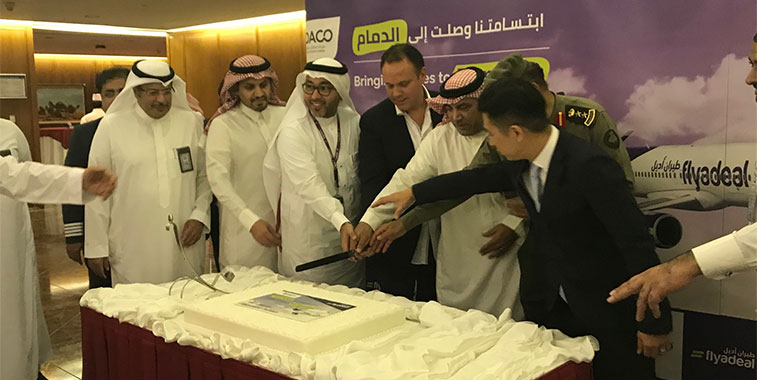 Not even two months old, flyadeal last week launched two new domestic routes from its Jeddah base, commencing double-daily (from 15 November) operations to Dammam and daily flights to Gassim. The LCC sister of Saudi Arabian Airlines is currently only flying its three A320s within the domestic market.

Do you want to fly for less? Well according to new Saudi LCC flyadeal they will put a smile on your face if you do. Based in Jeddah, the carrier which launched on 23 September with double-daily domestic flights to Riyadh (now flown five times daily), is a sister company of Saudi Arabian Airlines. The airline operates three A320s on a solely domestic network with a possible operating schedule as suggested below:

All three city pairs are flown at least daily, making flyadeal’s initial schedule relatively easy to interrogate. Arranging the flights in this way, which may or may not represent the airline’s exact flying programme for its three units, indicates that there are still gaps in the schedule for it to exploit in terms of adding new routes –unless these gaps are intended ‘firebreaks’ to ensure a certain amount of operational reliability in these critical early days when airline reputations are either built or burnt. The three routes see the aircraft flying a combined 28 hours and 40 minutes per day, giving each aircraft an average of around nine hours and 40 minutes. The average sector length is just under 920 kilometres, with an average sector time of about one hour and 48 minutes.

One virtue that most LCCs proclaim are short airport turnarounds, with European ULCCs like Ryanair and Wizz Air managing in some cases 25-minute turnarounds. Analysis of the 13 turnarounds performed by flyadeal (night stops in Jeddah are excluded) each day, and based on the above schedule, reveals that its average is just under 47 minutes, with the longest being 70 minutes (aircraft one; sector two to sector three) and the shortest being 35 minutes (there are five of these). This would indicate that the LCC can still shave more ground time in favour of getting the aircraft flying more.

The airline’s website informs us that flyadeal is low cost and high value. Like many other carriers of its ilk, it gives passengers the ability to choose to pay for the services they want, including extra leg room and in-flight meals. In terms of the number of seats onboard its three A320s, according to OAG schedules, they are configured with 186 seats. This is snug when compared to other carriers in the market with similar equipment. SaudiGulf Airlines’ A320s are fitted with 136 seats, whereas fellow LCC flynas has a less spacious, more LCC-like 164 seats. Sister airline Saudia has three different configurations on its A320 fleet, ranging from the 116 seats on its ‘business configuration’ aircraft, 132 seats on its ‘standard configuration’ ones, and 144 seats on its new A320ceos.

Where next will you be able to flyadeal?

The airline is flying with an initial fleet of eight single-class (186-seat configuration) A320s, out of which three have been delivered and are in operation. Its delivery schedule will see the remaining five arrive through to the middle of next year. An RFP for 50 additional aircraft has apparently been sent out to manufacturers, so with this capacity in the pipeline, significant network expansion is inevitable. “We have plans for new routes within the Kingdom over the next few months, followed by international flying in the second half of 2018,” says flyadeal CEO Con Korfiatis. “Our first international route will be…wait and see!”

Based on the CEO’s comments, the airline will at least in the short-term be looking to add more domestic sectors from its base, and given the scale of the Saudi Arabian domestic market, flyadeal has a selection to chose from. With the exception of the three currently served routes (highlighted in light green), other prospects might include Abha, Madinah, Gizan and Tabuk, all of which have sizeable market potentials (given their respective weekly capacities), and are bigger than the presently served city pair of Jeddah-Gassim. 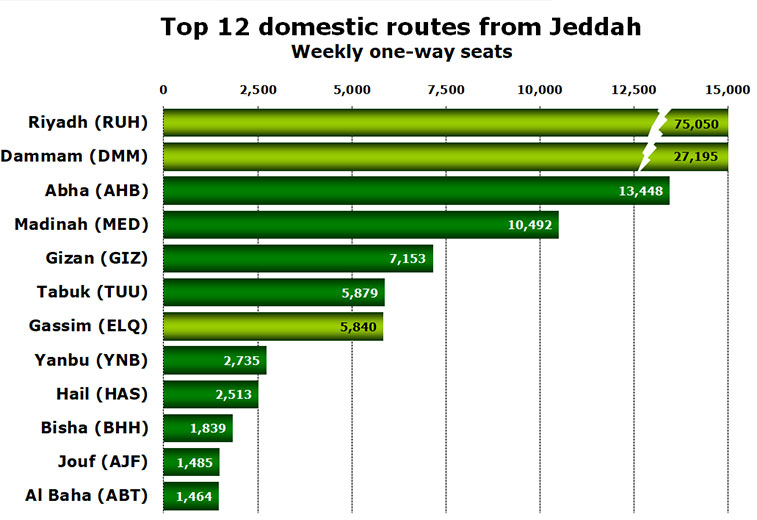 Abha is flown by Saudia 72 times weekly, flynas 19 times weekly and SaudiGulf Airlines six times weekly, and may be the most ripe market for some more LCC capacity. The 320-kilometre city pair to Madinah from Jeddah is more dominated by the flag carrier than the Abha sector, as it provides 59 of the 63 weekly frequencies (the remainder are flown by flynas), however capacity on this route will fluctuate considerably given religious traffic flows at particular times of the year. The capacity story is similar on the Jeddah-Tabuk city pair (Saudia – 30 weekly flights; flynas – daily), with the SkyTeam airline dictating total seats in the market from the LCC, but Saudia is slightly less commanding to Gizan with 71% of weekly frequencies.

Looking at the international routes that might be considered by flyadeal this time next year, Dubai would be a likely candidate, currently flown by five serving carriers. With 49 weekly frequencies already being offered by LCCs (35 from flydubai and 14 from flynas) between the two points, and subject to any capacity limitations imposed through any bilateral agreements, flyadeal may well be contemplating giving its parent a different product option on this busy city pair. With eight predominantly full service airlines flying to Cairo from Jeddah at the moment, lead by EGYPTAIR (26 weekly flights) and Saudia (23 times weekly), flyadeal may want to offer a challenge to the established LCCs, like flynas, which operates daily to the Egyptian capital. 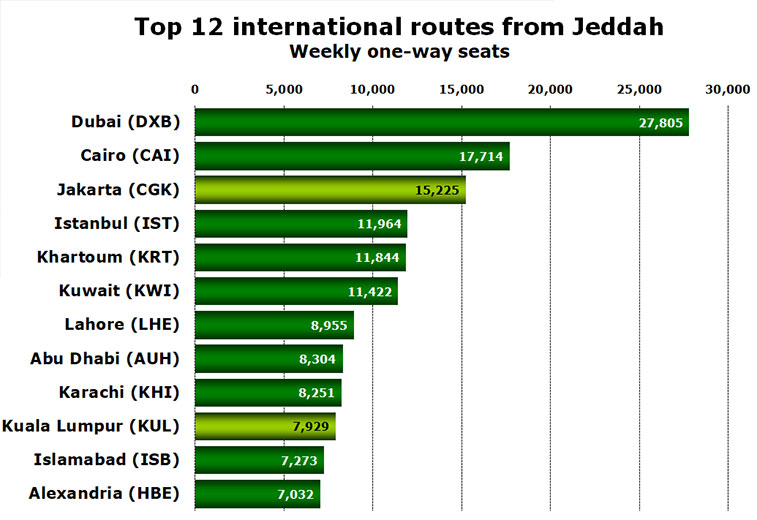 Highlighted in light green, perhaps the only two routes which might not be being considered by flyadeal as international sectors are Jakarta and Kuala Lumpur, which would be a stretch operationally for the airline’s A320 fleet. With those two exceptions, the rest of the top 12 international routes (by one-way weekly capacity) could easily be city pairs adopted by the LCC from next year onwards.

An airline with personality

“With the launch of flyadeal, we have brought a fun personality, everyday low fares and additional seat capacity to the Saudi Arabian travel market.” says Korfiatis. “Our message to the customer is we present clear and simple choices so you only pay for what you need. The feedback has been overwhelmingly positive: customers are excited and we plan to build on this momentum, as we explore the opportunity to service new routes within the Kingdom and throughout the region. From indications so far, there is a dynamic travel segment that has an appetite to fly more than ever before, and flyadeal couldn’t be more pleased with the warm welcome we have received in the domestic market.” 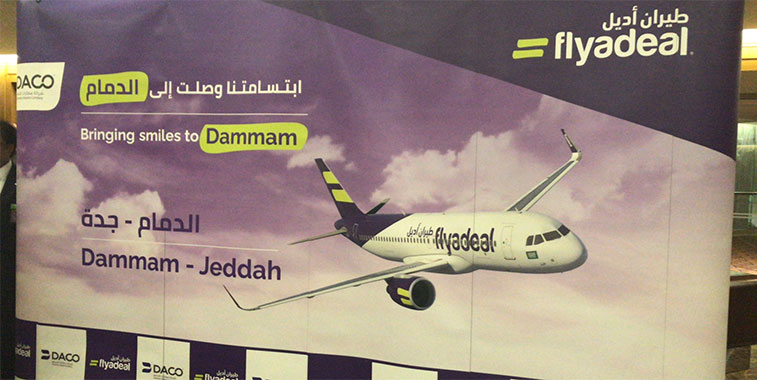 Where will the next route launch poster be? Top of list might be Abha, Jeddah’s third biggest domestic destination and one presently being ignored by flyadeal. From an international perspective, a market which will see launches in the second half of 2018, Dubai and Cairo are significant considerations for the start-up LCC.