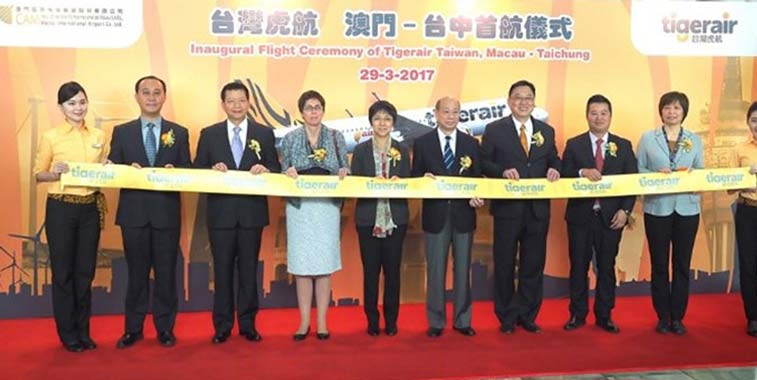 Tigerair Taiwan launched services in 2014 and became a wholly-owned subsidiary of China Airlines in 2017. In March this year the carrier launched its first service from Taichung, the 755-kilometre sector to Macau, which it serves daily. There was a ribbon cutting ceremony in Macau to celebrate the new route. The LCC operates from three airports in Taiwan, with its main base at Taipei Taoyuan.

Tigerair Taiwan is a Taiwan-based LCC that was launched as a joint venture between China Airlines and Tiger Airways Holdings. It began operations in September 2014 and in early 2017, the carrier became a wholly-owned subsidiary of China Airlines. Tigerair Taiwan operates a fleet of 10 A320s and is the fourth largest provider of published international capacity from Taiwan in 2017, behind only China Airlines, EVA Air and Cathay Pacific Airways.

OAG schedules show that Tigerair Taiwan will provide 2.55 million two-way seats serving the Taiwanese market in 2017. This is an increase of 38% compared to 2016. Over the same period the carrier has grown its available seat kilometres (ASKs) by 20%. 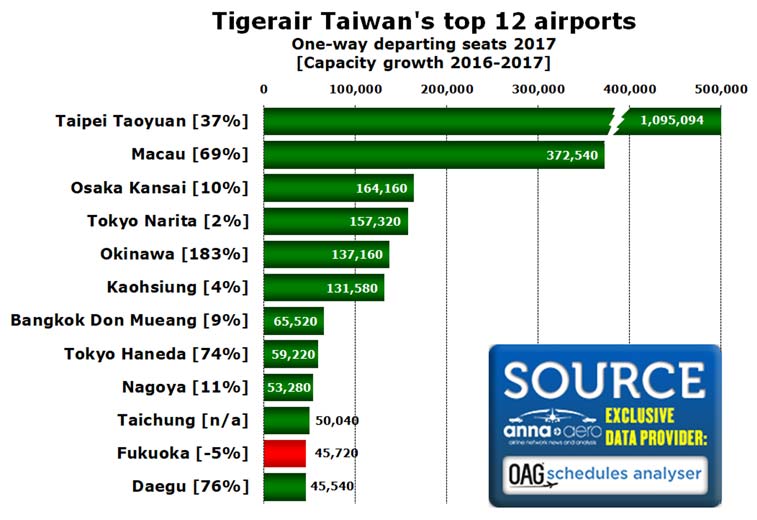 Taipei Taoyuan is Tigerair Taiwan’s main base, accounting for 43% of its departing seats in 2017. It has also seen capacity grow by more than a third since 2016. The vast majority of the LCC’s top 12 airports experienced a capacity increase in 2017 when compared to 2016. The strongest growth was seen at Okinawa, Daegu, Tokyo Haneda and Macau. Fukuoka (highlighted in red) was the only top 12 airport to experience a reduction in capacity since 2016. Taichung and Daegu were new entrants to the top 12 airports in 2017, while Singapore and Kota Kinabalu dropped out of the rankings, after the airline ceased services from Taoyuan to both destinations.

Tigerair Taiwan serves three airports in its home country, all of which feature in its top 12 origin points in 2017. In addition to its main base, Kaohsiung and Taichung are also served in Taiwan. The latter saw its first services launched in 2017, with a link to Macau. Six of the top ranked airports in 2017 are Japanese. Other country markets represented in the top 12 include Macau, Thailand and South Korea. 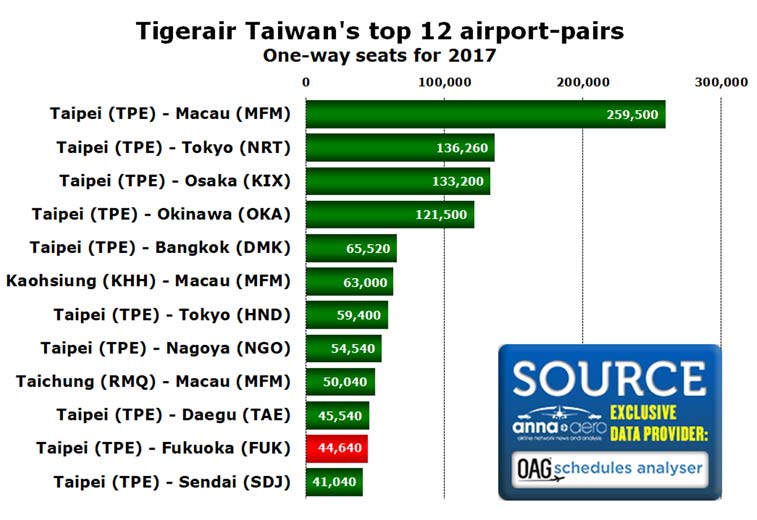 According to OAG schedules, Tigerair Taiwan has, or will, operate up to 21 airport pairs during 2017. All of the airline’s routes link Taiwan to international destinations. The LCC does not operate any domestic services. Japan is Tigerair Taiwan’s largest destination market, accounting for 57% of the airline’s capacity. The carrier serves nine Japanese airports from Taiwan,with direct links from Taoyuan and Kaohsiung. The next largest destination markets are Macau, which sees services from all three of the LCC’s Taiwanese airports, and Thailand, which is served via a link between Taoyuan and Bangkok Don Mueang.

Most of Tigerair Taiwan’s top 12 routes in 2017 originate from its main base and many link Taoyuan with Japan. The top ranked routes that have experienced the largest year-on-year growth are those from Taoyuan to Okinawa, Sendai and Daegu, which witnessed capacity increases of 150%, 109% and 76% respectively since 2016. The latter two routes were new entries to the top 12 in 2017, along with the link between Taichung and Macau. The only top ranked route which saw a cut in capacity was Taoyuan-Fukuoka (highlighted in red), which will see 7% less seats in 2017 compared to the previous year. The links between Taoyuan-Singapore and from Kaohsiung to Tokyo Narita and Osaka have dropped out of the top 12 since 2016. The Singapore sector was discontinued while the two Japanese links from Kaohsuing have experienced a reduction in capacity. Tigerair Taiwan has already launched five new routes in 2017 and will add another to its network from 18 December, when it begins operating Kaohsiung-Fukuoka. 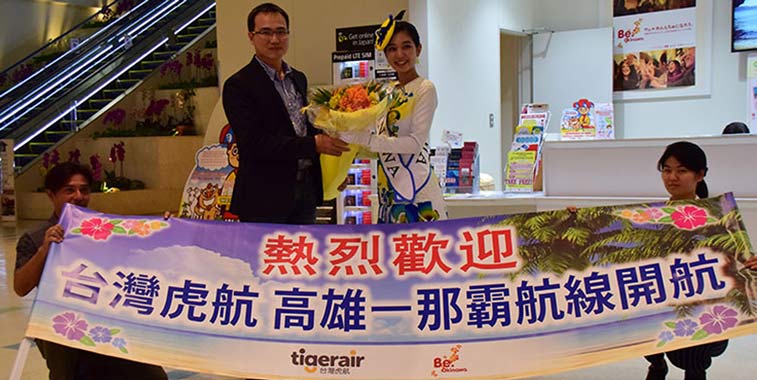 Tigerair Taiwan will operate up to 21 airport pairs during the course of 2017, all of which are international services. All of the airline’s flights link Taiwan to other destinations in the Asia Pacific region. In March, Tigerair Taiwan’s CFO Hansen Lin was joined by Miss Okinawa to celebrate a new route from Kaohsiung to Okinawa . The 838-kilometre route is one of nine links the Taiwanese LCC offers between its home market and Japan.