Aeroflot traffic up 14% so far this year; flew 29 million passengers in 2016; anna.aero joins carrier for a night at Manchester United 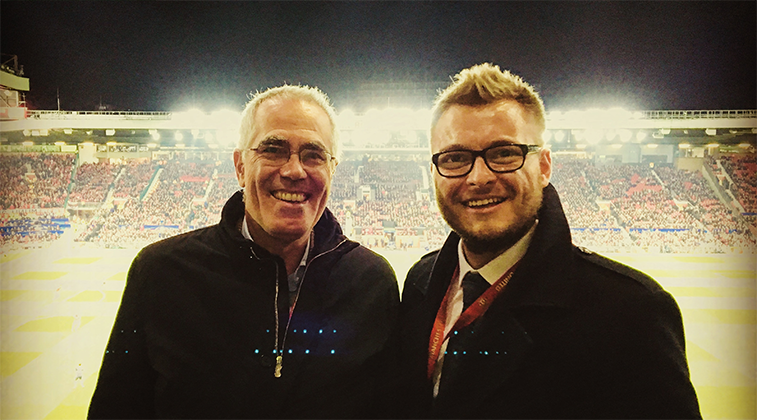 Aeroflot recently invited anna.aero to attend the UEFA Champions League match between Manchester United and S.L. Benfica at Old Trafford, a second-leg group stage game that the UK side won 2-0. Seen enjoying the game at Old Trafford are Aeroflot’s Deputy CEO Giorgio Callegari and anna.aero’s Assistant Editor Jonathan Ford. The Russian flag carrier is reporting strong traffic growth for 2017, with passenger numbers between January and September this year up 14% to 24.8 million. This compares to the 21.7 million that the SkyTeam member flew in the same period last year.

The Aeroflot Group, made-up of Aeroflot itself along with Pobeda, Rossiya Airlines and Aurora Airlines, flew 43.4 million passengers in 2016, up by over 10% when compared to the 39.4 million the collective transported in 2015. Of the group’s total passengers, just under 67% travelled on Aeroflot last year, the same ratio that the Russian flag carrier held in 2015. As of 1 November Aeroflot, excluding other group carriers, has 214 aircraft, with an average fleet age of 4.1 years. “This makes the airline’s fleet one of the youngest in the world,” comments Aeroflot’s Deputy CEO Giorgio Callegari at a joint Aeroflot-Manchester United press conference discussing the two companies’ successful partnership. Taking into account the whole group, the average fleet age is 6.4 years. The current Aeroflot fleet is made-up of: 16 777-300s; 33 737-800s; 17 A330-300s; five A330-200s; 38 A321s; 73 A320s; and 32 SSJ 100s.

24.8 million passengers through to September 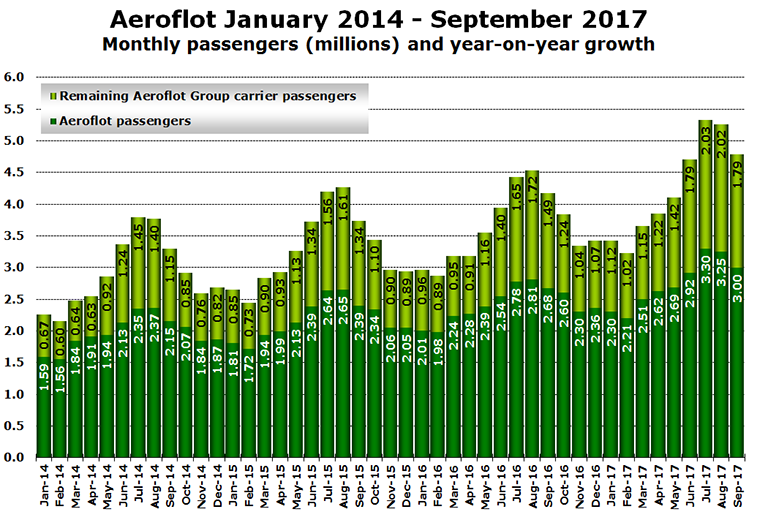 It would appear that the group is growing at an aggressive rate. For the whole of 2014, the airline group handled 34.7 million passengers, while for the first nine months of this year alone it has transported 38.3 million, meaning that all four airlines have already flown 3.6 million more passengers during Q1 to Q3 this year than they did in all of 2014.

For this first nine months of 2017, the best month for Aeroflot was July, with traffic during month seven of this year growing by 19%. For the group’s other three carriers the best month was April, with traffic up in month four by 35%. If we take the average being seen so far in 2017 and apply it for the remainder of the year, then Aeroflot should carrier just over 33 million passengers in 2017, with the remaining three carriers combined flying just under 16.5 million, giving a group total for the year of 49.5 million.

This year Aeroflot, not including other group affiliates, has increased seat capacity from its leading hub at Moscow Sheremetyevo by 15%, with the SkyTeam member offering over 21 million seats from its largest Russian capital airport operation. The airline’s second largest airport operation is St. Petersburg, where a majority of flights are operated by Rossiya Airlines under an Aeroflot flight code, with the second city of Russia seeing a 17% increase in annual seats from Aeroflot in 2017. 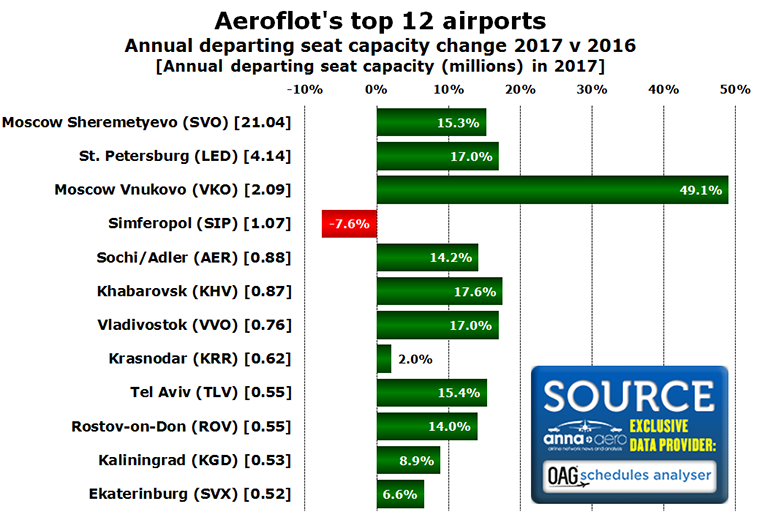 Of the airport’s in the top 12, only one has seen a reduction in capacity, with Simferopol witnessing a 7.6% reduction in annual departing seats. When it comes to adding new destinations, Aeroflot is perhaps more reserved than other hub carriers, concentrating on increasing capacity and frequency on existing services. This is evident with the carrier announcing increased frequencies to airports such as Budapest (increasing to three times daily) and Istanbul Atatürk (increasing to four times daily) from Sheremetyevo this winter. This trend is also being observed in the domestic market, with routes from Sheremetyevo to Chelyabinsk, Krasnoyarsk, Perm, Rostov-on-Don and Surgut also seeing frequency increases. “We don’t want to see more than 40%-50% of our traffic being connecting as we lose focus on the Russian market,” informs Callegari. “We are heavily investing in point-to-point passengers, this is why we are adding frequencies to existing services rather than adding many new destinations at a time.”

An evening at Manchester United

On 31 October anna.aero was kindly invited by Aeroflot to join the airline for an evening at Old Trafford to watch Manchester United take on S.L. Benfica in their second-leg group stage game of the Champions League. Although at heart he is a West Ham United fan, anna.aero’s Assistant Editor Jonathan Ford was the lucky recipient of the invite from the Russian flag carrier, with him soon on his way up to Manchester. The UK side had beaten the Portuguese team 1-0 during the first-leg match two weeks before in Lisbon, thanks to a goal from Marcus Rashford in the 64th minute. The second-leg game was also a victory for the Theatre of Dreams occupants, with Manchester United winning 2-0 thanks to goals from Marcus Rashford, scoring on his 20th birthday, albeit a deflection from S.L. Benfica goalkeeper Mile Svilar, with another coming from Daley Blind with a 78th minute penalty. Much to Ford’s delight however, Svilar denied Anthony Martial a goal in the 15th minute by saving his penalty. Before the football however, anna.aero was invited to attend a presentation at the Radisson Blu in Manchester (where S.L. Benfica was also staying) to sit in on a presentation which looked at the successful partnership of Aeroflot and Manchester United. 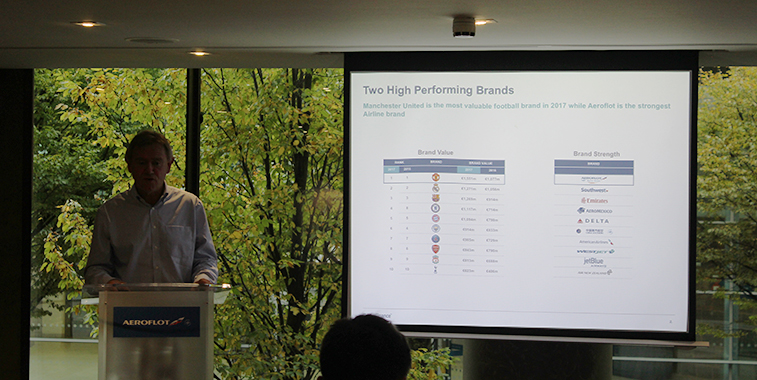 At the event promoting Aeroflot’s partnership with Manchester United, David Haigh, CEO of Brand Finance gave a presentation on the power that both the airline and football club’s branding has on a global scale. With regards to football, Manchester United has a brand value of over €1.55 billion in 2017, up from just under €1.08 billion in 2016, confirming that in relation to football club brand values, Manchester United is number one in the world, with Real Madrid (€1.27 billion in 2017) second. Turning to Aeroflot with regards to airline brands, Haigh confirmed that Aeroflot was the leading airline brand in 2017, with Southwest Airlines in second and Emirates third. “Aeroflot has been around since 1923, and Manchester United over 100 years,” commented Haigh. “They have been around for a long time, and public opinion takes time to adjust,” he comments on Aeroflot’s developments. “By the carrier strongly growing its marketing campaign in the London market, the rest will follow, and that is exactly what is happening with their successful marketing in the capital.” When it comes to Brand Finance’s evaluation of airlines, it takes into consideration inputs and outputs, with inputs including age of fleet and search engine results, with outputs taking into account factors such as carrier profit and shares. 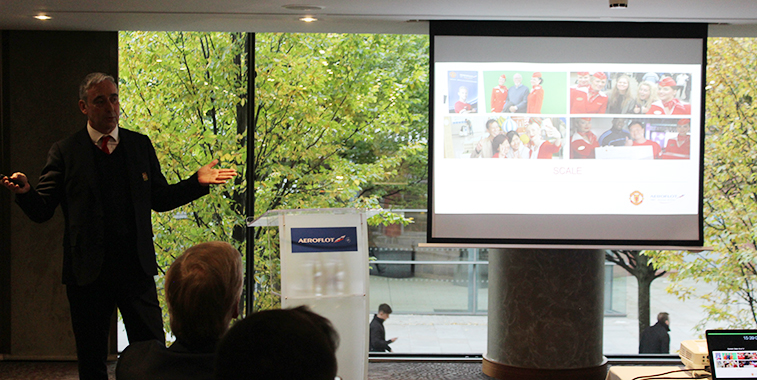 Second to speak in the Aeroflot-Manchester United presentation was Sean Jefferson, Director of Partnerships, Manchester United. “We believe that this is one of the strongest football sponsor partnerships in the world,” commented Jefferson. “We both have a shared ambition, and we both see each other as brands with great potential for more growth and extending our current lead over other partnerships.” One example that Jefferson made was in the football club’s aspiration to further enhance its brand in the Asian market, particularly China. “China is a growing area for both companies, and we want to further enhance our reach into that market which we believe Aeroflot will be able to help us with.” 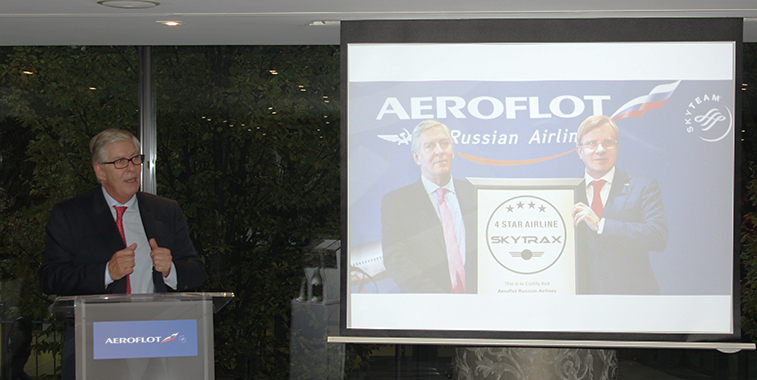 The penultimate speaker of the afternoon before heading to Old Trafford was Edward Plaisted, CEO of Skytrax. “Skytrax ratings are used to rectify the impression of sense and service of a carrier,” comments Plaisted. Currently Aeroflot is a four-star airline under our ranking system, and it has ambitions to become a five-star airline, an achievement that is hard to come by. Airlines that improve their quality and service, whilst also maintaining the changes, plus improve yields, will see the greater benefits. We cannot stand still, it is a world of continual change and airlines need to recognise that.” 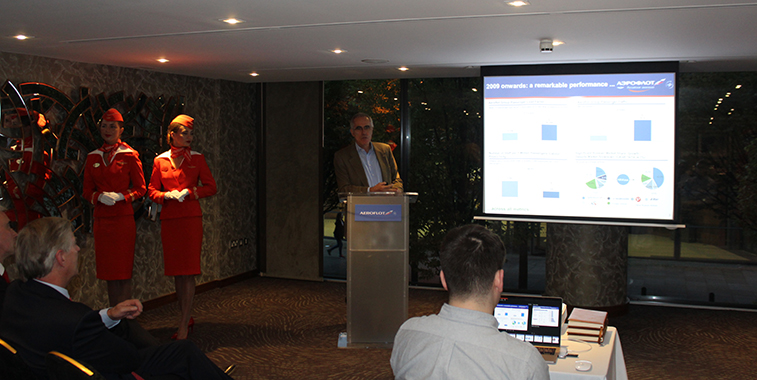 Last to speak at the conference was Aeroflot’s Deputy CEO Giorgio Callegari. “In 2009 the group flew 11 million passengers, while last year we carried 43.4 million, showing how fast we are growing. What we have also done in that time is to consolidate the fleet from 18 types of aircraft to just seven, with the fleet of the Aeroflot Group now boasting 292 aircraft.” Callegari also mentioned that the A350s that will be joining the Aeroflot fleet from 2019 onwards will all be fitted with the same seat configuration, with no aircraft being distinctively set-up for different market types.