Franco-German market returns to growth after several years of decline, Lufthansa is the largest carrier but LCCs lead the charge 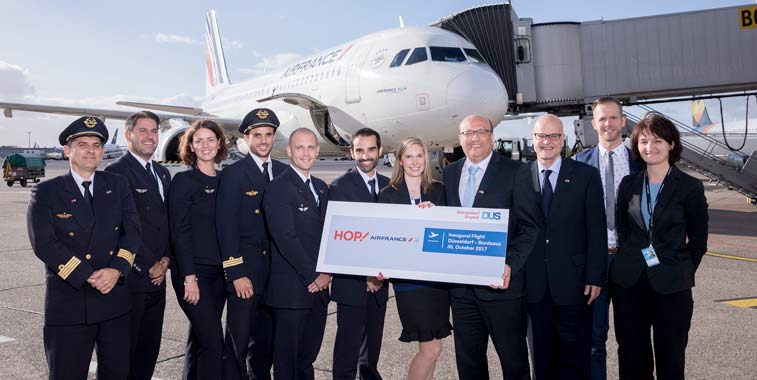 Five routes have already been launched between France and Germany in 2017 with another due to commence before the end of the year. Most of these new services involve point-to-point links between non-hub airports. Düsseldorf Airport celebrated the launch of HOP! services from Bordeaux on 30 October.

Germany and France have the largest populations in Western Europe and are home to two of the most developed economies in the world. They are also home to two of the longest running legacy airline brands in Lufthansa and Air France. It is not a surprise then that there is a well-developed network of air services between these neighbouring nations. 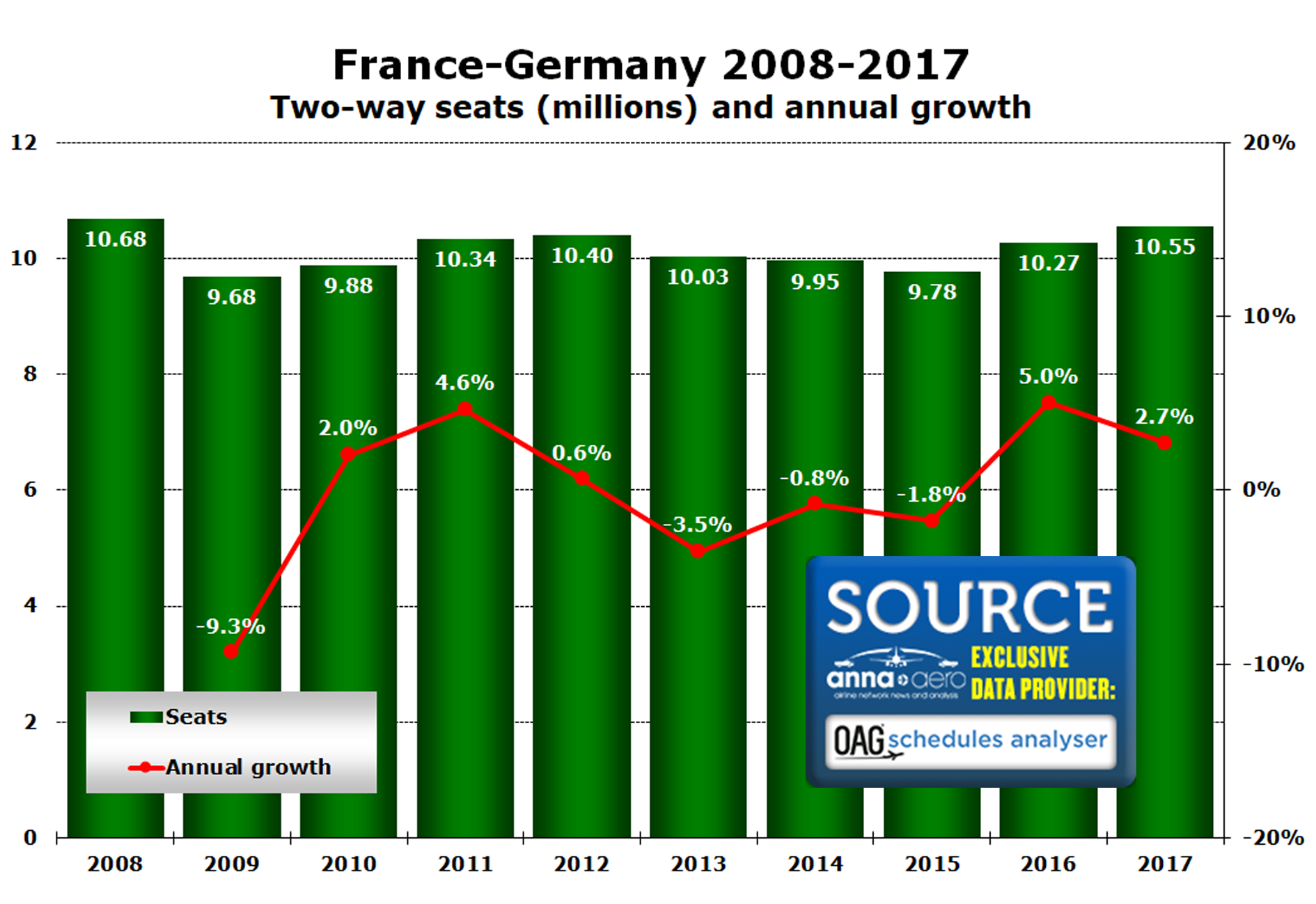 There will be 1.2% less seats available on flights between between France and Germany in 2017 than there were in 2008. Capacity fell by more than 9% from 2008-2009 as airlines responded to the global economic crisis by axing seats. The market has never quite recovered to 2008 levels. Three years of modest growth saw capacity increase by 7.5% from 2009-2012, before seat numbers faced three years of consecutive cuts, subsequently decreasing by 6% from 2012 to 2015.

The past two years have seen the Franco-German market return to growth, with capacity increasing by 7.9%. However, following the collapse of airberlin, which operated its last flight in October, it remains to be seen whether the positive growth trend can continue into 2018. Reviewing OAG schedule data reveals that airberlin had around 170,000 one-way annual seats in the France-Germany country pair in 2017. 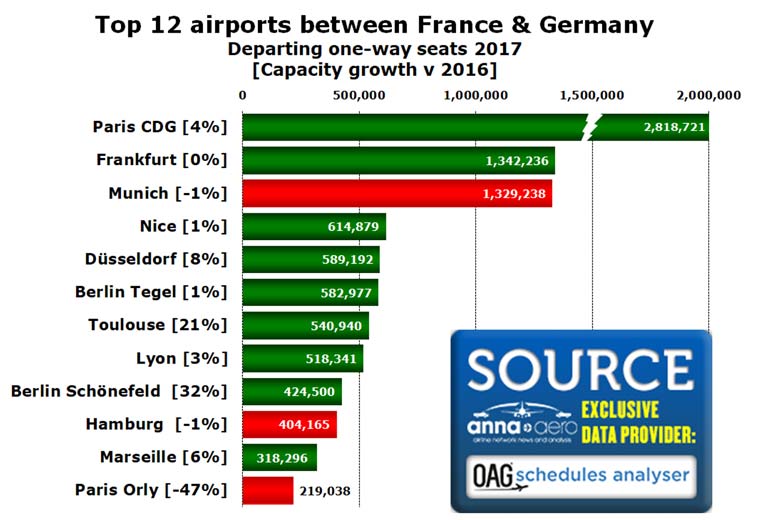 The top 12 origin airports for services between France and Germany in 2017 are split evenly with six from each country. There are three large hubs in this market, Air France’s main base at Paris CDG, and Lufthansa’s two hubs at Frankfurt and Munich. Unsurprisingly, these hubs are the largest airports for departing capacity in the Franco-German market in 2017, accounting for more than half of the available seats between them.

Berlin Schönefeld and Toulouse are the top ranked airports with the strongest year-on-year growth in capacity between France and Germany since 2016, with 32% and 21% increases in seat numbers respectively. Outside of the top 12, Nantes and Bordeaux saw the largest growth in Franco-German capacity with increases of 158% and 88%. The top ranked airport that witnessed the biggest capacity cull was Paris Orly, which experienced reduced frequencies on German links operated by easyJet and Transavia, as well as a loss of capacity from airberlin which ended services to Berlin Tegel in March, seven months before ceasing operations completely. Amongst the three main hub airports, only Paris CDG experienced growth on German connections in 2017, with Frankfurt’s capacity in this market remaining static and Munich seeing a minor reduction in seats. 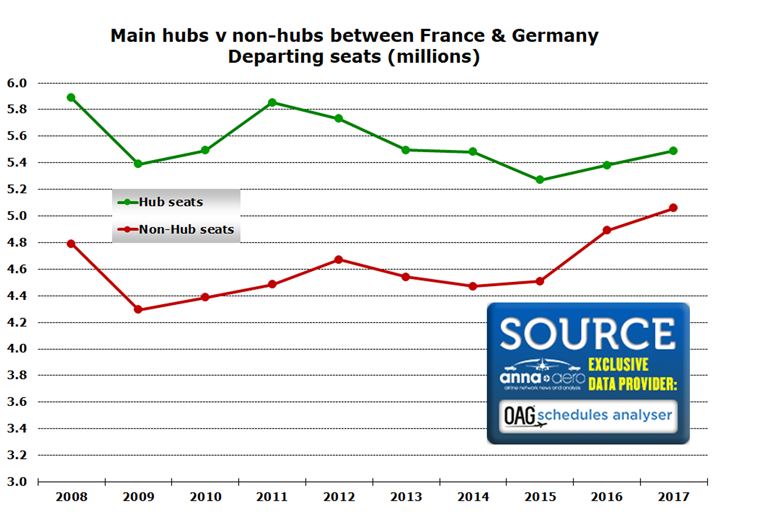 About 5.5 million departing seats will be operated from the three main hubs in the Franco-German market in 2017. Paris CDG, Frankfurt and Munich clearly maintain a dominant position for flights between the near neighbours, but in recent years, non-hub airports have observed stronger percentage growth in departing seats. In 2008 the three hubs accounted for 55% of all departing seats between France and Germany. Their market share increased to 57% in 2011, but has since decreased to 52% in 2017. Between 2015-2017 the number of departing seats offered from one of the three hubs increased by 4%. During the same period the capacity on offer from non-hub airports increased by 12%.

New route trends in 2017 suggest a focus on adding point-to-point services between non-hub airports. Five new routes were opened from France to Germany up to the end of October, of which, only Air France’s link from Bordeaux to Frankfurt connects to a main hub. One further route is due to be launched by Aigle Azur in December, linking the non-hub airports of Paris Orly and Berlin Schönefeld. 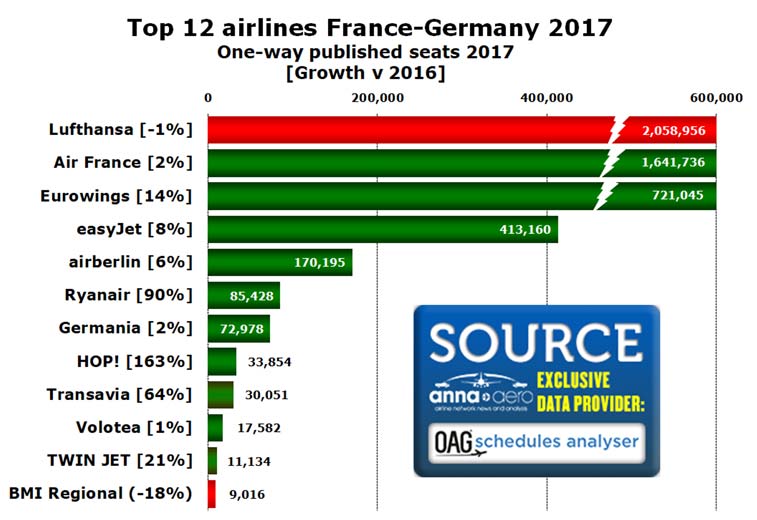 Lufthansa and Air France will provide 70% of the one-way seats available from France to Germany in 2017, but they have experienced weaker year-on-year growth than the majority of top ranked carriers in this market. HOP! saw the strongest percentage growth, albeit from a small traffic base, after adding more frequencies on its existing services and introducing new routes. The next largest growth came from LCCs including Ryanair and Transavia. Eurowings also witnessed strong growth, but some of this is a result of the phased transfer of services formerly operated by germanwings. The combined published capacity of both carriers still grew by 14% from 2016 to 2017. OAG schedules suggest that 1 November marked the final flights to be operated under the germanwings 4U flight code.

Lufthansa (marked in red) saw a modest reduction in capacity, while airberlin increased the seats on offer from France to Germany in 2017, before ceasing operations at the end of the summer season. The defunct carrier accounted for 3% of the capacity on offer from France to Germany in 2017, with services from Berlin Tegel to Paris CDG and Paris Orly, and Düsseldorfto Nice. It is unclear how much of this capacity will be directly replaced, but the Paris CDG-Berlin Tegel and Nice-Düsseldorf routes are already served by other carriers, and Aigle Azur has moved to launch services from Paris Orly-Berlin Tegel, which begins in December. 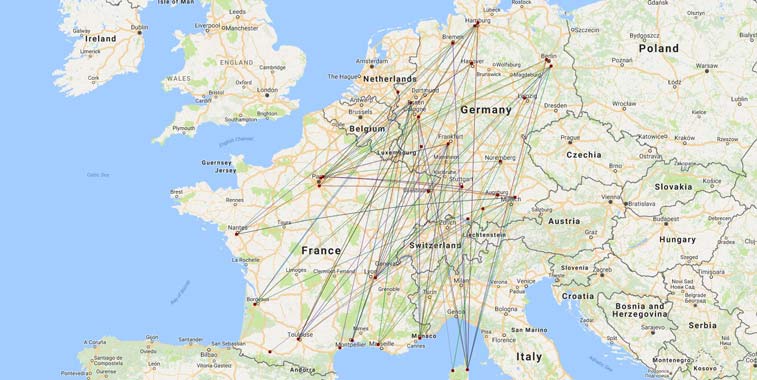 The route map for services between France and Germany for 2017 shows how connections stretch from Hamburg in the North, to the island of Corsica in the south. More than 10.5 million seats will be available between the European neighbours in 2017.  Capacity has increased by nearly 8% over the past two years.