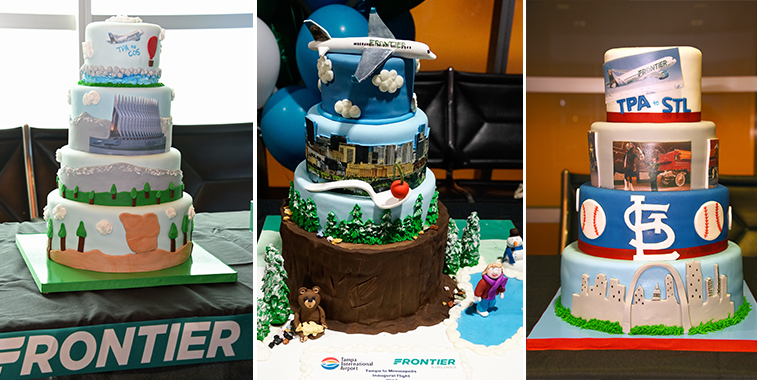 Talk about having your cake and eating it! Frontier Airlines has been very busy in the Floridian market this year, having recently launched multiple flights from various airports in the Sunshine State, including Tampa, which has baked a few calorific creations for the airline this year, including the three above. Because of the ULCC’s expansion in the southern US state, it is the leading airline for growth, with its seat capacity from Florida this year up 33% when compared to its 2016 offering. As a result, Frontier is Florida’s eighth largest airline.

With a population of around 20.61 million, Florida is the US’ third largest state in regards to inhabitants, overtaking New York State somewhere between July 2013 and July 2014 according to US Census Bureau data (the North East US state is home to around 19.75 million). Florida sits behind Texas on 27.86 million in second, while California is still way out in front on 39.25 million. With Florida now being home to 20.61 million people, it means that 6.4% of the nation’s dwellers now reside in the Sunshine State.

When referring to the Bureau of Transportation Statistics (BTS), some 823 million passengers travelled in the US last year, with 87% of the market flying on domestic services. Last year, data from BTS and individual airports state that 168 million passengers passed through Florida’s top 20 airports in 2016, up from 161 million in 2015. So while the state is only home to 6.4% of the population, it is responsible for generating over 20% of the country’s passengers.

Miami, Orlando, Fort Lauderdale and Tampa combined handled just under 135 million passengers in 2016, resulting in the big four occupying close to 80% of Florida’s total traffic last year. To give an idea of their domination, despite regional airports in the state thriving in recent years, the top four back in 2007 still had 79% of traffic, meaning even with regional airports growing fast, the four major points of entry into Florida are still maintaining a high market share of the state’s passengers. However, the regional markets are seeing some of the biggest passenger traffic increases, with the leading airports for growth in Florida last year including Punta Gorda (34%), St. Augustine (30%), Destin-Fort Walton (18%), Daytona Beach (17%), St. Pete-Clearwater (12%) and Orlando Sanford (11%). 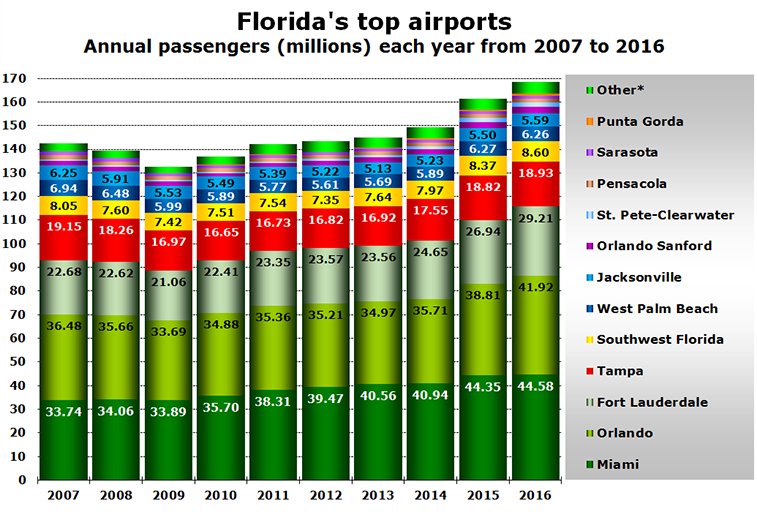 When looking at combined airport totals, the best year for growth in Florida during recent years was 2015, with the state seeing a 8.2% increase in traffic when compared to 2014. The increase meant that in 2015 Florida’s airports processed 12.22 million more passengers than they did in the previous year, while in 2016 the net increase in passengers was just over seven million. The leading airport for growth in 2015 was Punta Gorda, with it seeing a 33% upswing in traffic when compared to 2014. Other leading airports for traffic increases in 2015 also included St. Pete-Clearwater (32%), Orlando Sanford (14%), St. Augustine (12%), Fort Lauderdale and Northwest Florida Beaches (both 9.3%) respectively.

Like most airports in the US, capacity growth appears to be largely driven by the expansion of ULCCs, and that is certainly the case when it comes to Florida’s airports, with the three fastest growing airlines in the state’s top 12 being Frontier Airlines (30% increase in annual departing seats), Spirit Airlines (26%) and Allegiant Air (16%). With the rise of Spirit Airlines’ capacity, it means that the Fort Lauderdale-based ULCC has now overtaken United Airlines to become Florida’s fifth largest airline, and leading ULCC. Noteworthy is the reduction in available seats from American Airlines, with the Sunshine State’s leading carrier posting a 0.6% decline in seats this year when compared to 2016. 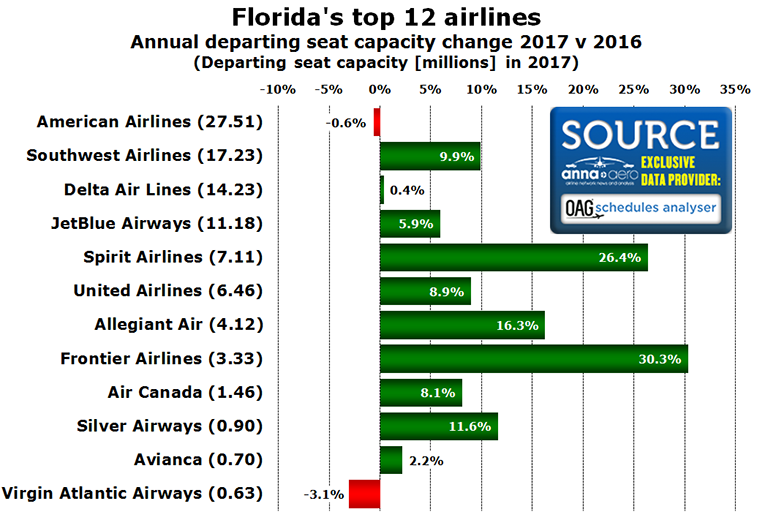 With Canada (3.39 million tourists to Florida in 2016) and the UK (1.59 million) being the leading international tourist visitors to Florida, it comes as no shock to see airlines from the transborder and transatlantic markets making it into Florida’s top 12 airlines. In 2017 Air Canada is posting a reasonable 8.1% increase in seats to Florida this year, while with regards to the UK market, Virgin Atlantic Airways is providing a 3.1% reduction in annual capacity. However, despite Virgin Atlantic’s chopping, British Airways (Florida’s 15th largest airline) is forecasting a 2.5% rise in seats this year, with Thomas Cook Airlines (32nd) showing a 5.0% increase and TUI Airways’ (formerly Thomson Airways; 44th) capacity has climbed by 6.9%. Norwegian, which has London Gatwick to Orlando and Fort Lauderdale services among its Floridian routes, is also showing strong gains in the market, with the US state’s 24th biggest carrier reporting a 53% growth in annual seats this year. Among the new airline entrants to the Floridian market this year are El Al, which has recently reinstated flights between Tel Aviv and Miami, and WOW air which now connects Reykjavik/Keflavik to Miami. 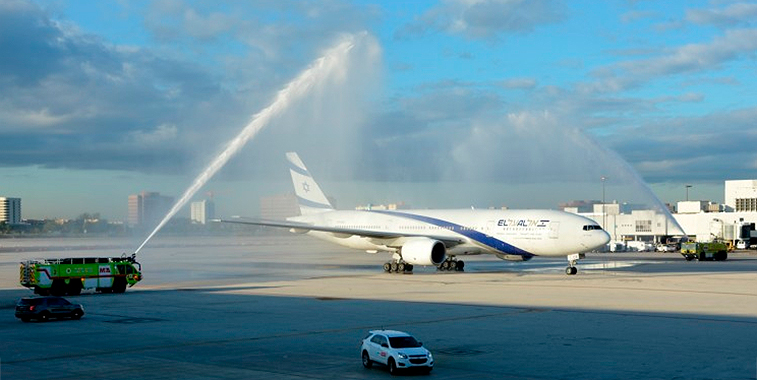 El Al recently restarted flights to Miami from Tel Aviv, making the Israeli flag carrier the latest airline to enter the Florida market. Last year Miami welcomed 44.58 million passengers, while all of Florida’s leading airports combined processed 168 million, a 4.4% increase over the total of 161 million in 2015.