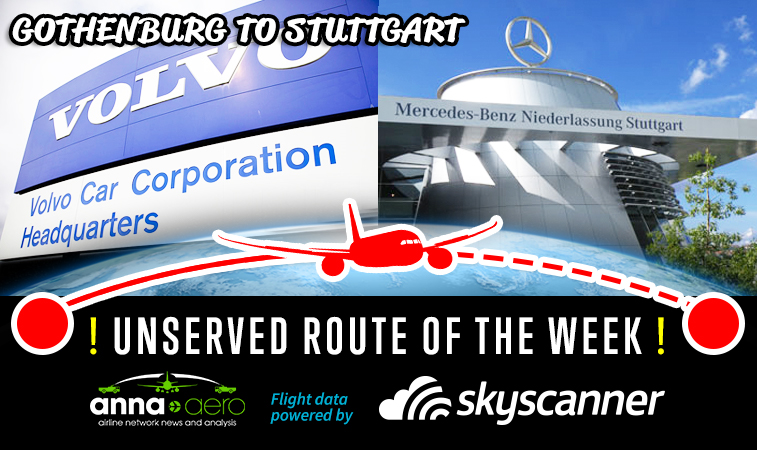 Vroom! For a new airline operating a business schedule between these two automotive cities – the homes of Volvo and Mercedes-Benz – there would be no end of suits filling the front cabin. “Any new route needs a carrier that fills the point-to-point gap between those two cities, with a high enough frequency that satisfies business demands,” informs states Elizabeth Axtelius, Director Aviation Business, Swedavia.

With around 40,000 searches in the last year, a potential city pair from Gothenburg to Stuttgart has been identified as this week’s “Skyscanner-anna.aero Unserved Route of Week” – a powerful analysis based on aspirational data captured from the Skyscanner.net flight comparison site used by +60 million unique visitors per month. “Stuttgart is one of the best unserved European routes from Gotheburg. During the past two years traffic volumes have grown by 100%,” states Elizabeth Axtelius, Director Aviation Business, Swedavia. “There is high demand, especially from the business segment. Additionally there is an under stimulated leisure market, with a significant VFR demand.” 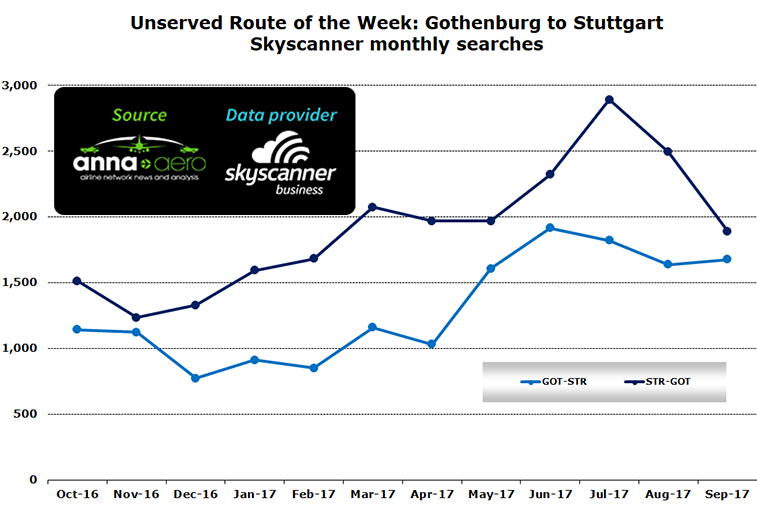 anna.aero suggests Eurowings or SAS to start this service

Skyscanner demand on this week’s unserved route shows a preference towards the Stuttgart end of the city pair, with a 59/41 split, so on this basis we looked at potential carriers at the German origin first. According to OAG schedules for the week commencing 13 November, the largest carrier at Stuttgart is Eurowings (45% share of weekly seats). Despite offering a 31-destination non-stop network from the airport, presently the LCC does not operate any routes into the Nordic region. However it does serve Gothenburg from another one of its bases, flying an 11 times weekly service from Düsseldorf. Additionally, Eurowings has a reasonable presence in Sweden overall, with Stockholm Arlanda connected to Hamburg and Düsseldorf (both 12 times weekly). Reflecting on this information, the airline clearly has a strategy to serve business markets between the two countries with a frequency suitable for business traffic, and a route from Stuttgart to Gothenburg would seemingly fit into this existing network philosophy.

Stuttgart’s second biggest carrier is Lufthansa (7.2% share of weekly capacity), offering over 8,000 one-way weekly seats, but only to Frankfurt and Munich. This network approach from the Star Alliance carrier is typical for secondary German airports, with the mainline carrier focussed on feeding its hubs and leaving the point-to-point flying to its subsidiaries. On this basis, Lufthansa should not be considered as a likely target airline on this potential city pair, despite the compelling information Axtelius has access to. “Currently mainly Germans are travelling on the route. This means great inbound traffic to Sweden, as well as a good opportunity to stimulate Swedish traffic.”

Considering the Swedish end of the route, the airport’s #1 capacity provider of its 29 current serving carriers is SAS, controlling 21% of weekly seats. Germany is Gothenburg’s second largest country market, behind only the domestic market, with SAS operating extensively between the two, flying to Frankfurt (35 times weekly), Munich (21), Düsseldorf (11) and Hamburg (six). Given its presence in the market, the Star Alliance carrier could legitimately make a business case for a Gothenburg–Stuttgart sector to be added to its S18 flying programme over the coming months, especially having now had the benefit of this compelling Skyscanner data.

When looking at the previous year of search data, the busiest month for potential traffic flows (for both directions on the route combined) is July 2017, with over 4,700 searches, 2,600 higher than the lowest monthly figure, which was recorded in December 2016 (2,100 searches). “There are good base volumes during all seasons, and either side of the city pair has good preconditions for year-round traffic,” suggests Axtelius.

According to OAG Traffic Analyser, because there is no direct service, the top three connecting options chosen by those passengers who did book travel between Gothenburg and Stuttgart in the last 12 months (year ending August 2017) indicates that the majority of connecting travellers used Berlin Tegel (42%), Frankfurt (20.4%) and Copenhagen (19.6%). Looking at the traffic flows in the opposite direction, Tegel remains top, but the German and Danish hubs swap places when reviewing travellers originating in Stuttgart. “Over the past few years, most transfer volumes were through Berlin Tegel with airberlin, something which would have hindered a new non-stop entrant, as it was a smooth transfer product at low prices with airberlin,” informs Axtelius.

With a lack of direct services, travellers between these two cities have clearly got used to these one-stop alternatives. However, the market demand is extremely buoyant – as the graph below shows, with 9.8% of the Skyscanner searches for these indirect Gothenburg to Stuttgart services converted into ticket sales – that’s more than the average 7.3% achieved for Skyscanner conversion/purchase rates for all direct routes available from either Gothenburg or Stuttgart. However, with nearly 40,000 annual searches, a five or six times weekly service should be immediately viable for the airline selecting to start this potential city pair. “A new service would connect two metropoles with great business power. Germany is extremely important for exports/imports from/to the Gothenburg region. Any new route needs a carrier that fills the point-to-point gap between those two cities, with a high enough frequency that satisfies business demands,” concludes Axtelius. 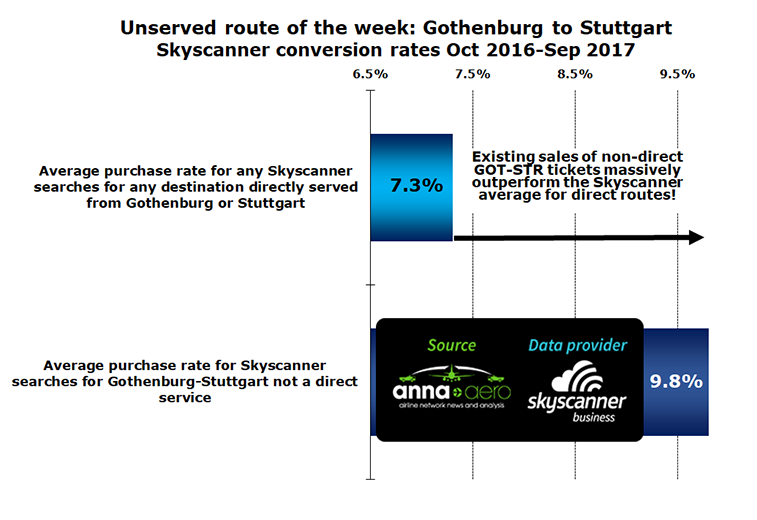