Iasi Airport celebrated the arrival of its one millionth passenger of 2017 on 13 November. The lucky recipient was travelling on a Blue Air flight from the Romanian airport to Cologne Bonn. Seen presenting her with a reward for being the one millionth passenger, a one-year subscription with unlimited tickets from Iasi on Blue Air, are Alexandru Anghel, General Director, Iasi Airport and Vlad Cristescu, Senior Network Development Executive, Blue Air. Along with the prize giving, there was also a cake, live band and speakers presentation. 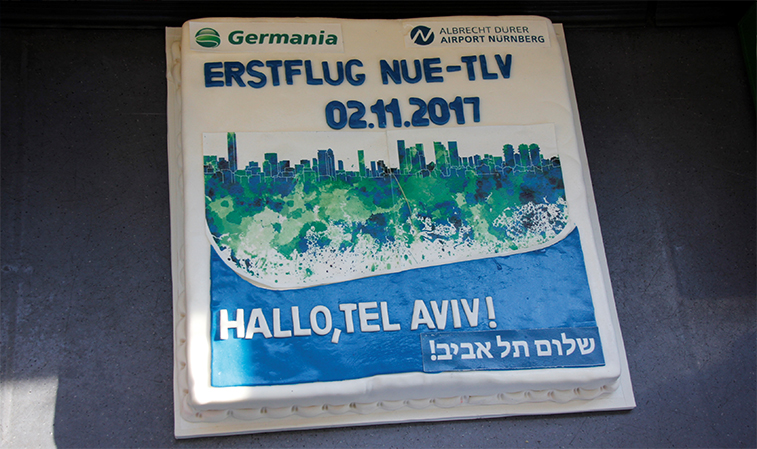 On 2 November Germania celebrated the launch of flights between Nuremberg and Tel Aviv, with the inauguration of the route also including this cake. The 2,768-kilometre sector will be flown by the airline twice-weekly (Mondays and Thursdays) on its fleet of A319s when referring to OAG schedules, with the route facing no direct competition. On 12 November around 100 people raced across one of Sydney’s iconic runways as the airport officially launched its Community Christmas Giving Appeal in partnership with Cure Cancer Australia. One of the most exciting community sporting and charity events of the year, the Sydney Runway Run gives members of the public the unique opportunity to access the airfield and raise funds for charity. Sydney Airport MD and CEO Kerrie Mather, who presented the children’s winner with their prize, said the Runway Run is a highlight of the airport’s Christmas calendar. The overall winner was presented with their award by CEO of Cure Cancer Australia Floyd Larsen. For your chance to take part in a runway run, you can sign-up for the sixth anna.aero-Budapest Airport Runway Run taking place 1 September 2017 early in the new year. On 29 October, Eurowings began flights between Vienna and Dortmund, however the route celebration took place on 10 November. Among those at the launch of Eurowings’ new service between Dortmund and Vienna were: Wulf-Christian Ehrich, Deputy MD of the IHK Dortmund; Udo Mager, MD Dortmund Airport; and Dr. Jörg Beissel, MD and CFO of Eurowings. The LCC will offer six weekly flights on the 745-kilometre Austria–Germany city pair using its fleet of A320s. No other carrier currently operates the route. Saudi Arabian Airlines was recently awarded the ‘Best UK Hajj Airline’ for the second consecutive year, at the ‘2017 UK Hajj and Umrah Excellence Awards’ held at the Montcalm Hotel in Central London. CEO of Council of British Hajjis Rashid Mogradia presented the award to Saudi Arabian Airlines’ VP of Corporate Communications Abdulrahman Altayeb.To celebrate the acheivement, the following day the airline held a celebration on its stand at the World Travel Market (WTM) 2017 at London’s ExCeL centre, with the partying also including a special cake. The airline operates a trio of routes between the UK and Saudi Arabia. Non-stop daily services to both Riyadh and Jeddah are operated from London Heathrow with 777-300s, in addition to a five times weekly operation from Jeddah to Machester flown on 787-9s. 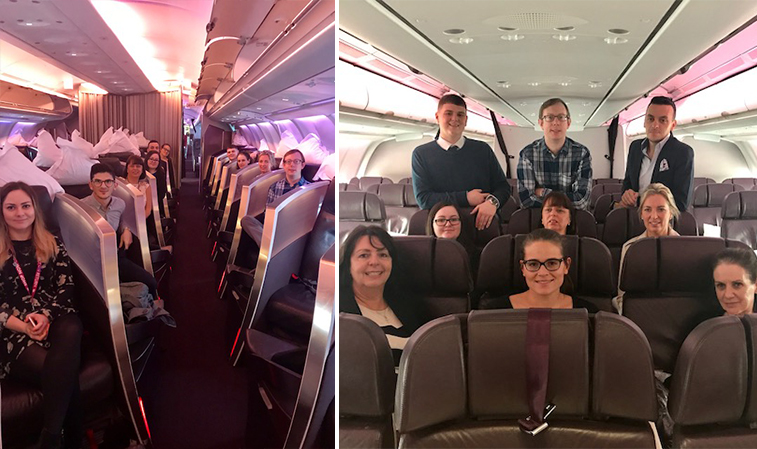 Last week, local travel agents from Northern Ireland took part in a fam trip, hosted by Belfast City Airport, to Manchester Airport, to experience the fast, convenient connection process. Flying to Manchester on Flybe, agents met with Virgin Atlantic Airways representative Anne Selby on board an aircraft and heard about the airline’s extensive route network via Manchester. The group was also hosted by Nico Spyrou and Emma Stone of Manchester Airport. Diane Risk, Travel Trade Consultant at Belfast City Airport, said: “These trips are a hugely important component in developing relationships with our travel trade partners, who we work with closely throughout the year. Manchester Airport is an important hub for passengers, attracting over 27 million passengers per year. Nearly 42,000 of these passengers are from Northern Ireland and use the airport to connect to over 200 worldwide destinations. Providing agents with the opportunity to actually experience the product is advantageous for them when selling on and finding the best travel solutions for customers.” 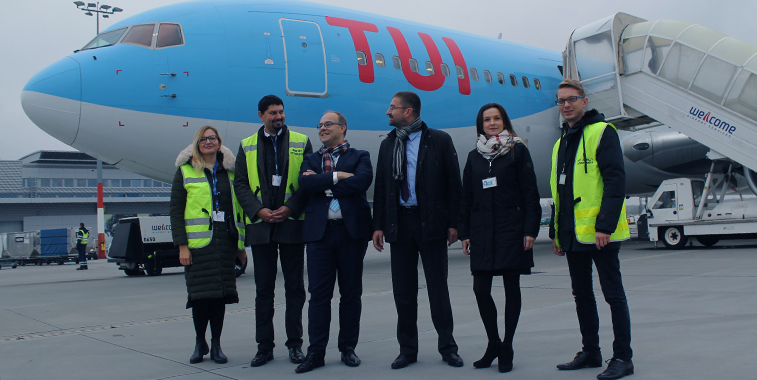 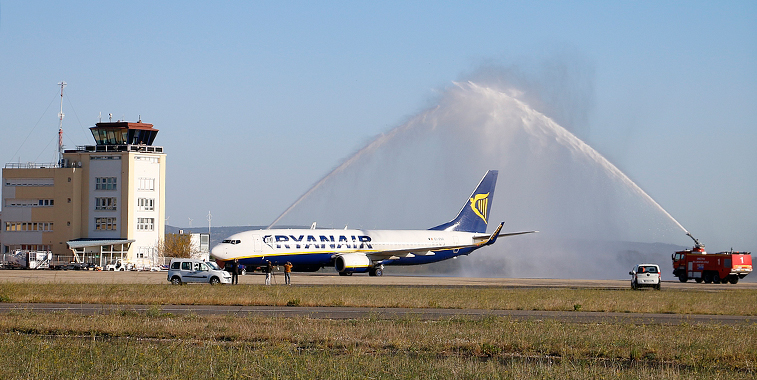 Ryanair launched flights between Marrakech and Perpignan on 31 October, with the French airport celebrating the launch by greeting the first flight with a water arch salute. A total of 141 passengers were on the first inbound flight according to the French airport, while the outbound service had 171 passengers on-board. The first four flights on the route in total carried 1,327 passengers, representing an average load factor of just under 88%. 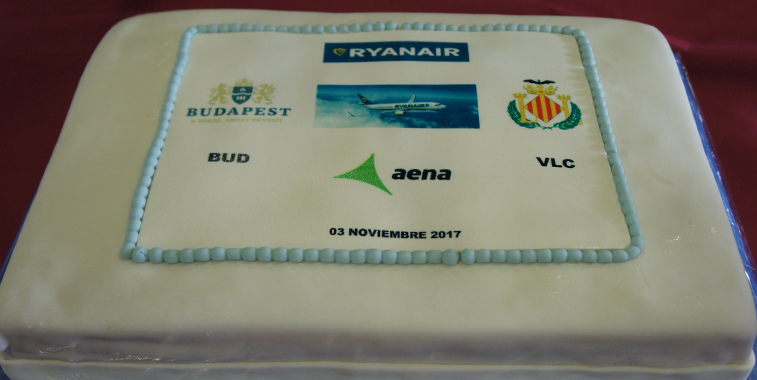 Valencia Airport celebrated the launch of Ryanair flights to Budapest on 3 November with this elegant cake. The ULCC will offer twice-weekly (Mondays and Fridays) flight on the 1,812-kilometre sector.