Punta Cana expansion slows since 2015, American Airlines is largest carrier and March is the peak month for available seats 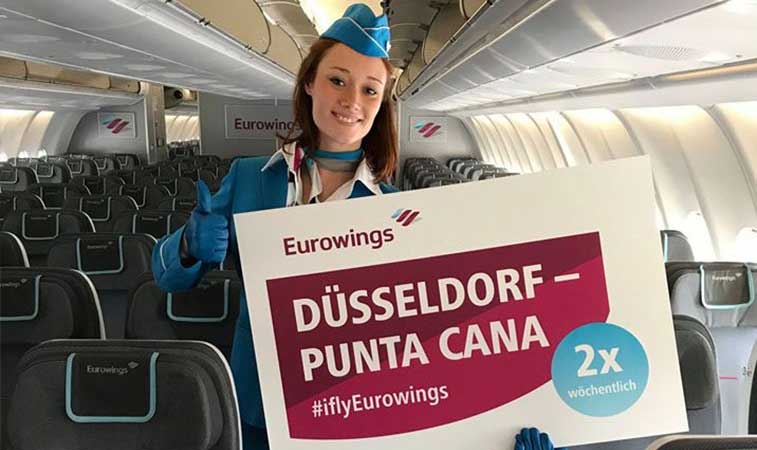 There will be more than 3.6 million seats available from Punta Cana in 2017. Six new routes have already launched to the airport this year and a seventh will be added in December. Eurowings celebrated the launch of a twice-weekly, 7,376-kilometre sector from Düsseldorf on 8 November. The previous week, fellow German carrier started its own services on the same airport pair.

The Dominican Republic is a Caribbean state whose closest neighbours are Haiti and the nearby island of Puerto Rico. More than 3.6 million seats are available on services from the nation’s Punta Cana Airport in 2017. The vast majority, if not all of these will be on international services. OAG schedules show that 1.5% of departing capacity will operate to domestic destinations, namely triangular services to Santo Domingo with Air France, and Puerto Plata with Condor. However, neither of these routes is available for sale on the respective airline websites.

Punta Cana witnessed an explosion in capacity at the turn of the decade, with six straight years of double-digit growth from 2010. The number of one-way seats available increased by 154% from 2009-2015. Perhaps inevitably, this rate of growth could not be maintained and between 2015-2017, capacity increased by a more sedate 1.4%. The average capacity per departing flight increased from 181 to 194 seats from 2008-2017. 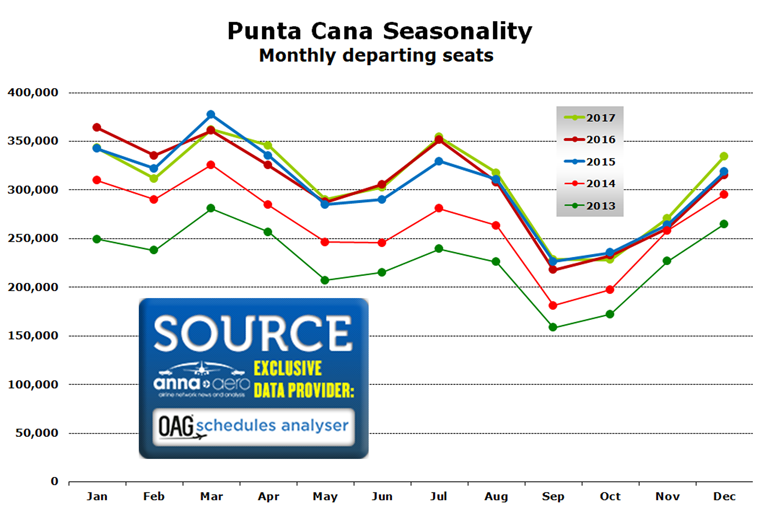 Schedule data for the past five years show that Punta Cana experiences seasonal variations in capacity. Generally the airport witnesses peak demand in March before a slight decline is followed by further peaks in July and around December and January. The biggest drop off in capacity occurs during September and October, which corresponds with hurricane season in the region. The four airlines with the most departing capacity from Punta Cana in 2017 are all US-based. American Airlines will provide the most, with about 450,000 seats and is followed by Delta Air Lines, JetBlue Airways and United Airlines. American has cut the number of seats available from Punta Cana by 4% since 2016, but Delta, JetBlue and United have increased capacity by 8%, 2% and 6% respectively. The strongest year-on-year growth amongst the top 12 carriers serving the airport came from LATAM Airlines and Canadian LCC Sunwing Airlines, which increased their respective capacities by 50% and 17% between 2016-2017.

American leads the way in 10 months out of 12

American provided, or will provide, the most capacity from Punta Cana in every month of 2017 except January, when Air Transat operated more seats, and September, when JetBlue was the largest airline. The US-major’s busiest month from the Caribbean airport was July, and it operated its fewest seats in September and October. Although American, Delta, United and JetBlue all vary the capacity on offer from Punta Cana over the year, none of these airlines matches Air Transat’s level of seasonal variation. The Canadian carrier operates its largest number of seats from the Dominican Republic airport from December-April, before significantly reducing capacity from May-October. Its busiest month is March when it provides nearly 40,000 departing seats, 521% more than in its quietest month of September. 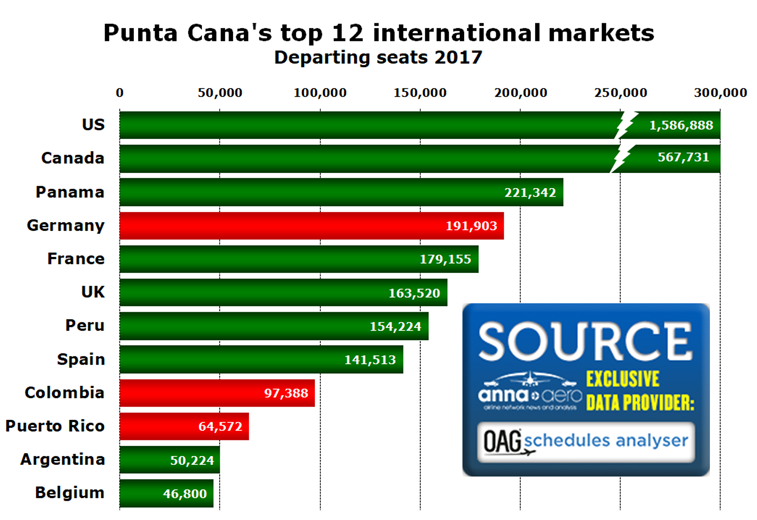 The US and Canada account for 58% of all departing seats from Punta Cana in 2017. The US market remained static from 2016-2017, but there was a 5% increase in capacity on flights to Canada. The top 12 country markets to experience the largest growth from Punta Cana during this period were Spain, Argentina and the UK with 29%, 24% and 20% increases in seat numbers respectively. Germany, Colombia and Puerto Rico (highlighted in red) saw seat numbers cut from 2016-2017. In 2016, Brazil was the 10th largest destination market from Punta Cana, but the number of seats available to the South American nation was reduced by 43% in 2017.

US and Canada are main destination markets year-round

The US and Canada are the number one and two destination markets from Punta Cana in all 12 months of 2017. The main destination airports are New York JFK, Atlanta and Miami in the US, and Toronto Pearson and Montreal  in Canada. The US and Canadian markets do see some seasonal variation from Punta Cana. In 2017 the US market only dropped below 100,000 departing seats in September and October with a peak in July. During the seventh month of this year, 121% more seats were available to the US than in September. The Canadian market experienced its highest capacity from December-April with a peak in March, with September again the quietest month. US-bound flights witnessed one of the most extreme drop-offs in capacity from August-September with available seats decreasing by 44%. Some markets, including Germany and France actually experienced modest increases in capacity from August to September 2017. Six new routes have been launched to Punta Cana in 2017 and a seventh will be added by Air Transat in December when it launches services from Sault St. Marie in Canada. 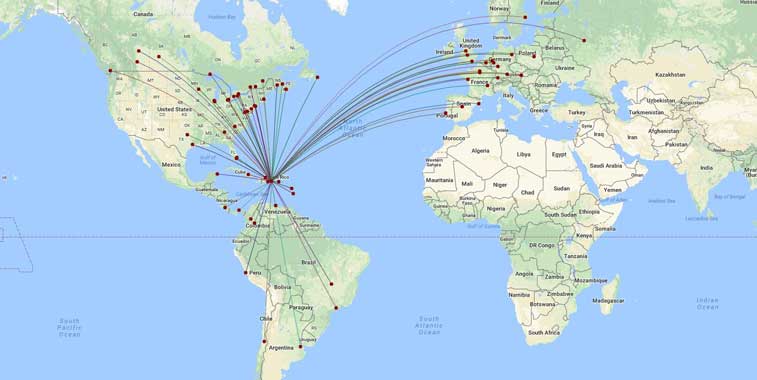 Punta Cana’s destination map clearly demonstrates the strong emphasis on flights to the US and Canada which account for more than half of all departing seats in 2017. The airport also has long-haul connections to Europe, with flights to Germany, France and the UK among others. Closer to home there are connections to Central and Southern America, along with flights to neighbouring Puerto Rico.