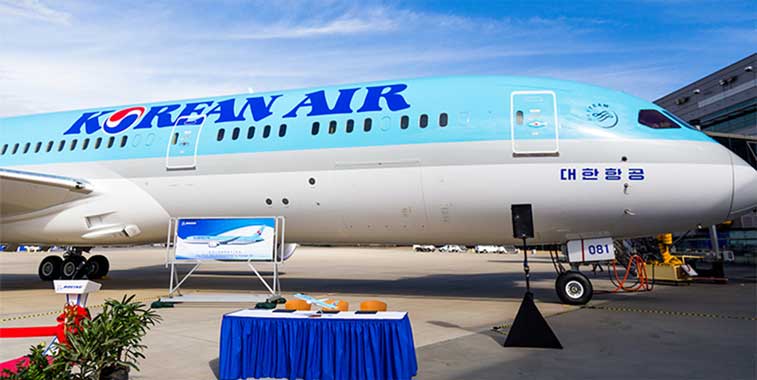 Korean Air’s international and domestic capacity remained relatively flat from 2016-2017. The carrier has taken delivery of a number of new aircraft types over the past 10 years including 787s. It is the only carrier other than Lufthansa to operate the world’s two largest commercial passenger aircraft, having both A380s and 747-8s in its fleet.

Korean Air is the national carrier of South Korea and one of only two airlines (along with Lufthansa) in the world to operate both of the largest commercial airliners in service, the A380 and 747-8. Despite this, the average capacity on the carrier’s international services dropped from 279 to 255 seats between 2008-2017. The average seats on domestic flights also decreased from 200 to 187 during this period.

Seoul Incheon is Korean Air’s largest origin point, accounting for 47% of all departing seats from its multiple South Korean airports in 2017. Incheon leads the way for international departures, with 84% of the carrier’s international capacity from its home country, but only accounts for 3.4% of its departing domestic seats. The largest airports in Korean Air’s domestic network are Seoul Gimpo and Jeju which each account for about one-third of its intra-South Korean departures. Since Incheon is the main airport for international departures, but Gimpo has more domestic services, passengers wishing to connect between the two networks in Seoul may face the prospect of a transfer between airports. 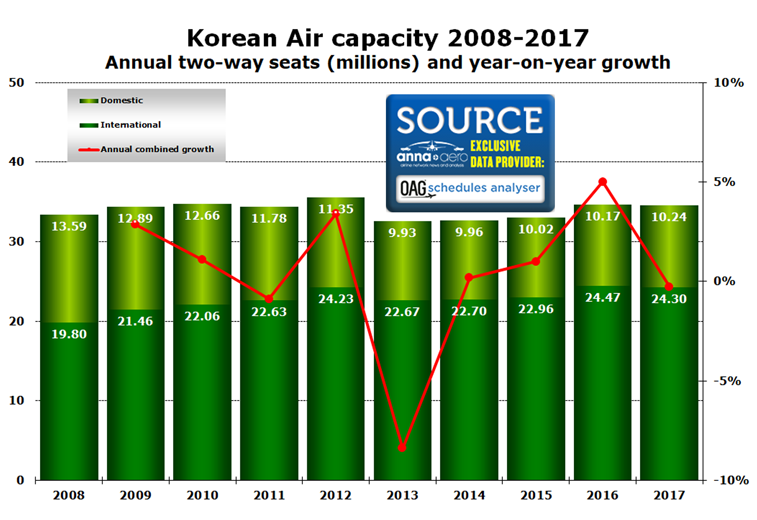 The reduction in domestic capacity corresponds with the launch of operations by LCC Jin Air in 2008, which is a subsidiary of Korean Air’s parent company. OAG schedules show that Korean Air and Jin Air operate on three of the same domestic airport pairs in 2017. Over the past 10 years it appears Korean Air has reduced capacity on all three these routes, while Jin Air has introduced services or increased the number of seats available. This suggests that the parent company’s strategy is to apply a mix of full-service and LCC options on these domestic sectors. The largest domestic route operated by both airlines is Gimpo-Jeju, on which they will offer a combined 285 frequencies during the week commencing 21 November. 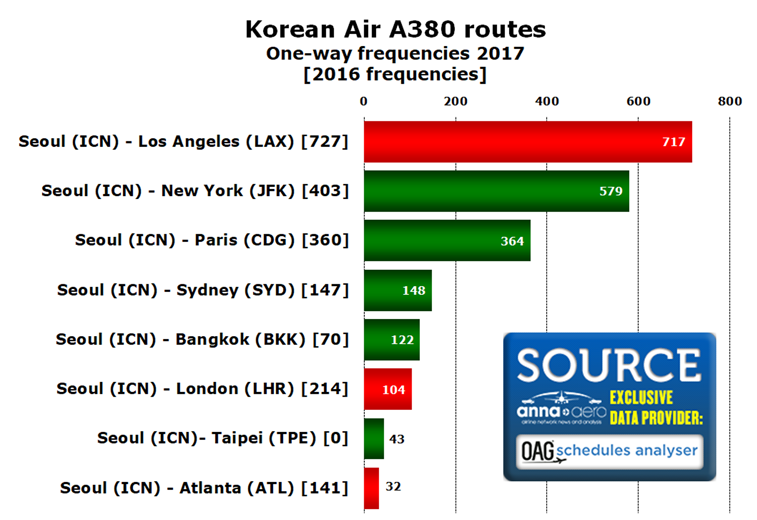 Korean Air received its first A380 in May 2011 and has taken delivery of ten aircraft in total. The South Korean carrier deployed its A380s on eight routes during 2017, including three to the US and two to Europe. Its shortest A380 operation is the 1,463-kilometre Incheon-Taipei Taoyuan airport pair, while it also uses the aircraft to connect the capitals of South Korea and Thailand.

None of Korean Air’s eight A380 destinations are served exclusively by its double-deckers in 2017, with other types including 747-8s, 777-300s or A330s supplementing the larger aircraft on at least some frequencies. The airline has reduced the number of A380 flights serving Los Angeles, Heathrow and Atlanta in 2017. On the latter two routes, A380 frequencies have been replaced by 747-8 and 777-300 operations respectively. 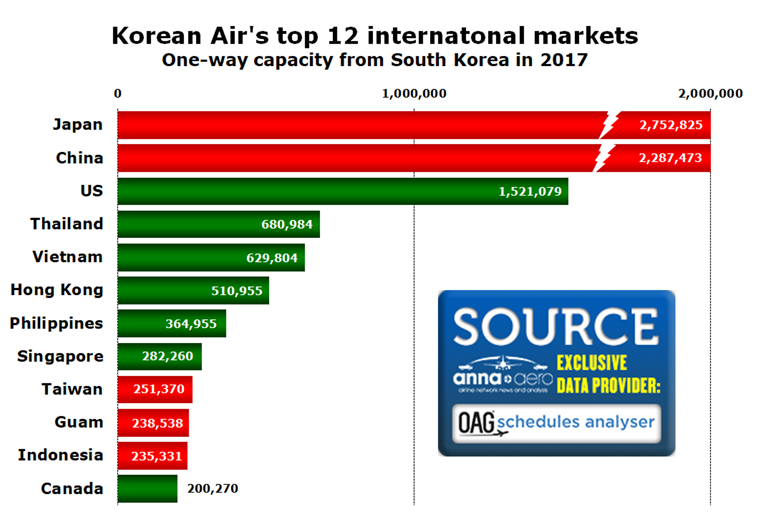 Asia Pacific destinations account for ten of Korean Air’s top 12 international markets from its home country in 2017. Japan and China account for 42% of the airline’s international seats alone. The top ranked market that experienced the strongest growth between 2016 and 2017 was Vietnam, with a near-20% increase in seats. A number of the top international markets (highlighted in red) witnessed a reduction in capacity from 2016 to 2017, with China and Indonesia seeing the largest cuts at 9% and 8% respectively. Outside of top international markets, Korean Air more than doubled the seats available to India, with capacity boosted by the introduction of a new service from Incheon to Delhi in December 2016.

Korean Air’s largest international airport pairs in 2017 link Incheon with Hong Kong and Bangkok Suvarnabhumi. Both routes have experienced a growth in capacity between 2016 and 2017. According to anna.aero’s New Routes Database, Korean Air launched one new international service in 2017, linking Incheon with Barcelona. 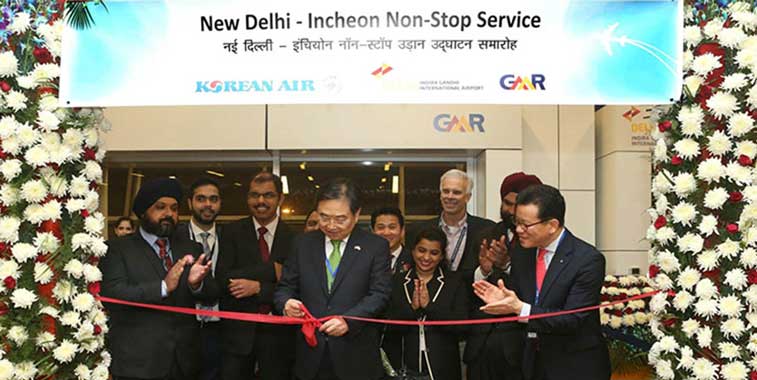 Korean Air has reduced its published domestic capacity but increased the seats available on international services over the past 10 years. Between 2016 and 2017 the carrier more than doubled the capacity available on flights to India. In December 2016 it launched a new route from Incheon-Delhi.