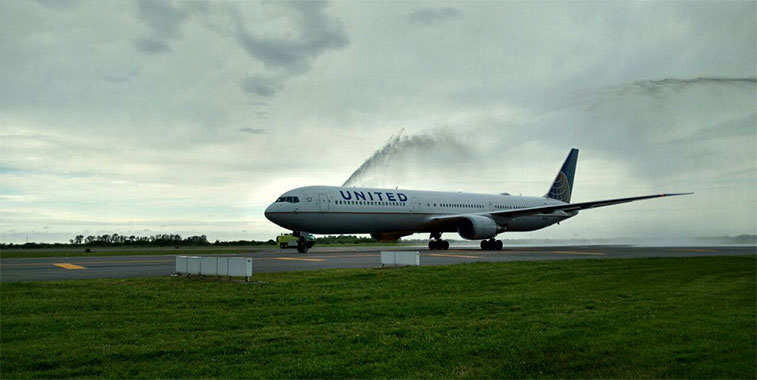 United Airlines launched the 8,541-kilometre daily link from New York Newark to Buenos Aires Ezeiza on 28 October joining the Star Alliance carrier’s existing daily 777-200-operation from Houston Intercontinental. As a result of this recent expansion by United, it has surged into the Argentinian capital city airport’s top 12 serving airlines.

Buenos Aires Ezeiza is Argentina’s second busiest airport, after Buenos Aires Aeroparque, but it is the country’s main international gateway. Its network of services (using OAG schedule data for w/c 17 November) currently covers 48 destinations across 19 different countries. This increases to 60 destinations and 24 countries if one-stop services are included. The airport is served by 28 carriers, which is the identical amount recorded in the same week of 2016. Despite this total figure remaining unchanged, there has been some movement in terms of the airport’s tailfin collection, with Azul Airlines joining Ezeiza’s partners (it launched its only international route from Belo Horizonte on 6 March), while Conviasa no longer serves the airport (it had previously operated from Caracas and Porlamar in Venezuela up until last month).

For the last three years, Ezeiza has done something it has failed to do at any other point over the last decade, and that is grow constantly year-on-year. While traffic has suffered from mixed fortunes since 2007, the overall trend is upwards, with average growth being 3.1% over the period, despite there being three years when passenger throughput fell (2009, 2011 and 2013). 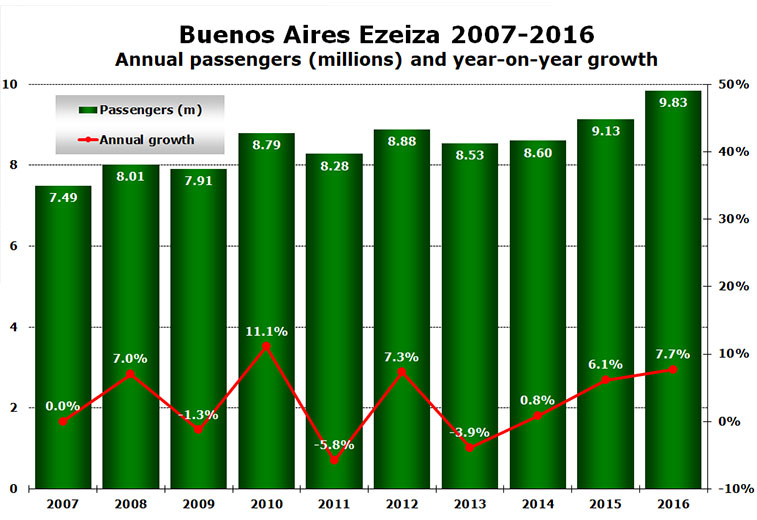 If Ezeiza’s upward traffic trajectory continues as it has since 2013, the airport should pass 10 million passengers in 2017. In the current year up to the end of June, the airport has handled 4.79 million passengers, of which 93% were on international flights (4.47 million). This compares to Aeroparque’s traffic mix, which is 76% domestic, based on a total throughput between January and June of 6.27 million passengers. The capital city’s facilities combined have processed 60% (11.06 million) of the 18.33 million passengers which have used all of the country’s airports during the same sixth month period of 2017.

LATAM or not to LATAM

As suggested before, Ezeiza is presently used by 28 airlines, but it might be more accurately classified as having 25 serving carriers depending on whether the LATAM Airlines Group airlines are considered together. The group’s airlines operating into Ezeiza include those formerly known as LAN Airlines (LA), TAM Airlines (JJ), as well as LATAM Airlines Argentina (4M; previously Aero 2000) and LATAM Airlines Paraguay (PZ; previously LAP – Líneas Aéreas Paraguayas). Got that? For the purposes of this analysis, and the fact that they still use separate airline codes in the OAG schedules, our data elves have treated these four airlines separately in order understand where any capacity changes have been made within the group.

The airport’s top 12 airlines have changed slightly over the last 12 months, with LATAM Airlines Paraguay (ninth in 2016) and Air France (10th) cutting their capacities and falling to 25th and 18th positions respectively in 2017. The former has culled its weekly one-way seats by 62% since last November, with the SkyTeam carrier’s network planners being less brutal to its schedules, but still pruning capacity back hard, reducing its commitment to Ezeiza by 37%. Replacing them inside the top 12 are United Airlines and Lufthansa. The USB3 (US Big 3) carrier’s recently added daily New York Newark service has helped it up the rankings to ninth from 18th a year ago. By contrast, and despite no capacity growth or cuts, Lufthansa has merely filled the void created by the falling weekly seats of LATAM Airlines Paraguay and Air France, creeping from 13th last year to 12th this November. 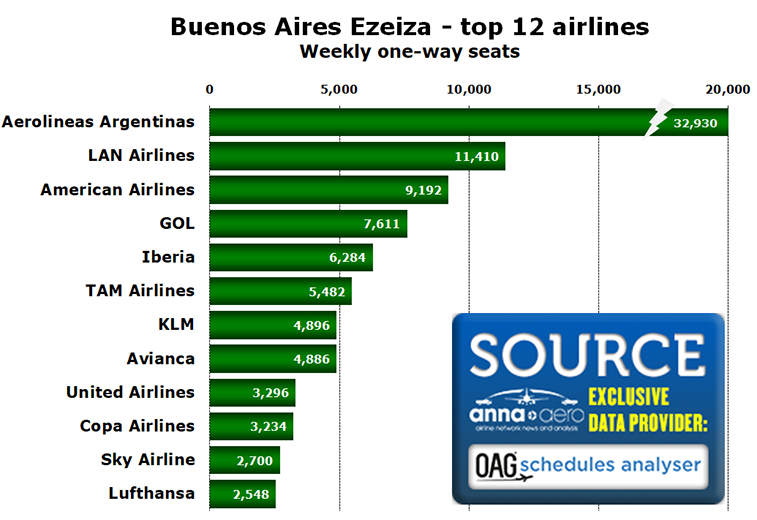 While the airport’s #1 carrier Aerolineas Argentinas has provided a steady amount of annual growth (+5.4%), the second-placed incumbent LAN Airlines has trimmed its capacity by a harsh 14% year-on-year. The latter airline is by far the worst-offending partner at Ezeiza, with only one other carrier in the top 12 – Sky Airline (-2.6%) – cutting its weekly seats versus those offered in the same week last year. With 76% annual growth, United is the fastest growing airline at the Argentinean capital this November, leading from Iberia (+25%) and TAM Airlines (+22%). Along with a previously mentioned static Lufthansa is Ezeiza’s fourth largest carrier GOL, which is offering exactly the same seats as it did last November.

Unsurprisingly given the fact that LAN Airlines has trimmed its capacity at Ezeiza, weekly one-way seats to Santiago have fallen also (-12%). While the remaining four carriers (Sky Airline, Aerolineas Argentinas, KLM and Air Canada) on the sector have more or less maintained their respective weekly frequencies, the oneworld carrier has significantly reduced its rotations between the two capitals from 35 to 25 since last November. Despite this capacity trimming, the Chilean route is still the #1 city pair at the airport, however fast-growing Miami (+9.2%) has not only become the second-most important route (up one place from third spot last November), it is reducing the gap between it and Santiago. 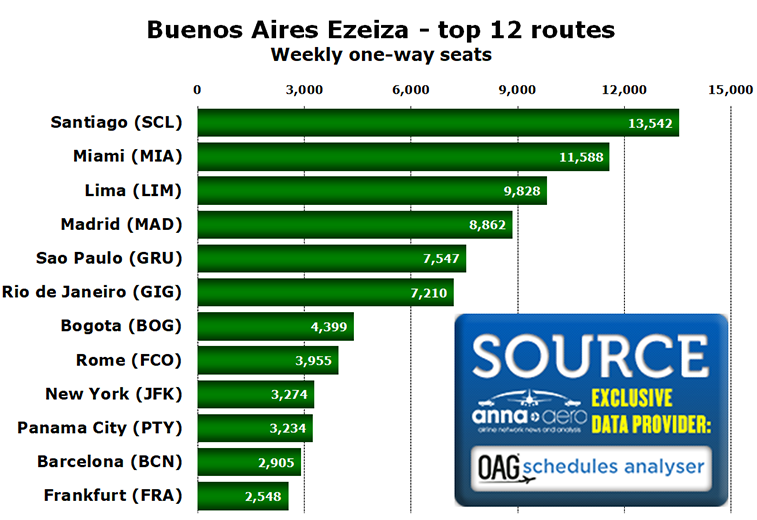 Only two further routes have faced capacity reductions over the past 12 months at Ezeiza, with last year’s second biggest route to Sao Paulo Guarulhos being cut by over a third, and seats to New York JFK dropping by 11%. In terms of the routes delivering the largest annual increases, Barcelona is way ahead of the pack with a 120% hike in capacity. While incumbent Aerolineas Argentinas has maintained its five weekly frequencies to the Spanish city, new entrant LEVEL, with its similar number of weekly flights, has dramatically changed the competitive landscape on this sector. With far from sluggish growth of 53% and 25%, services to Bogota and Rome Fiumicino are both showing robust annual improvements in capacity.

More growth to come from Azul

Having only launched its first international route to Ezeiza earlier this year, Azul is growing its presence further in December, commencing daily flights from Navegantes and a weekly service from Cabo Frio, both in Brazil. Further consultation of anna.aero’s New Routes Database reveals that in February, Norwegian will start its four times weekly operation from London Gatwick, and Ethiopian Airlines is scheduled to extend its existing Addis Ababa-Guarulhos flight onto Ezeiza from March. 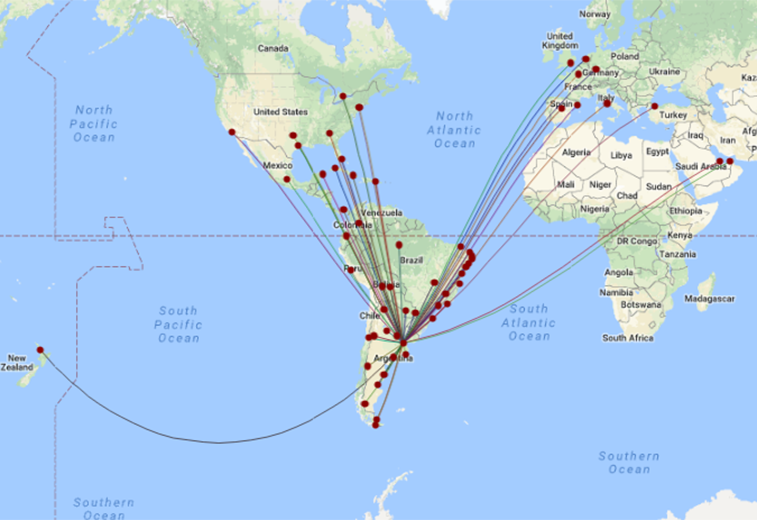 Buenos Aires Ezeiza Airport’s network of 60 destinations is dominated by regional connections in South America, but it does boast useful intercontinental connections to the US, Europe, the Middle East and New Zealand. Africa will be added to the map next March when Ethiopian Airlines extends its Sao Paulo Guarulhos service to Argentina.