Channel Islands to UK market returns to growth; Flybe is the largest carrier, Jersey has most departing capacity 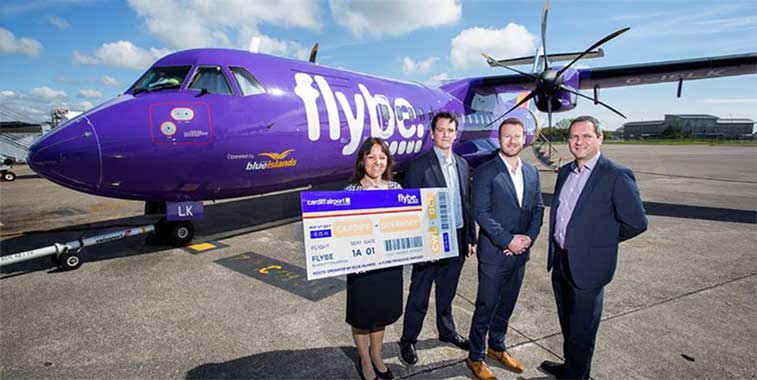 Capacity on services from the Channel Islands to the rest of the UK has been on the up over the past three years, with the number of seats increasing by 4.1% since 2015. Cardiff Airport celebrated the launch of the only new route between the islands and the UK mainland in 2017, when it welcomed the launch of a seasonal link to Guernsey, operated by Blue Islands under its Flybe franchise arrangement.

The Channel Islands are situated in the English Channel, close to Northern France. They are crown dependencies, which are self governing and not officially part of the UK. They have their own legal, fiscal and administrative systems, but the UK government is responsible for their defence and international relations.

Domestic links available to UK from Jersey, Guernsey and Alderney

Flights between the Channel Islands and the UK are officially categorised as domestic. There are three commercial airports on the islands, with one each on Jersey, Guernsey and Alderney. All three airports have long-established commercial air links to the rest of the UK. In 2017, Jersey, Guernsey and Alderney Airports all experienced an increase in capacity on services to the rest of the UK.

About 1.47 million seats will be flown from the Channel Islands to the rest of the UK in 2017. This is 9.3% less than in 2008. The market has witnessed a number of capacity cuts over the past 10 years, followed by periods of recovery. The largest cuts came from 2008 to 2009 when capacity was reduced by 8.7%, probably due to the global economic crisis. The following year saw seat numbers rebound, although they have never recovered to 2008 levels. From 2011 to 2014 capacity fell by 6.6%, but since then there has been three years of consistent growth. Between 2015 and 2017 the number of seats available from the Channel Islands to the UK increased by 4.1%.

Jersey is main origin airport for services to UK

Jersey has consistently offered the most capacity from the Channel Islands to the UK and will account for 64% of the one-way, non-stop seats available in this market in 2017. Guernsey is the next largest origin airport, with more than one-third of the available seats, while Alderney accounts for just 1.4% of departing capacity to the rest of the UK. 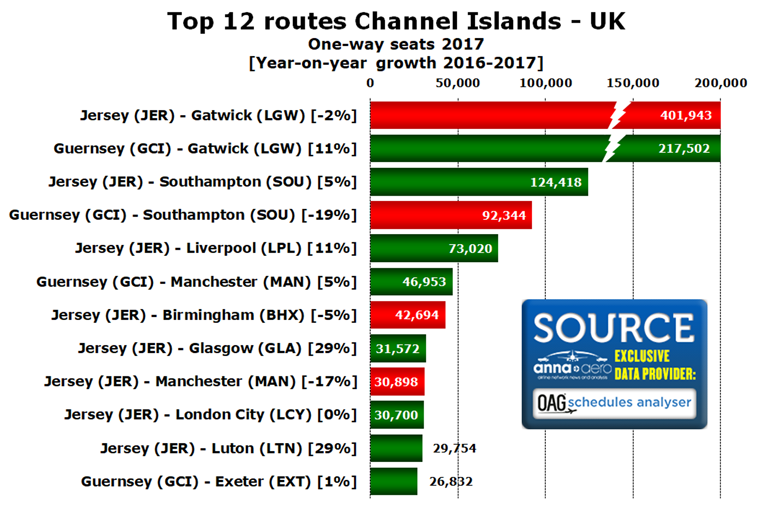 London Gatwick and Southampton are the largest UK arrival airports for services from the Channel Islands, based on available capacity in 2017. Gatwick accounts for 42% of all arriving seats in this market. Southampton is the only UK airport with direct services to all three Channel Islands and will process 16% of all arriving capacity from the Islands in 2017. An analysis of the top 12 UK airports for inbound capacity from the Channel Islands reveals that Glasgow and London Luton experienced the strongest year-on-year growth from 2016 to 2017 with each seeing an increase of 29%. Doncaster Sheffield witnessed the largest capacity cut during this period with a 14% reduction in seats.

Gatwick and Southampton are leading destinations

The airport pairs with the most capacity from the Channel Islands also link Jersey and Guernsey with Gatwick and Southampton. The top-ranked routes with the strongest year-on-year growth were the services from Jersey to Glasgow and Luton. The Guernsey-Southampton route saw the largest reduction in capacity from 2016 to 2017 amongst the top 12 airport pairs, with a 19% cut in seat numbers. This was due to the number of daily frequencies being optimised after Blue Islands became a Flybe franchise partner in 2016, reducing the operators on this route from two to one. Alderney only has one link to the UK mainland, with a direct service to Southampton. Operated exclusively by Aurigny with 19-seat Dornier 228s, OAG schedules show this airport pair witnessed a 10% year-on-year increase in capacity from 2016 to 2017, due to an increase in annual frequencies. 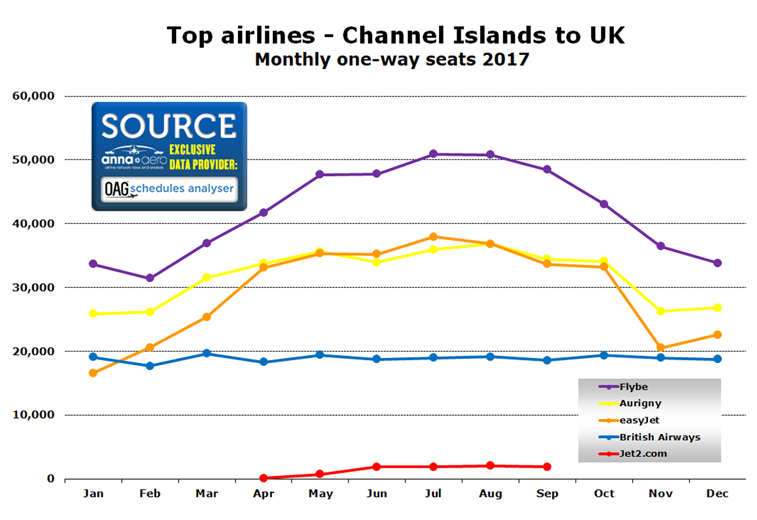 Only Flybe, Aurigny, easyJet and British Airways will operate year-round services from the Channel Islands to the UK in 2017. No carrier operates from all three Channel Islands. Jet2.com flies from Jersey to Leeds Bradford during the summer season and witnessed the strongest percentage growth in the Channel-Islands-UK market in 2017, increasing its capacity by 11%, albeit from a small base. The next largest growth was from Flybe and Aurigny, which each saw a 9% increase in the number of published seats available.

The increase in Flybe’s published capacity from the Channel Islands to the UK was a result of the rationalisation of its network with that of Blue Islands’, after the latter carrier became a franchise partner operating under the Flybe brand. This arrangement, which began during 2016, has actually resulted in a 7.1% reduction in the total number of seats on offer to the UK when 2017 schedules are compared to 2015. There is some seasonality evident in the Channel Islands-UK market, with Jet2.com only operating in the summer. Flybe and easyJet offered 50% and 128% more seats in July 2017 than in January. BA had the most consistent year-round capacity in the market. anna.aero’s New Route Database shows that Flybe’s summer service from Guernsey to Cardiff was the only new service opened from the Channel Islands to the UK in 2017. 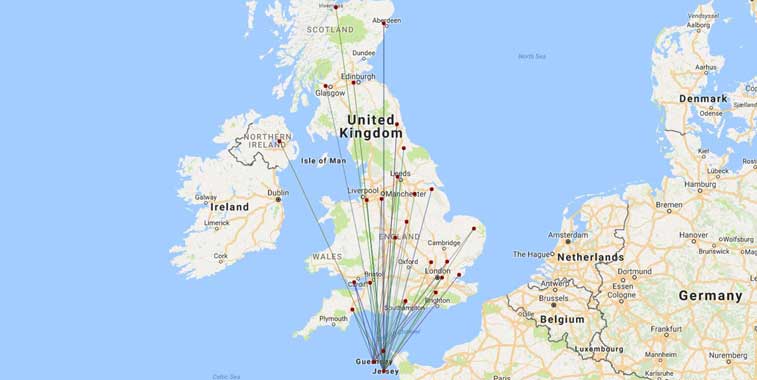 The Channel Islands were connected to many UK mainland airports in 2017, with direct services linking them to the south coast and London, and to destinations as far north as Aberdeen and Inverness. Only Flybe, easyJet, Aurigny and British Airways will serve the islands year-round and some connections are only operated in the summer months.