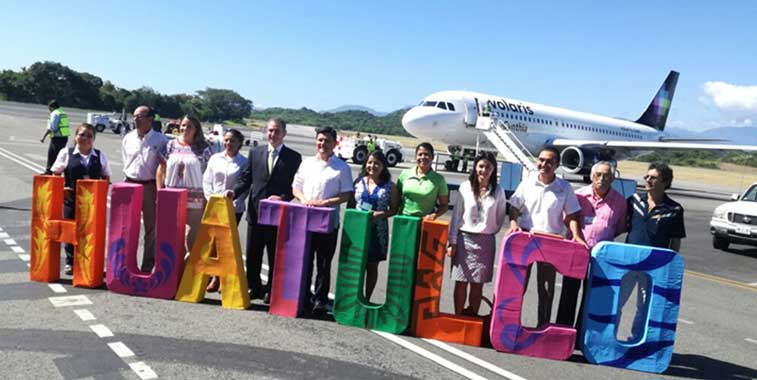 Mexico is home to the 11th largest domestic market in the world in 2017. The country experienced a 5.9% year-on-year increase in available domestic seats from 2016 to 2017. Volaris has added a number of new domestic links in recent weeks. On 13 November, Huatuclo Airport welcomed the LCC’s inaugural service from Monterrey.

Mexico has the 11th largest domestic market in the world in 2017, but one trend in the Mexican market over the past 10 years has been the increase in international seats as a percentage of overall capacity. The number of available seats has increased on both domestic and international services, but the latter has seen stronger average growth since since 2008. In that year, domestic services accounted for 55% of the total market, but in 2017 international capacity has increased to represent 50% of all two-way seats.

From 2008 to 2017 total capacity has increased by 52%. With the exception of a 9.5% cut in seats from 2008 to 2009, the Mexican market has seen consistent year-on-year growth over the past 10 years. The cuts at the beginning of this period were most likely a result of the global economic crisis, but the market responded with modest growth of between 1.3% and 1.4% over the following three years. 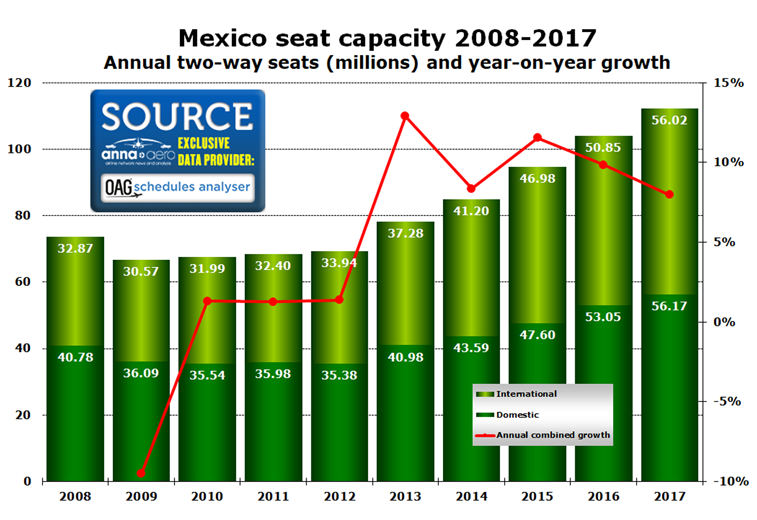 The largest increases in total capacity have taken place over the past five years, with double-digit growth experienced in 2013, 2015 and 2016. Domestic seats have increased by 38% since 2008, but they have been outpaced by international expansion over the last 10 years, with available two-way capacity on these particular services experiencing 70% growth in that time frame. During the peak growth period seen over the past five years, domestic seats expanded at a faster rate in 2013 and 2016, but international capacity witnessed the strongest percentage growth in 2014, 2015 and 2017. Year-on-year international growth in 2017 is 10%, compared to a 5.9% increase in domestic seats.

Home- and US-based carriers make up the nine largest airlines by published capacity operating international or domestic services in the Mexican market in 2017. The four largest Mexican operators, Aeromexico (including its regional subsidiary Aeromexico Connect), and the LCCs Volaris, Interjet and VivaAerobus will offer more than 70 million seats combined in 2017, accounting for 63% of the total market. The four Mexican carriers provide 95% of seats in their home domestic market and 31% of international capacity. 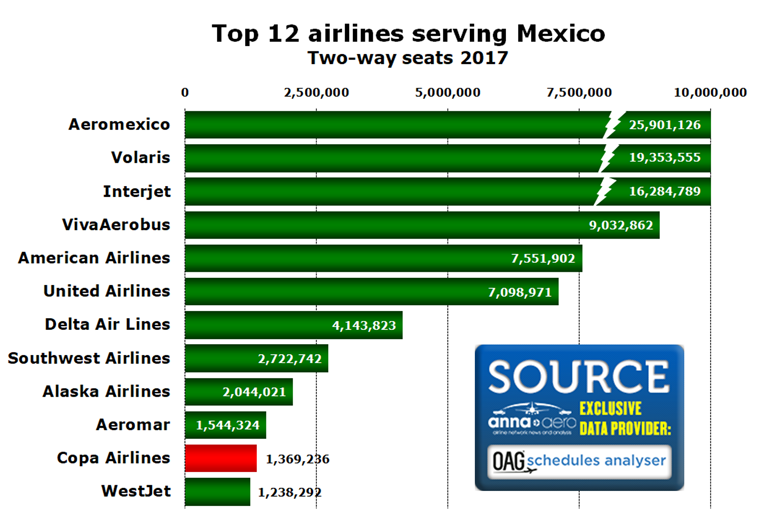 The carriers with the strongest year-on-year capacity growth in the Mexican market were Southwest Airlines and VivaAerobus, which witnessed expansion of 39% and 19% respectively from 2016 to 2017. Whereas Southwest is purely focused on international links to the US, VivaAerobus grew its domestic capacity by 19% and its small base of international seats by 12%. Other LCCs also experienced strong growth, with Volaris and Interjet increasing their total capacities by 8.5% and 9.4% respectively. Both carriers grew their international seats faster than their domestic offerings. The only top 12 carrier to cut capacity from 2016 to 2017 was Copa Airlines (highlighted in red).

Top 12 airports all experience growth in 2017

Mexico City and Cancún are the largest airports in Mexico based on departing capacity in 2017. Together they account for 49% of the country’s total departing seats, including 40% of one-way domestic capacity and two-thirds of one-way international seats. Mexico City is the largest origin point in Mexico for both domestic and international capacity in 2017. Cancún is the second largest origin airport for international seats, but ranks only fourth for domestic capacity behind Guadalajara and Monterrey as well as the capital city’s main hub. 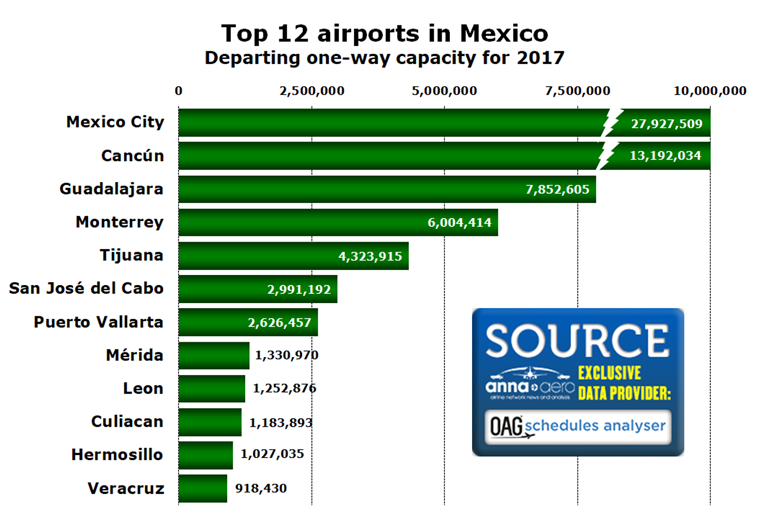 Seven of the top 12 airports in Mexico experienced double-digit, year-on-year growth from 2016 to 2017. The strongest expansion was witnessed at San José del Cabo, Leon and Culiacan, where departing seats increased by 22%, 16% and 14% respectively. Domestic capacity outgrew international seats at the latter two airports and at seven of the top ranked airports in total. San José del Cabo experienced a 16% increase in domestic seats, driven by Volaris and VivaAerobus, and a 24% increase in international capacity, aided by additional capacity added by various US carriers. The other airports to experience a double-digit increase in total departing capacity were Puerto Vallarta, Cancún, Guadalajara and Mérida.

The US and Canada account for more than three-quarters of all departing international seats from Mexican airports in 2017. Given Mexico’s geographic location between North and South America, it is unsurprising that eight of its top 12 international country markets are in one of those two continents, Central America or the Caribbean. The nine largest international airport pairs link Mexico with a US airport. This includes services to Los Angeles from four different Mexican airports. The largest route to a non-US destination links Mexico City with Bogota. 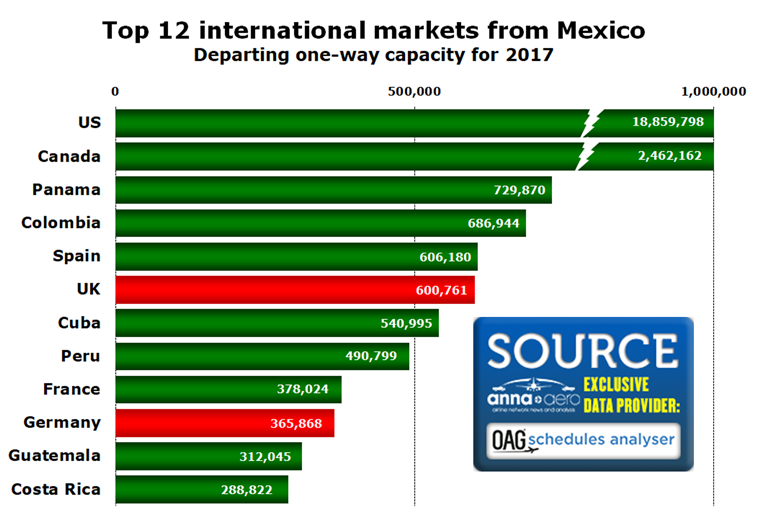 Costa Rica saw the largest year-on-year percentage increase in international seats from Mexico between 2016 and 2017. The Central American state witnessed a 30% increase in seats from Mexico during this period, while Canada and Guatemala each experienced a 20% capacity boost. Outside of the top 12 markets, Japan saw the strongest growth with the available seats more than doubling following All Nippon Airways’ introduction of services from Tokyo Narita-Mexico City. The UK and Germany (highlighted in red) were the only top-ranked country markets to see capacity from Mexico reduced in 2017, with the two European nations witnessing 4% and 3% cuts respectively. anna.aero’s New Route Database indicates that airlines have launched 27 international services from Mexico so far in 2017, and that a further 12 are due to commence by the end of the year. 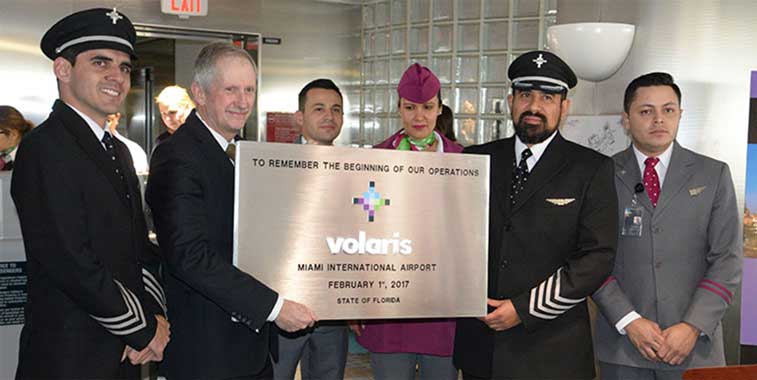