Delhi-Auckland is “Skyscanner Unserved Route of the Week” with 420,000 searches; Air India’s next Southwest Pacific adventure?? 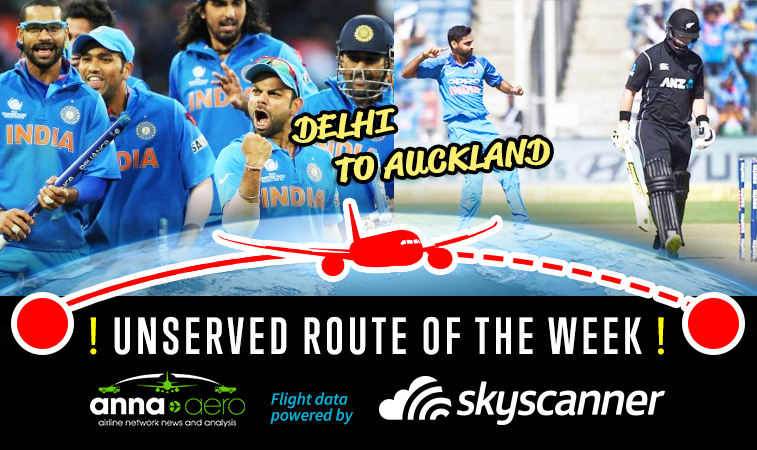 India beat New Zealand by six runs in the third T20 to clinch a historic win versus the Kiwis. India had never beaten New Zealand in a T20 match going into this series. What will have irked the Kiwi cricket fans even more is the fact that they will have had to fly home connecting via one of 17 intermediate points used in the last year by 420,000 travellers desperate for direct flights between Delhi and Auckland.

With around 420,000 searches in the last 12 months, a potential city pair from Delhi to Auckland has been identified as this week’s “Skyscanner-anna.aero Unserved Route of Week” – a powerful analysis based on aspirational data captured from the Skyscanner.net flight comparison site used by +60 million unique visitors per month. “In FY 2017 more than 240,000 passengers travelled between India and New Zealand,” comments Jitendra Singh, VP & Head Airline Marketing and Route Development, Delhi Airport. “Even after having a strong demand, it is unfortunate that the route is still not connected with a non-stop service and therefore remains as one of the top unserved destinations from Delhi Airport.” 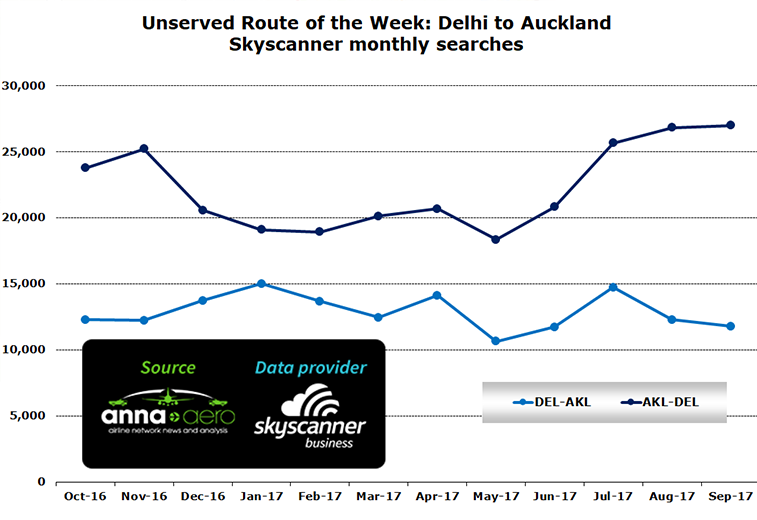 Skyscanner demand on this week’s unserved route shows a preference towards the Auckland end of the city pair, with a 63/37 split, so on this basis we looked at potential carriers at the New Zealand origin first.  “47% of total passengers travelling to Auckland from India were originating in Delhi,” adds Singh.

According to OAG schedules for the week commencing 20 November, the largest carrier at Auckland is Air New Zealand (57% share of weekly seats). Despite offering a 41-destination non-stop network from the airport, presently the carrier does not operate any routes into the South Asia region. However it does serve Singapore in Southeast Asia (daily), as well as Hong Kong, Shanghai Pudong, Tokyo Narita (all daily), Osaka Kansai and Tokyo Haneda (both three times weekly) in Northeast Asia. Asia has been a focus for the airline’s recent network growth, with Singapore (started in January 2015), Ho Chi Minh City (seasonal flights only; June 2016), Kansai (November 2016) and Haneda (July 2017) all commencing in the last three years. While the Star Alliance carrier also had plans to start flights to Manila in December last year, these never came to fruition. Reflecting on this information, Air New Zealand clearly has a strategy to develop its presence across Asia, and now having access to this compelling Skyscanner data, a route from Auckland to Delhi would seemingly fit into this existing network philosophy.

Auckland’s second biggest carrier is Jetstar Airways (12% share of weekly capacity), offering nearly 30,000 one-way weekly seats, but primarily serving the domestic market as well as Sydney, Melbourne, Gold Coast and Rarotonga in the Cook Islands. With the airline’s A320s being the largest aircraft it currently deploys in New Zealand, the 12,500-kilometre sector to the Indian capital would require its 787-8 equipment to be based in Auckland to fly the potential route. On this basis, Jetstar should not be considered as a likely target airline on this potential city pair at this time. 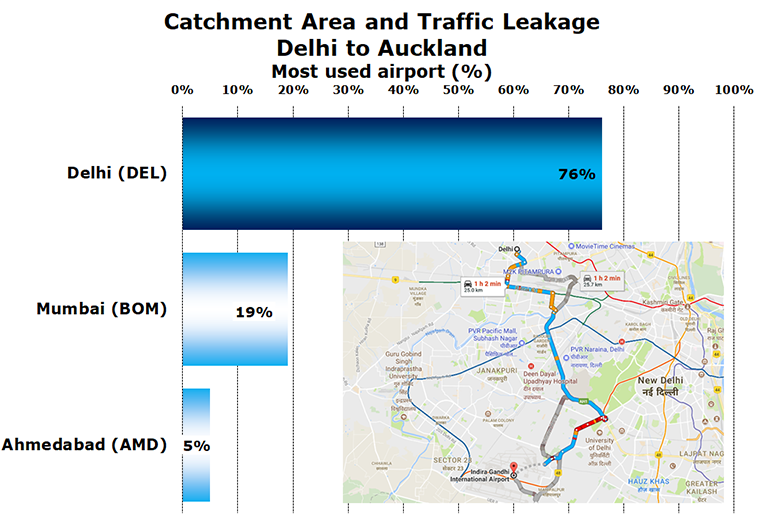 Matt Williamson Skyscanner’s Commercial Executive says: “Delhi serves 76% of the catchment (50 km around the airport) going to Auckland. With better service, such as a non-stop operation, the traffic could grow by 33%.”

Considering the Indian end of the route, the airport’s #1 capacity provider of its 63 current serving carriers is IndiGo, controlling 26% of weekly seats. While the LCC does fly internationally to Dubai, Doha and Kathmandu, its current fleet is limited to just two types, A320s, of which it has 115, and its recently delivered first ATR 72-600, according to ch-aviation’s fleet database. So for more than one reason, it is unlikely that IndiGo will be jumping onto this intercontinental city pair in the short-term.

Far more likely to consider this type of new route is the airport’s second largest capacity provider, namely Air India, which holds 18% of weekly one-way seats at Delhi. Indeed, it does already fly to the Southwest Pacific market, operating to Sydney (four times weekly) and Melbourne (three). Given its presence in the market, Air India could decide to include a Delhi-Auckland sector in its S18 flying programme over the coming months, with the opportunity to also link two Star Alliance hubs adding weight to the business case.

When looking at the previous year of search data, the busiest month for potential traffic flows (for both directions on the route combined) is July 2017, with over 40,000 searches, 11,000 higher than the lowest monthly figure, which was recorded in May 2017 (29,000 searches). According to OAG Traffic Analyser, because there is no direct service, the top three connecting options chosen by those passengers who did book travel between Delhi and Auckland in the last 12 months (year ending September 2017) indicates that the majority of connecting travellers used Guangzhou (23%), Bangkok Suvarnabhumi (21%) and Hong Kong (20%). At total of 17 different airports were used by passengers determined to fly between the two cities.

With a lack of direct services, travellers between these two cities have clearly got used to these one-stop alternatives. However, the market demand is extremely buoyant – as the graph below shows, with 9.2% of the Skyscanner searches for these indirect Delhi to Auckland services converted into ticket sales – that’s more than the average 8.3% achieved for Skyscanner conversion/purchase rates for all direct routes available from either Delhi or Auckland. However, with over 420,000 annual searches, a daily service should be immediately viable for the airline selecting to start this potential city pair. “We believe that establishing a non-stop connection will further stimulate the route and contribute immensely to the trade and tourism sector of both countries,” concludes Singh. 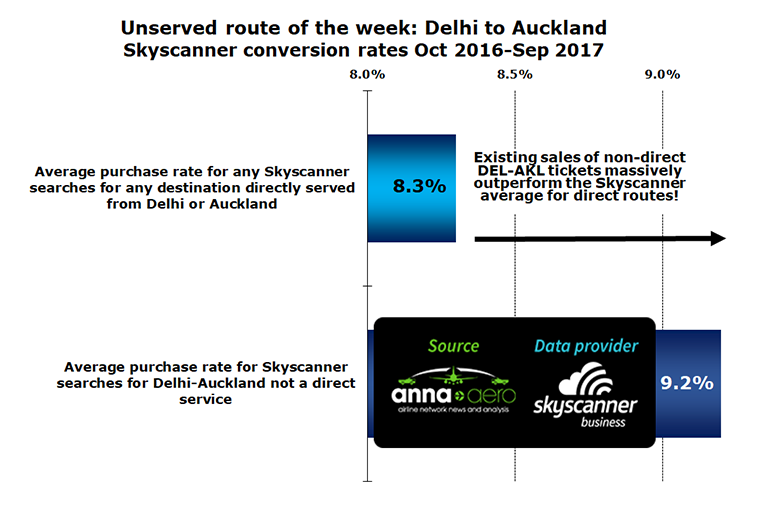