Tbilisi Airport on track to hit three million passengers in 2017, a 42% increase on last year’s total; destination of CONNECT 2018 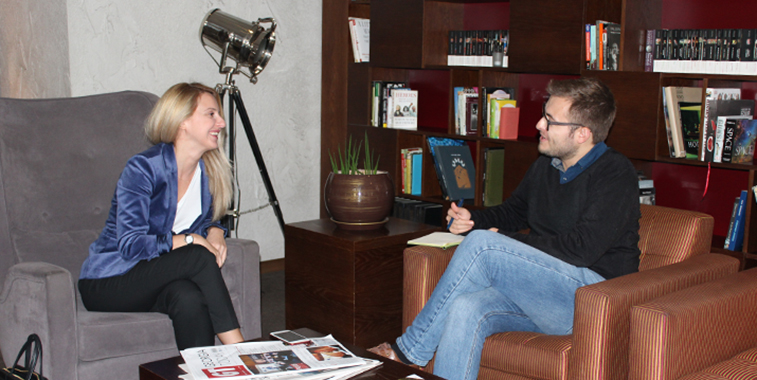 Dea Matchavariani, Business Development Manager, United Airports of Georgia chats with anna.aero’s Assistant Editor, Jonathan Ford, at the Hotel Coste in Tbilisi, one of the many official hotels for next year’s CONNECT taking place between 20-22 February.  Among the many topics discussed was the growth being seen at Tbilisi Airport. “We expect that for 2017 we will be very close to hitting the three million passenger barrier,” comments Matchavariani. One factor helping to enhance demand to Tbilisi, and indeed Georgia, is that the nation now offers visa-free travel from over 90 nations, while Georgian citizens can access EU and the Schengen area, excluding the UK and Ireland, without the need of obtaining a visa.

Serving the capital of Georgia, Tbilisi Airport , one of three international airports serving the country along with Batumi and Kutaisi, is on a roll at the moment when it comes to growth, with the airport being close to reaching the three million passenger mark this year, despite it only seeing 0.62 million passengers back in 2007. To find out a bit more about the growth being experienced in Tbilisi, anna.aero’s Assistant Editor Jonathan Ford travelled to the city, the destination for CONNECT 2018, to meet with Dea Matchavariani, Business Development Manager, United Airports of Georgia.

Close to three million passengers in 2017

For the first nine months of 2017, Tbilisi handled over 2.4 million passengers, a 41% increase over the 1.73 million it processed during Q1-Q3 of 2016. To give a scale of just how fast the it is growing, the airport by 31 September had already greeted 187,749 (8.3%) more passengers than it did in all of 2016. The best months for growth in 2017 so far are March and April, with both providing traffic increases of around 53% respectively, while July, August and September are the first months ever in the airport’s history to see above 300,000 passengers, with August’s even passing the 400,000 mark. 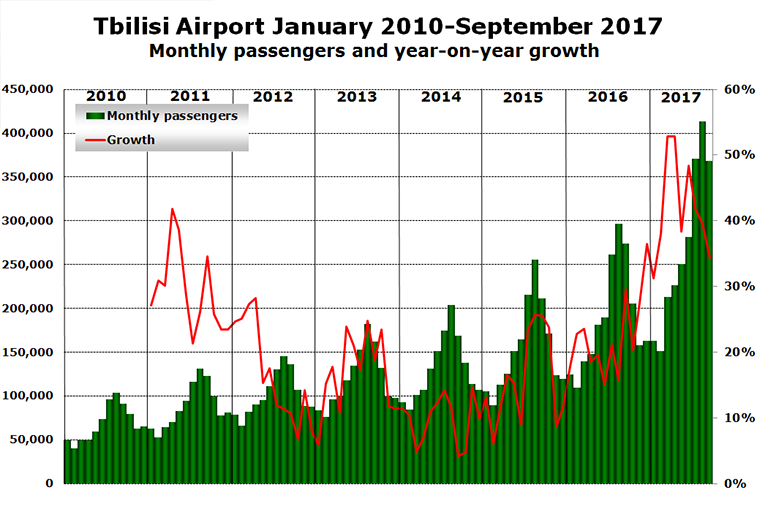 In 2007, Tbilisi greeted 615,873 passengers, meaning in the past 10 years the airport’s annual traffic has increased by a mighty 266%. “To meet demand, Tbilisi has expanded and we recently delivered a new arrival terminal building to cope with the increase in traffic,” comments Matchavariani. One reason which is helping Tbilisi boom is the fact that by having LCCs operating from Kutaisi, it has helped reduce ticket prices at Georgia’s capital airport. “Kutaisi is around 50% cheaper, and by having lower fares it has helped bring down the average ticket price from Tbilisi.” Another factor which is helping traffic grow is that Georgia now allows visa-free travel from over 90 countries, making it one of the most accessible nations to visit. Along with this, Georgian travellers no longer require a visa to visit nations of the EU and the Schengen area, excluding the UK and Ireland. “For 2017 we are expecting Tbilisi to be close to the three million mark,” adds Matchavariani. When asked about the current passenger split at Tbilisi between Georgian nationals and international visitors, Matchavariani commented that around 80% of passengers are of foreign origin.

All leading carriers showing growth in 2017

When analysing the carrier’s serving Tbilisi in 2017, none of the leading airlines are reporting capacity cuts. The number one airline when referring to OAG schedules is Georgian Airways, with it delivering a 50% increase in seat capacity this year. Turkish Airlines, which until last year was the airport’s number one carrier, is still reporting growth despite dropping to second place, with the Star Alliance member showing a 4.7% rise in seats for 2017 over 2016. Along with Turkish Airlines, only one other airline in the top 12 is not reporting double-digit growth – fellow Turkish carrier Pegasus Airlines – with it showing a 8.2% upswing in annual seats this year when compared to 2016. However, the leading carrier for expansion at Tbilisi is Qatar Airways, with it providing a 117% increase in seats to the Georgian capital, helped by the fact it now offers a twice-daily service to Doha. 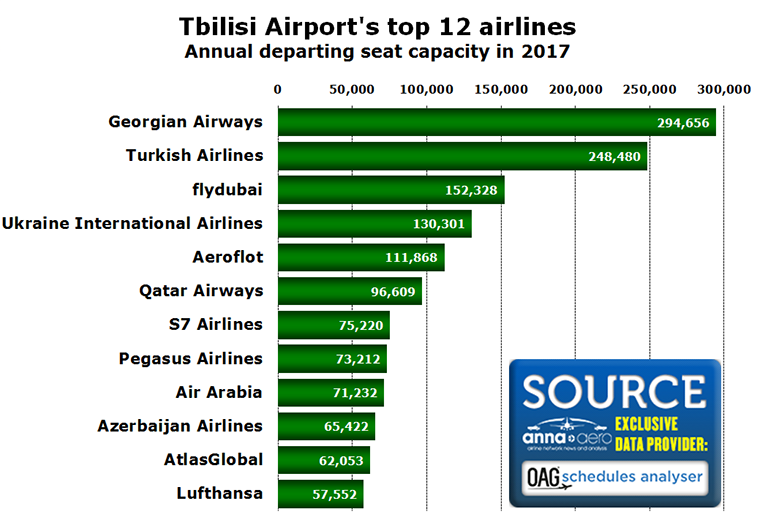 One recent win for Tbilisi is the new understanding between flydubai and Emirates, meaning that passengers now have another option of travel to more global destinations via Dubai. Among the new airlines to start service to Tbilisi this year is Gulf Air, with the carrier launching flights from Bahrain in June. “Most of the growth that we are seeing from Tbilisi is from CIS and the Middle East,” highlights Matchavariani. “The majority of travel between Tbilisi and the CIS is point-to-point, while the Gulf region is a mixture of point-to-point and connecting. For instance to Dubai it is a 50/50 split between connecting and O&D traffic for flydubai, while for Qatar Airways to Doha it is mainly connections. Most of the traffic on Turkish Airlines and Ukraine International Airlines is also connecting.” Other new carriers to Tbilisi in 2017 include Wataniya Airways from Kuwait City, plus Nordavia which started flying from St. Petersburg, a route that it operates twice-weekly on 737-500s.

Looking ahead to 2018, among the new destinations that will grace the departure boards of Tbilisi include Barcelona, Berlin Schönefeld, Bologna, Brussels, Düsseldorf and Paris CDG, all of which are being launched by Georgian Airways, adding to the airline’s numerous services which began this year including London Gatwick and Prague. In 2017 the airport’s leading connection is Istanbul Atatürk, with it seeing over 260,000 one-way seats this year, with Kiev Boryspil second, with just under 156,000. The third largest destination from Tbilisi is another hub, Dubai, with it offering a one-way seat total in 2017 of 147,000 when referring to OAG schedules. 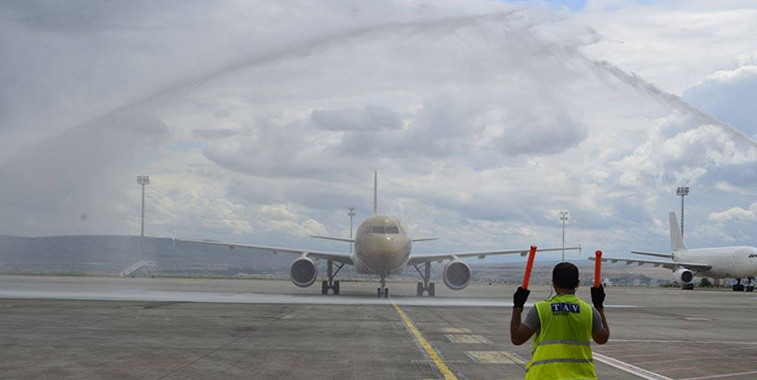 On 23 June Gulf Air commenced operations to Tbilisi from Bahrain, with the first flight being greeted with a water arch salute into the Georgian capital. Gulf Air is one of many new airlines to begin services to the airport this year, with others including Wataniya Airways from Kuwait City, plus Nordavia which started serving Tbilisi from St. Petersburg, a route that it operates twice-weekly on 737-500s.

Hundreds of airline and airport network development planners will soon descend on Tbilisi for the 15th CONNECT International Route Development Forum, taking place between 20-22 February 2018. The event is an essential part of the European route development calendar for commercial aviation, and a must for anyone serious about developing their brand recognition in Europe. Taking place over three days, the CONNECT conference programme brings together key figures from the industry to discuss and debate current and future aviation issues in a series of head-to-head interviews, keynote addresses and round table sessions. Route development and industry seminars also provide key industry analysis and updates, and select airlines are also invited to give exclusive briefings, giving full insight into company policy and learn how to adapt to the current demand being seen in the industry. Airlines which have already signed-up for this must-attend event include airBaltic, Air France, Eurowings, Germania, Georgian Airways, Gulf Air, KLM, Kuwait Airways, Jet2.com, Nordica, Pakistan International Airlines, Pobeda, Ryanair, Turkish Airlines, Ukraine International Airlines, Vueling, Wizz Air and many more. To sign-up for next year’s CONNECT, if you have not already done so, then follow this link. 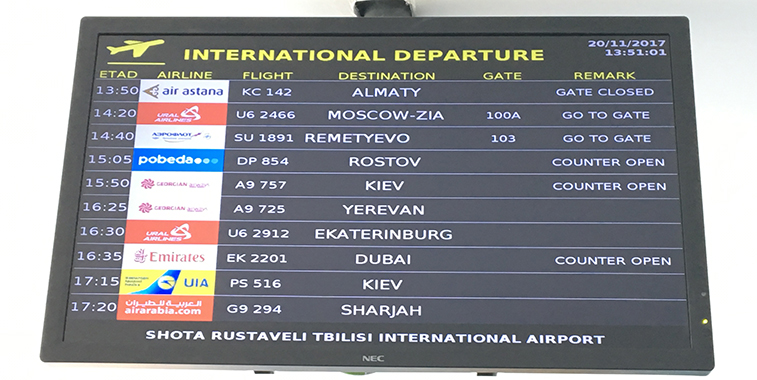 With its new partnership with flydubai, it now means that the Emirates EK flight code is now gracing the departure boards of Tbilisi Airport, giving passengers another option for travel beyond the Middle Eastern mega hub. “Traffic to Dubai is currently a 50/50 split between O&D and connections, while Qatar Airways to Doha is mainly connecting traffic,” comments Dea Matchavariani, Business Development Manager, United Airports of Georgia.