Air Mauritius sees traffic rise 6.6% during Q2 and Q3 of 2017; average revenue per passenger up by €51; Geneva becomes newest destination 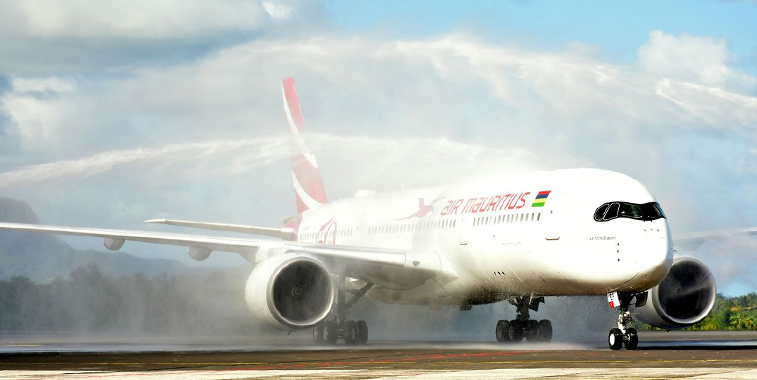 Air Mauritius serves the island of the same name, with its home market having an estimated population in 2016 of 1.26 million people. However, Mauritius saw 1.28 million international tourist arrivals last year, an increase of nearly 11% on the total of 1,15 million which arrived in 2015. This means that Mauritius saw 1.01 tourists per capita in 2016. Looking further into the data published by Statistics Mauritius, the busiest time of year for international visitors to the island is during Northern winter (October-January), with this period accounting for 56% of tourists visits in 2016, increasing from a share of 54% during the same period of 2015. Tourist numbers rose by 13% during the winter period between 2015 and 2016, while for the northern summer season (March-September), international visitor numbers only increased by 7.3%. Air Mauritius therefore appears to be operating in a prospering market, with this showing in the carrier’s latest passenger statistics.

For FY16/17, Air Mauritius carried over 1.6 million passengers, an increase of 6.9% on the 1.5 million it flew during FY15/16. Along with this increase in traffic, the airline also improved its average load factor from just below 79% to short of 80%, a 0.9% upswing according to the airline’s statistics. Air Mauritius has recorded traffic growth every year since FY12/13 (a year which saw passenger numbers drop by 2.1%), with the average annual increase since this period being 5.5%. 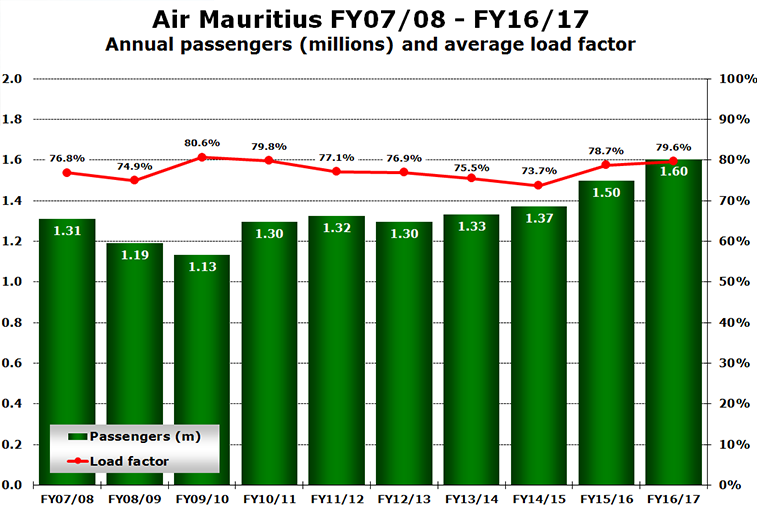 Average revenue per passenger up €51.63

When referring to Air Mauritius’ FY16/17 annual report, the carrier highlights that during the 12 month period leading up to 31 March 2017, it carried 1.60 million passengers with a revenue of €410.8 million. This means that on average the airline generated a revenue of around €256.33 per passenger, up from an average of €204.70 in FY12/13. During the past five years, Air Mauritius’ average revenue per passenger has increased by €51.63. The table below shows a further breakdown and comparison of the airline’s revenue from passengers for each region in FY16/17 and FY12/13.

During 2007 Air Mauritius held a majority share of annual seat capacity from its home airport, accounting for a 54% portion of the market. However in 2017, although the carrier is still the airport’s number one operator, its market share has dropped by 10 percentage points to 44%. One of the key factors in the flag carrier loosing market position is the increased capacity being seen from hub carriers including Emirates and Turkish Airlines. 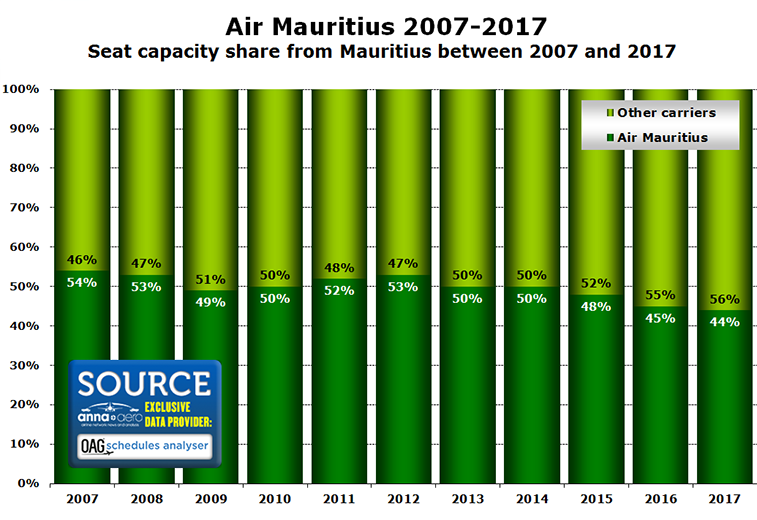 Although 2017 appears not to be the strongest year for the carrier in terms of positioning at its home airport, Air Mauritius has seen its market share climb at certain points during the past 10 years, particularly between 2009 and 2012, correlating with the biggest increase in passenger numbers for the carrier seen in the past decade, with traffic up 14% between FY09/10 and FY10/11.

Air Mauritius’ number one route from its home base this year is Reunion, the same position that the link held in 2016. However it is the only route in the top 12 to have encountered a capacity cut this year, with one-way seats to Reunion down by 1.8%. 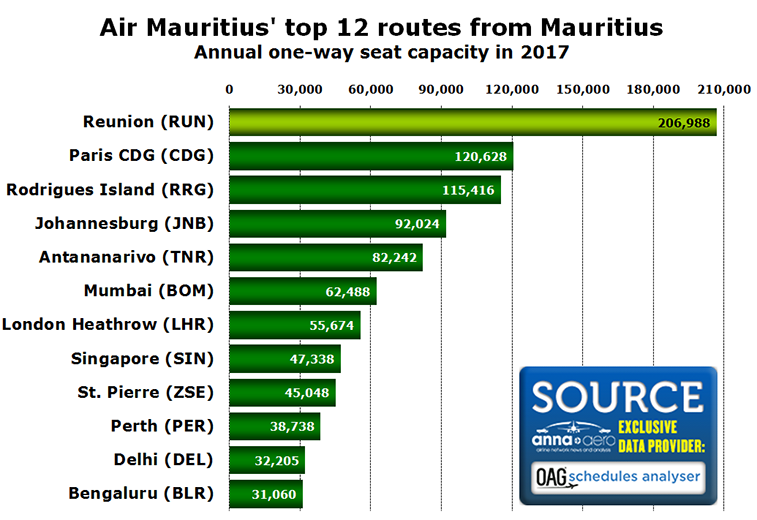 In 2017, Air Mauritius will serve 23 destinations from its home airport non-stop, the same total that it operated in 2016. However a substitution has been made, with the carrier dropping services to Kuala Lumpur on 9 March 2016, but resuming operations to Geneva on 18 November after a five-year hiatus. When looking at the routes from a geographical point of view, the airline serves six destinations in mainland Africa, four in the Indian Ocean (excluding Mauritius), four in China, three each in Europe and India, Perth in Australia, and Singapore plus Hong Kong in Asia. Looking ahead to 2018, the only new route that Air Mauritius is currently scheduled to launch is Amsterdam, with services to the airline’s fourth European destination after Paris CDG, London Heathrow and Geneva expected to begin on 26 March. 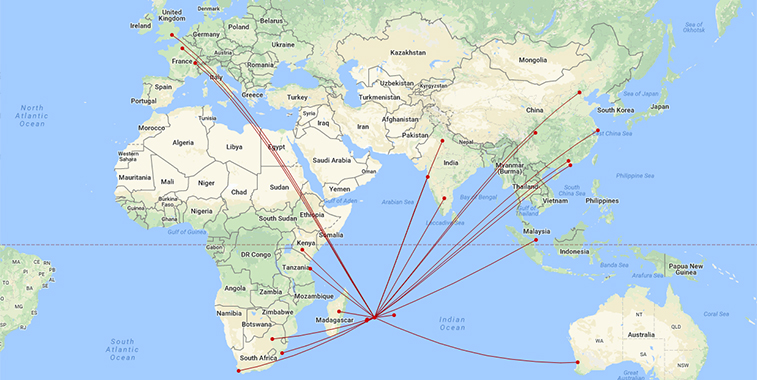 Air Mauritius serves 23 destinations non-stop from its hub, with its fleet size currently being 14 aircraft (up to 31 October). The latest destination to join the carrier’s network was Geneva on 18 November, while the last route it dropped was Kuala Lumpur at the start of S16. The next new link will be Amsterdam starting 26 March 2018.