Tigerair Australia roars into its 11th year; home base of Melbourne growing fast Tigerair Australia cabin crew, along with Toby the Tigerair mascot, had a roar-some time last week celebrating the airline’s 10th birthday at its Melbourne home base. The LCC is currently the fourth largest carrier in the domestic market in terms of weekly seats.

Tigerair Australia celebrated its 10th birthday last week, having commenced services in the Australian domestic airline market on 23 November 2007 as Tiger Airways Australia. The LCC, which is based in Melbourne, has had its ups and downs, with the Civil Aviation Safety Authority (CASA) of Australia grounding the airline in 2011; as a result, operating bases at Adelaide and Melbourne Avalon were closed, and the LCC initially only operated out of its Melbourne base after returning to the air. On 7 March 2012, Tigerair announced the reopening of a second base at Sydney. On 22 October of that year, CASA stated it was issuing a new safety certificate and lifting all restrictions placed on the airline. The last major turning point for Tigerair occurred in October 2014, when Virgin Australia Holdings announced it would purchase the remaining 40% stake in the airline for A$1, taking full ownership. This eventful history has certainly to contributed to the roller-coaster ride in terms of the airline’s annual ASKs and growth witnessed in the graph below. 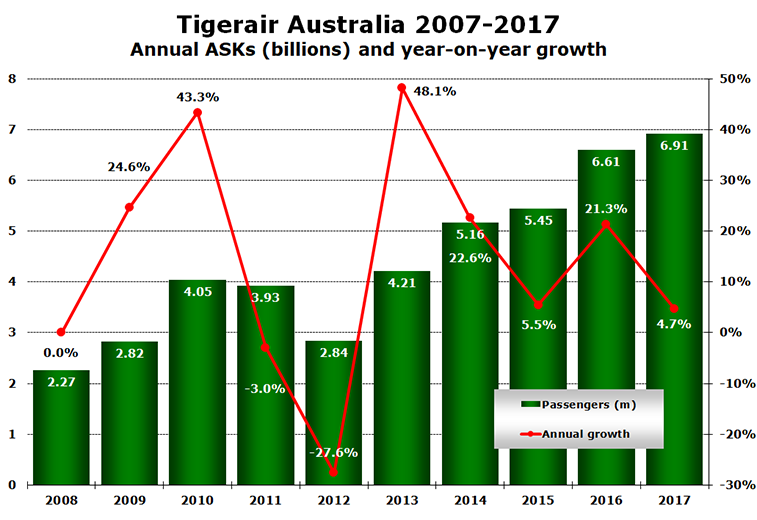 In terms of measurable metrics, Tigerair is currently the fourth largest carrier in the domestic market in terms of weekly seats (behind Qantas, Virgin Australia Airlines and Jetstar Airways). For ASKs it maintains the same position behind the same airlines, however in terms of weekly domestic frequencies it slips to fifth place, behind Regional Express. According to ch-aviation, Tigerair currently flies 14 A320s as well as three 737-800s, presumably from parent (and 737-800 operator) Virgin Australia Airlines.

Double-digit growth at Melbourne base

Unsurprisingly, the LCC’s biggest airport in terms of weekly seats is its Melbourne base. Not only is the airport the airline’s #1 operation, but it is exhibiting robust annual growth of 11% versus the same week in 2016. However, Tigerair’s fastest growing airport over the past 12 months is Proserpine, which has grown by 200% from a base of just 720 weekly seats. Four times weekly services from Sydney to the Queensland destination were operated last November, but in the same month this year this has been increased to daily, along with the introduction of a five times weekly route from Brisbane. There are two new entrants to the LCC’s top 12 airports (highlighted in light green), with Canberra (eight flights per week from Melbourne and three from Brisbane) and Townsville (four times weekly from Melbourne) now appearing in this graph. 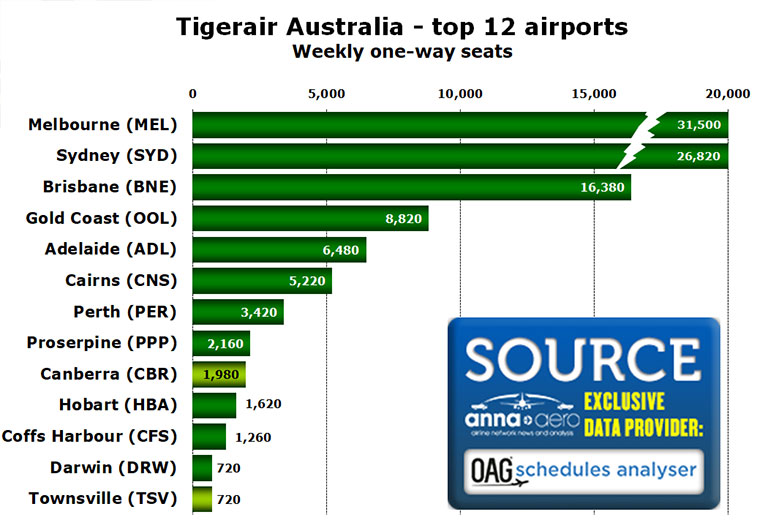 In November 2016, Tigerair’s top 12 airports also featured an international destination, as Denpasar was in eighth spot a year ago, with daily flights to Melbourne and Perth, as well as five times weekly from Adelaide. In the last 12 months these sectors have been withdrawn totally by the airline. Three airports have observed capacity cuts since November 2016, with Perth down 28%, Darwin trimmed by 20% and Adelaide reduced by 11%. Overall, the number of seats operated at the top 12 airports has risen by 8.5% year-on-year.

Nine out of 12 top routes growing

The connection between Tigerair’s two bases is also its largest in terms of weekly frequencies flown by the carrier. Despite being the most flown domestic route, with over 105,000 weekly seats being flown by four airlines, the sector clearly has some room for growth for the LCC, as it has added 16% more frequencies on the city pair since last November. Further down the top 12, Brisbane-Cairns is the fastest growing route, posting an annual increase of 57% (up from daily to 11 weekly frequencies). 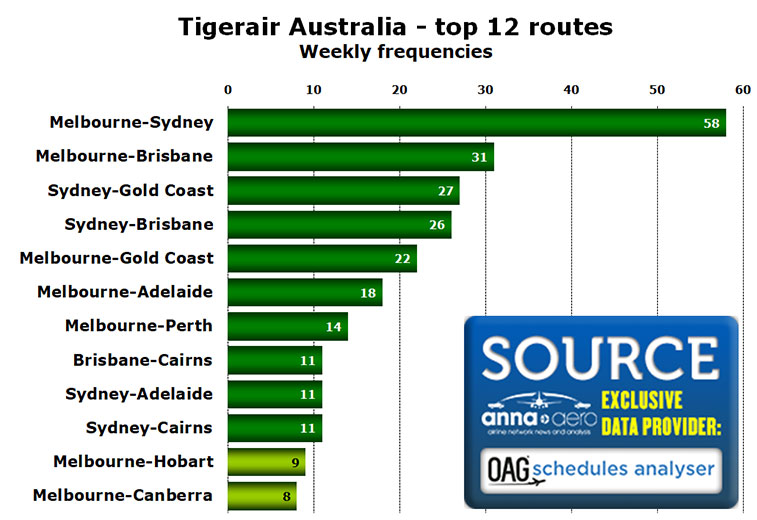 There are two new entrants to the top 12 routes (highlighted in light green), with fresh links from its home base to Hobart and Canberra now featuring. Lost from the airline’s most important airport pairs is Melbourne-Cairns, which was last year’s #9 biggest route in terms of weekly services, but as a result of being cut back to a daily operation, it no longer features. While two routes have remained static in the schedules since November 2016 (Melbourne and Sydney to Adelaide), only one has been reduced, with Sydney-Gold Coast losing just one weekly frequency (down from 28 to 27).

Which hunting grounds next for Tigerair?

On the occasion of airline’s 10th birthday, we asked it what direction we could expect the airline’s network planning to take over the next 10 years. “Tigerair is continually reviewing its network to ensure it is aligned with customer demand and our operational requirements,” says Commercial Director Andrew Maister. “This year, Tigerair has expanded its network by launching four new routes: Brisbane – Whitsunday Coast; Brisbane – Perth; Melbourne – Townsville; and Brisbane – Canberra. We will also be launching new services between Hobart and the Gold Coast on 7 December 2017.” No clues there then. 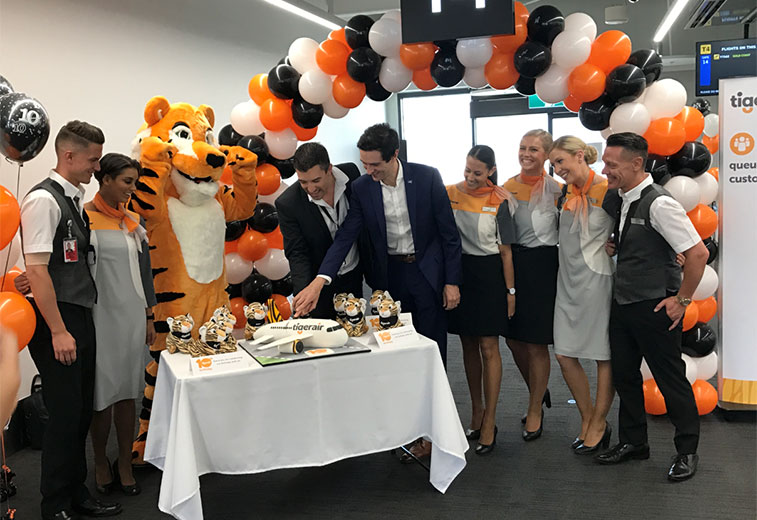 Toby the Tigerair Mascot, along with Tigerair Australia cabin crew, help Andrew Maister, the LCC’s Commercial Director and Ryan Both Head of Aviation Commercial Melbourne Airport to cut the cake celebrating the airline’s first 10 years of operation. In terms of future network development, and indeed where we might see more cake, the airline is launching services from Hobart to Gold Coast on 7 December.