A350 focus: Qatar is the largest operator and Hong Kong has the most departing seats; sectors vary from intra-regional to ultra-long range 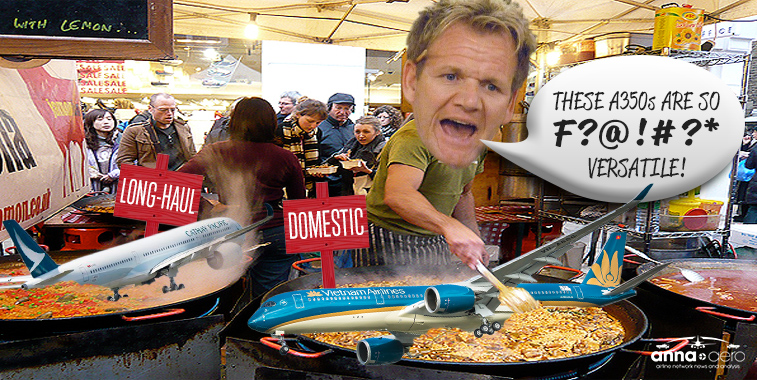 Airlines have deployed their A350s on a wide variety of sector lengths since Airbus’ all-new wide-body first entered service in 2015. The long-haul airliner is flown on sectors of more than 13,000 kilometres, but is also used on routes of less than 500 kilometres in 2017. The airport pair with the most A350 capacity in 2017 is the 1,159-kilometre sector between Ho Chi Minh City and Hanoi in Vietnam, demonstrating how network planners have cooked up all manner of uses for the versatile aircraft.

More than 20 million seats will be flown on A350s during the course of 2017. The A350-1000, which is the largest variant of the A350 family, was granted type certification by European and US airworthiness authorities on 21 November, clearing it to enter airline service. The manufacturer hopes to deliver the first example to launch customer Qatar Airways before the end of the year. The Doha-based carrier was also the launch customer for the A350-900, the only variant from the family to enter service so far.

The first A350-900 was delivered to Qatar Airways in December 2014. According to Airbus, 122 A350-900s had been delivered up to 31 October 2017, while a further 559 remain on order, along with 169 A350-1000s. The Airbus delivery report shows that the largest A350 operators at the end of October were Cathay Pacific Airways with 19 aircraft, and Qatar Airways and Singapore Airlines with 18 each. Unsurprisingly, these carriers are the top three A350 operators based on published capacity for the type in 2017. The pace of deliveries is increasing with the number of airlines operating A350s increasing from 10 in 2016, to 18 in 2017 (or 19 if LATAM Airlines and LATAM Airlines Brazil are classified as separate carriers). 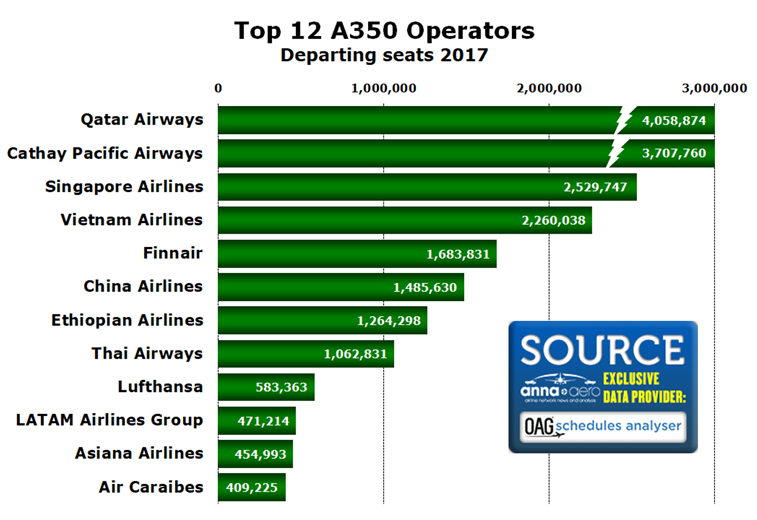 The four largest A350 operators in 2017, and seven of the top 12, are based in the Asia Pacific region.  China Airlines saw the strongest year-on-year A350 capacity growth among those carriers that also operated the type in 2016, with a 1,090% increase in seats. The scale of this increase is, in part, because the carrier only received its first A350 in September 2016, so 2017 is the type’s first full year in service with the airline. Three of the 12 largest A350 operators, Lufthansa, Asiana Airlines and Air Caraibes only began scheduled A350 operations in 2017.

Airports in the Asia Pacific region account for seven of the top 12 origin points for departing capacity on A350-operated flights in 2017. In most cases this is because they are hubs for the largest A350 operators. Hong Kong offers more departing seats than Doha because it is home to two A350 operators, Cathay Pacific and Hong Kong Airlines, with the latter receiving its first aircraft in September. 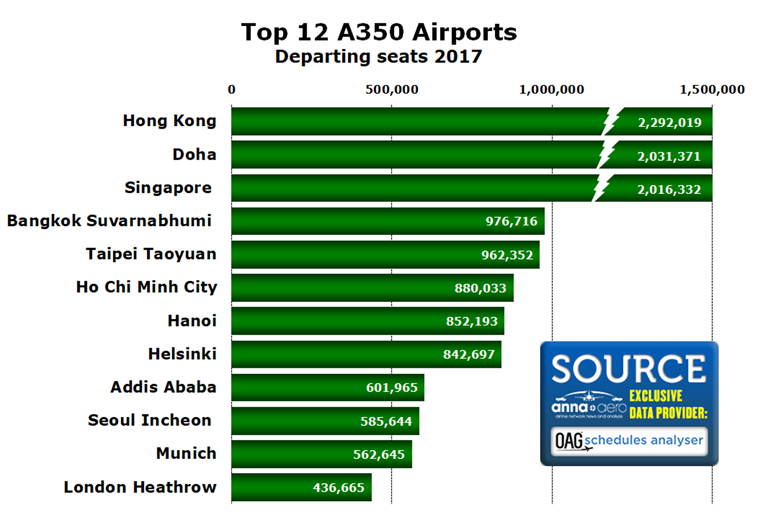 Helsinki, Munich and London Heathrow were the only European airports among the top ranked A350 departure points and there were no North American airports in the top 12. This could change in the coming years as Delta Air Lines began A350 operations in 2017. The top 12 airports which experienced the strongest percentage growth in A350 capacity from 2016 to 2017 were Taipei Taoyuan, Addis Ababa, Munich and Hong Kong, which experienced increases of 679%, 346%, 342% and 332% respectively.

anna.aero’s New Routes Database shows that airlines have launched eight new services with A350s since 2015, indicating that in many cases the aircraft has been used to complement or replace other types to improve efficiency on existing routes. Seven of the eight new routes are brand new airport pairs that were not being served by other carriers at the time of launch. Three of the new routes were launched by Cathay Pacific, with two each started by Qatar Airways and Singapore Airlines and a single new airport pair opened by Finnair. Seven of the eight routes are non-stop direct services. Singapore Airlines’ Stockholm Arlanda service from its Singapore base operates via a stopover in Moscow Domodedovo. At least eight further routes will be launched with A350s in W17/18 and S18 and these are listed in the table below.

Cathay Pacific will launch a further four new routes with A350s, while Hong Kong Airlines is due to commence two and China Airlines and Finnair one each. Six of the eight planned new routes will be new airport pairs, with no incumbent carriers serving them. Only Hong Kong Airlines’ two routes to the US will face existing competition. There has been a focus on long-haul connections, where A350s have been used to launch new services. The eight services started with A350s so far have an average sector length of 9,899 kilometres, while the eight that are planned to start soon have an average route length of 9,818 kilometres.

The majority of routes launched by the A350-900 since it entered service can be classified as long-haul, but airlines have also introduced the aircraft on existing services and the type is currently operating over a wide variety of sector lengths. The shortest A350-operated airport pair is the 293-kilometre sector from Singapore-Kuala Lumpur, while the longest is the 13,575-kilometre link between Singapore-San Francisco – both routes are flown by Singapore Airlines. 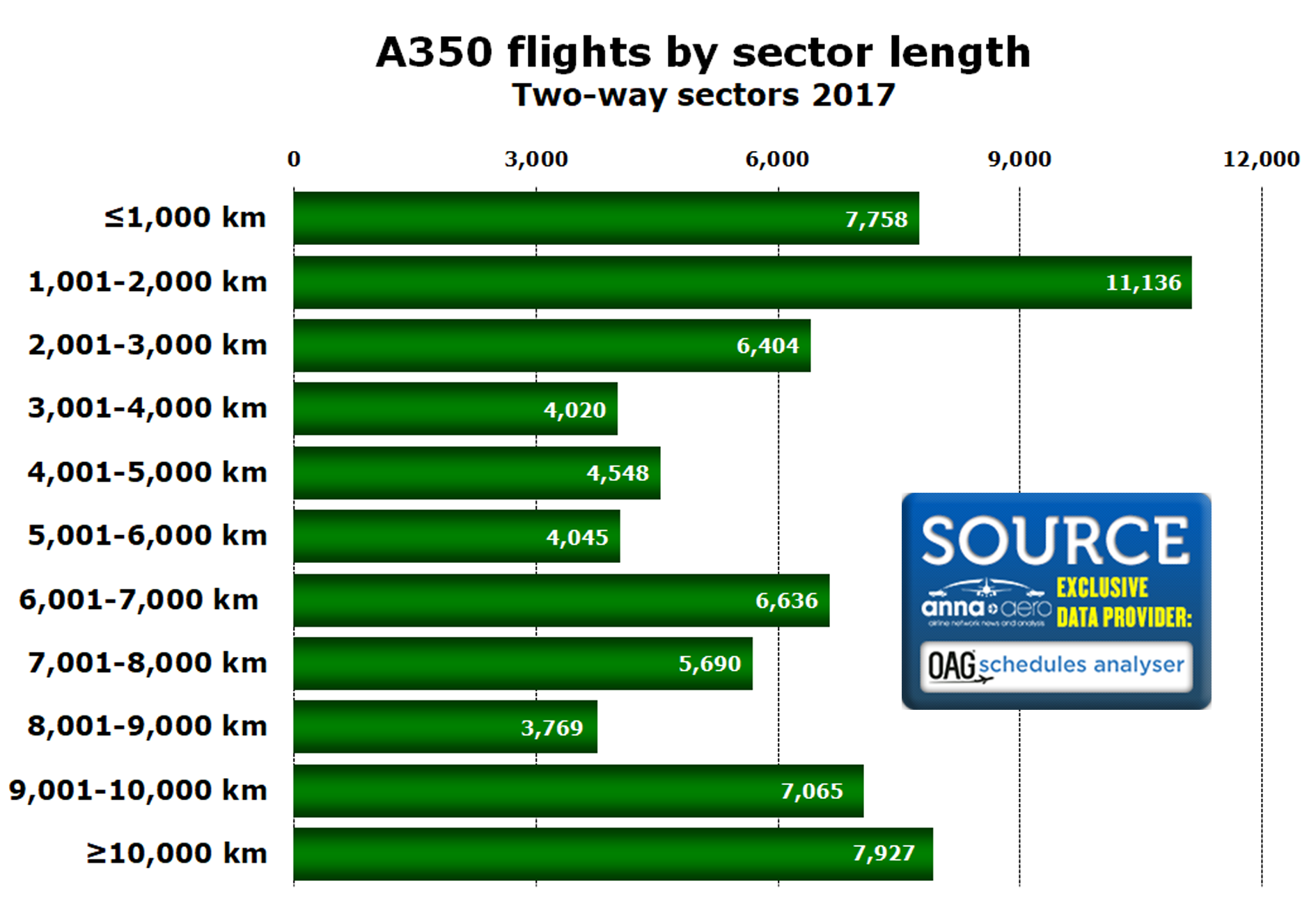 A significant number of A350 frequencies are operated on long-haul links, with 22% of all flights flown on sectors of 9,000 kilometres or longer. There are also a large number of shorter sectors operated by A350s however, with more than one quarter of all flights flown on route lengths of 2,000 kilometres or less, and 11% operating on sectors that are shorter than 1,000 kilometres. Some of these frequencies might be the result of airlines deploying their new aircraft for route proving trials, but others appear to be regularly scheduled operations.

The airport-pair with the most A350 capacity in 2017 is the 1,159-kilometre domestic link between Hanoi-Ho Chi Minh City in Vietnam, with nearly 500,000 one-way seats available. OAG schedules show that Vitenam Airlines will operate 36 A350 frequencies on this airport pair during the week commencing 28 November. Intra-Asia Pacific links account for four of the five largest A350 routes based on published capacity in 2017. The others are Taipei Taoyuan-Hong Kong, Singapore-Hong Kong and Hong Kong-Bangkok Suvarnabhumi. 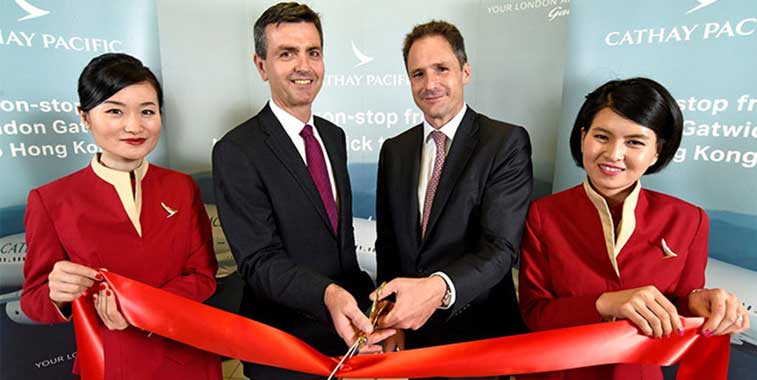 Airlines have used the A350 to launch eight new routes since the aircraft first entered service in 2015 and there are at least eight further links planned to launch with the type in W17/18 or S18. In September 2016, Guy Stephenson, CCO of London Gatwick Airport and Neil Glenn, GM Europe, Cathay Pacific Airways celebrated the airline’s return to the airport it last served in 1993, with a new A350 link commencing to Hong Kong.