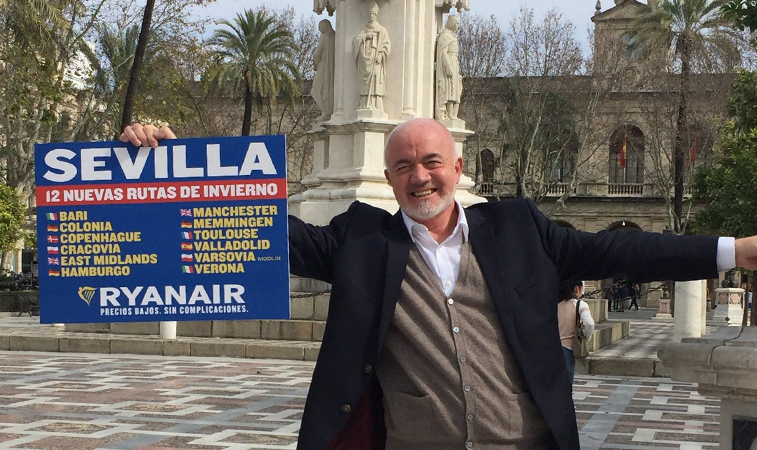 Earlier this year Ryanair’s CCO David O’Brien announced a wealth of new routes from Seville, with two being to Bari and Verona in Italy, sectors which were inaugurated on 30 October. In total it has launched 15 routes between Italy and Spain in 2017. The country pairing is dominated by LCCs including Ryanair, Vueling and easyJet, with these three alone accounting for 70% of one-way seats in 2017. Ryanair itself will fly three million seats between the two nations this year.

Italy and Spain are home to two of the largest populations in Europe, with them both also being two of the most developed economies in the world, so air service links between the two are well established. Over the past few years, seat capacity on flights between the European country duo has been on the upwards curve.

In 2017 around 15.92 million seats will be available across nearly 90,000 flights between Italy and Spain. This is more than at any other point over the past 10 years and represents a 30% increase in capacity when compared to 2008. The average seat availability per flight in the Italy–Spain market increased from 154 to 178 seats during the same period. From 2008 to 2017, the market witnessed two periods of strong growth either side of a slump which occurred between 2011 and 2013. 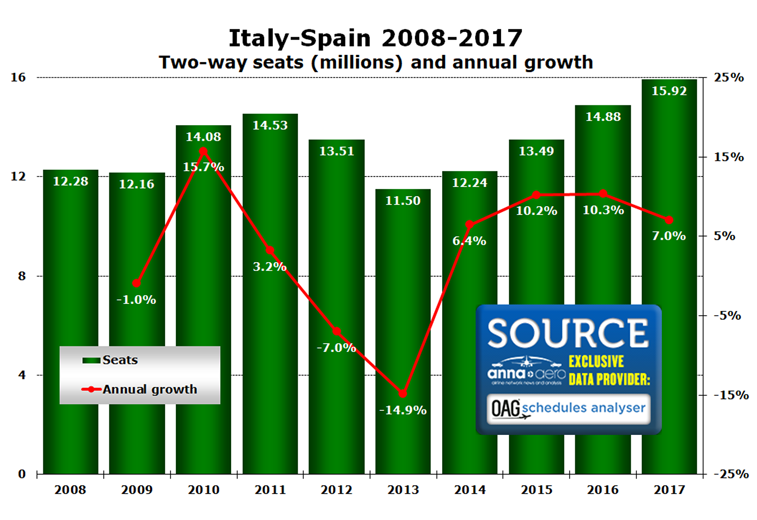 From 2009 to 2011 the number of seats available between Italy and Spain increased by 19% to about 14.53 million. This was then followed by two years of heavy cuts which led to capacity shrinking by 21% from 2011 to 2013. A number of airlines chopped seats during this period, including the respective flag carriers of Alitalia and Iberia, plus LCCs Ryanair and easyJet. Since then there has been a strong recovery with four years of consecutive growth, including double-digit capacity increases in 2015 and 2016. From 2013 to 2017 the number of annual seats available between Italy and Spain has increased by 38%.

The top 12 airports for departing seats between Italy and Spain feature six from each country respectively. This analysis considers there to be four main hubs in the market, namely Rome Fiumicino and Milan Malpensa in Italy, along with Madrid and Barcelona in Spain. These hubs top the charts for the most departing capacity in the Italy–Spain market, with the quartet accounting for more than half of all available seats in the country pairing between them in 2017. 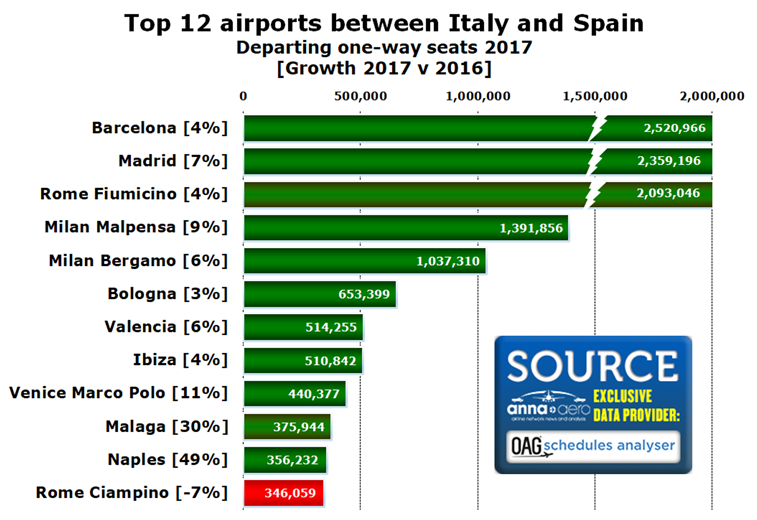 From 2016 to 2017, Naples and Malaga, which are normally associated with leisure traffic, were the top ranked airports with the strongest capacity growth in this market, witnessing 49% and 30% increases in departing seats respectively. Naples saw the introduction of Ryanair services to Spain, plus increased capacity from easyJet and Iberia, while Malaga experienced additional capacity from Alitalia, Ryanair and Norwegian. The only top-ranked airport to see a decline in capacity in the Italy–Spain market between 2016 and 2017 was Rome Ciampino (highlighted in red), with Rome’s second largest airport seeing capacity be reduced by 7%.

The four main hub airports maintain a central role in the country market in 2017, accounting for 8.37 million departing seats, which is equivalent to 53% of the total available capacity. The percentage of overall seats departing from one of the four hubs has fluctuated over the past 10 years. In 2008 the four accounted for 56% of all capacity, but this fell to 51% in 2011 and remained at 52% during 2012 and 2013 when significant capacity reductions were experienced in the market. The hubs increased their market share to 54% in 2014 and 2015, but since then departing capacity from non-hub airports has witnessed stronger percentage growth. 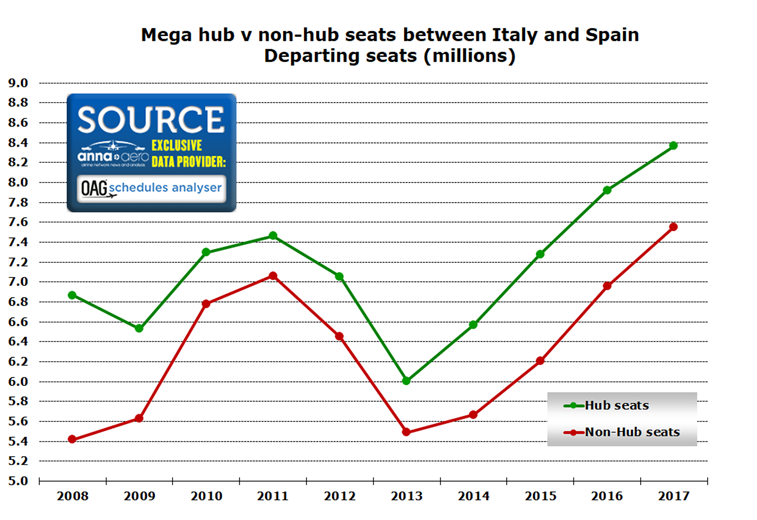 From 2015 to 2017, the number of seats departing from non-hub airports in the Italy–Spain market increased by 22%, comparing to a 15% increase from the main hubs. anna.aero’s New Routes Database shows that airlines launched a total of 37 new services between Italy an Spain in 2017. Among these 37 routes, 15 serve one of the four mega hubs, but the remaining 22 connect non-hub airports, indicating that there is an increasing trend for point-to-point services between the two nations.

The flag carriers of Alitalia and Iberia only account for 19% of  one-way seats from Italy to Spain in 2017. This is a market dominated by LCCs, with Ryanair, Vueling and easyJet providing 70% of all one-way available capacity. Ryanair has added seats to Spain from a number of new Italian airports in 2017, including Naples and Venice Marco Polo. anna.aero’s New Routes Database shows that the Irish carrier has added 15 new routes in the European country market this year, with 11 originating from Italian airports and a further four starting from Spain. 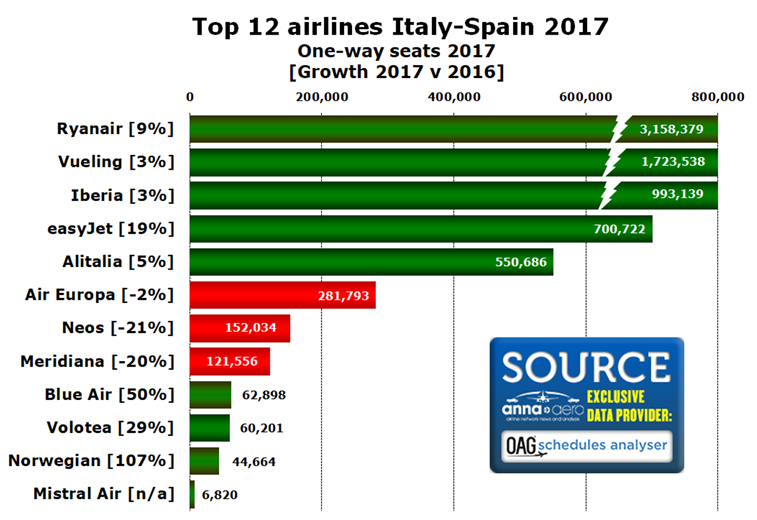 Norwegian saw the strongest percentage increase in seats between the two nations among the top 12 airlines in the market this year, albeit from a small base. The LCC increased capacity on services linking its Gran Canaria, Malaga and Tenerife South bases with Rome Fiumicino. LCCs Volotea and easyJet also saw double-digit increases in capacity from Italy to Spain between 2016 and 2017, while Air Europa, Neos and Meridiana (highlighted in red) all cut their available capacity in the market. OAG schedules show that Ethiopian Airlines and Singapore Airlines also provide seats between Italy and Spain as part of their respective Addis Ababa–Rome Fiumicino–Madrid and Singapore–Milan Malpensa–Barcelona itineraries, however neither of these have traffic rights between the two markets when referring to their online booking engine. 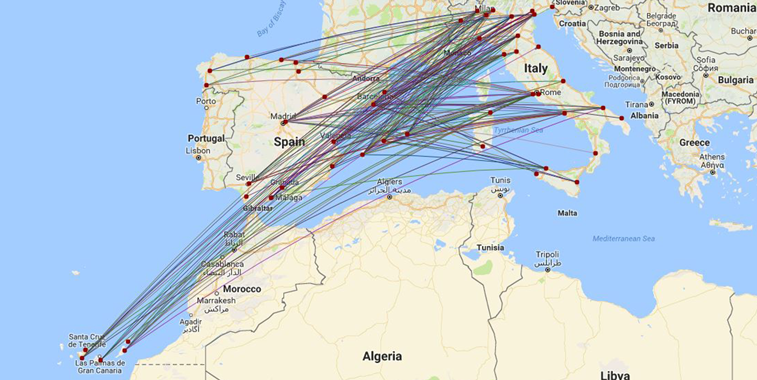 There are 15.92 million seats available on nearly 90,000 flights between Italy and Spain in 2017. Capacity in the Italy–Spain market has seen strong growth over the past four years, with the number of seats increasing by 38% between 2013 and 2017. This route maps shows destinations ranging from Venice in North Italy to the Spanish Canary Islands.