Melbourne-Phnom Penh is “Skyscanner Unserved Route of the Week” with over 140,000 searches; one for Jetstar to jump onto?? 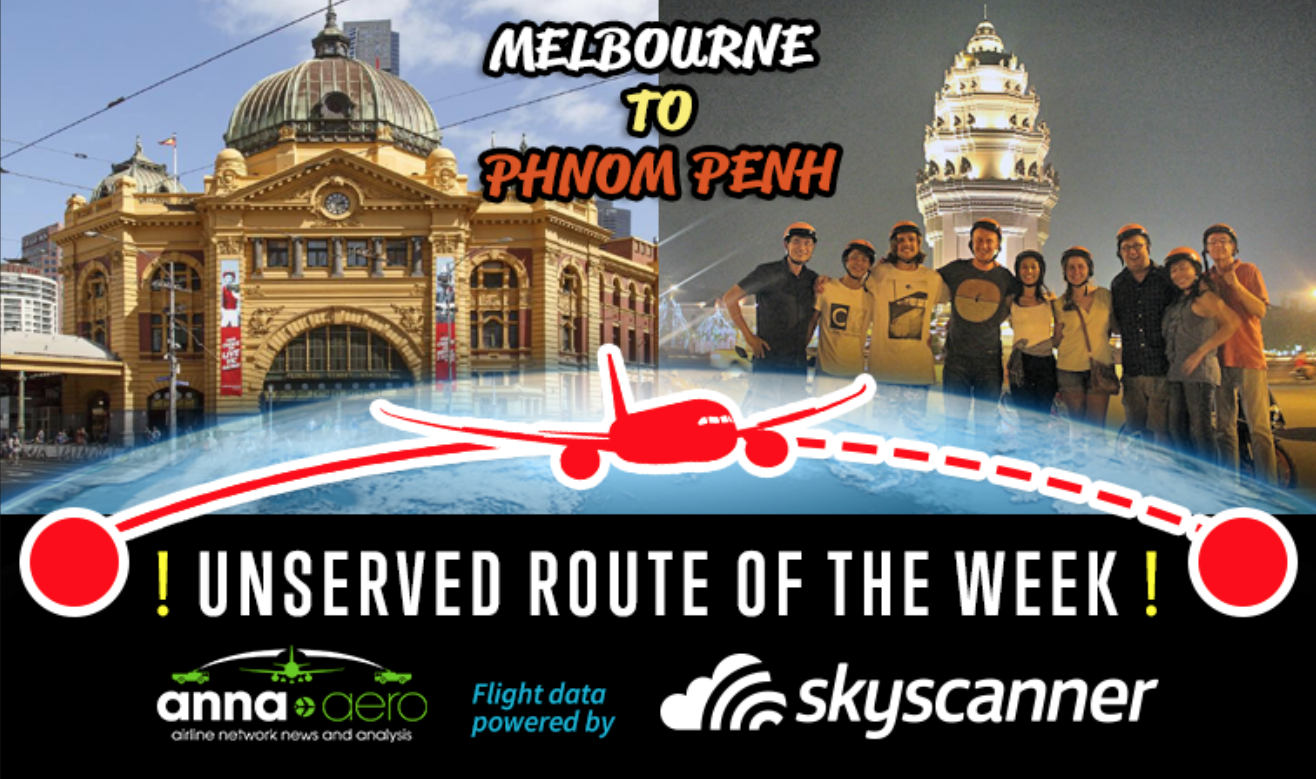 Two great spots for selfies – in front of Melbourne’s iconic Flinders Street railway station or Independence Monument in Phnom Penh – however tourists looking to get between the two typically have to fly via Singapore or Bangkok. With 140,000 travellers per year keen to snap their holiday shots in either destination, surely this city pair is a must for S18 for any carrier with an interest in the Cambodian or Australian markets.

With over 140,000 searches in the last year, a potential city pair from Melbourne to Phnom Penh has been identified as this week’s “Skyscanner-anna.aero Unserved Route of Week” – a powerful analysis based on aspirational data captured from the Skyscanner.net flight comparison site used by +60 million unique visitors per month. “Total traffic between Cambodia and Australia in the last 12 months was 134,000, growing steadily at 6% per annum for the last three years, with Melbourne capturing one third of the traffic,” states Ryan Both, Head of Commercial Development at Melbourne Airport. 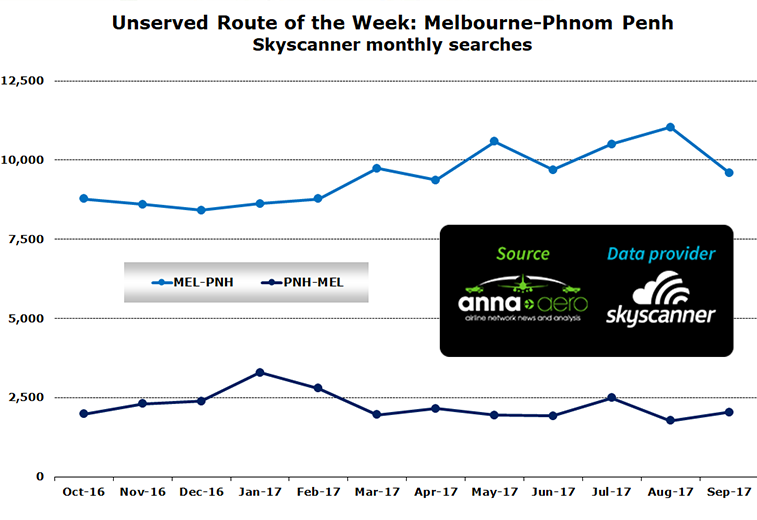 anna.aero commends Jetstar or Virgin Australia to connect to Cambodia

Skyscanner demand on this week’s unserved route shows a preference towards the Melbourne end of the city pair, with a 81/19 split, so on this basis we looked at potential carriers at the Australian origin first. According to OAG schedules for the week commencing 28 November, the largest carrier at Melbourne is Qantas (30% share of weekly seats). The airline’s 22-destination non-stop route network from the Australian city presently consists of just three Asian destinations – namely to Singapore (10 times weekly) Hong Kong and Tokyo Narita (both daily). The oneworld carrier clearly has intercontinental expansion on its radar having started the Narita service last December, but looking forward, Qantas has just one new route panned from Melbourne, according to anna.aero’s New Route Database, a three times weekly domestic sector to Kingscote, starting next month.

Perhaps Qantas’ in-house LCC Jetstar Airways, and Melbourne’s third largest carrier (24% of weekly seats), is better positioned to take up this particular new route opportunity. Having launched three times weekly services to Ho Chi Minh City in May, and a twice-weekly Zhengzhou route scheduled to begin in December, the region seems to be more of a focus for the daughter company rather than the parent at this time.

Melbourne’s second biggest carrier is Virgin Australia Airlines (24% share of weekly capacity), offering nearly 105,000 one-way weekly seats across a 20-destination non-stop network. Similar to its nemesis Qantas, it currently has limited long-haul Asian services from the airport. In fact it only recently (in July) started five times weekly services to Hong Kong, so a new service to Cambodia would not require a seismic shift in the airline’s network planning strategy. Additionally, in now having access to this compelling Skyscanner data to boost the business case, a route from Melbourne to Phnom Penh would seemingly be that little bit more likely. 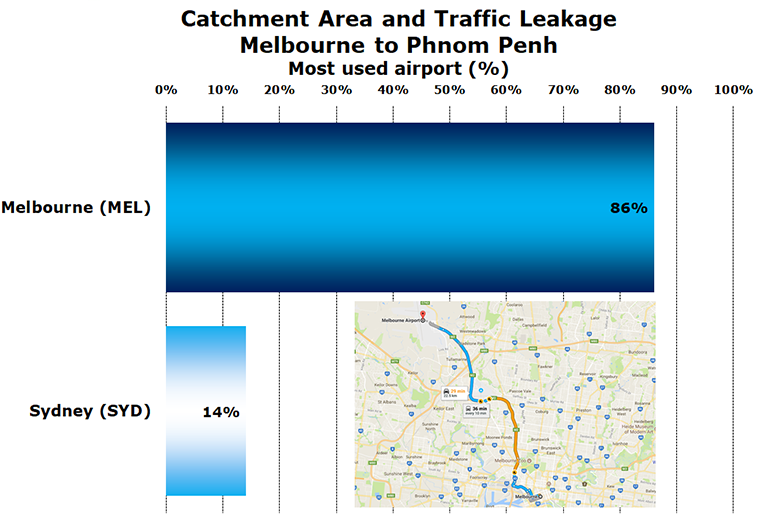 Matt Williamson Skyscanner’s Commercial Executive says: “Melbourne serves 86% of the catchment (50 km around the airport) going to Phnom Penh. With better service, such as a non-stop operation, the traffic could grow by 17%.”

Contemplating the Phnom Penh end of the route, the airport’s #1 capacity provider of its current 33 serving airlines is the flag carrier Cambodia Angkor Air, which offers just 8.5% of weekly seats. The carrier, which is still less than 10-years-old, currently has a fleet of just seven short-haul aircraft – one A321, three A320s and three ATR 72s (according to ch-aviation fleet data). The airport’s third largest airline (6.9% share), which only launched operations this spring, is JC International Airlines, and again it only has aircraft allowing it to fly domestic and regional services rather than long-haul routes, with a fleet of three A320s at this time. So purely on an operational basis it is unlikely that either carrier will be jumping onto this intercontinental city pair in the short-term. The second largest airline at the Cambodian capital city airport – Bangkok Airways – can also be disregarded as a potential operator to Melbourne, as it is will be concerned about traffic between Thailand and Cambodia only. “It is exciting to see that inbound traffic from Cambodia to Melbourne has been growing at 23% per annum over the last year,” adds Both.

When looking at the previous year of search data, the busiest month for potential traffic flows (for both directions on the route combined) is July 2017, with nearly 13,000 searches, over 2,000 higher than the lowest monthly figure, which was recorded in October 2016 (10,800 searches). The seasonality profile of this search data is extremely flat, with the low-month traffic representing 83% of the highest month – one of the best results seen in over 80 of these reports. According to OAG Traffic Analyser, because there is no direct service, the top three connecting options chosen by those passengers who did book travel between Melbourne and Phnom Penh in the last 12 months (year ending September 2017) indicates that the majority of connecting travellers used Singapore (44%), Bangkok Suvaranabhumi (34%) and Kuala Lumpur (14%). When observing the traffic flows in the opposite direction, the same three airports dominate again, with Singapore increasing its share, but with the other two airports marginally losing share. “According to our data the majority of the traffic has been transferring via Singapore, Bangkok and Ho Chi Minh,” confirms Both.

Indeed, an O&D that is not served by a non-stop flight will typically display a low purchase rate and low traffic. In this instance Skyscanner’s Travel Insight indicates a monthly average of 7.6% for the Melbourne to Phnom Penh route (see graph below). Therefore, if there was a Melbourne to Phnom Penh route, and if bookings performed in line with the “Skyscanner market average” for direct services at both airports (8.2%), the airline operating this route could immediately expect an improved purchase rate of 7.9%, without any increased marketing spend. However, with over 140,000 annual searches in the last 12 months, a three or four times weekly service should be immediately viable for the airline choosing to start this potential city pair. “In addition to the inbound growth trend, we see potential for the outbound demand to be stimulated, capitalising on Australians’ strong propensity to travel and Melbourne’s seamless connectivity to the catchments of Victoria, South Australia and Tasmania,” concludes Both. 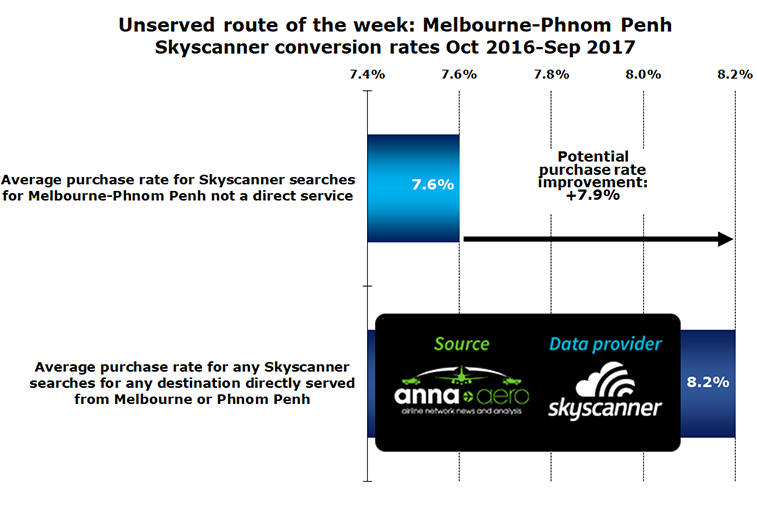