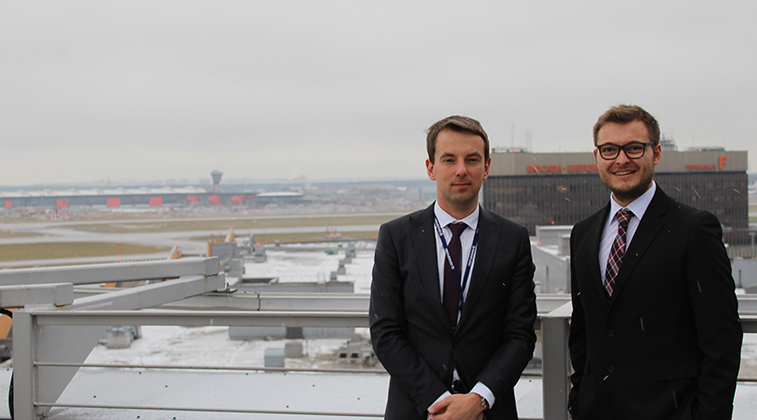 Moscow Sheremetyevo Airport’s Head of Foreign Airlines Division Alexander Nikonov recently welcomed anna.aero’s Assistant Editor Jonathan Ford to a snowy Russian capital for a tour of the city’s busiest airport. Here the duo can be seen at the top of the airport’s Radisson Blu hotel, overlooking the new Terminal B which is currently under construction. The new terminal will have the ability to handle 20 million passengers per annum.

Moscow Sheremetyevo is Russia’s largest airport when it comes to passenger traffic, with it handling 34.05 million travellers in 2016. The airport is growing at a vast rate, with the Moscow hub expected to pass 40 million passengers in 2017. To find out more about the airport’s plans for growth, and how the airport has developed into a major hub player in recent years, anna.aero’s Assistant Editor Jonathan Ford travelled to Moscow to meet with Sheremetyevo’s Head of Foreign Airlines, Alexander Nikonov. 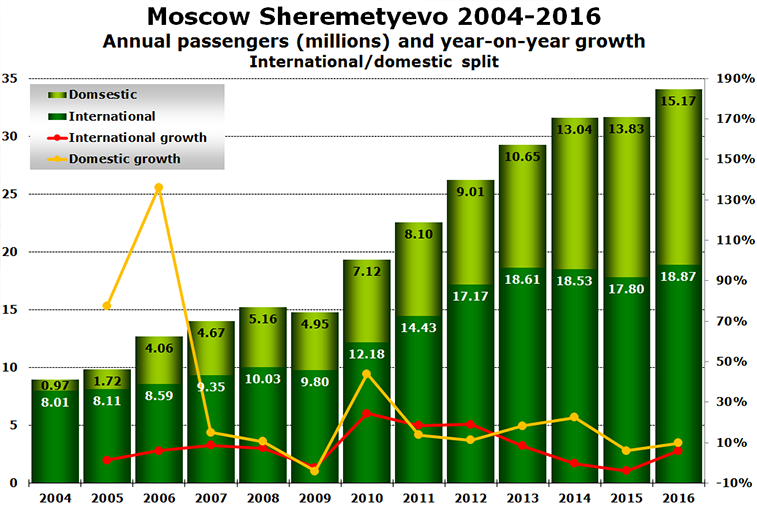 Between January and October this year, Sheremetyevo has already processed 35.98 million passengers, an increase of over 18% when compared to the same period of 2016, and already 5.7% higher than what the airport handled for all of last year. “The traffic of international carriers has grown by 15%,” comments Nikonov, with foreign airlines accounting for 2.9 million of Sheremetyevo’s passengers in 2016. “This is an increase of 3% versus 2015,” added Nikonov. “One factor which has contributed to this growth is that we have welcomed eight new carriers in 2017, namely Beijing Capital Airlines, Taban Air, Qeshm Air, Atlasglobal, Lucky Air, Cobalt, flydubai and RusLine.” Along with welcoming eight new airlines, Sheremetyevo has welcomed new connections to Shenzhen, Qingdao, Chongqing, Lanzhou, Kunming, Krabi, Izmir, Puerto Plata, Rayong, Lisbon, Kaunas, Alanya, Kostanai, Cheboksary, Khanty-Mansiysk, Salekhard, Lipetsk, Paphos, Penza and Kirov this year according to Nikonov. The result means that Sheremetyevo is now connected to 199 scheduled destinations, with 148 of these being international links. 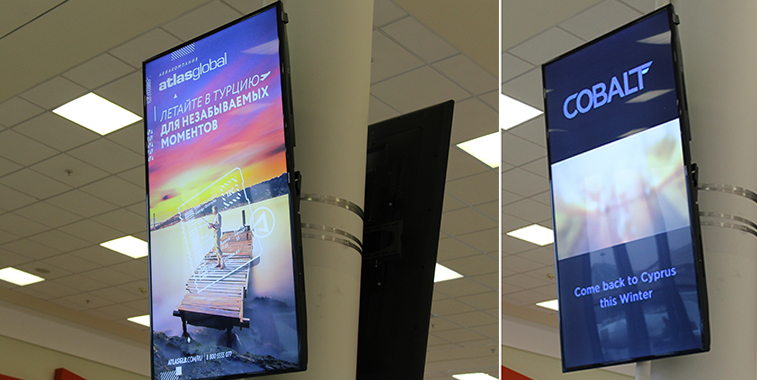 Two airlines which have recently launched flights to Moscow Sheremetyevo are Atlasglobal, from Istanbul Atatürk, plus Cobalt with flights from Paphos. Both airlines have strong presence around the airport promoting their new services. “We offer great marketing support for airlines, including events dedicated to first flights, anniversaries and other special occasions,” comments Alexander Nikonov, the airport’s Head of Foreign Airlines Division.

While the domestic market would appear to be the leading market for growth, all geographical regions are larger than what they were in 2004. While the domestic market in 2016 is over 15 times larger than it was in 2004, other markets from Sheremetyevo have also boomed during the past decade, with the Latin America/Caribbean market nine times larger, Asia Pacific four times larger, Europe over two times larger, and North America and Africa nearly twice as big. “The real gap that we have at the moment is the Middle East, so it is great that we succeeded with gaining flydubai,” informs Nikonov. The carrier will begin flights from Dubai on 29 November, a route that it will operate daily. “What is also great about this route is that Emirates is also promoting the link because of its new partnership with flydubai.” 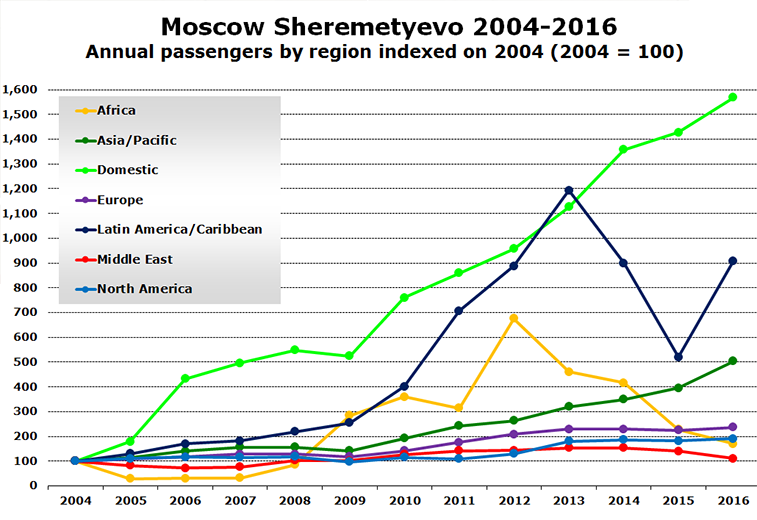 “One of the biggest areas for growth in recent years has been the Asia Pacific region,” informs Nikonov. “In 2010 traffic from the region increased by 36%, while in 2016 we achieved a growth rate of 27%, the year in which we became a China Friendly facility.” In 2016 Sheremetyevo processed 1.65 million passengers travelling to/from China, an increase of 15% when compared to the 2015 total of 1.44 million. With a total of around 1.68 million passengers travelling between Moscow and China last year, it means that just under 98% of all passengers in the market travel via Sheremetyevo, a market share which has increased from 86% back in 2011. “We are now the largest transit hub in Europe between the continent and China,” tells Nikonov. “There are more than 1,500 daily passengers travelling via the airport between European destinations and Chinese cities.” Between January and October this year 1.78 million passengers flew between Sheremetyevo and China, 8.0% more than the total that travelled in the market in all of 2016. During the first 10 months of the year, traffic to Beijing was up 4.0%, Shanghai Pudong 28%, Guangzhou 39%, Chengdu 32% and other destinations 29%. “We expect Chinese traffic to hit two million passengers in 2017, a 23% increase on last year,” adds Nikonov. It should also be noted that traffic to Hong Kong was up 2% during the same period.

With 465,242 passengers flying from St. Petersburg in 2016 and connecting via Sheremetyevo to another destination, it is by far the Russian capital airport’s biggest hub feeder airport. The connection to Russia’s second largest city has been a key link into feeding Sheremetyevo’s hub, with inbound connecting traffic from St. Petersburg increasing by an average of around 14% since 2012. Of the airport’s leading feeder airports, five are long-haul destinations. It should also be noted that two routes, namely Yerevan and Paris CDG, are the only connections to have not seen double-digit feeder traffic growth between 2012 and 2016. 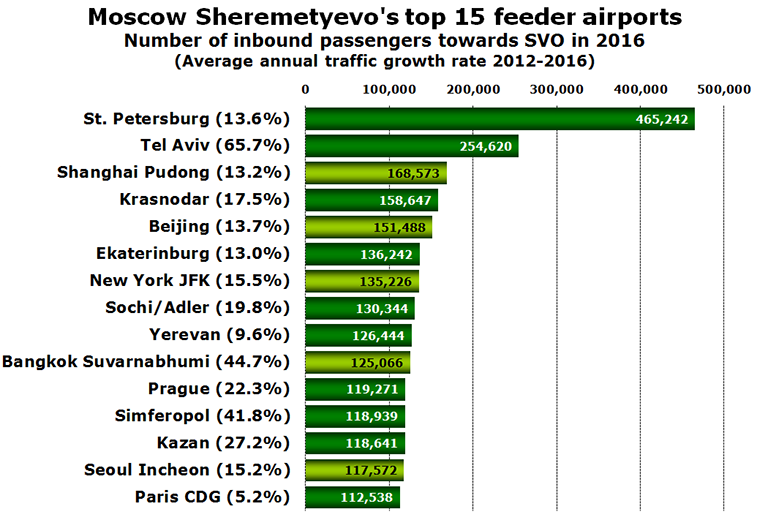 Overall, just under 7.38 million inbound passengers connected via the airport in 2016, representing an average annual increase in connecting traffic since 2012 of just under 17%. The result of the airport’s impressive growth has meant that it has leapt up the global hub rankings, from the 30th biggest connection hub, with relation to passenger traffic, in 2012, to 16th this year. To reach this feat, Sheremetyevo has overtaken major hubs such as Munich (17th in 2016), Los Angeles (18th), Madrid (19th) and Singapore (21st).

“Once all the terminal expansion is completed, Sheremetyevo will have the capacity to handle 80 million passengers per year,” highlighted Nikonov. The airport is currently carrying out many major infrastructure developments, including a new runway to the northern side of the airfield along with a new terminal. “The new Terminal B will have the capacity to handle 20 million passengers per annum, and the new runway will allow the airport to have two runways operating at the same time,” highlights Nikonov. “Along with the new runway and terminal, there will be a new underground inter-terminal tunnel running underneath the airfield to connect the northern and southern sides of the airport.” On top of the terminal and runway infrastructure developments, an additional cargo terminal and fuel complex are also being constructed. 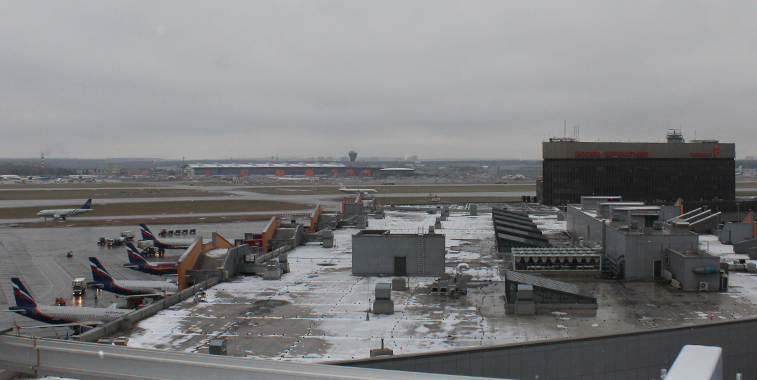 Old meets new! Once completed, Terminal B on the northern side of the airport will have the capacity to handle 20 million passengers. Terminal F in the foreground is expected to see enhancements once Terminal B is completed. What you cannot see in this image is the new inter-terminal tunnel which has been built under the airfield, a project which did not disturb aeronautical activity. Once all infrastructure changes are completed, including the construction of the third runway, Sheremetyevo will be able to handle 80 million passengers per year. Once all infrastructure developments are completed, Moscow Sheremetyevo will we have a capacity to process 80 million passengers annually. The airport is also home to the Business Traveller Award-winning ‘Best Business Lounge in Russia and the CIS’. The airport has a terminal hotel for transiting passengers and signage in English, Russian and Chinese. Along with terminal enhancements, the airport is also the venue for a number of corporate conferences, with some of the companies using on-site facilities including IKEA.