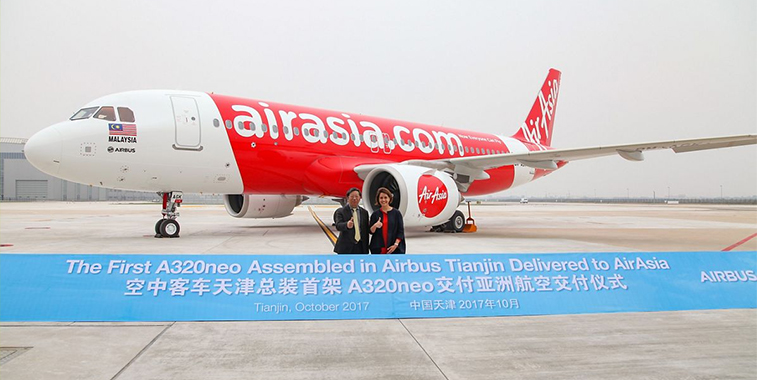 The first A320neo to be assembled in Tianjin was delivered to AirAsia in October. Seen giving their thumbs-up approval to the newest venture for the European manufacturer at the delivery ceremony are Eric Chen, President of Airbus Commercial Aircraft China and Aireen Omar, CEO of AirAsia. “We are very proud to receive the first Airbus A320neo fully assembled in Tianjin, China and we would like to congratulate Airbus, as well as the Chinese Government, for achieving yet another milestone. China is today one of the world’s most important markets for aviation, and we are honoured to be part of the development and rapid growth of China’s civil aviation,” commented Omar.

Airbus and Boeing during October delivered a combined 119 aircraft, 14 less than the 133 units than the two aircraft makers managed to deliver in the previous month, but 11 (10%) more than they achieved in the same month of 2016. By handing over 119 aircraft in, October becomes the fourth best month this year for deliveries, with month 10 of 2017 only being bettered in June (139 units), March (136) and September (133). For only the second time this year, Airbus has outperformed Boeing with regards to deliveries, the only other month being May (Airbus’ 60 units to Boeing’s 57). In October the European giant distributed 63 aircraft, seven more than its North American rival managed.

With that, it means that Boeing’s lead in the 2017 delivery race has dwindled slightly, with the margin it has over Airbus decreasing from 100 units to 93 (up until 31 October). In total, both companies have delivered 1,127 aircraft during the first 10 months of this year, six less than the 1,133 that Airbus and Boeing had sent to customers during the same period of 2016. This represents a marginal drop in productivity, in relation to deliveries, of -0.5% for the time frame analysed. Up until 30 September, this figure was -1.7%, meaning that productivity rates have improved during October.

Airbus delivered 63 aircraft in October, eight more than the 55 it managed in September. The result is also better when compared to the same month of 2016, when the European giant handed over 54 units. For the 10th month of 2017, single-aisle deliveries were led by the A320 (29 units) followed by the A321 (18), with two A319s also being delivered, with both Shenzhen Airlines and Tibet Airlines picking up one each. The leading customer of the A320 was Mexican LCC Volaris, with it collecting three units, while a further four airlines, namely Allegiant Air, China Eastern Airlines, GoAir and S7 Airlines, all receiving two. With regards to the A321, the leading customers were Air Busan, JetBlue Airways and VietJetAir, with all three picking up two each.

In relation to the wide-body market, Airbus delivered 14 units, one less than it managed in September. The leading wide-body aircraft type for a seventh consecutive month was the A350, with eight being handed over to five different airlines, including Air Mauritius, a carrier recently analysed by anna.aero, which collected its first of the type. The leading A350 customer was Qatar Airways which picked up three from the European aircraft producer. Besides the A350, one A380 was received by Singapore Airlines during October, while four A330-300s and one A330-200 were also delivered to various airlines and cargo carriers. 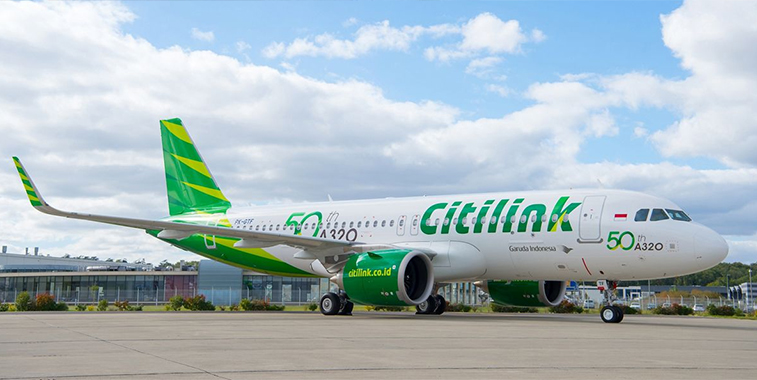 Indonesian carrier Citilink was delivered its 50th Airbus family aircraft in October, with a special 50th livery being produced for the carrier. The airline already has 45 standard A320s and four A320neos, with this being its fifth neo. The airline has 30 more of the aircraft on order for future delivery. It is using its growing fleet to expand its domestic and regional network. 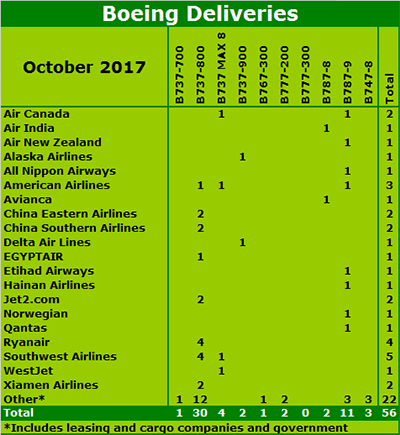 Boeing delivered 56 aircraft in October, 22 less than it provided in September, but two more than it managed in the same month of 2016. Of those 56 deliveries in month 10, four were 737 MAX 8s, meaning that the US giant has now delivered 34 of the type (up until 31 October). The most popular narrow-body unit in October was the 737-800, with 30 being handed over, one more than the 29 it distributed in the previous month. The leading customers of Boeing’s premier narrow-body model were Ryanair and Southwest Airlines, with each collecting four units. In total for October, Boeing handed over 37 narrow-body aircraft, 12 less than Airbus achieved. Along with the 737-800 and the 737 MAX 8, two 737-900s were also distributed in month 10, with Alaska Airlines and Delta Air Lines being the two recipients, with both US airlines being the sole customers of the aircraft type in September and August. 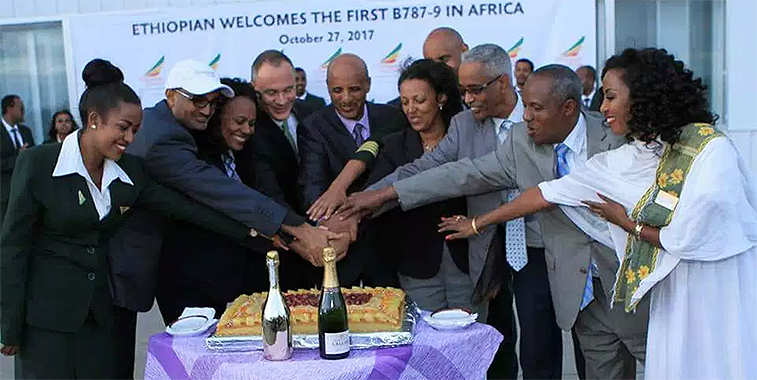 Ethiopian Airlines greeted its first 787-9, on lease from AerCap, with a special ceremony on 27 October, which included a cake! Commenting on the arrival of the aircraft into the African airline’s fleet, its CEO Tewolde Gebremariam (centre) said: “We are proud to celebrate yet another first with the introduction of the cutting-edge 787-9 into our young and fast growing fleet. Today, the 787 is the core of our fleet with 20 aircraft in service. Our investment in the latest technology airplanes is part of our Vision 2025 strategy and our commitment to our esteemed customers to offer complete on-board comfort. We will continue to invest in the most advanced aircraft to give our customers the best possible travel experience.”