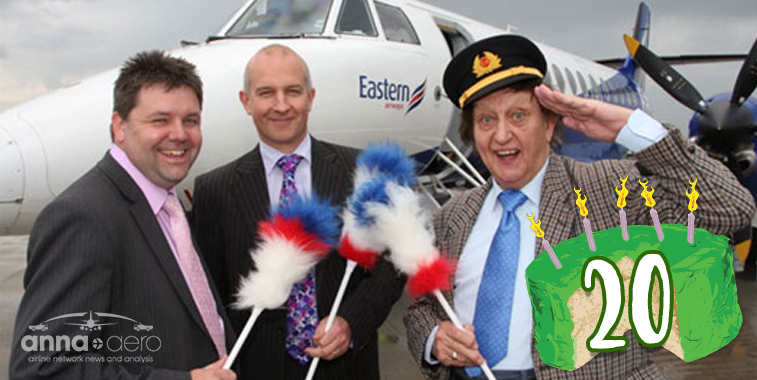 The anna.aero data elves have trawled through our back catalogue of Eastern Airways route launch images to find this beauty from July 2009. At the time, Roger Hage, then Eastern’s Ground Services Manager (he is working for the airline again in his second stint there), Kevin Brown, then MD of both Aberdeen and Southampton airports, and legendary Liverpool comedian Ken Dodd (a year later the airline named one of its Jetstream 41s after Dodd) waved off with tickling sticks the carrier’s first services from Liverpool to Aberdeen and Southampton (both served by three flights each weekday). Neither service operates any more.

Eastern Airways will pass a landmark date this month, entering its third decade of operations since it was founded in December 1997. Its 20 years of scheduled operations started with a service between Humberside and Aberdeen following withdrawal by another carrier. In February 1999 it purchased Manchester-based Air Kilroe, granting the company an Air Operator’s Certificate and giving Eastern a fleet of two Jetstream 32s. Another seismic change in the airline’s fortunes came in 2002 when the first Jetstream 41 entered the fleet, to be followed in March 2003 by another 12 of the type, and perhaps more importantly their associated routes, which were transferred from British Airways CitiExpress. It gave Eastern a springboard into many regional UK airports, some of which which remain important bases, with the Jetstream 41 still the backbone of its now eclectic fleet. According to ch-aviation’s fleet database, The airline still has 12 of the twin turboprops in action, supported by a single ATR 72-600, two ERJ 170s, three ERJ 145s and eight Saab 2000s.

Passenger traffic: more ups and downs than one of its hardworking J41s

Despite being in existence for 20 years, the airline’s passenger traffic figures were not picked up by the UK CAA until 2003, for reasons which are unclear (perhaps it transitioned from having a Type B operating licence to a Type A), so feel free to let us know. Similarly, trying to understand the reasons for all the peaks and troughs in Eastern’s passenger traffic history is about as easy as trying to predict correctly all the scores in all the matches in next year’s football World Cup (the groups were being drawn last week at the time of writing), but our data elves have at least tried to put a handful of useful markers on the graph. 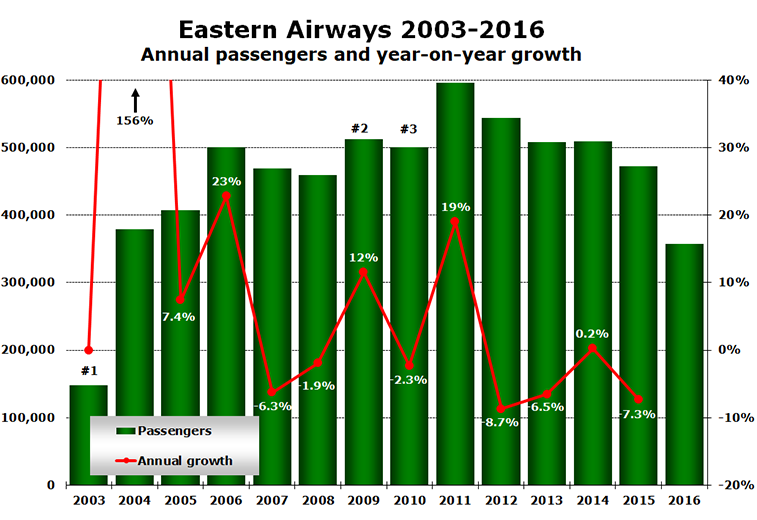 Eastern’s total passenger figure in 2016 was the lowest it has been since 2003, as its operations have continued to be squeezed. Looking at the airline’s traffic for 2017 so far (monthly passengers for January-July), it is anyone’s guess where this year’s figure will end up. While the first four months all produced declines, with an average fall of 8.0%, peaking in February (-18%), May, June and July all delivered year-on-year growth, with the latter period seeing volumes rise by 24% versus July 2016.

Looking at the airline’s monthly traffic flows in 2004 and 2016 it is interesting to see how, if at all, Eastern’s passenger volumes have altered in that time. 13 years ago the regional airline’s busiest month was November, with 9.6% of annual traffic being flown. January was the seasonal low point, with just 6.7% of the year’s passengers climbing on board an Eastern aircraft. By contrast in 2016, the peak month was March, commanding 9.7% of total traffic (November was sixth busiest month with 8.5%), and August provided the least number of passengers with just 7.0% (January was joint eighth busiest month with October). On this basis, there appears to be no clear pattern in the carrier’s seasonality.

Aberdeen still #1 on the network

Serving the air traffic passenger needs of the UK’s oil industry has always been at the heart of Eastern’s network. The ‘headquarters’ of that UK energy business is Aberdeen, so it should come as no surprise that the Scottish city has, and continues to be, the most important airport for the airline. It should also be noted that in February 2014 the Bristow Group, owner of Bristow Helicopters which was previously headquartered in Aberdeen, acquired a 60% interest in Eastern. As a interesting sidebar, Bristow also wholly owns Australian regional airline Airnorth. 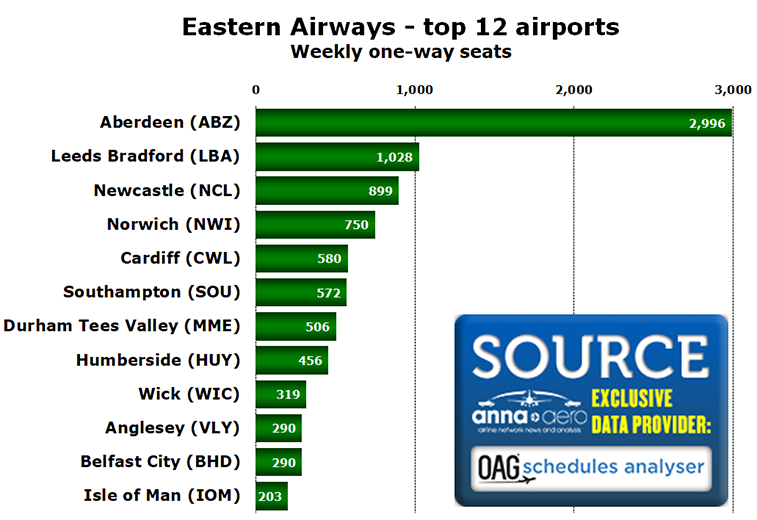 According to OAG schedule data for this week, Eastern serves 16 airports, down from the 20 on its network ten years ago. There are four airports which were in Eastern’s top 12 in 2007, which have not just fallen from the carrier’s most important airports, but are no longer served. These are Birmingham (was fourth ten years ago), Inverness (eighth), Manchester (ninth) and Bristol (10th). Of those eight remaining airports, all of them have less seats now than they did 10 years ago, with Leeds Bradford fairing best (-4.2%), while the Isle of Man’s weekly one-way capacity has plummeted by 77% over that period. In 2007 Aberdeen was also the airline’s  #1 airport as it is today, Newcastle was Eastern’s second most important operation, with Southampton then in third position. Of the top 12 airports, only Anglesey and Belfast City are new entrants to the airline’s network when compared to ten years ago.

In order to understand just how different Eastern’s route network is today when compared to 10 years ago, it is illuminating to consider its ASKs for this week in both years. In 2007, the airline’s routes in the week commencing 1 December offered 8.37 million ASKs, this year it will provide just 3.15 million, a 62% reduction. While a decade ago Eastern offered 20 city pairs, in the same week this year the regional carrier provides just 15, indicating that frequencies have also been cut on those routes which remain served. 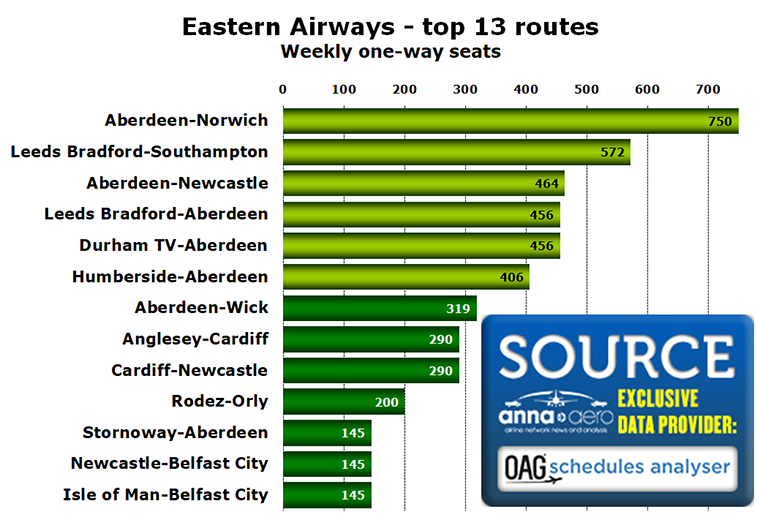 Of the 13 routes listed above, just six were operated in 2007 (highlighted in light green), but these long-standing city pairs have become Eastern’s most important, at least when it comes to weekly seats. Lost from the roll call of routes 10 years ago are the following sectors: Newcastle to Southampton and Birmingham; Aberdeen to Stavanger and Bristol; Isle of Man to Birmingham; East Midlands to Aberdeen; and Southampton to Brussels.

What does the future hold for Eastern?

Eastern’s eventful life in aviation took another unexpected turn into airport ownership, when in August 2012 the group purchased the 82% Manchester Airports Group stake in Humberside Airport. Perhaps more surprising was the announcement in September this year that Eastern would enter a franchise agreement with Flybe, for years its bitter domestic rival, which started on 29 October. The partnership provided a continuation of six branded Flybe routes which were previously flown by Loganair. The sectors now operated by Eastern aircraft are: Sumburgh to Aberdeen, Edinburgh and Glasgow; Aberdeen to Kirkwall; and Glasgow to Stornoway and Manchester. The franchise deal will see all flights operated by Eastern Airways carry BE (Flybe) flight numbers. Whether this type of agreement will see Eastern through the next two decades is unclear – see you in five years time when we hopefully will see the airline celebrating its 25th birthday. 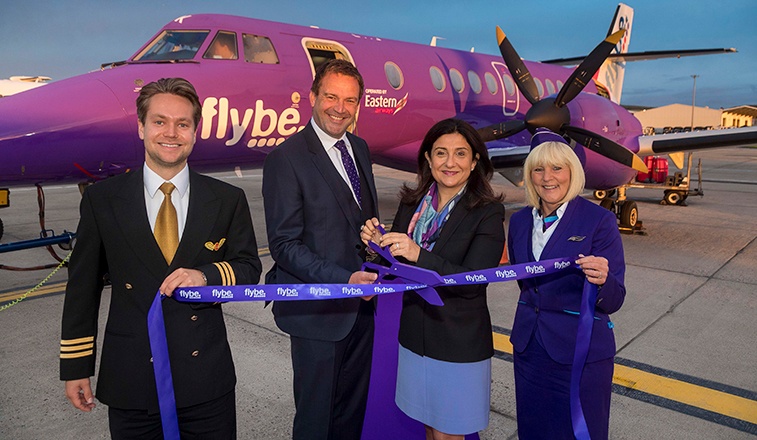