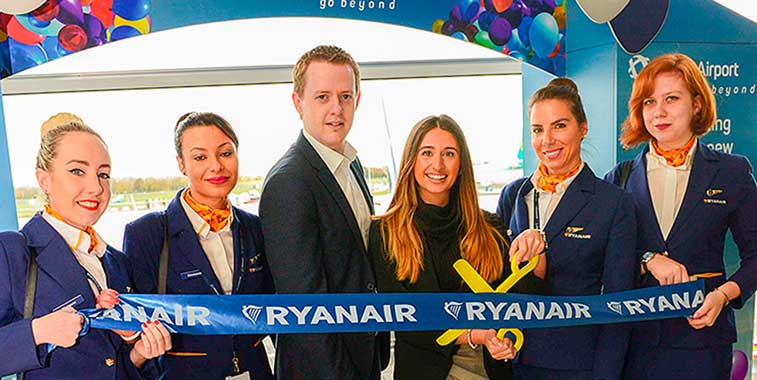 Ryanair is the largest carrier in the Irish market in 2017, accounting for more than 17 million two-way seats. All of the ULCC’s capacity in this market is operated on international links. On 23 November there was a ribbon cutting ceremony at Dublin to mark the launch of the carrier’s new route to Stuttgart, its eighth link to Germany from the Irish capital. Ryanair will serve the 1,199-kilometre route daily.

There are 41.51 million seats scheduled on non-stop services to, from and within the Ireland in 2017. This represents a 4.3% increase compared to 2008. The Irish market experienced considerable capacity cuts in the wake of the global economic downturn, with seat numbers falling by 23.8% from 2008 to 2011, but has bounced back, with six consecutive years of growth. From 2011 to 2017 the number of combined, two-way seats on domestic and international services, increased by 36.8%, with a sizable 26.9% jump since 2014.

There have been contrasting fortunes for domestic and international capacity in the Irish market over the past 10 years. In 2008 there were 2.03 million domestic seats available but in the space of four years this had fallen to just over 143,000, a reduction of 93%. The domestic market has never really recovered, reaching its lowest ebb in 2015, when only about 100,000 seats were available. In 2008 there were 10 domestic routes in Ireland, but only two now remain. A significant proportion of this decline will have been a result of the removal of PSO subsidies by the Irish government. There were signs of a slight domestic recovery in 2017, with nearly 137,000 seats on offer, a year-on-year increase of more than one-third. International services also experienced capacity cuts in the immediate aftermath of the global recession, but in recent years they have recovered strongly, finally returning to, and then exceeding 2008 levels in 2016. From 2011 to 2017, the number of two-way seats available on international services increased by 38.8% and they now account for 99.7% of total capacity in the Irish market. 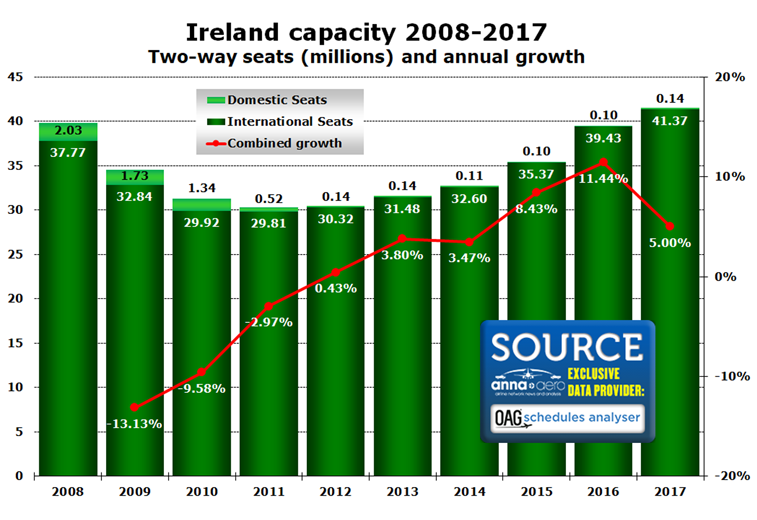 According to anna.aero’s New Routes Database, 24 new routes have been launched to or from Ireland in 2017, all of which were international links. OAG data shows that only six airports in Ireland offer scheduled non-stop services in 2017; Dublin, Cork, Shannon, Knock, Kerry and Donegal. Dublin provides 84.6% of all departing capacity from Ireland and experienced a 5.5% increase in seat numbers from 2016 to 2017. Donegal witnessed the strongest percentage growth during this period, with a 34% increase in departing capacity, while Waterford lost all scheduled services in 2017 and Knock experienced a marginal decline in seat numbers.

Ryanair and Aer Lingus account for 77.6% of all seats to, from and within Ireland, based on published capacity in 2017. Ryanair was the largest carrier in 2008, but the ULCC reduced its capacity in this market by more than one-third from 2008 to 2012. This included a complete withdrawal from Irish domestic services and led to Aer Lingus regaining its spot as the #1 operator from 2011 to 2013. Ryanair again ousted the flag carrier as the leading capacity provider from 2014 onward thanks to its international growth. Aer Lingus remains the second largest carrier for all flights serving Ireland, and is the only airline with published domestic capacity in 2017. It links Dublin to Kerry and Donegal with flights operated by Stobart Air ATR 42s, under the Aer Lingus Regional franchise agreement. 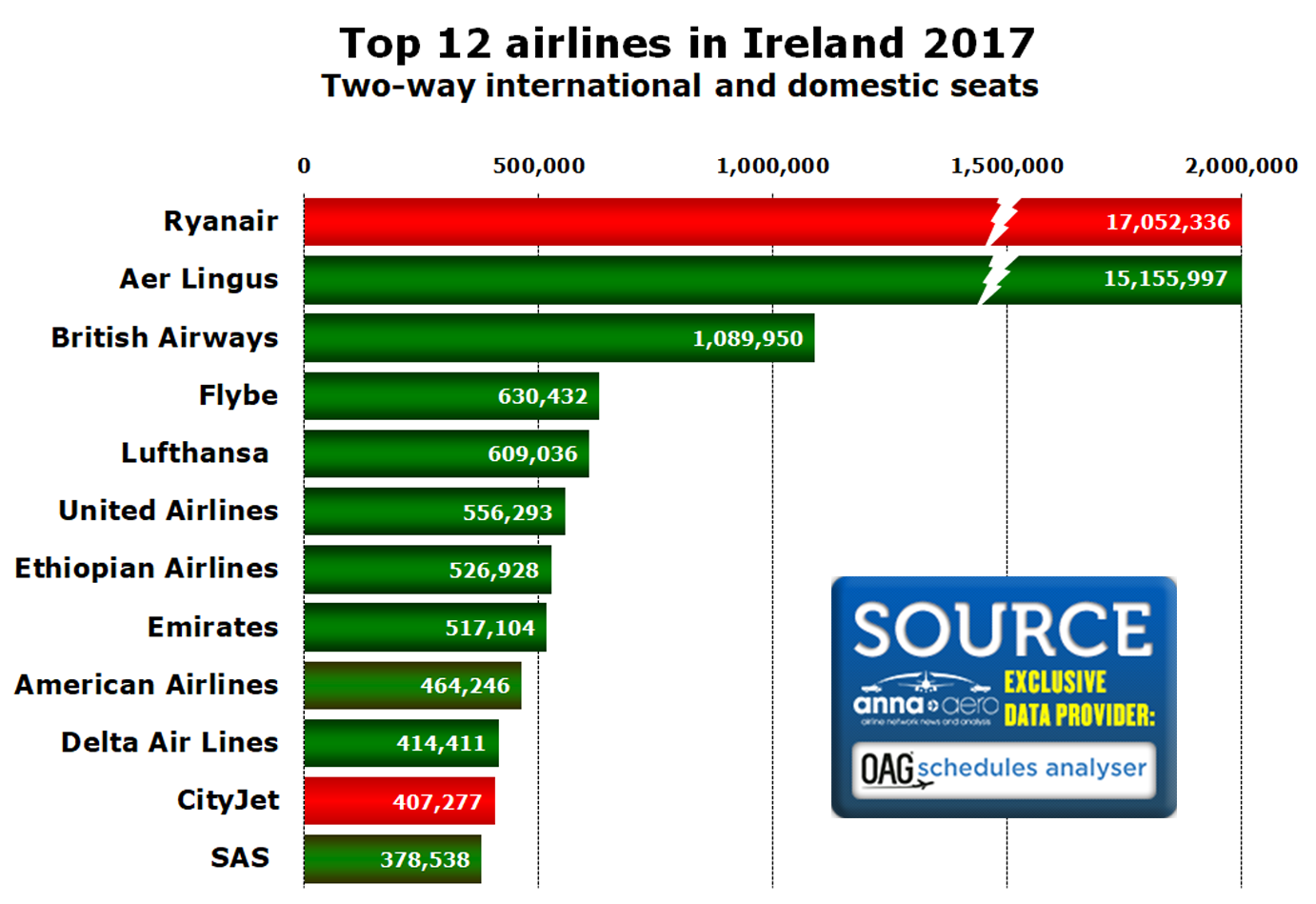 The US major airlines represent three of the top 12 carriers serving Ireland in 2017. Flybe and United Airlines introduced the largest year-on-year capacity increases on services to Ireland from 2016 to 2017 with 23.1% and 21.9% boosts in seat numbers respectively. SAS and Lufthansa also deployed significantly more seats in 2017. Outside of the top ranked airlines, KLM and Norwegian demonstrated exceptional year-on-year growth on Irish links. The only two top 12 airlines to cut capacity in 2017 were Irish based operators (highlighted in red), with CityJet reducing its seat count by 12.5% and Ryanair marginally reducing seats by 1.8%.

UK destinations account for 38.4% of all departing seats from Irish airports in 2017. The links from Dublin to London’s Heathrow and Gatwick Airports are the largest departing routes by capacity, while services from the Irish capital to Manchester and Birmingham are the fourth and fifth biggest. OAG schedules show that there were 55 separate airport pairs with scheduled services from Ireland to the UK in 2017. The Ireland-UK market remained fairly static from 2016 to 2017, with only a 0.3% reduction in seat numbers. 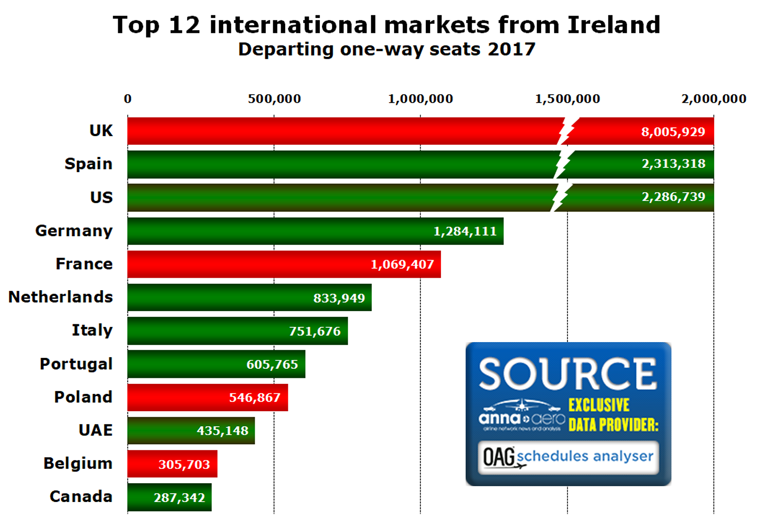 The top ranked destination markets that saw the strongest year-on-year capacity increases from Ireland from 2016 to 2017 were the US and Canada. The North American countries witnessed increases of 24.2% and 22.6% in arriving seats from Ireland respectively. The Netherlands and Portugal were the other top 12 destination markets to experience double-digit growth in 2017. Four top ranked country markets witnessed capacity cuts from Ireland, all of them European. Along with the UK, there were reduced seat numbers to France, Poland and Belgium (all highlighted in red), with the latter seeing cuts of 11.5% compared to 2016.

Combined departing capacity from Ireland to the US and Canada increased by 67% from 2008 to 2017. The North American market has seen double-digit growth from Ireland for five consecutive years, with capacity growing by 54.3% to the US and 379.4% to Canada during this period. Transatlantic services were boosted during 2017 following the introduction of low-cost long-haul services by Norwegian. The carrier opened a number of routes from Ireland to secondary airports in the US, with links to Providence from Cork, Dublin and Shannon, and to Stewart from Dublin and Shannon. 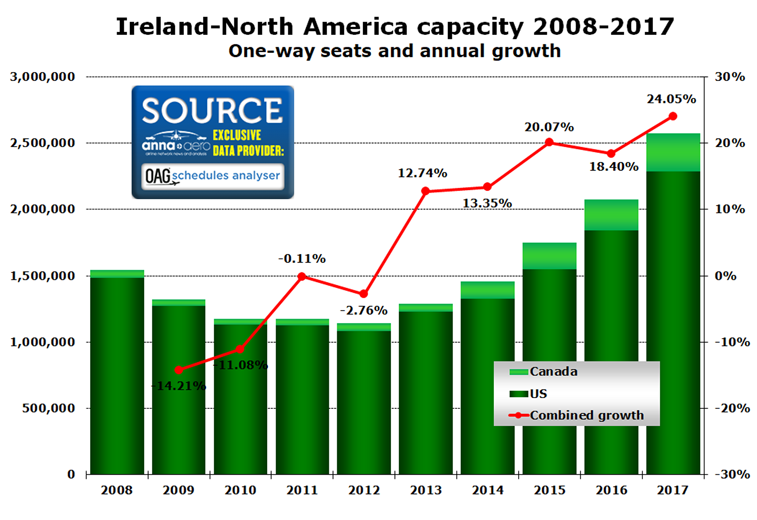 Although there is a clear trend in growth on transatlantic services from Ireland, it should be noted that several routes recorded in the OAG schedules may only be technical stops, with the listed seats between Ireland and the US not actually on sale. Ethiopian Airlines flies to Los Angeles via Dublin, with seats available to and from the US West Coast in each direction, but it also transits via the Irish capital to Washington Dulles and Toronto, and it seems these routes currently only stop in the Irish capital for re-fuelling. A similar scenario takes place for British Airways and Kuwait Airways flights from Shannon to New York JFK. These four sectors account for 11.8% of the published capacity from Ireland to North America in 2017. 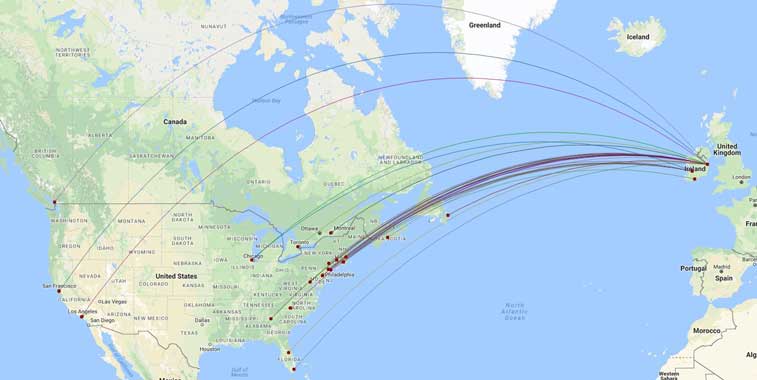 The transatlantic market has been one the strongest growing segments from Ireland in recent years. There are many links to the East Coasts of Canada and the US, but also several direct services to California and Vancouver. In 2017 Norwegian launched new low-cost, long-haul links between the secondary US airports of Stewart and Providence.