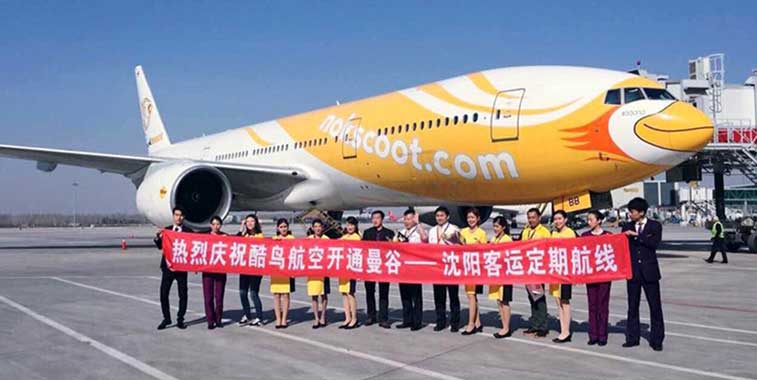 Around 21.66 million seats will be available on services between China and Thailand in 2017. This market has witnessed a large increase in capacity over the past 10 years and seats numbers have more than doubled since 2014. NokScoot is the 10th largest carrier between China and Thailand in 2017, and will provide seats on services to six Chinese destinations from Bangkok Don Mueang. In April 2016 NokScoot opened its fourth link to China when it commenced services to Shenyang using 777-200s.

China and Thailand have seen some of the strongest global growth in air service networks in recent years. This, combined with the relative proximity of the two Asia Pacific nations, means it is hardly surprising that the seat capacity available between them has increased in all but one of the past 10 years. anna.aero’s New Routes Database shows that airlines have started or will launch 42 new services between China and Thailand in 2017.

Capacity more than doubles since 2014

Around 21.66 million two-way seats will be available on services between China and Thailand in 2017, operated across nearly 115,000 flights. This represents a huge capacity increase of 536.9% since 2008. During the same period the average capacity per departing flight fell from 222 seats to 189, which suggests a possible shift away from operating intra-regional wide-body services, to more frequencies being flown on narrow-body types. 2009 is the only year out of the past 10, that witnessed a contraction in seats between China and Thailand. 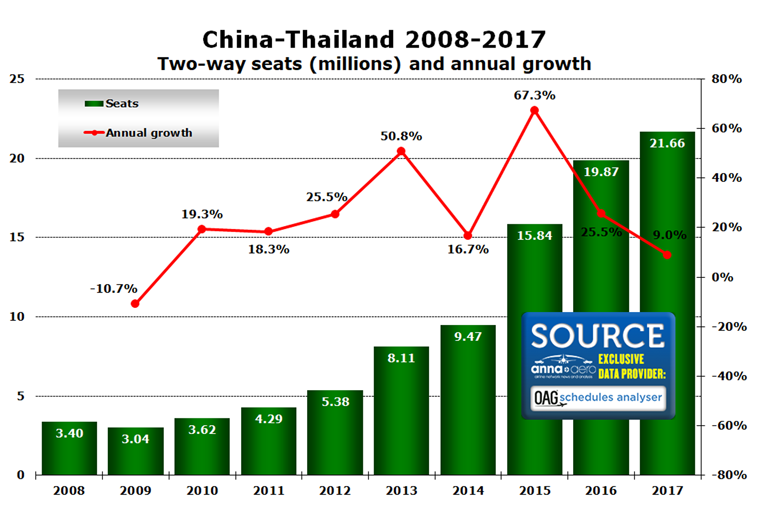 In 2008 there were 3.40 million seats available in the China-Thailand market, but this fell to 3.04 million in 2009 following a 10.7% cut in capacity, probably as a result of the global economic recession. Since then, there has been eight consecutive years of growth. Capacity more than trebled from 2009 to 2014 following five consecutive years of double-digit expansion. The single, largest year-on-year increase in seats came from 2014 to 2015, when capacity increased by 67.3%. Many airlines added capacity between China and Thailand during this period, with two of the largest operators, China Southern Airlines and China Eastern Airlines, each significantly upping their seats. From 2014 to 2017 total two-way capacity in the China-Thailand segment more than doubled, increasing by 128%.

Seven of the top 12 airports, based on departing capacity between China and Thailand in 2017, are Chinese, but the three largest are in Thailand. Bangkok Suvarnabhumi and Bangkok Don Mueang alone, account for one-third of all departing seats between the two countries. The two Bangkok airports are the largest in Thailand based on total departing capacity to all global destinations in 2017, while in China, Beijing, Shanghai Pudong and Guangzhou are the biggest facilities. For the purposes of this analysis, these five airports are considered to be the main hubs in this market. Between them they account for more than half of all departing seats between China and Thailand. All other airports are classified here as non-hubs. 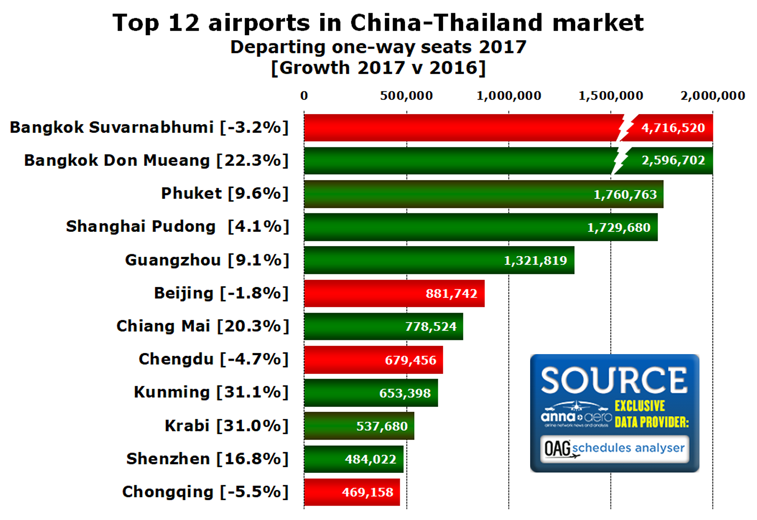 The five main hubs are all ranked among the top six airports for capacity between China and Thailand in 2017. Despite offering 49.8% more departing seats when all global destinations are taken into account, Beijing provides less capacity in the China-Thailand market than Guangzhou, China’s third largest airport. The top 12 airports that saw the strongest growth between China and Thailand from 2016 to 2017 are Kunming, Krabi and Don Mueang, with capacity increases of 31.1%, 31.0% and 22.3% respectively. Much of Don Mueang’s growth in this market is a result of expansion from Thai Lion Air and NewGen Airways. Four of the top 12 airports experienced a reduction in departing seats in the China-Thailand market (highlighted in red). The largest year-on-year cuts were experienced at Chongqing and Chengdu.

The five main hub airports, identified earlier, play a key role in the air service network between China and Thailand. In 2017 they will provide 11.92 million departing seats in this market, up from 2.90 million in 2008. However, the percentage of overall capacity departing from the five hubs has been declining over the past 10 years. In 2008 the five hub airports accounted for 85% of all departing seats between China and Thailand. Their market share has decreased year-on-year since 2010 and has dropped by 37 percentage points since that year. 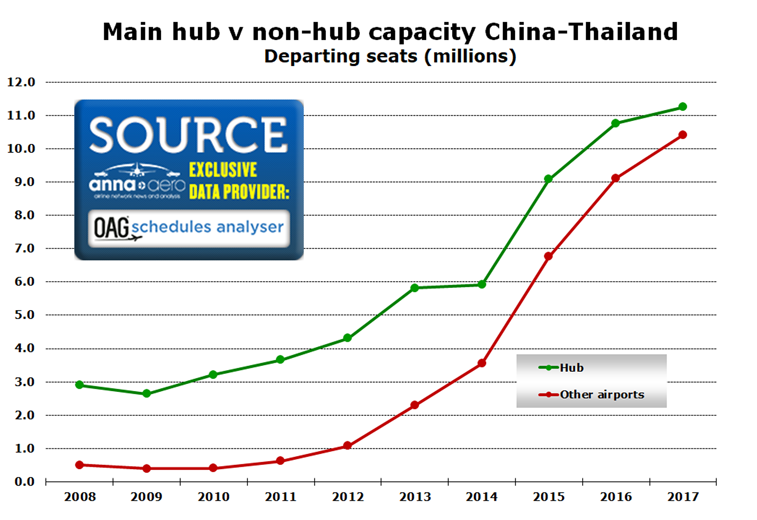 The decline in market share of the main hubs over the past 10 years, despite a large increase in the seats available from these facilities, indicates that the rate of growth at the non-hub airports has been even greater. In 2008 the non-hub airports provided 501,061 departing seats between China and Thailand, which was just 15% of the total market. Departing capacity from the non-hub facilities has experienced seven consecutive years of double-digit growth in this market, including a 114% increase from 2012 to 2013. In 2017 the non-hub airports account for 48% of all departing seats between China and Thailand, suggesting that route planners are adding more point-to-point connections between the two countries.

Thai AirAsia has provided the most capacity between China and Thailand for the past two years and serves 18 airport pairs in the market in 2017. Despite this, the Thai-based AirAsia subsidiary has dropped three routes that were served last year and reduced capacity on others resulting in an overall cut in year-on-year seat numbers of 10.6%. The strongest percentage growth in seats in this market from 2016 to 2017 was delivered by NewGen Airways and Thai Lion Air, so in football parlance they top the form table. 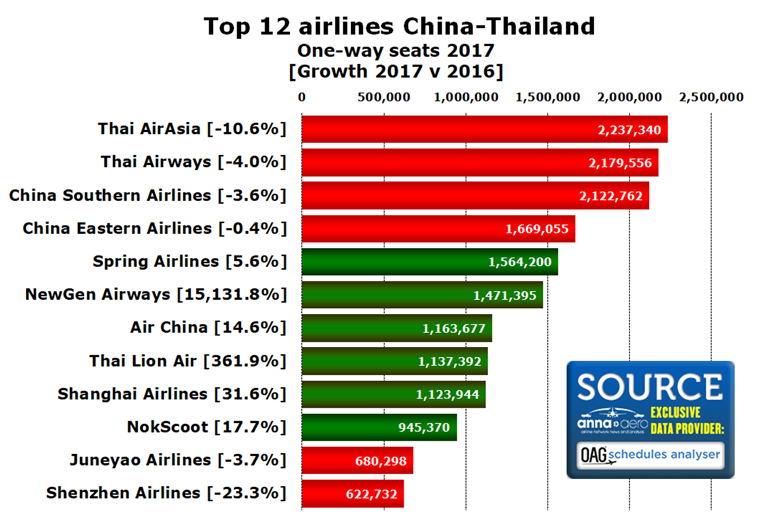 According to ch-aviation, NewGen Airways is a Thai-based carrier that was established in 2013 and currently operates a fleet of four 737-400s and eight 737-800s. OAG schedules show the airline will offer scheduled seats on up to 39 airport pairs between Thailand and China in 2017, although the low frequency of some services indicates they could be irregular, seasonal operations. The extent of the increase in NewGen Airways’ scheduled capacity from 2016 to 2017 indicates that some of its services may have been transferred from charter to scheduled operations. Six of the top 12 carriers between China and Thailand cut capacity in the market from 2016 to 2017 (highlighted in red), with the largest percentage reduction coming from Shenzen Airlines. 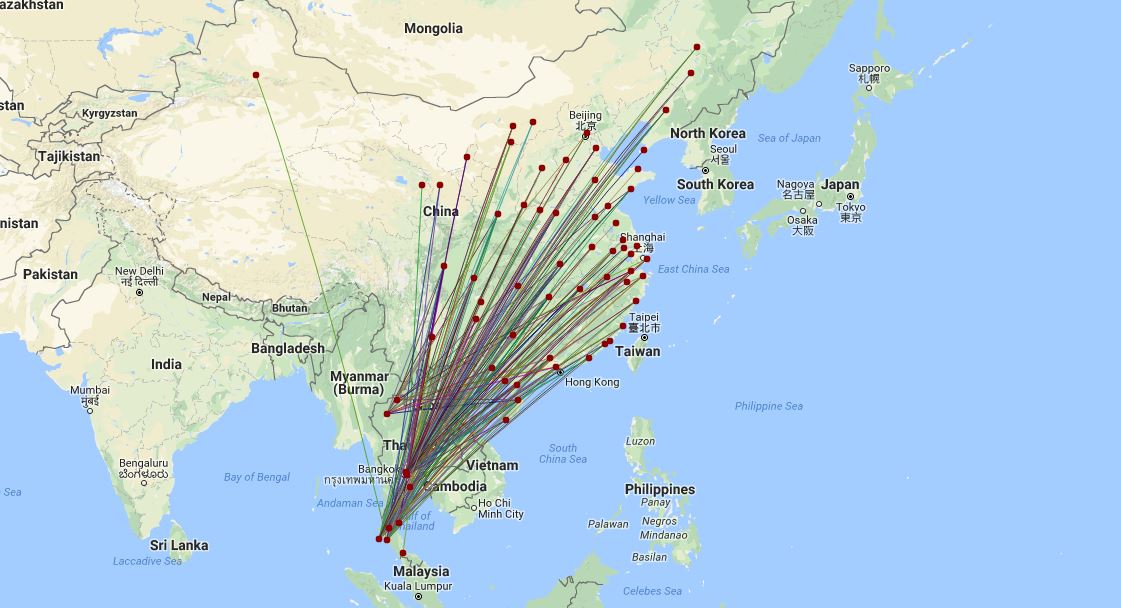 According to anna.aero’s New Route Database, airlines have or will commence up to 42 new services between Asia Pacific near neighbours China and Thailand over the course of 2017. The largest airport pair between the two countries, based on available seats, is the link between Shanghai Pudong and Bangkok Suvarnabhumi. This route will support 843,000 one-way seats in 2017.