Brussels-Sao Paulo is “Skyscanner Unserved Route of the Week” with over 220,000 searches; a tempter for TAM Airlines?? 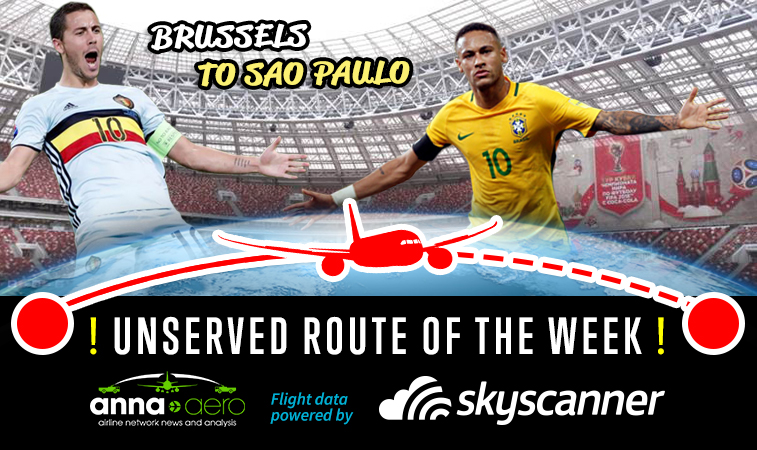 Could one of these two players – Belgium’s Eden Hazard or Brazil’s Neymar Jr. – become the hero of the 2018 FIFA World Cup Final which will be at 16:00 on Sunday 15 July next year at Moscow’s Luzhniki Stadium? One thing is for certain, a non-stop route between Brussels and Sao Paulo will definitely help the South American country’s fans get to Europe (before continuing onto Russia), along with the 220,000 travellers that also searched for flights between the two cities.

With over 220,000 searches in the last 12 months, a potential city pair from Brussels to Sao Paulo has been identified as this week’s “Skyscanner-anna.aero Unserved Route of Week” – a powerful analysis based on aspirational data captured from the Skyscanner.net flight comparison site used by +60 million unique visitors per month. “Brazil is currently the largest unserved market [on a country basis] from Brussels,” says Geert Van Dessel, Senior Manager Aviation Development, Brussels Airport. “Sao Paulo [obviously] is the largest O&D in Brazil from Brussels.” 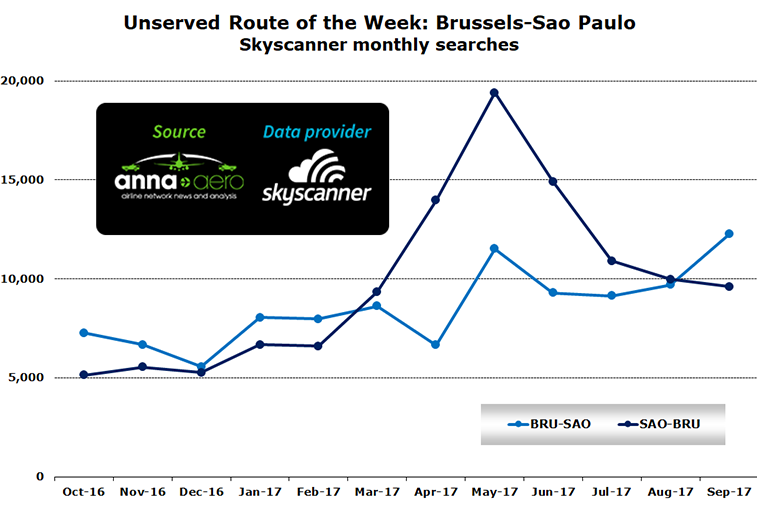 Skyscanner demand on this week’s unserved route shows a marginal preference towards the Sao Paulo end of the city pair, with a 53/47 split, so on this basis we looked at potential carriers at the Brazilian origin first. Operations from Sao Paulo’s international airports at Guarulhos and Viracopos are the only ones to have been considered for this analysis, as the city’s Congonhas Airport is currently 100% domestic. According to OAG schedules for the week commencing 4 December, the largest carrier at Guarulhos is TAM Airlines (32% share of weekly seats). The airline’s 45-destination non-stop route network from the Brazilian city presently consists of five European destinations – namely to Barcelona, Frankfurt, London Heathrow, Milan Malpensa and Paris CDG (all served daily). The oneworld carrier clearly has European expansion on its radar having announced plans in October to start a three times weekly Rome Fiumicino service next March according to anna.aero’s New Route Database, so it would seem that a potential route to the Belgian capital would not entirely be out of the question for LATAM.

Guarulhos’ second biggest carrier GOL (26% share of weekly capacity) offers nearly 125,000 one-way weekly seats across a 41-destination non-stop network. However unlike its domestic competitor TAM, none of its current 117-aircraft-strong fleet are long-haul capable, as they are all 737s (26 -700s and 91 -800s), according to ch-aviation’s fleet database. The airport’s third and fourth largest capacity providers – Avianca Brasil (14%) and Azul Airlines (4.7%) – do both have A330-200s, however only the latter uses them on routes outside of the US market, with a six times weekly service from Viracopos – where it is the #1 carrier in terms of weekly seats, with a 95% share – to Lisbon. On this basis, it is perhaps Azul, from its main base in Sao Paulo at Viracopos, which should be considering Brussels as its second route into Europe for S18. “There is strong growth in the number of Brazilian tourists visiting Belgium. We are planning further investment in this market together with our tourism boards,” informs Van Dessel.

Contemplating the Brussels end of the route, the airport’s #1 capacity provider of its existing 58 serving airlines is the flag carrier Brussels Airlines, which offers 39% of weekly seats. The airline, which provides an increasingly broad geographical spread to its network, including numerous African, Asian and North American routes, is yet to serve any destinations in the Caribbean, Central America or indeed Upper or Lower South America. However, there can be few opportunities in the region with as much potential as a service to Sao Paulo, so now armed with this Skyscanner data, the sector could well represent Brussels Airlines’ first foray into South America from its growing Brussels hub. “Demand on the route has a high business component, with many corporate links between Belgium and Brazil, such as beer brewing giant AB InBev [which is a merger of a Belgian and Brazilian brewer]. Think Stella, Leffe, Corona, Brahma, Beck’s, Budweiser, etc.” suggests Van Dessel.

When looking at the previous year of search data, the busiest month for potential traffic flows (for both directions on the route combined) is May 2017, with nearly 31,000 searches, over 20,000 higher than the lowest monthly figure, which was recorded in December 2016 (11,000 searches). The seasonality profile of this search data is significantly more extreme than last week’s Unserved Route of the Week (Melbourne-Phnom Penh), with the low-month traffic representing just 35% of the highest month. According to OAG Traffic Analyser, because there is no direct service, the top three connecting options chosen by those passengers who did book travel between Brussels and Sao Paulo in the last 12 months (year ending September 2017) indicates that the majority of connecting travellers used Lisbon (22%), Frankfurt (21%) and London Heathrow (13%). In total 40 different airports were used by travellers as a transfer point between the two cities since last October. “There is a large community of Brazilians in Belgium [in Brussels, specifically]. Recent data from the Brazilian Ministry of Foreign Affairs puts the number at 48,000,” explains Van Dessel.

Indeed, an O&D that is not served by a non-stop flight will typically display a low purchase rate and low traffic. In this instance Skyscanner’s Travel Insight indicates a monthly average of 5.6% for the Brussels to Sao Paulo route (see graph below). Therefore, if there was a Brussels to Sao Paulo route, and if bookings performed in line with the “Skyscanner market average” for direct services at both airports (6.0%), the airline operating this route could immediately expect an improved purchase rate of 7.1%, without any increased marketing spend. However, with over 220,000 annual searches in the last year, a four or five times weekly service should be immediately viable for the airline choosing to start this potential city pair. “Brussels is [one of] the largest unserved European routes from Sao Paulo. We have been working together with our colleagues from Guarulhos Airport to develop this route,” concludes Van Dessel. 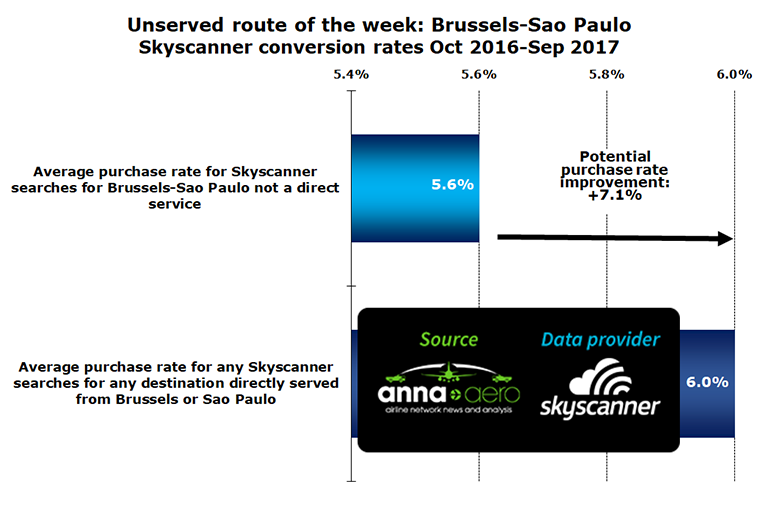