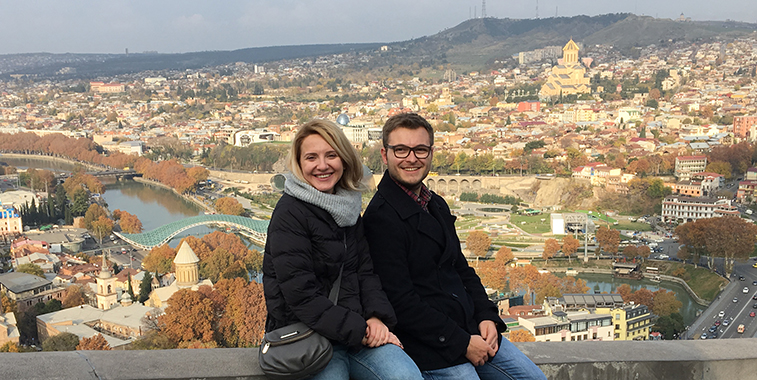 Tbilisi is the destination for CONNECT 2018, taking place between 20-22 February 2018 at The Biltmore Hotel. Dea Matchavariani, Business Development Manager, United Airports of Georgia and Jonathan Ford, Assistant Editor of anna.aero, enjoy the sights of the city from the Kartlis Deda view point next to Narikala Fortress. Among the key tourist sites of the city in shot include The Bridge Of Peace over the Kura River, the Presidential Palace and St. Trinity Cathedral.

It is no wonder that so many people are packing their bags to discover the sights and sounds of Georgia. The capital of Tbilisi amazed anna.aero with its charming history which dates back to the fifth century. It is striking how the city encompasses ancient architecture, beautiful scenery and cultural centres with all the amenities of a modern lifestyle – leisure areas, restaurants, cafes, shopping and great nightlife (an environment which anna.aero can certainly confirm to be true). This makes it not only a great place to visit, but also a fantastic location to do business – with Georgia ranking 16th globally in 2016 by World Bank on its ‘Doing Business’ Index, another factor as to why the city is the perfect place host to CONNECT 2018.

Now’s the time to enter the Georgia market

Since the lifting of visa travel between EU countries and Georgia, the number of visitors from the European block has bloomed during the first nine months of 2017. Between 1 January and 30 September this year, a total of 263,600 EU citizens visited Georgia, up by nearly 25% when compared to the same period of 2016. 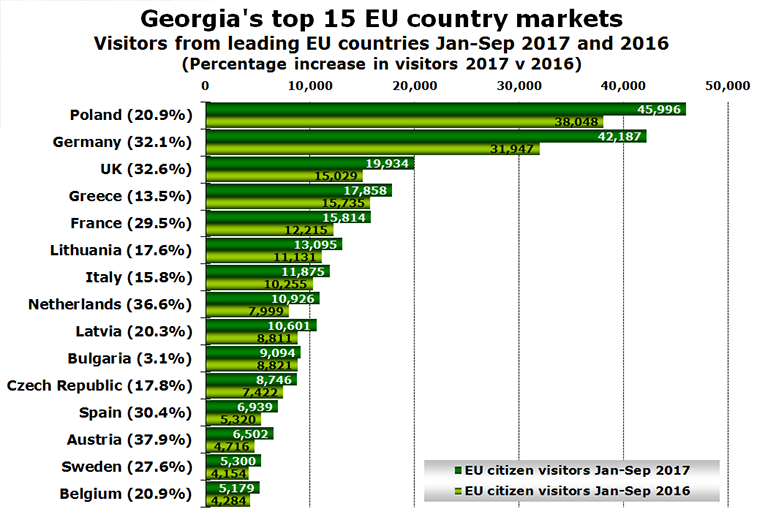 Among the nations to show increased visitation to Georgia so far this year include Germany, UK, Netherlands, Spain and Austria, all of which have seen their visitor numbers to the nation increase by over 30% for the first nine months of 2017.

It is not just EU citizens that have seen the potential of Georgia, but Lonely Planet has named the country as one of the top 10 countries to visit in 2018. The travel experts say of the country: “At this crossroads of the South Caucasus, history is not a thing of the past but informs every complex chess move Georgia makes in the present. Forward-thinking but proud of tradition, this is a country of ancient recipes cooked up in tucked-away taverns where toastmasters raise glasses of spirits to honour heroes old and new.”

Georgia is easily accessible, with the nation upholding a visa-free regime with 97 nations and Resident Permit Holders of 50 states, including CGG and European nations. An e-visa option is also available, and holders of a valid visa for the US, EU member states, Japan, South Korea and the UAE may enter Georgia without the requirement of a visa.

No matter what your airport’s or airline’s budget maybe, Tbilisi has the package to suit everybody’s pockets in enabling you to attend next year’s event. So what are you waiting for, if you have not already done so, sign-up today like many airlines and airports which have already done so.

What to do when you’re in Tbilisi 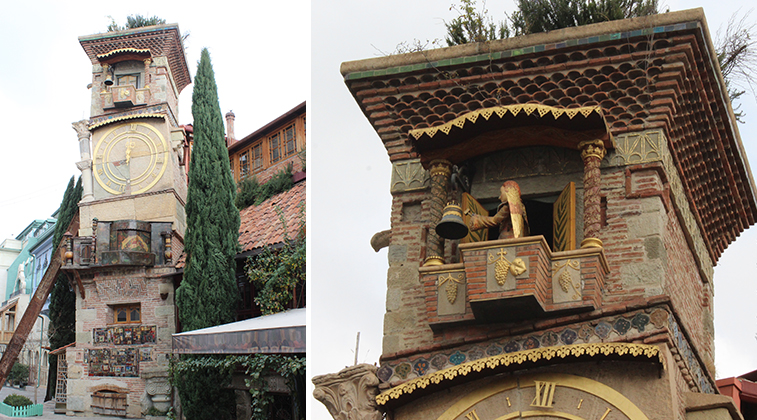 One of the must-dos, and probably the most distinctive place when visiting Tbilisi, is wandering through its old town, taking in its old-style balconies, ancient churches, winding narrow streets, and charming shops. Here one will notice a number of eccentric sites ranging from churches to mosques and synagogues. Among the sights of the old town is the leaning tower of Tbilisi, one of the city’s most unusual buildings. Tucked into a side street of the old town, it truly is a bizarre structure, with a tower on the perpetual brink of falling down, and only a steel beam holding it in place. A huge clock sits in the middle of the dishevelled tower, with a leaning column on its side. It is a modern tower, attached to the puppet theatre of renowned puppeteer Rezo Gabriadze, who is the brainchild behind the structure, as well as the building to its side, which houses the theatre. Everyday at midday, the clock is chimed by an angel, while a puppet show then appears at the bottom just below the clock face. The sculpture of a man holding a horn in Tbilisi modeled on an ancient Colchian statuette affectionately monikered as “tamada”. The tamada, or toastmaster, is a very important and honoured person at a supra, a traditional Georgian dinner. He creates and sets the whole atmosphere of the supra by creating and proposing toasts which are designed to be little poems by their structure and pieces of wisdom in meaning. A sense of humour and a good knowledge of traditional toasts are just some of the characteristics of a good tamada. The supra accompanies all the key events of Georgian life and stands at the heart of Georgia’s famed hospitality. A tamada bridges the gap between the past, present and future. Be prepared however….and remember that the best way to respond to a toast is the word ‘gaumarjos’ which means ‘to our victory’. Proposing toasts has a certain traditional order: first you often drink to peace; and then to the reason for the gathering. One will find this tamada in the centre of Tbilisi’s old town, and if you have a wish that you’d like to come true, then kissing the tamada’s cheek will mean that the wish becomes reality. Tbilisi has plenty of places to unwind to after a busy day of meetings and evening receptions, with David Agmashenebeli Avenue and urban hot-spot Fabrika, a massive venue housed in an old soviet-era sewing factory, among those being visited by anna.aero. Ford loved the ambience of Fabrika, with the urban atmosphere offering an interesting contrast of old structures and modern action. The interior designers worked to keep the original character and the content of the building leaving most of the place untouched. Around the courtyard of Fabrika you will find different urban cafes and bars, art studios, contemporary art shops and a creative educational studio focusing on photography, modern music, paint and graffiti. It is therefore the perfect setting after a hard day’s work.

The home of wine

Nothing is more informative about the spirit and culture of a country than its native food and drink, and Georgia’s is among the best in the world when it comes to one liquid – wine. anna.aero was amazed to learn that Georgia has the oldest continuous unbroken tradition of wine making in the world, stretching back over 8,000 years, and today there are more than 500 indigenous grape varieties still cultivated in the country. Winery Khareba is established upon ancient traditions. The company works over maintenance of the unique vine culture and wine making both using ancient methods and modern technologies, allowing for the company to produce high-quality wines. According to the modern market and technology developments, Winery Khareba reorganised and considerably improved technical equipment of the factory. The company owns the plot of land where the high-quality wines are produced. Wines are made in two regions of the country: Kakheti in the east; and Imereti in West Georgia. Sampling the fine wines of Georgia, some of the best in the world, at the Khareba Winery are Tornike Zirakishvili, Head of the Bureau, Convention and Exhibition, Bureau of Georgia, and Dea Matchavariani, Business Development Manager, United Airports of Georgia. The history of wine making in the Kakheti region can be traced back to the sixth millennium BC. Wine has been produced using the unique style of Qvevri – clay pots submerged into the ground which are used to ferment and create delicious unfiltered, organic wines. Grapes are placed into the Qvevri and placed in the ground, sealed and left for several months to reach a natural and delicious maturity. 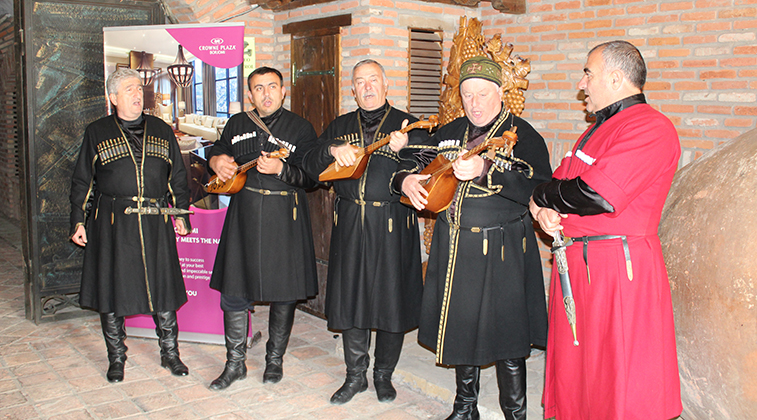 Georgia has rich and still vibrant traditional music, which is primarily known as arguably the earliest polyphonic tradition of the Christian world. Situated on the border of Europe and Asia, Georgia is also the home of a variety of urban singing styles with a mixture of native polyphony, Middle Eastern monophony and late European harmonic languages. Along with wine, Georgia is also home to traditional cooking methods, with anna.aero’s Jonathan Ford and United Airports of Georgia’s Dea Matchavariani having a go at making Lobiani – a type of bean bread which is cooked in a 300-degree oven. The pair also attempted making Churchkhela, a traditional sausage-shaped candy originating from the Caucasus region. It is a very popular food, combining two of Georgia’s favorites – grapes and nuts. Another interesting town close to Tbilisi which was visited by anna.aero was Sighnaghi. It is a town in Georgia’s easternmost region of Kakheti and the administrative centre of the Sighnaghi district. It is one of the country’s smallest towns with a population of around 3,000. The town was developed in the 18th century by King Erekle II as a refuge for the population against Lezgin and Persian attack. The name Sighnaghi comes from a Turkish word for Shelter – ‘signak’. Sighnaghi has wonderful views over the surrounding hills, the Alazani Valley and the Caucasus beyond. Most of Erekle II’s four-kilometre defensive wall still stands, with 23 towers and each one of its six gates named after a local village the town is surrounded by. Part of the wall runs along Chavchavadze on the hilltop of the northwest side of Sighnaghi, where you can enter the tiny Stepan Tsminda Church inside a tower. The 19th century Tsminda Gorgi Church abuts another stretch of wall, lower down on the northeast side of town. A little further down you can climb up inside one tower and walk on top of the walls down to the gate over the Tsnori road.