Wizz Air’s seasonality report – could do better; traffic to whizz past 28m passengers in 2017 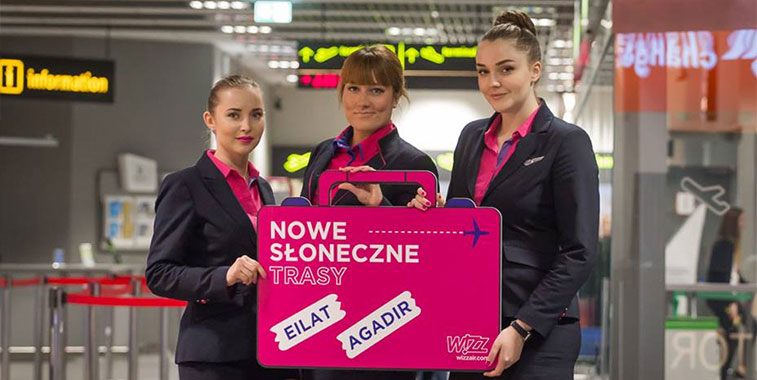 Wizz Air recently launched flights from Katowice to Agadir and Eilat Ovda, with the ULCC now offering 32 destinations from the Polish city and its seventh biggest base this winter. The carrier only serves a handful of routes in countries outside of Europe, with the Middle East (Israel and UAE), Africa (Morocco) and Central Asia (Kazakhstan) being the current exceptions.

Wizz Air is the largest ULCC in Central and Eastern Europe, operating a fleet of 87 A320s and A321s, and offers more than 550 routes from 27 bases, connecting 145 destinations across 43 countries, according to the carrier’s latest monthly results press release (we could only find 42 countries – see below). In the last 12 months (rolling year) the airline has delivered 30.5 million seats to market, up 21% versus the same period last year, when it offered a total capacity of 25.5 million on board its fleet. Referring to the same time frame, it handled 27.9 million passengers up to and including November 2017, a staggering 24% rise over the 22.4 million it carried in the preceding 12 months. With passenger growth outstripping its increased seat provision, load factors have responded favourably, up 2.4% from 89.0% to 91.4%.

We have often used this SVID calculator graph for airports, yet it works just as well for an airline too. Fortunately for Wizz Air, its result are good, but it could still do better. While the ULCC made progress between 2015 and 2016 in terms of flattening its seasonality – falling from a SVID score of 2.93 to 2.46 – the result has worsened this year to 2.78. The airline’s peakiness is perhaps explained when looking at the net passenger growth between individual months in 2015 and 2017. The lowest net increase can be found when comparing February in both years – of just over 560,000 extra passengers – with October delivering the biggest net improvement of nearly 940,000. The airline has added over nine million passengers to its throughput since 2015. NB: In order to complete 2017 passenger figures, our data elves have applied the rolling year growth of 24% to last December’s result (figure in pink cell).

According to OAG schedule data for W17/18, the airline presently serves 41 country markets, as it did in S17. However, OAG treats Kosovo as still being part of Serbia, whereas Wizz Air treats them as separate nations, increasing the count to 42. We can see the addition of Estonia next summer, when Wizz Air starts services from Kiev Zhulyany (19 April) and London Luton (17 September) to Tallinn, taking us to the 43 countries mentioned in the airline’s latest press release. The carrier only serves a handful of routes in countries outside of Europe, with the Middle East (Israel and UAE), Africa (Morocco) and Central Asia (Kazakhstan) being the current exceptions.

Europe’s six biggest air passenger markets – France, Italy, Germany, UK, Spain and Turkey (not in order of size) – are known at anna.aero by the acronym FIGUST. However only four of them are found in Wizz Air’s top 12 country markets, with France in a lowly 18th spot, and Turkey is not served at all by the ULCC. 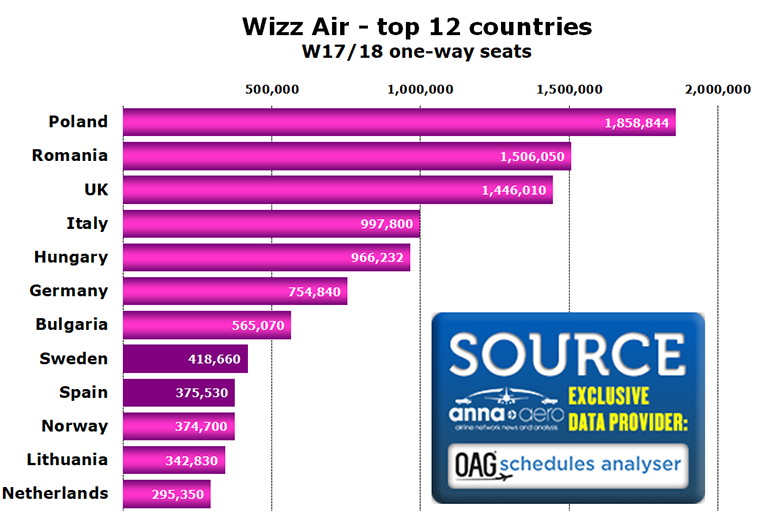 When looking at the top 12 country markets in S17 and W17/18, the 12 nations do not vary. In fact, 10 countries maintain their exact positions in the chart regardless of season, with only Sweden and Spain (highlighted in purple) swapping positions (Spain is eighth in S17). While typically the winter season is shorter than the summer (22 weeks versus 30), resulting in an obvious disparity between S17 and W17/18, low season capacity trimming is also evident at the airline. For example, the capacity offered to Spain by Wizz Air in S17 is 92% larger than that flown by the carrier in W17/18. At the opposite end of the spectrum, Lithuania has the least variance in seats between the seasons, with S17 just 34% larger than W17/18 capacity.

Unsurprisingly, as Wizz Air’s biggest base, with over 54,000 weekly seats (w/c 5 December), Luton dominates the carrier’s top 12 routes in terms of weekly frequency, with nine city pairs. The three routes which do not have the London airport at one end of the sector are highlighted in purple. Further fortification of Wizz Air’s presence at Luton will continue in S18, following the acquisition of additional slots/stands from Monarch Airlines at the airport, taking the total number of based aircraft to seven next summer. The airline’s second largest operation (42,000 weekly seats) in Budapest features three times, including the #1 route. 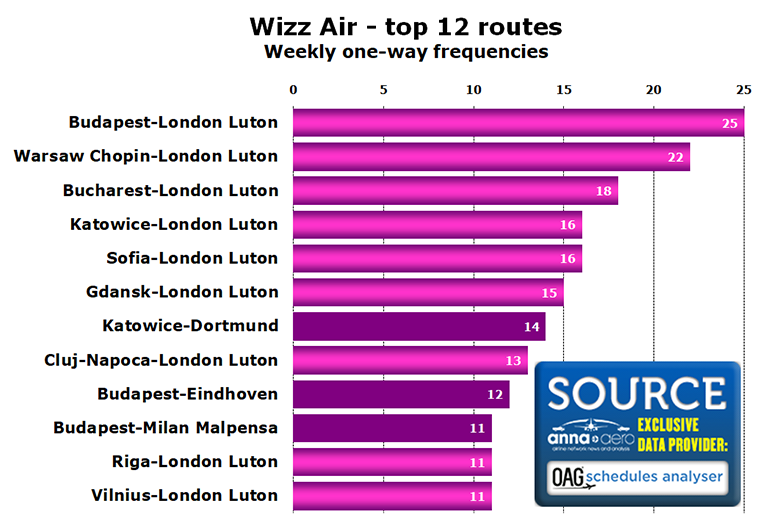 Comparing this winter’s schedule for Wizz Air (w/c 5 December) versus a sample week from S17 (w/c 31 July), there have been some frequency tweaks to the airline’s top 12 routes between the two seasons. The most significant alteration has occurred on the #1 airport pair of Budapest-Luton with its S17 weekly frequency of 32 being reduced to 25 in W17/18. Only the Katowice to Dortmund route has gone unchanged between S17 and W17/18 with its double-daily frequency maintained. Vilnius-Luton did not appear in the S17 sample week, as the Lithuanian airport carried out reconstruction of its runway from 14 July to 18 August.

Consulting anna.aero’s New Route Database, the ULCC’s dynamic growth is seemingly insatiable, with around 70 route launches planned in the remainder of W17/18 and S18, including the five new sectors from Luton – Larnaca (daily), Tirana (three), Bratislava (daily), Tallinn (four) and Lviv (three). It is interesting to note the average weekly frequency (4.8) of these five new routes from Luton against the more typical twice-weekly introductory schedule used by the airline, highlighting the significant appeal of the UK capital. 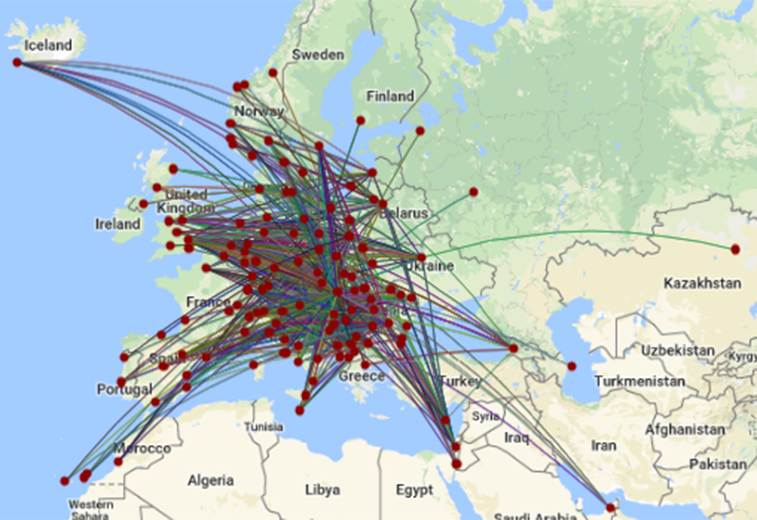