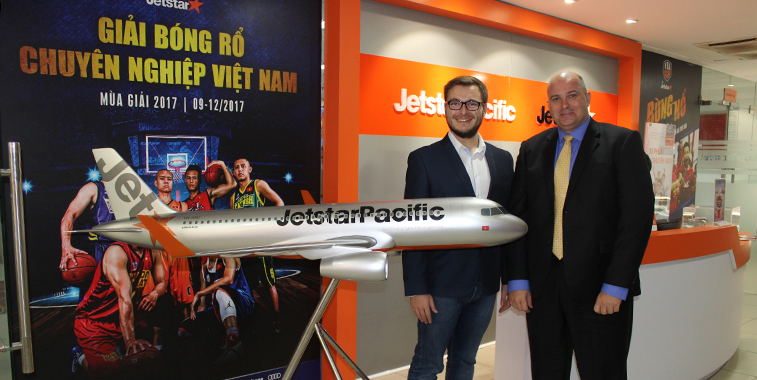 anna.aero’s Assistant Editor, Jonathan Ford, recently travelled to Ho Chi Minh City in Vietnam to meet with Jetstar Pacific Airlines’ COO, Leslie Stephens, to talk about the airline’s performance in recent years and how the 70% Vietnam Airlines-owned carrier is starting to forge a path in the Vietnamese market.

Jetstar Pacific Airlines is an LCC based in Vietnam, currently operating a fleet of 17 A320s and carrying around five million passengers per annum according to its CEO Nguyen Quoc Phuong. Passenger numbers are expected to increase by around 14-15% in 2017. According to the General Statistics Office of Vietnam (GSOV), the number of passengers carried by air between January and November reached 41.6 million, an increase of just under 14% when compared to first 11 months of 2016, matching the predicted increase that is expected to be seen at Jetstar Pacific. To find out more about the carrier, anna.aero’s Assistant Editor Jonathan Ford travelled to Ho Chi Minh City to meet the airline’s COO Leslie Stephens.

This year Jetstar Pacific is scheduled to operate 6.68 million seats across its network according to OAG schedules, an increase of 3.5% when compared to 2016. Before this year however, the airline had encountered sharp growth. “Along with our increases, heavy capacity growth from other carriers has hurt yields,” comments Stephens. “The domestic O&D market is especially challenging.” He adds that in 2017 the airline expects to carry over five million passengers. “Of those five million, around 15% of this will connect onto services operated by other Jetstar Group carriers. Being part of the Jetstar Group, we have connections from the likes of Jetstar Japan and Jetstar Asia, and that helps bring traffic in to feed our network and vice versa.” The airline told anna.aero that it is currently seeing an average load factor across its network of 84%. 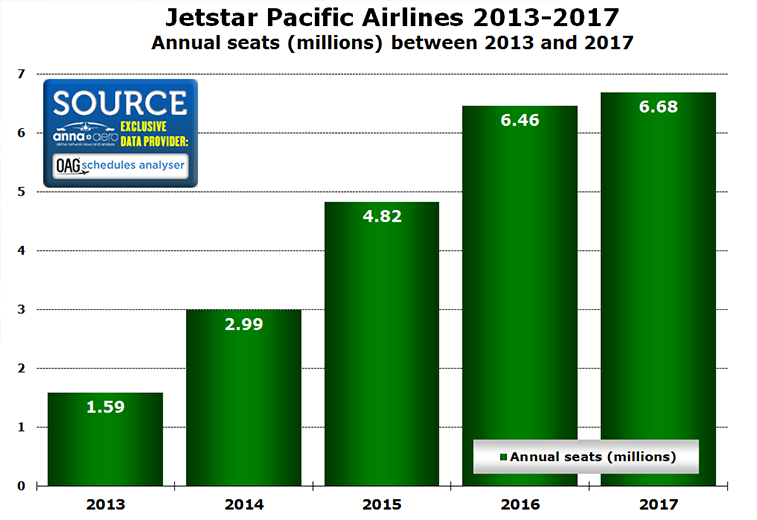 According to Stephens, Jetstar Pacific is taking a break from its impressive growth in order to maintain its expanded operation. “We are taking a breather for a while before going into further growth. The problem at the moment is that the Vietnamese market is currently overstimulated, so I don’t think you’ll see a lot of additional market stimulation in the short-term.”

The international market is increasing rapidly from Vietnam, with statistics from GSOV indicating that in the first 11 months of this year, international visitors to Vietnam increased by 28% to just under 11.65 million, with 9.88 million of those travelling by air, up 31% on the same period of 2016. The results means that  international air services are the fastest growing mode of transport in Vietnam for non-domestic travel, with land border crossings increasing by 16%, while sea travel saw passenger numbers decline by 7.7%. Of Jetstar Pacific’s top 12 routes, only one is an international connection, with Bangkok Suvarnabhumi (highlighted in light green) currently the airline’s 11th largest airport operation with regards to departing annual seat capacity. 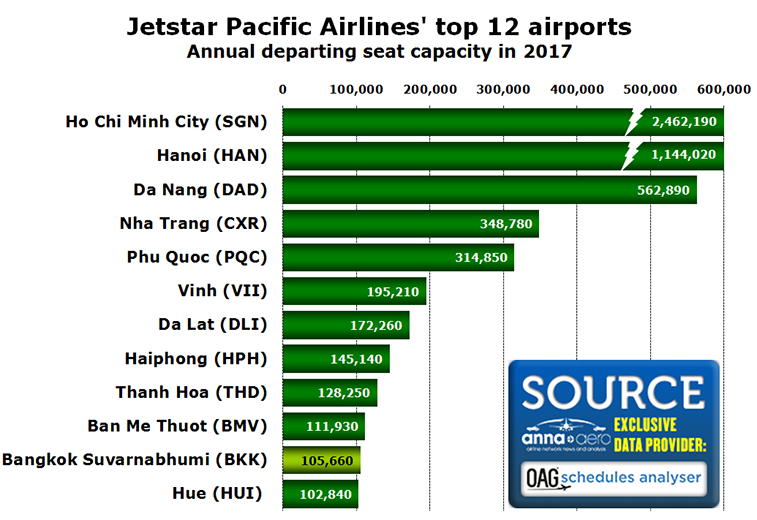 Jetstar Pacific began its first scheduled international service on 28 March 2014 in the form of a twice-daily flights from Da Nang and a daily rotation from Hanoi to Macau. When excluding charter operations, which according to Stephens accounts for 13% of the airlines flying, and are mainly flown to China, scheduled international seat capacity now accounts for 21% of the airline’s annual seat offering, up from 16% in 2016 according to OAG Schedules Analyser data. Factors which will have helped the carrier post this result include its recent launch to Chiang Mai from Dong Hoi, plus its new routes to Osaka Kansai. “We are very happy with how these routes are performing so far,” informs Stephens. “What we are also seeing is a sizeable amount of connection traffic onto Jetstar Japan services in Osaka, and many inbound passengers connecting onto our services from Hanoi and Da Nang.” Stephens also went on to comment on how connecting traffic from Australia had increased since Jetstar Airways returned to the Vietnamese market with 787 services from Melbourne and Sydney.

One issue that Jetstar Pacific faces, along with many airlines, is seasonality. “With Vietnam mainly being a tourism destination, one factor that we struggle with, particularly in the international market, is seasonality,” informs Stephens. “In order to compensate for this, we sometimes wet-lease aircraft out, for instance we have some aircraft at the moment operating in the Middle East.”

When it comes to enhancing its network and evaluating new route possibilities, a committee comprised of Jetstar Pacific and representative of shareholders hold regular meetings to discuss possibilities. “It’s all about getting the right equipment and product on each market to ensure we make the most of the potential opportunity,” informs Stephens. “We sit regularly with Vietnam Airlines, our main shareholder, and assess route network developments to see which carrier offers the best operation for the service.” One issue that Stephens commented on which impacts the airline’s expansion of operations from Ho Chi Minh City is that it is near on impossible to obtain slots in the ‘golden hours’. “Between 7am and 7pm there are no slots available making it hard to expand services. Not only that, but apron space is tight so we would physically struggle to get more aircraft on the ground presently.” The airline has received 10 aircraft from Airbus this year, but most of these have replaced old metal. Nonetheless, with the aircraft replacements and limitations on parking space at its main hub of Ho Chi Minh City, the carrier is optimistic of adding more units to its fleet in the future. “So far we have seen around a 9% fuel saving with the newer aircraft. We are mulling the idea of adding more aircraft, but a decision on this matter will not be looked at until the end of 2018.” 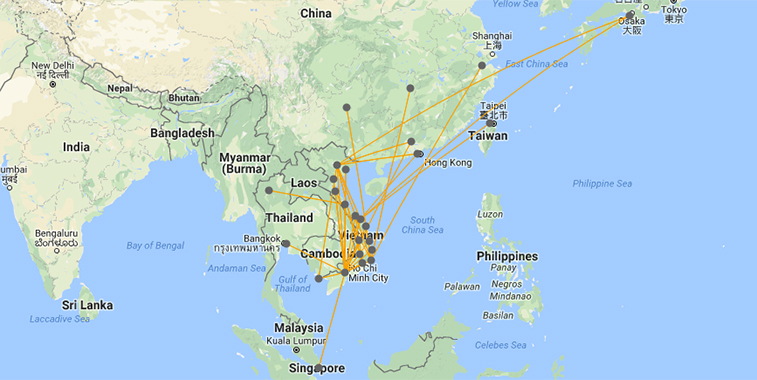 Jetstar Pacific Airlines has a robust domestic network in Vietnam with a wider range of international markets now making an appearance on its route map, with Chiang Mai and Osaka Kansai being among the new additions this year. Scheduled international seat capacity now accounts for 21% of the airline’s annual seat offering, up from 16% in 2016 according to OAG Schedules Analyser data. The airline also offer multiple international charter services, predominantly to China.