Adelaide, Melbourne and Vancouver airports begin the holiday celebrations with their Route and Cake of the Week awards 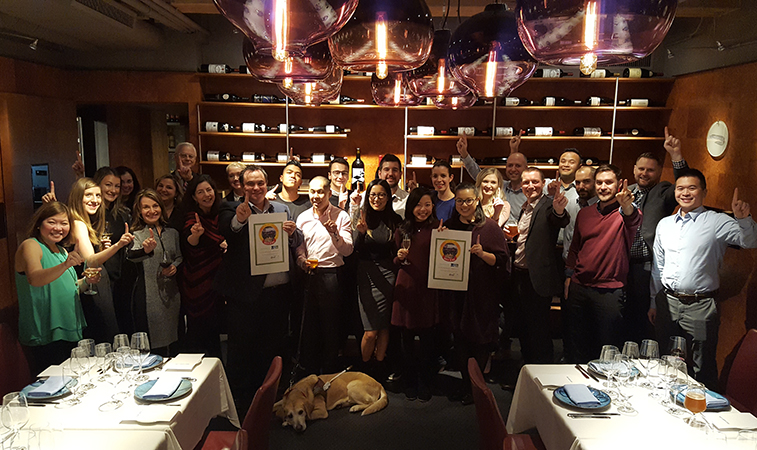 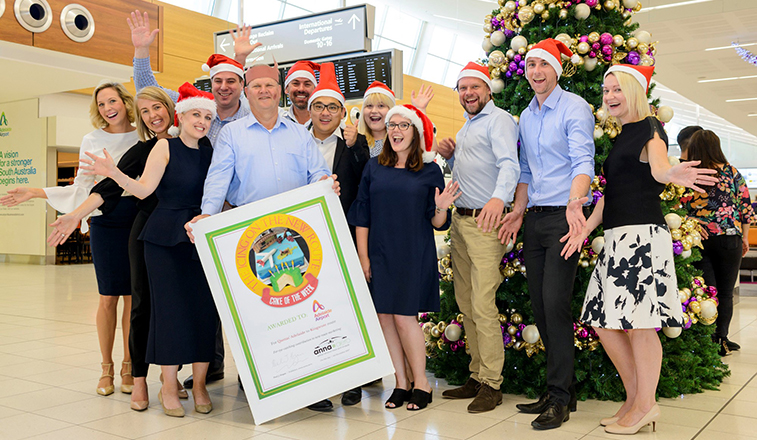 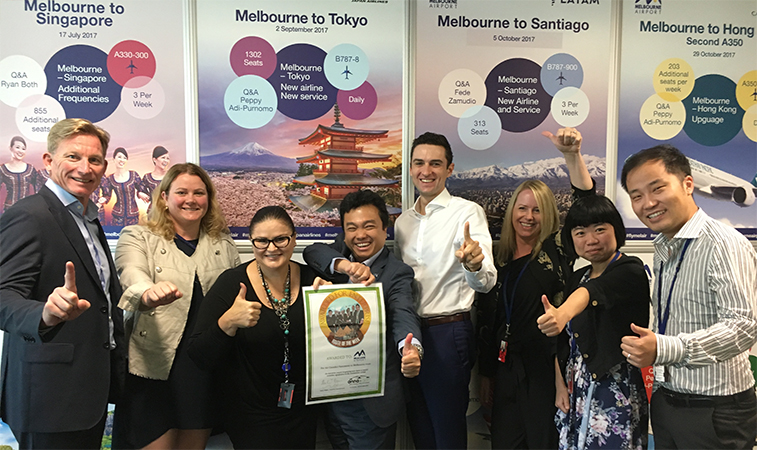 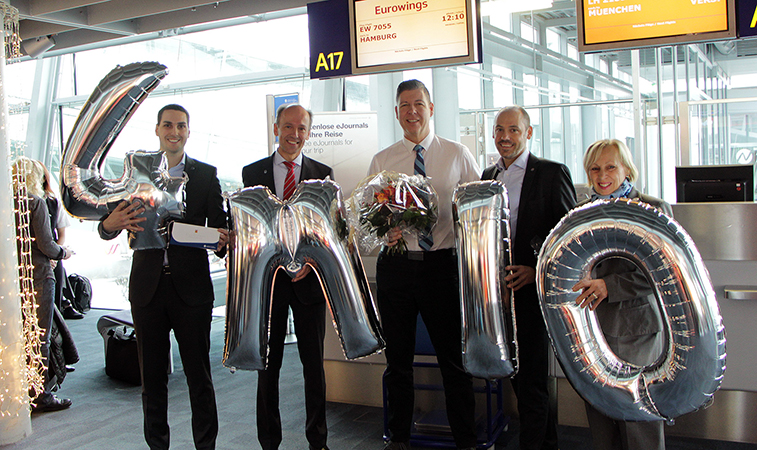 On 11 December Nuremberg Airport celebrated passing the four million passenger milestone in 2017. The lucky passenger, Oliver Schafheitle (centre) who was flying to Hamburg with Eurowings, was greeted with a duty free voucher, flowers and Christmas gingerbread (a local specialty) by the airport’s: Press Officer, Christian Albrecht; VP Marketing, Jürgen Kohstall; Head of Aviation Marketing, Christian Käser; and Manager for Passenger Services, Susanne Lang. “Flying from Nuremberg is simply fantastic,” said Schafheitle, who works for Signal Iduna and travels regularly from the airport on business. It is the first time since 2010 that Nuremberg has broken the four-million mark. Adding to that, it is the first time that the airport has passed the four million mark for originating traffic. The last time that Nuremberg reach this feat in 2010, some 800,000 passengers transferred via airberlin’s hub at the airport. 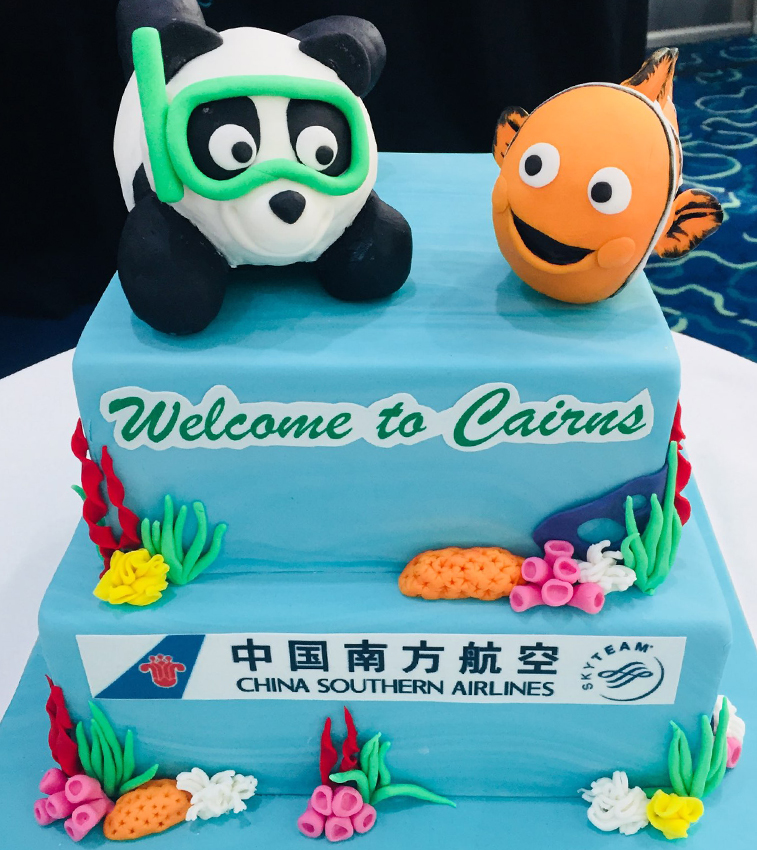 China Southern Airlines launched flights between Guangzhou and Cairns on 4 December, with the inaugural service landing in Australia the following day. To welcome its only Chinese connection, the Australian airport greeted the SkyTeam member with this fantastic cake, which depicts the new country city pair with a panda and clown fish. China Southern will operate the new connection three times weekly on a mixture of its A330-200s and -300s. 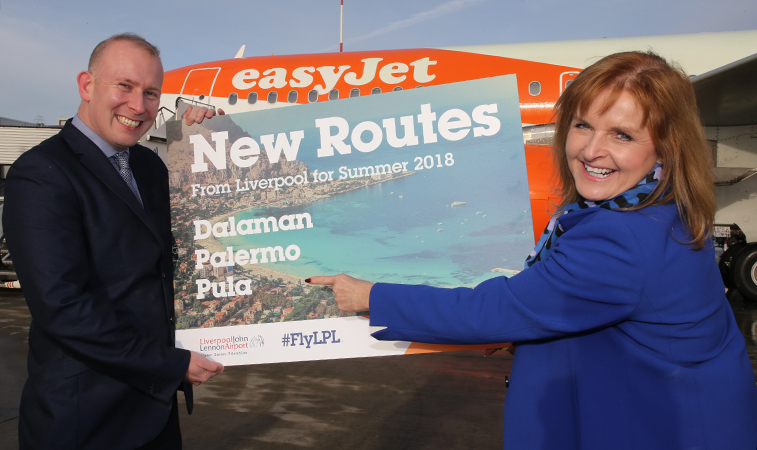 On 12 December easyJet announced that from S18 it will introduce three new services from Liverpool, namely Dalaman, Palermo and Pula. “We’re delighted to be adding three new summer routes from Liverpool. This announcement highlights our commitment to providing affordable routes to summer holiday destinations. We’re sure that they will prove extremely popular with passengers,” commented Ali Gayward, easyJet’s UK Country Manager, seen above announcing the new routes alongside Paul Winfield, Director of Aviation Development for Liverpool Airport. Winfield added: “We are delighted to see three exciting new destinations added to the Liverpool network with our largest airline partner. They are markets that will prove popular with passengers from across the North West.” Amsterdam Airport welcomed its first 737 MAX 8 flight on 6 December, with LOT Polish Airlines using the aircraft on its route from Warsaw Chopin. To mark the occasion, the Netherlands hub greeted the aircraft with a water arch salute, while tulips were given to passengers on the flight from the Polish capital. Istanbul Sabiha Gökçen celebrated the arrival of Utair’s new charter service from Vladikavkaz on 29 November, with the service being welcomed with a water arch and cake. The Russian carrier will operate the service twice-weekly (Wednesdays and Sundays) on its 737-400s. The charters will operate throughout W17/18. 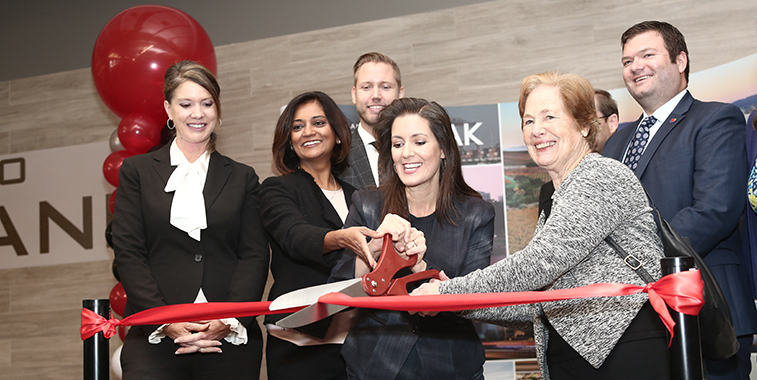 Oakland Airport recently opened its renovated and expanded international arrivals building. The $45 million Terminal 1 upgrade includes 13,000 square feet of additional space incorporating a new baggage carousel and an expanded passenger primary processing room – all creating a dramatically improved customer experience for arriving international travelers at Oakland. Seen taking charge of the ribbon cutting ceremony to officially open the new facility is Oakland Mayor Libby Schaaf. Bryant Francis, Port of Oakland’s Director of Aviation, said: “This is an incredible milestone worthy of recognition at Oakland, and we couldn’t be more proud to welcome our customers into this beautiful new space. We have worked in tremendous partnership with US Customs and Border Protection, multiple air carriers, and many other stakeholders in order to bring the promise of Oakland’s international potential to fruition.” Hermes Airports, operator of Larnaca and Paphos airports in Cyprus, this week celebrated passing the 10 million passenger milestone for 2017. This is the first time in their history that both airports combined have managed to pass the ten million passenger total. Commenting on the news, Marios Dimitriades, Minister of Transportation, Communications and Works, expressed his satisfaction at this great achievement. “I wish to congratulate both Hermes Airports and all those who contributed to this tremendous success. What we need now is to avoid complacency, continue the good teamwork and the positive results.” The lucky 10 millionth passenger was Latvian citizen, German Gedmintas, a permanent resident in Cyprus who was leaving Larnaca on a flight to Brussels. Along with Gedmintas being acknowledged as the 10 millionth passenger, a cake was made to toast the occasion. Dubai Airport’s firefighters have certainly been busy this week, producing two FTWAs. This first was created to greet flydubai flight FZ22 from Bahrain, with the UAE mega-hub producing the water arch to celebrate Bahrain’s National Day on 7 December. The flight was operated by one of the carrier’s newly acquired 737 MAX 8s. The FTWA was performed on stand E-09L by the Red Watch Crew, lead by A.DM#3316, with the arch officially being conducted at 18:12 by Fire-10 and Fire-02 who had left the station at 17:29. Two days later, Fire Commander #855 along with Fire-08 and Fire-03 left to attend stand C-58 from 12 station for the water salute ceremony of Med-View Airlines’ inaugural flight, VL 207, from Lagos via Abuja, a route it will fly three times weekly on its 767-300s. Although the new service is now up and running, flights are not bookable through the carrier’s website, suggesting that the service is a charter operation.