Cardiff-Naples is “Skyscanner Unserved Route of the Week” with 20,000 searches; Flybe’s next Italian job?? 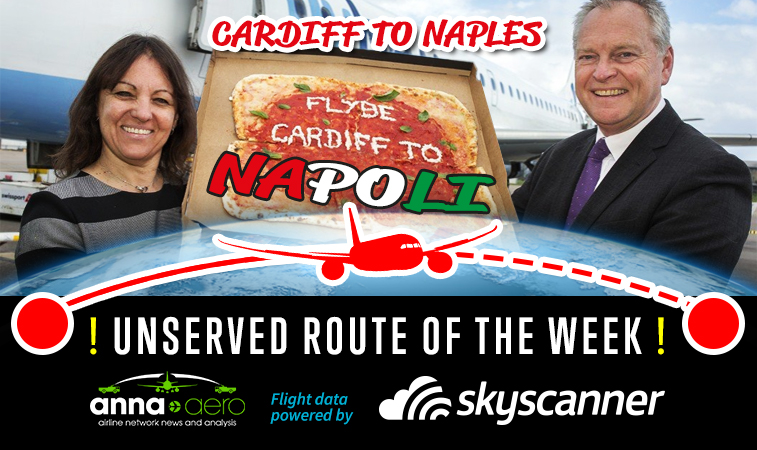 “Gimme a pizza that action!!” With 20,000 annual searches for a direct service between Cardiff and Naples, there is surely enough appetite for an airline to connect these two cities. With some 50,000 Italian-Welsh living in Wales, there is most certainly a strong market base wanting a slice of this route action. One for Flybe or TUI Airways to serve up?

With 20,000 searches in the last year, a potential city pair from Cardiff to Naples has been identified as this week’s “Skyscanner-anna.aero Unserved Route of Week” – a powerful analysis based on aspirational data captured from the Skyscanner.net flight comparison site used by +60 million unique visitors per month. “The last time we had a direct service was in 2006 [with TUI charters] with 8k passengers carried on the route,” says Spencer Birns, Commercial Director at the Welsh hub. “In 2016, [latest data] the market from South Wales to Naples was just over 27k passengers.” 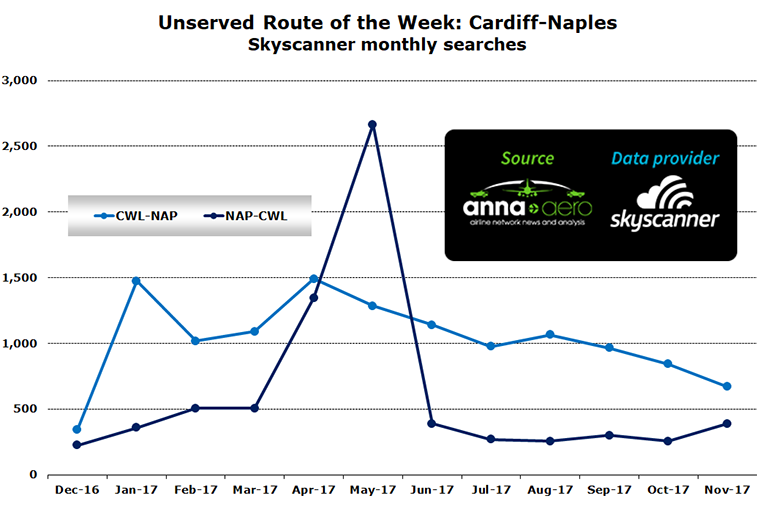 anna.aero thinks Flybe or TUI should take on this Naples route

Skyscanner demand on this week’s unserved route shows a preference towards the Cardiff end of the city pair, with a 62/38 split, so on this basis we looked at potential carriers at the Welsh origin first. According to OAG schedules for the week commencing 12 December, the largest carrier at Cardiff is Flybe (59% share of weekly seats). The airline’s 14-destination non-stop route network from the Welsh capital presently consists of 10 non-UK European destinations, including two in Italy – namely to Milan Malpensa (three times weekly) and Rome Fiumicino (twice-weekly). The carrier clearly has further expansion into Italy on its radar, having announced plans in November to start a twice-weekly Venice Marco Polo service next March according to anna.aero’s New Route Database, so it would seem that a potential route to Naples would not entirely be out of the question for Flybe.

Cardiff’s second biggest carrier KLM (13.9% share of weekly capacity) offers over 1,750 one-way seats on its 20 weekly flights to Amsterdam, and while it does not fly from its main hub to Naples, meaning it would not lose any feeder traffic it already carries, it is unlikely to consider starting a route to the Italian city from the Welsh capital. However, the third largest carrier at Cardiff, just behind the SkyTeam carrier, with a 13.5% share of weekly seats, is TUI Airways, and it does already have a significant presence in Naples. In S17 it offered up to three times weekly summer-only services from nine UK airports, including nearby Bristol. However, this proximity to its main competitor – Bristol is 98 kilometres or a one hour 24 minute journey from the Welsh airport – should not be a barrier to TUI starting a Naples service from Cardiff, as it flies to the Italian city from both Birmingham and East Midlands airports, which are just 59 kilometres apart (38-minute car journey). 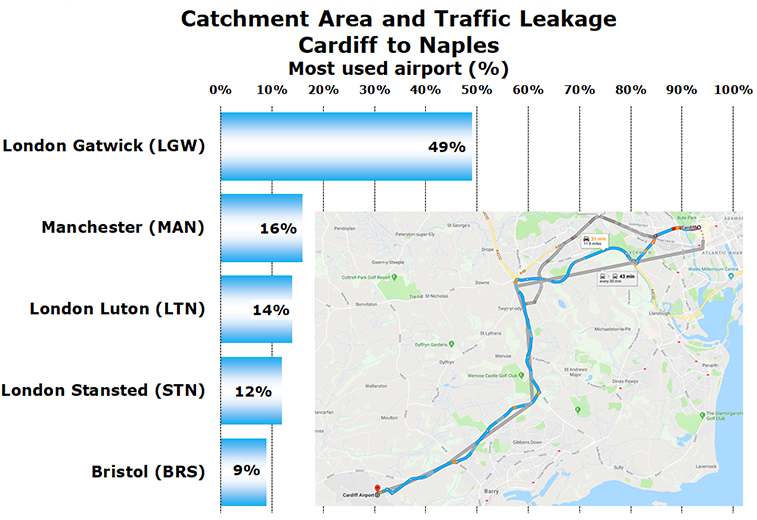 Matt Williamson Skyscanner’s Commercial Executive says: “Cardiff serves less than 1% of the catchment (50 km around the airport) going to Naples. With better service, such as a non-stop operation, Cardiff will capture most of that traffic currently leaking to competing airports.”

Contemplating the Italian end of the route, the airport’s #1 capacity provider of its current 27 serving airlines is easyJet, which offers 28% of weekly seats. The LCC already has a broad UK network from its 20th biggest operation, with services to London Gatwick (10 times weekly), London Stansted (nine) and London Luton (five) flown during the winter, routes which are joined by Bristol, Liverpool and Edinburgh in the summer season. It has also just announced plans to add Belfast International to its growing list of UK connections from the Italian airport in S18. If easyJet considered the proximity to Bristol as being a barrier to its entry onto the Naples-Cardiff city pair, then perhaps the Italian airport’s second largest carrier Ryanair might consider a link to the Welsh capital, particularly as it has no flights to that part of the UK. In S17, it had flights to Naples from London Stansted, Manchester and East Midlands only, so a W-pattern Cardiff operation could be a legitimate consideration.

When looking at the previous year of search data, the busiest month for potential traffic flows (for both directions on the route combined) is May 2017, with nearly 4,000 searches, around 3,400 higher than the lowest monthly figure, which was recorded in December 2016 (600 searches). The seasonality profile of this search data is significantly more extreme than last week’s Unserved Route of the Week (Brussels to Sao Paulo) with the low-month traffic representing just 14% of the highest month. As suggested by the catchment map above, travellers looking to get to Naples from the Cardiff region tend to leak by road to other UK airports rather than using a connecting air service. This situation is exacerbated by the fact that KLM, Cardiff’s main hub carrier, does not serve Naples, and therefore any unserved demand is not picked up via its Amsterdam hub. “74% of the Naples market from our catchment travelled for over three hours to Gatwick to make the journey,” adds Birns.

Indeed, an O&D market that is not served by a non-stop flight will typically display a low purchase rate and low traffic. In this instance Skyscanner’s Travel Insight indicates a monthly average of 0.9% for the Cardiff to Naples route (see graph below). Therefore, if there was a Cardiff to Naples route, and if bookings performed in line with the “Skyscanner market average” for direct services at both airports (5.9%), the airline operating this route could immediately expect a massive improved purchase rate of 556%, without any increased marketing spend. However, with 20,000 annual searches in the last 12 months, a once- or twice-weekly summer-only service should be immediately viable for the airline choosing to start this potential city pair. “Naples is one of the last unserved markets in Europe from Cardiff with a market demand in excess of 25k,” concludes Birns. 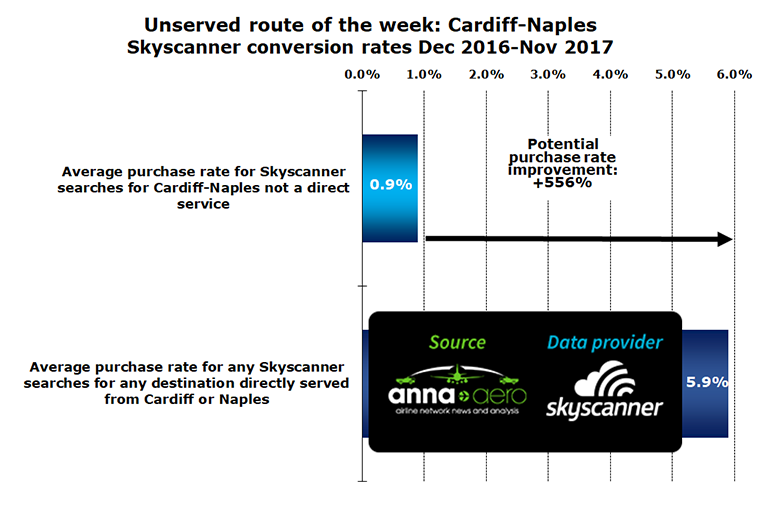