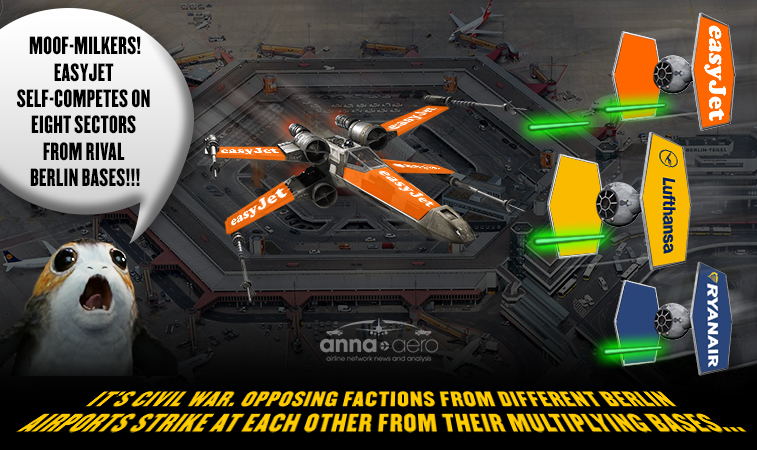 airberlin’s key domestic routes fall into enemy hands! easyJet doesn’t have any domestic routes from its existing Berlin Schönefeld base. So, of the 19 Berlin Tegel routes being launched, four busy domestic services, such as Tegel-Frankfurt, will really worry Lufthansa most. Interestingly easyJet will duplicate eight international services that it already offers from Schönefeld, including the likes of Budapest and Copenhagen.

easyJet already flies more than 5.3 million passengers to and from Berlin each year at its existing base at Berlin Schönefeld. Opened in 2004, Schönefeld is now easyjet’s sixth largest base (in terms of weekly seats) and currently serves 51 routes. But, while the Schönefeld base offers nearly 55,000 weekly seats (on over 320 weekly flights for w/c 11 December), on 5 January easyJet will also start four key domestic and 15 international routes from Berlin Tegel – potentially competing with itself!  The Tegel move follows a €40 million partial takeover of airberlin assets which received EU regulatory approval on 12 December. In order to enable the swift launch of the Tegel winter programme from the airport, easyjet will use some wet-leased aircraft alongside its own metal.

The new routes announced include four German domestic services connecting Tegel with Düsseldorf, Frankfurt, Munich and Stuttgart. easyJet will also add 15 international city pairs, including up to five daily flights to Vienna and Zurich, as well as connections to destinations like Palma de Mallorca and Catania. As a result it has put more than one million seats on sale for the remainder of W17/18, with more routes from Tegel to be announced for S18. The table below summarises the 19 new easyJet routes and their respective weekly frequencies, compared with the services previously flown by incumbent carriers (as of 1 October 2017), most importantly by airberlin.

While much of the focus has been on easyJet’s entry into the market, many of the incumbents on the specific airport pairs are staking their own claims on the capacity void which has been left by the demise of airberlin. The table below summarises the same new 19 routes, but this time reviews the services of easyJet’s direct Tegel competitors’ on w/c 7 March 2018, after all 19 of the new easyJet services will have commenced. However, it should be noted that some of these routes, in particular the more leisure-oriented ones, will have experienced some seasonal variation in frequencies which have nothing to do with the arrival of easyJet.

easyJet to face compeition from other airports – including from itself!

Aside from the direct competition that it will face out of Tegel, easyjet will also experience indirect competition from other carriers using other airport pairs from the cities involved. The table below summarises the same 19 new easyJet routes, but this time reviews its indirect competitors’ (flying to/from any airport at either end of the city pair; again on w/c 7 March 2018). The airport code(s) which are being used by the competitors represent those that are different from the 19 new airport pairs being introduced by easyJet.

What easyJet said about its Tegel transition

“easyJet is proud to deliver more competition and lower fares to passengers in Germany, particularly on domestic routes where there is currently limited choice,” says Thomas Haagensen, MD easyJet Europe. “Our schedule from Tegel also delivers excellent value for business passengers who will benefit from first wave departures enabling day trips to get passengers back home by dinnertime. From domestic to popular leisure destinations, key cities in the DACH region and across Europe, to the Nordic countries and beyond to Tel Aviv, we are pleased to be able to offer such a wide range of destinations from Berlin.”

Ryanair waiting in the wings too with Tegel operations planned

Never one to miss a golden opportunity, Ryanair has also applied for slots at Tegel, with plans to create a nine-aircraft base, as it too looks to fill the airberlin void. The Irish ULCC is in a similar market position to its European LCC competitor, as its new Tegel base would be in addition to the nine 737-800s it already has stationed at Schönefeld. The latter is currently Ryanair’s eighth largest base, offering nearly 50,000 weekly seats on close to 260 weekly flights (w/c 11 December).

On the Tegel move Ryanair’s CCO David O’Brien said: “Ryanair has applied for slots at Berlin Tegel and is prepared to invest up to $1bn in additional aircraft and double its Berlin traffic to 10 million over the next 18 months. This investment would guarantee access to Ryanair’s lowest fares, and enable Berlin citizens and visitors to avoid the emerging high fare Lufthansa/easyJet duopoly.” 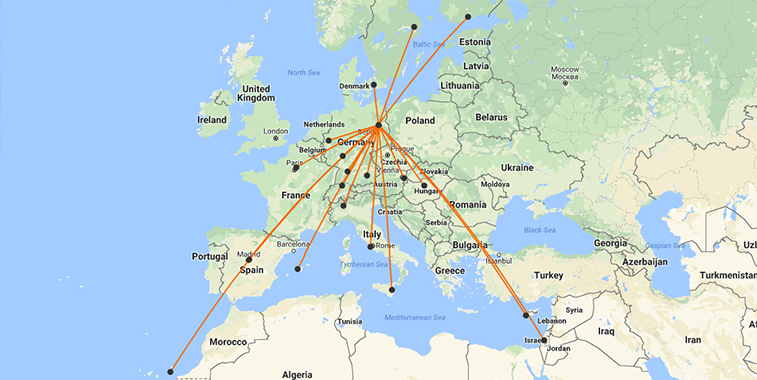 easyJet’s newest base from Berlin Tegel will feature four domestic and 15 international sectors, with the first flights beginning in early-2018. Among those routes being added is the return to the easyJet network of flights to Helsinki, which will be flown daily from the German capital from March.