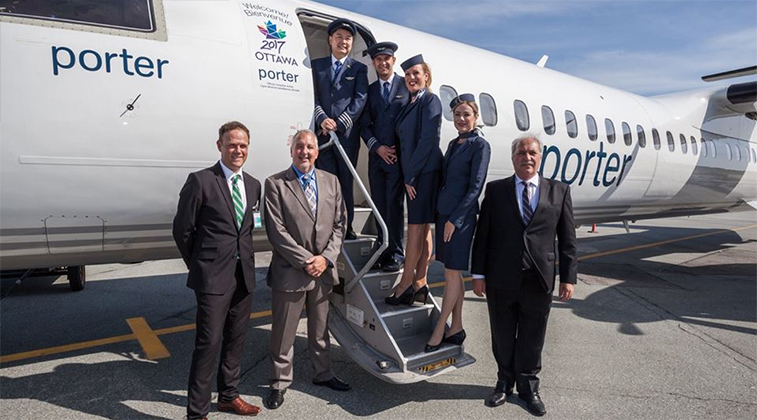 Saint John Airport became the third airport in New Brunswick to offer Porter Airlines flights on 21 September, the day which saw the carrier commence a daily rotation from Ottawa, with the service originating in Toronto City. Seen welcoming the inaugural crew on the apron are: Jacques Fournier, Director of Airport Commercial Development, Saint John Airport; Derrick Stanford, President and CEO, Saint John Airport; and Paul Moreira, SVP and COO of Porter Airlines. Saint John is one of two new destinations on Ottawa’s departure board this year, with the other being Orlando Melbourne, a route which will start on 16 December. Overall traffic from Ottawa is expected to grow by 1.8% this year.

Ottawa Airport, serving the capital of Canada, is located in a metro area with a population of around 1.32 million (2016 estimate), with this total having grown 5.5% since 2011 according to the latest census data. It means that Ottawa is Canada’s fourth largest city, and the country’s fifth largest metropolitan area. According to a 2013 article by the National Post, Ottawa is the most educated city in Canada, plus it has the highest standard of living in the nation and low unemployment. It ranked second nationally, and 24th in the world in the quality of life index according to Numbeo, a large database of user contributed data about cities and countries worldwide. In addition the city is constantly rated as the best place to live in Canada. With this sort of data, it is no wonder that traffic from the city’s airport has steadily grew over the past few years as more people visit Ottawa. Nonetheless, while traffic has grown, it is not necessarily consistent in all markets.

So far this year (January to November), Ottawa has handled just under 4.43 million passengers, up 1.8% on the same 11-month period of 2016. While the result is showing that the overall market from the Canadian capital is stable, when we breakdown the total figure into individual sectors it tells a different story. The leading provider of Ottawa’s growth is the domestic market, with it reporting a 3.4% upswing in passengers between January and November to above 3.5 million, up from 3.38 million during the same period of last year. However, the gains being seen in the intra-Canadian market offset the performance of transborder and international markets, with the former seeing a 5.1% reduction in travellers this year (up until 30 November), while the latter sector has encountered a 2.8% cut in traffic when compared to the first 11 months of 2016. 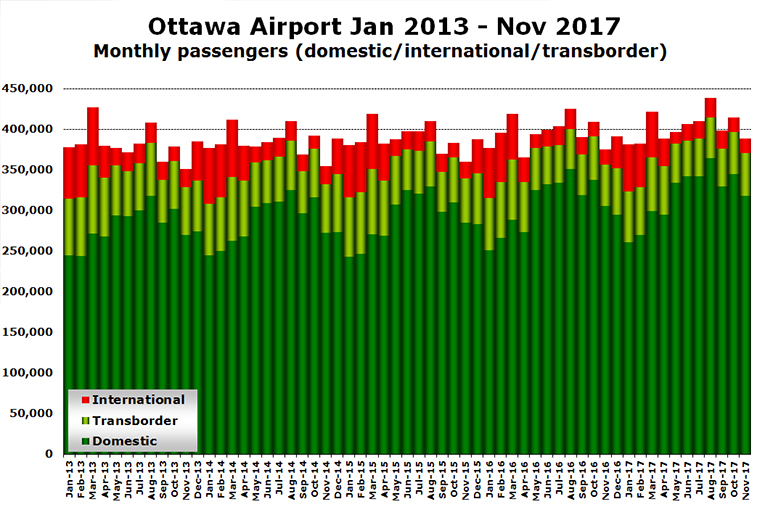 Because of the rise in domestic passengers offsetting the cuts being seen in international markets, it means that the intra-Canadian market share has increased from 73% in 2013 to 79% for the first 11 months of this year. With an average growth rate of 1.8% being recorded for total traffic from Ottawa so far this year, it means that for the end of 2017 the airport should process just over 4.8 million passengers, the first time the airport will have reached this feat in recent history. Of these 4.8 million passengers, 3.8 million of these will be domestic. As can bee seen from the graph above, most of Ottawa’s international travellers fly through the airport between November and April, with these six months processing 68% of the airport’s annual international passengers.

Leading carriers report cuts despite traffic being up

The number one carrier at Ottawa is flag carrier Air Canada, with the Star Alliance member accounting for 51% of departing seats this year (including Air Canada Express operations). However, the dominant airline has seen its market share drop from 53% in 2016, no doubt due to the carrier reporting a 3.4% capacity reduction this year from Ottawa when referring to OAG schedules. Along with Air Canada, WestJet, Ottawa’s second largest airline, is also reporting cuts in capacity, with it offering 0.4% less seats in 2017 versus 2016. Of the airport’s top 10 airlines, three are non-Canadian based carriers (highlighted in light green), with the trio also being known as the USB3, namely United Airlines, Delta Air Lines and American Airlines. 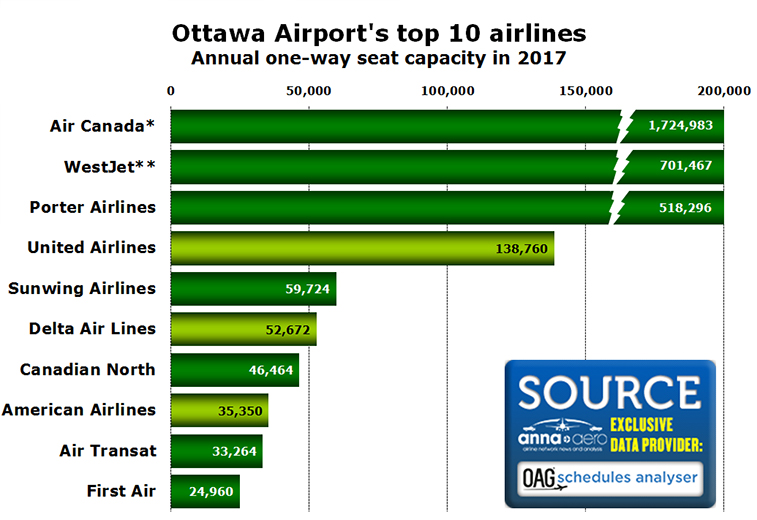 While the number of passengers travelling through Ottawa this year should grow by around 1.8%. when referring to OAG schedules the number of seats being provided by airlines in 2017 has dropped by 0.4%. So while seat capacity is showing to be down, with the increased passenger numbers it must mean that the average load factor from Ottawa will have increased slightly this year.

One of the newest routes to launch from Ottawa this year is Saint John, a sector inaugurated by Porter Airlines on 21 September, a daily service which originates from Toronto City. Along with Saint John, a further destination will join Ottawa’s departure board this month, with 16 December being the day which will see Porter begin a new seasonal service to Orlando Melbourne in Florida. Of the airport’s existing connections, the number one link is to Toronto Pearson, with this accounting for 32% of Ottawa’s departing seat capacity in 2017, down from a 33% share last year. Of the airport’s top 12 routes, three (highlighted in light green) are non-Canadian connections, with one also being Air Canada’s transcontinental service to London Heathrow. Along with the year-round service to Europe’s busiest airport, Ottawa also offers a summer seasonal link to Frankfurt which is flown by Air Canada. 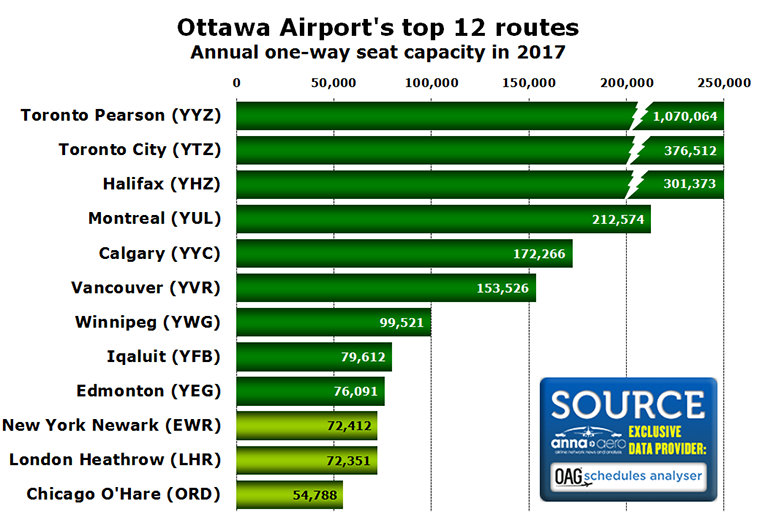 Although the airport this year has gained services to Saint John and Orlando Melbourne, one route has been dropped at Ottawa since the beginning of last year. Flights to Las Vegas were stopped by WestJet in April 2016, a route that was flown twice-weekly since 2010. Taking a look at data from OAG Traffic Analyser, in the 12 months after WestJet’s culled the Las Vegas sector (May 2016–April 2017), over 47,400 passengers travelled indirectly between Ottawa and the Nevadan city, with the top connecting airports being Pearson, Montreal and Chicago O’Hare. This traffic demand translates to around 65 PDEW (Passengers Daily Each-Way). 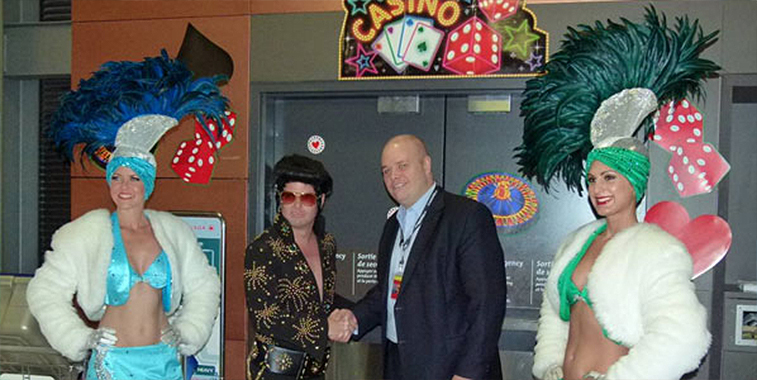 Back on 9 December 2010 WestJet began flights between Ottawa and Las Vegas. Unfortunately, in April last year the carrier pulled the twice-weekly service. When referring to OAG Traffic Analyser data, in the 12 months following the service cut, over 47,400 passengers travelled indirectly between the two cities (around 65 PDEW).