Norwegian adds Amsterdam, Madrid and Milan Malpensa to its transatlantic network; over 4.7 million passengers now flown to US 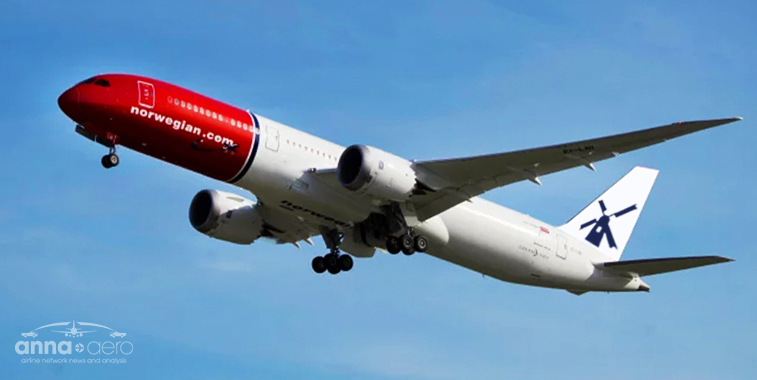 Could the windmills of the Netherlands soon be adorning the tailfins of Norwegian’s 787-9s? The carrier will soon be making the aircraft a regular feature at Amsterdam, with it launching New York JFK services from 7 May 2018, with routes from Madrid and Milan Malpensa also being launched in 2018. One of the last European operations to be inaugurated by the carrier using the 787 was from Barcelona, with its long-haul base in Spain so far achieving an average load factor of around 88% (up until 30 November), matching its first year achievement on transatlantic services.

Norwegian has announced that from the next summer it will introduce Amsterdam, Madrid and Milan Malpensa to its transatlantic network. With these three cities now offering flights to the US, it means that 16 European cities will have low-cost long-haul (LCLH) services with the carrier in S18. The others are Barcelona, Belfast International, Bergen, Copenhagen, Cork, Dublin, Edinburgh, London Gatwick, Oslo Gardermoen, Paris CDG, Rome Fiumicino, Shannon and Stockholm Arlanda. The routes announced by Norwegian from Amsterdam, Madrid and Malpensa will all be flown by the carrier’s 787-9s according to its booking engine. The table below illustrates the new routes and their days of operation from the European end of the sectors.

Flights between Amsterdam and JFK will go head-to-head with KLM (20 weekly flights) and Delta Air Lines (twice-daily), while the Madrid to JFK leg sees direct competition from Iberia (twice-daily), Air Europa, American Airlines and Delta (all daily). The connection from the Spanish capital to Los Angeles will compete with Iberia (six times weekly), while the link between Malpensa and California is the only service to be announced by Norwegian which will not see any direct competition. It should be noted that Amsterdam and Madrid are both connected by United Airlines to New York Newark, with the Star Alliance member operating to both European airports with a daily wide-body rotation. One advantage for Norwegian is that Delta is ending its Newark to Amsterdam service at the start of S18.

Madrid becomes Norwegian’s second airport in Spain to gain LCLH flights, with the carrier in June this year having established flights from Barcelona to New York Newark, Fort Lauderdale, Los Angeles and Oakland. Since its launch from Barcelona, the carrier has carried 123,370 passengers (up until 30 November) on US flights from the Spanish city when referencing Aena statistics, representing an average load factor of around 88%, matching that seen in the airline’s first year of transatlantic services (more detail below).

Norwegian is entering competitive airports with its next batch of transatlantic routes, however this has not stopped it before, particularly given its statement of entering the Paris CDG market last year. Amsterdam, Madrid and Malpensa as a collective had their strongest performance to the US in 2017, with the trio combined already offering over five million one-way seats to the US this year. Of course the biggest player is Amsterdam, with it serving up over 3.1 million departing seats across the Atlantic to the US in 2017, up 6.9% when compared to 2016. This is its best rate of growth in the US market since 2008 when it achieved a growth rate of 8.8%. Madrid has seen a 5.4% increase in seats to the US in 2017 versus 2016, while Malpensa has encountered a 0.8% rise, its slowest growth rate in recent years. 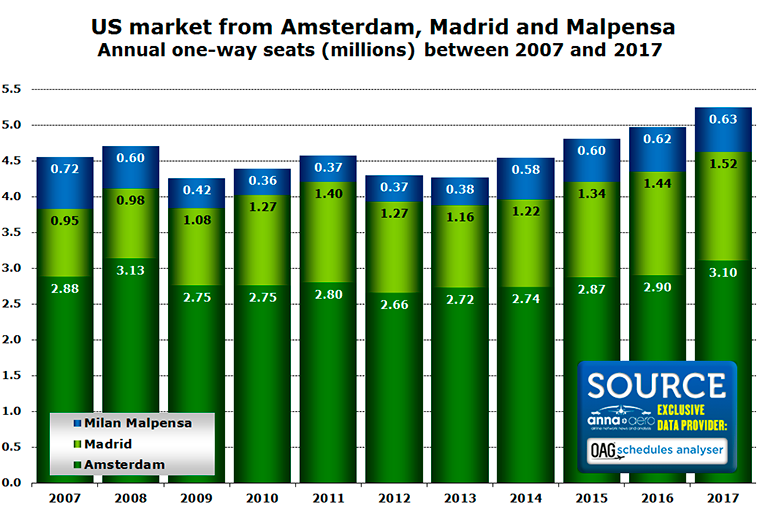 So judging by the markets which Norwegian has selected to penetrate with its low fares, it is aiming to stimulate markets which appear to have plateaued (Maplensa), while also enhance thriving markets (Amsterdam and Madrid). Norwegian however is not the only carrier to be adding US capacity in 2018 from these airports. Delta will introduce Los Angeles and Orlando to its Amsterdam network, while Iberia is adding San Francisco from the Spanish capital in April. Norwegian at present appears to be the only carrier adding US services from Malpensa next year.

4.7 million passengers flown in first 49 months of US operations

Norwegian first entered the transatlantic market back May 2013, with its first routes being from Oslo Gardermoen and Stockholm Arlanda to New York JFK. By the end of that year the carrier was also serving Fort Lauderdale from both Scandinavian airports, along with a service to the Floridian city from Copenhagen. During 2013, the airline carried 104,498 passenger to/from the US according to the Bureau of Transportation Statistics (BTS), giving the carrier an average load factor of 87% during 2013. Since its first flight up until 31 May 2017, the carrier has flown 4.7 million passengers on US operations. 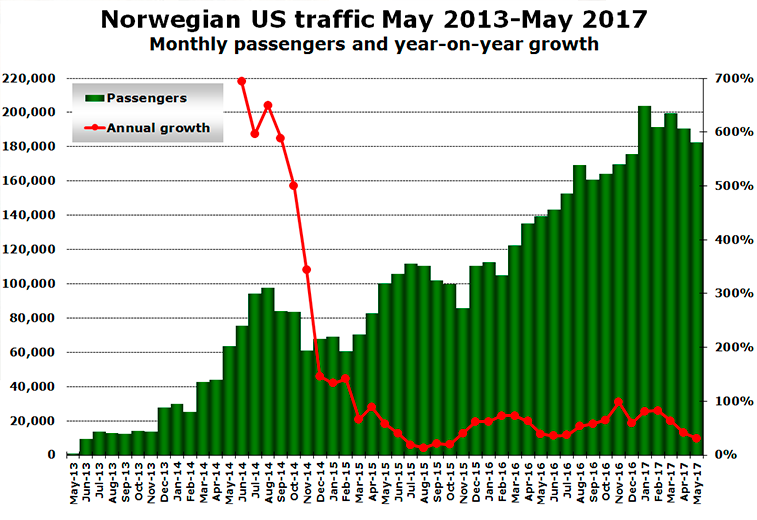 In 2016 Norwegian carried 1.75 million passengers on US flights, an increase of 58% over the total it flew in the market during 2015. Last year the average load factor achieved by Norwegian from the US was 92%, while for the first five months of this year it was around 95% when applying BTS statistics to OAG schedules-derived capacity. Among the milestones for the carrier in 2017 is the feat it reached in January, when Norwegian handled over 200,000 passengers in a month from the US. 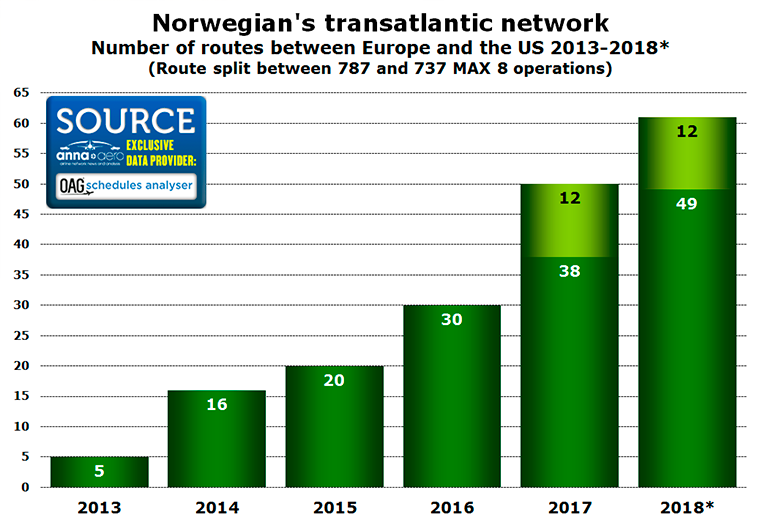 With the addition of its Amsterdam, Madrid and Malpensa services, 2018 looks set to be the biggest year-on-year increase in net routes between Europe and the US, with the 11 new sectors being gained in 2018 matching the 11 that were introduced to the network between 2013 and 2014. The smallest increase was seen between 2014 and 2015, when only four routes were drafted onto the network. 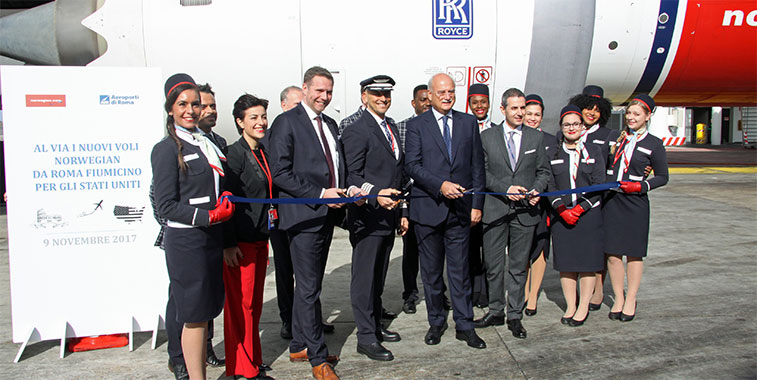