Airbus and Boeing increased productivity in November by 15%, delivering a combined 144 aircraft; Emirates welcomes 100th A380 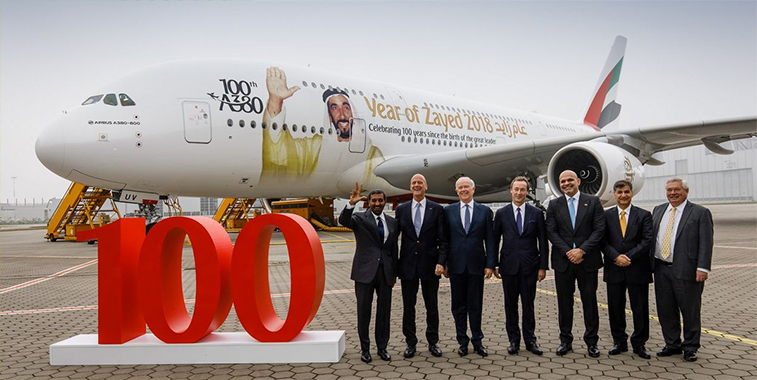 Airbus and Boeing delivered a combined 144 aircraft during November, 25 more than the 119 units that the duo delivered in the previous month, and 19 (15%) more than the two manufacturers achieved in the same month of 2016. By handing over 144 aircraft, November becomes the most productive month this year so far for deliveries, beating the 139 combined aircraft that the two handed over in June. For a third month this year, Airbus outperformed its North American rival, joining October (seven more deliveries than Boeing) and May (four), with the European aircraft maker delivering four more units in November than Boeing (74 units to 70).

Boeing’s lead in the 2017 delivery race has subsequently reduced once again, with the margin it has over Airbus decreasing from 93 units to 89 (up until 30 November 2017). In total, the two companies have delivered 1,271 aircraft during the first 11 months of this year, 13 more than the 1,258 that Airbus and Boeing had sent to customers during the same period of 2016. This represents a big boost in productivity for both manufacturers. Up until 31 October, the two giants were 0.5% behind the productivity rate that they reported up to that date in 2016. However, in handing over 19 more aircraft than they did during November 2016, the two are now 1.0% ahead of where they were at this point last year (30 November 2017 v 30 November 2016). 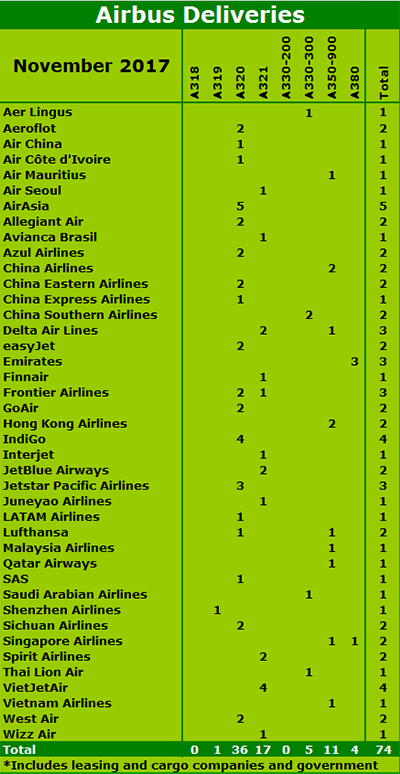 Airbus delivered 74 aircraft in November, 11 more than the 63 managed in October.  The result is also good when compared to the same month of 2016, when the European giant handed over 61 units. For the 11th month of 2017, single-aisle deliveries were led by the A320 (36 units) followed by the A321 (17), while one A319 was handed over to Shenzhen Airlines. The leading customer of the A320 was AirAsia which received five, with the Asian LCC being followed by IndiGo which picked up four. With regards to the A321, the leading customer was Vietnamese carrier VietJetAir, collecting four of the type, while US carriers Delta Air Lines, JetBlue Airways and Spirit Airlines were the joint second largest customers, with the trio taking home two each respectively.

In relation to the wide-body market, Airbus delivered 20 units, six more than it managed in October. The leading wide-body aircraft type for an eighth consecutive month was the A350, with 11 being handed over to nine different airlines, including Malaysia Airlines which has become the latest operator of the model, meaning 17 airlines worldwide now use the aircraft (up until 30 November). The leading A350 customers were China Airlines and Hong Kong Airlines which both collected two each. Besides the A350, five A330-300s and three A380 were delivered. Among the A380 deliveries in November, all of which went to Emirates, was the MEB3 carrier’s 100th example. Sheikh Ahmed bin Saeed Al-Maktoum, CEO and Chairman of the Emirates Group, said of the milestone: “This is a tremendous moment for Emirates, for Airbus and for our many partners involved in the A380 programme. There is no doubt that the A380 has had a big positive impact on aerospace manufacturing and the broader aviation industry, supporting hundreds of thousands of jobs and stimulating innovation and new product development in many related areas such as ground handling, catering, airport facilities and cabin products, to name a few. For Emirates, the A380 has been a success. We’ve been able to utilise it at slot-constrained airports, as well as at regional and ‘secondary’ airports where we have grown passenger demand. Each time we deploy an A380 onto a route, it typically stimulates further traffic and demand as travellers are attracted by our flagship A380 experience. We remain committed to the programme and will work closely with Airbus and our partners to continually enhance our A380 product as we look ahead to receiving our remaining 42 aircraft on order.” 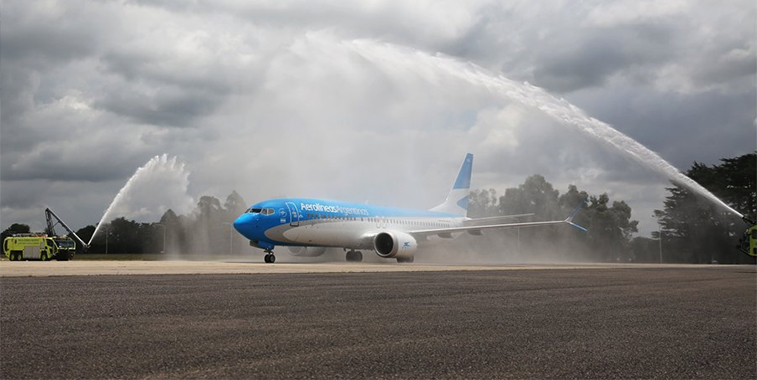 Aerolineas Argentinas became the first South American operator of the 737 MAX 8 in November when it collected its first of the type, seen here receiving a water arch salute operating its first commercial flight, a domestic route between Buenos Aires Aeroparque and Mendoza. The carrier is expected to collect a further 11 737 MAX 8s from Boeing. 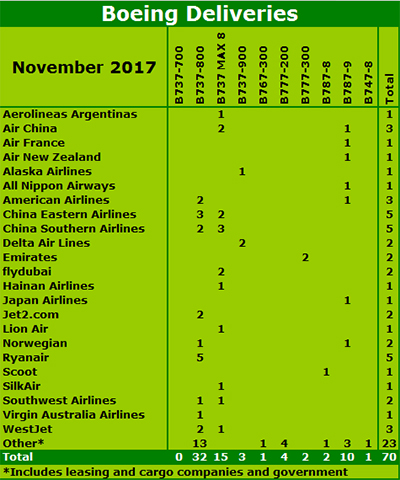 Boeing delivered 70 aircraft in November, 14 more than it provided in October and six more than it achieved in the same month last year. Of those 70 deliveries in month 11, 15 were 737 MAX 8s, meaning the US giant has now delivered 49 of the type (up until 30 November). Aerolineas Argentinas, Air China, China Eastern Airlines, China Southern Airlines, Hainan Airlines and SilkAir are among the newest operators of 737 MAX 8s. The most popular narrow-body unit in November however was the 737-800, with 32 being handed over, two more than the 30 it distributed in the previous month. The leading customer of Boeing’s premier narrow-body model was Ryanair which took home five, with China Eastern Airlines being the second largest recipient, receiving three. In total, Boeing handed over 50 narrow-body aircraft in November, four less than Airbus achieved. Along with the 737-800 and 737 MAX 8, three 737-900s were also distributed to Delta (two) and Alaska Airlines (one) with the two US airlines being the sole customers of this aircraft type in October, September and August. 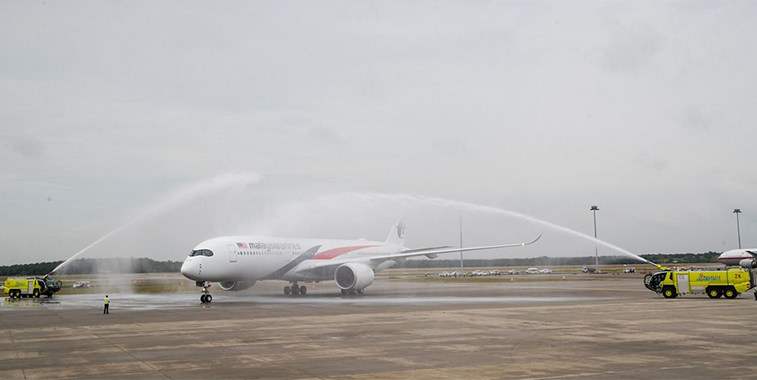 Malaysia Airlines took delivery of its first A350 in November, with the aircraft being welcomed to its new home at Kuala Lumpur Airport with a water arch salute. “We are very excited to welcome this new addition to our family. With its technological advancements, the A350 is an important milestone for us on this journey, helping boost our competitiveness on our long-haul flights. The addition of the A350 also underlines our commitment to operate a young and modern fleet,” commented Malaysia Airlines CEO Captain Izham Ismail. There are now 17 airlines operating the A350.