Gran Canaria on course to topple 13m; BinterCanarias is #1 carrier 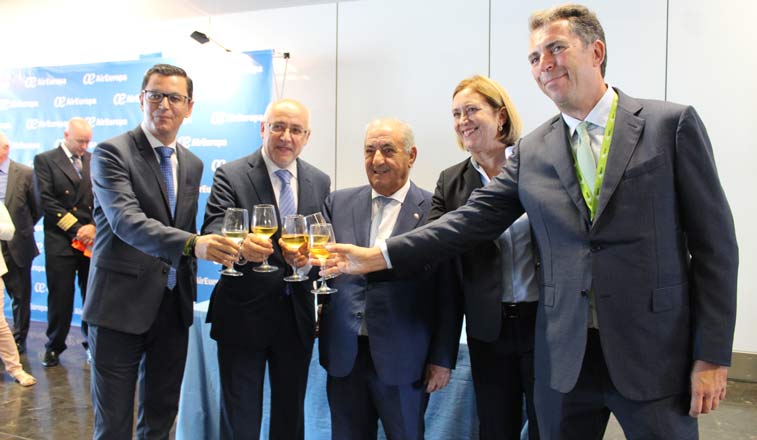 Air Europa celebrated the launch of services from Gran Canaria to Tenerife North on 30 October this year. The SkyTeam carrier also commenced flights to Fuerteventura and Lanzarote from Spain’s sixth busiest airport. Domestic links are the life blood of Gran Canaria, with five of its top 12 routes (by weekly seats) being internal sectors.

Gran Canaria was Spain’s sixth busiest airport in 2016, behind the country’s two hubs in Madrid and Barcelona, as well as the inbound traffic hot spots of Palma de Mallorca, Malaga and Alicante. However, as the main operational base (in terms of weekly seats and frequencies) for the Canaries’ inter-island operator BinterCanarias, the airport is the fifth busiest in Spain for movements and cargo throughput, according to Aena data for last year.

The airport is currently served by 43 airlines (based on OAG schedules for w/c 18 December), a tally which unlike the vast majority of Europe’s airports (and indeed Spain’s) peaks in the winter and not the summer, given the fact that the island is a winter sun destination but with a growing year-round appeal. The same can be said for the airport’s network of non-stop destinations, which rises from 113 in August to 128 in December.

The airport’s traffic figures ebbed and flowed throughout the period 2007-2013, breaking the 10 million annual passenger milestone on three occasions, only to be pegged back in the years that followed. However since 2013, Gran Canaria’s passenger numbers have plotted a steady upward trajectory, averaging a solid 7.5% annual growth between 2014 and 2016. 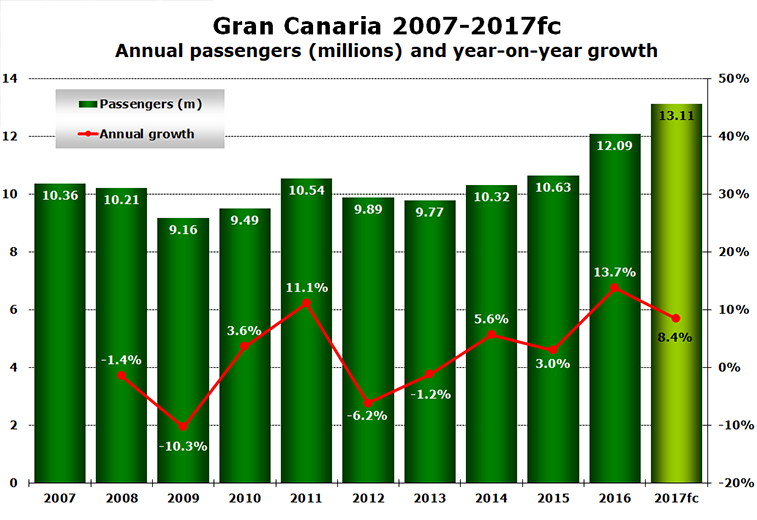 So far in 2017, the airport’s monthly growth has smashed the double-digit barrier five times, with a pinnacle in April (+16%), but it has also been as low as just 1.3% in February. Taking the average monthly increase of 8.4% so far in 2017 and applying it to the last month of the year (Aena’s November statistics being the latest available), should see Gran Canaria pass the 13 million barrier for the first time in its recent history, and comes only one year after breaking the 12 million passenger landmark. It should also be noted that during some months of the year Gran Canaria is actually Spain’s third busiest airport in terms of passenger throughput, as it was in November 2017, due to more seasonal traffic flows at Palma de Mallorca, Malaga and Alicante.

Given Spain’s appeal for inbound tourism, Gran Canaria could easily be an airport with some difficult to manage seasonality extremes, however its monthly traffic in 2016 proves otherwise. When using anna.aero’s SVID calculator, the airport delivers a score of 1.26, which gives it an “Excellent” rating. This sees the Spanish facility nestle between Milan Linate (1.25) and Paris CDG (1.57). Comparing this seasonal performance against those of its nearest rivals – Spain’s fifth largest airport Alicante and seventh largest Tenerife South – Gran Canaria does well, offering a flatter traffic profile than the former (scoring 10.46 or “poor”) and just behind the latter which also managed an “Excellent” rating, but with a slightly better score of 0.88. 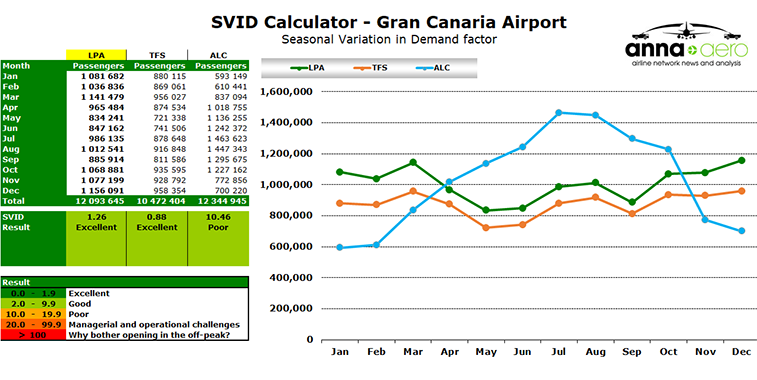 When looking at the 2014 and 2015 seasonality score of Gran Canaria’s monthly throughput, again the airport seems to be making good progress in flattening the profile of its traffic. In 2014, the airport achieved a “Good” rating with a score of 2.16, and then slightly improved on this in 2015 to deliver a similar result of 2.10. Looking forward to this year’s SVID score for Gran Canaria, the anna.aero data elves are predicting further advancement in the “Excellent” category with an anticipated score of around 1.06.

Rather than look at the year-on-year development of Gran Canaria in terms of its top airlines and routes, we have considered the airport’s schedules for this week versus those in a typical week in the summer (w/c 14 August 2017). While the top two carriers go unchanged between the two weeks, and Ryanair’s capacity is largely unchanged (winter has 1.1% less seats than the summer), the #1 capacity provider in both sample weeks – BinterCanarias – has 14% more seats available in December when compared to August at Gran Canaria. However the airline with the biggest step-up in its winter capacity versus the summer is Thomas Cook Scandinavia, which will offer nearly 850% more seats (11,572 vs. 1,216). On the flip-side of this trend is Transavia, which will provide 32% less seats in the winter against those it flew in August. 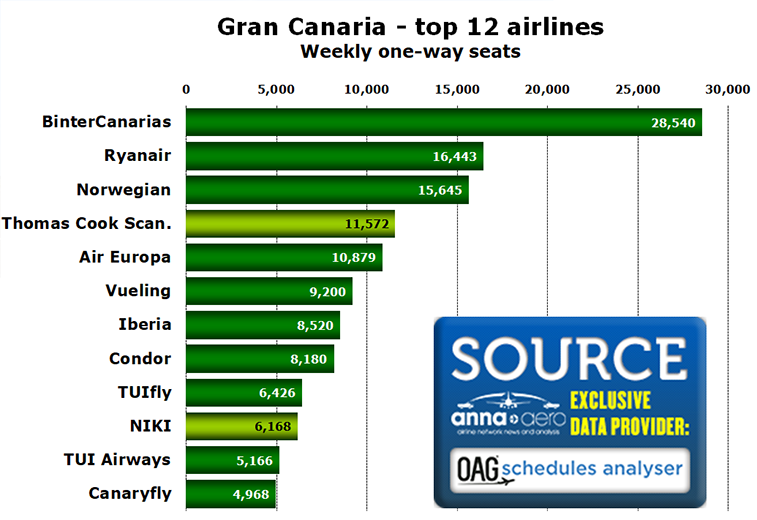 Two airlines (highlighted in light green), Thomas Cook Scandinavia and NIKI, represent those carriers which have broken into the top 12 for the sample winter week when compared to the summer week, when they were in 20th and 13th spots respectively. However, given the current perilous situation of the Austrian LCC, whether it will maintain this position inside the top 12 is going to be a challenge. These two airlines replaced Jet2.com and Transavia, which were inside the S17 top 12, as they fell to 14th and 19th places respectively. One airline which is noticeable by its lack of presence is easyJet, being 17th in the winter schedule (2,964 weekly seats) and 18th in the summer programme (1,482 weekly seats).

Capital and Canary connections are king

Domestic services at Gran Canaria are the life blood of the airport’s weekly seats, with five Spanish destinations featuring in both the winter and summer schedules. While capacity to Madrid (-4.2%) and Barcelona (-0.6%) are both reasonably static, the seats available to other Canary Islands are more volatile between winter and summer, but all three – Tenerife North (+108%), Fuerteventura (+26%) and Lanzarote (+17%) – have more flying in December against than that offered in August. However, all three routes will have benefited from Air Europa’s decision to launch inter-island services in the Canaries from October this year. 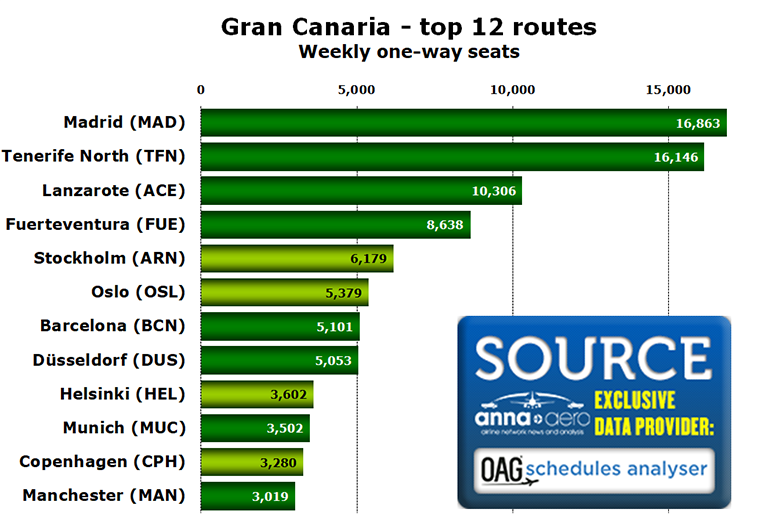 There is a Scandinavian invasion to Gran Canaria during the winter months, with four routes entering the airport’s top 12 which were more or less non-existent in the summer schedules. Leaping from 41st spot to 11th, courtesy of a 326% increase in December versus August flying is Copenhagen, with Stockholm Arlanda rising from 24th to fifth (up 320%), and Oslo Gardemoen climbing from 17th position to sixth overall (up 186%). However, it is perhaps Helsinki’s move into the top 12 which is the most dramatic, as it has no flying programme during the summer, but makes it to ninth place in the winter. These four airports oust London Gatwick (7th in summer), Amsterdam (9th), Birmingham (10th) and Cologne Bonn (12th) from the summer top 12. However, both of the UK airports’ capacity fall – Gatwick down by 27% between the seasons, while Birmingham fell by 40% – along with that experienced at Manchester too (-24%) – is largely as a result of the demise of Monarch Airlines in October.

Looking ahead to the remainder of W17/18 and beyond, the Spanish airport is set to welcome a five times weekly service from Berlin Tegel (starts 10 January) and a three times weekly operation from Nuremberg (starts 17 January) from Eurowings, as well as Condor beginning a weekly rotation to Gran Canaria from  Cologne Bonn on 4 May. 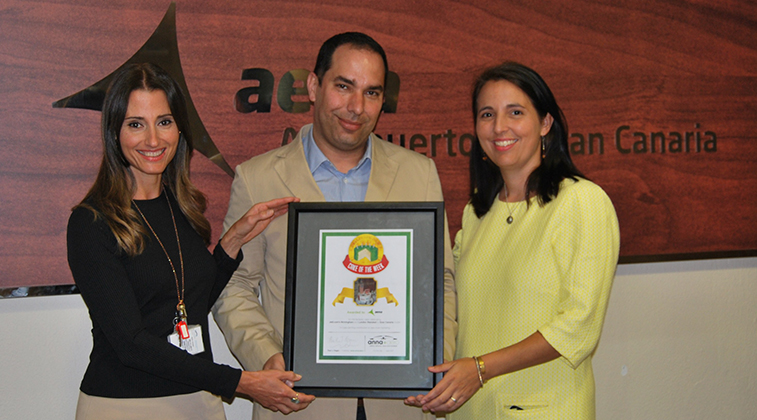 Back in April, Gran Canaria Airport won the Cake of the Week Public Vote for the celebration it had at the launch of Jet2.com’s flights from Birmingham and London Stansted. Despite being on track to break 13 million annual passengers this year, the demise of Monarch Airlines and the issues at NIKI will have an impact on the airport’s year-end.