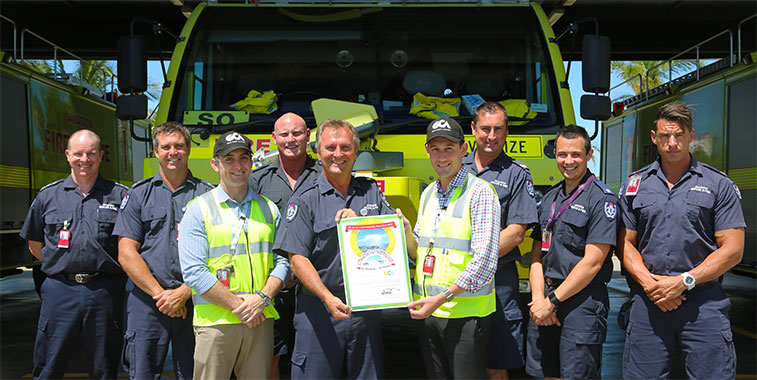 A rough rule of thumb is that a FTWA scoring 35 points or more is from the top drawer, and is probably more than likely to win the weekly competition. However, in Week 48 of this battle for airport marketing supremacy, and with just one week of FTWA dueling left in 2017, we have had not one, two or indeed three but four water arches from airports around the world scoring more than 35 points, which in an ‘ordinary’ week would have romped home to victory. Two of them are special FTWAs, with a unique flavour, the likes of which have never been seen in this competition in its five-year history. So you are in for a real festive treat for the eyes. Keep Monitoring!! 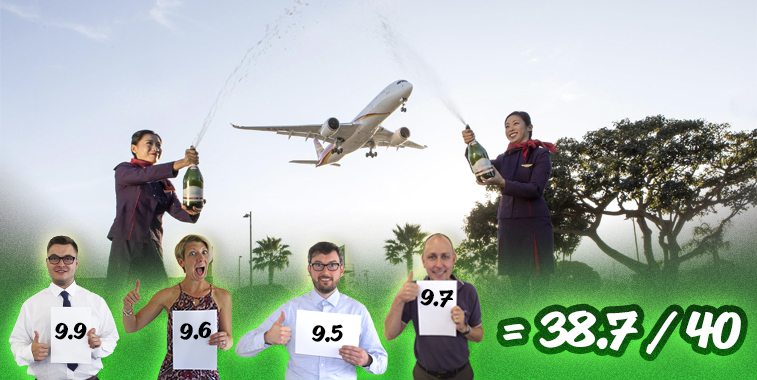 An FTWA with a bit of Hollywood sparkle!!

Judges’ comments: Talk about leaving it late to make an impression! With just one week of competition remaining in 2017, Los Angeles has fizzed into this year’s Arch of Triumph battle with an FTWA never been seen before. With this bubbly water arch not only has it won this week’s duel, but it has exploded into top spot on the leader board, ousting Sochi/Adler which had been #1 since April. However, its position is well deserved and we sincerely hope that it will be Champagne all round for the airport… Judges’ comments: anna.aero reader Michal Weyna sent us this unique FTWA from Chiang Mai: “I am happy to share FTWA 2.0 for Qatar Airways’ first service to Chiang Mai. Its innovative concept will surely be appreciated by all hippies and hipsters of the world as it is locally produced, i.e. ecological. As an eye witness I assure you that no water was wasted in the process. Flora and fauna around the terminal expressed their gratitude on this auspicious occasion and hereby welcome Qatar Airways to Chiang Mai – Thailand’s Capital of Culture!” And we love it!! 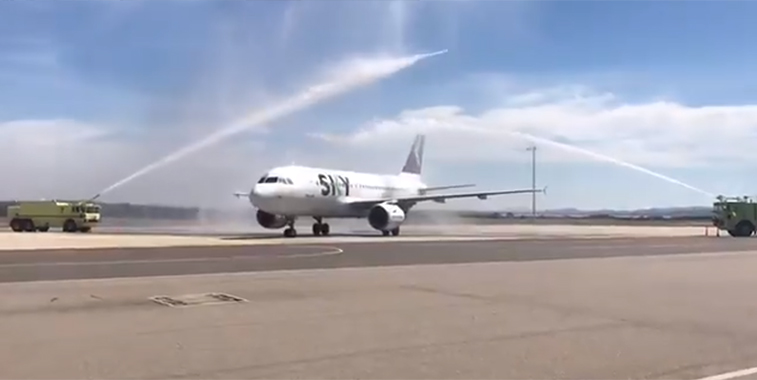 Is that a soft focus lens on this FTWA??

Judges’ comments: This is only the second FTWA we have had from Punta del Este in Uruguay. That FTWA was in December last year…and scored 21.7. This December the airport’s FTWA score has increased by 3.8 to 25.5. So in December next year we are predicting Punta del Este’s third FTWA and a score of 29.3…watch this space!! 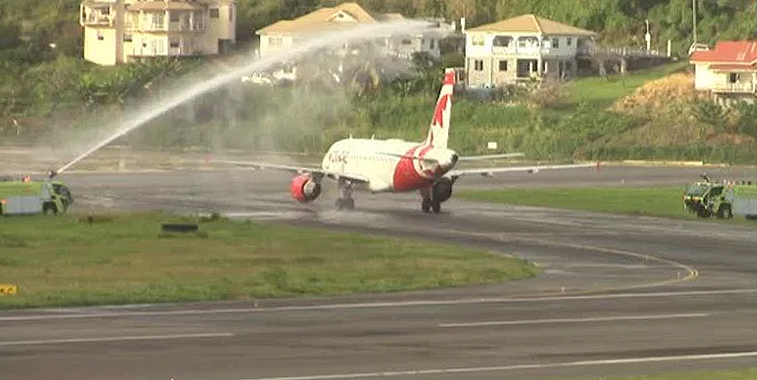 Was the right-hand tender too early or too late to provide the other half of this FTWA??

Judges’ comments: Up until this week, we had only had three FTWAs from the Caribbean, in the 47 weeks of this year’s Arch of Triumph. In Week 48 we get two from the region, which means it has now provided us with just 1.3% of the near-400 FTWAs we have received so far. Hopefully more entries from this part of the world next year… 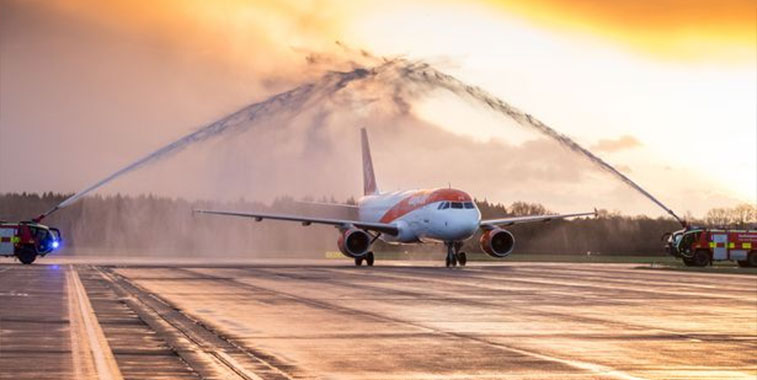 An Eddie ‘The Eagle’ Edwards FTWA…

Judges’ comments: For those of you that don’t know (and that’s pretty much everyone outside of the UK) Eddie ‘The Eagle’ Edwards is an iconic British skier and sporting hero who is best known for winning over the hearts of millions despite finishing last in the 1988 Winter Olympics ski jump competition. He was present for this route launch in Southampton…and looking at his FTWA score…he isn’t going to finish last this time!! 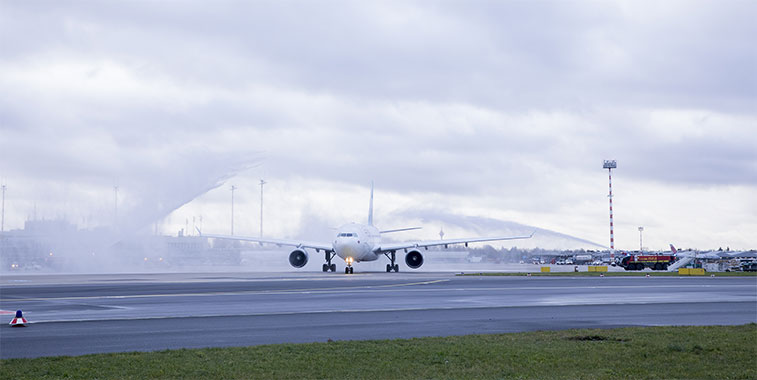 Judges’ comments: While Mother Nature appears to have effected the right-hand side of this FTWA, the left-hand tender looks to have tried to mitigate the impact of the wind by reducing the height of that half water arch…the result…a bit of mess…and not the normal German precision we have come to expect in this competition… 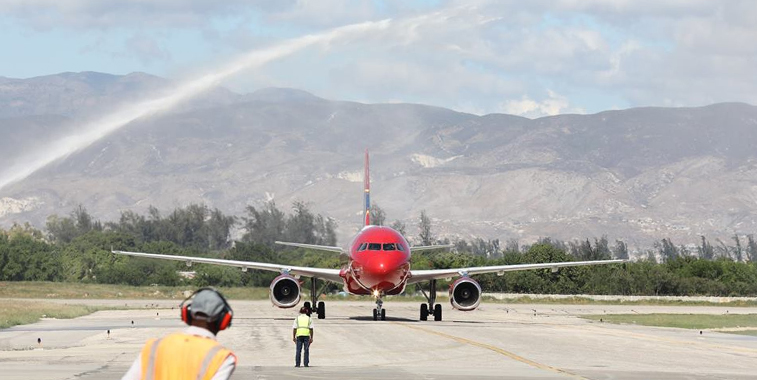 Why has this scored lower than the Air Canada Rouge FTWA? It’s all explained below…

Judges’ comments: You could argue that this FTWA is very similar to that produced for the Air Canada Rouge route launch above – i.e. only 50% of it seems to exist! Yet this one has scored significantly less (16.1 versus 19.8). However, in this one there are no tenders on display – so it loses points – plus there are two apron staff in shot!! Get out of the way guys!! Jeeeeeeeeez… 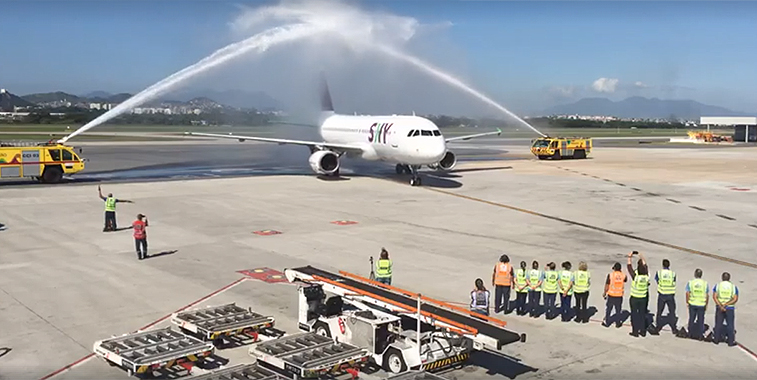 Is that the welcoming committee on the apron…?

Judges’ comments: You can almost hear the head of the operations team (orange hi-viz jacket, left-hand end of the line-up) for this inaugural flight saying to the welcoming committee/VIPs/marketing staff (all those to his right)…”You are fine just there…but don’t step over the red and white line!!”

Judges’ comments: The perfect angle for an FTWA (depending on the size of aircraft and the tenders distance from it) is somewhere in between 42 and 47 degrees. While the right-hand tender is somewhere in that sweet spot…their colleagues on the other side have gone for 78 degrees…its is somewhat reminiscent of Dufourspitze, which at 4,634m is Switzerland’s tallest mountain… 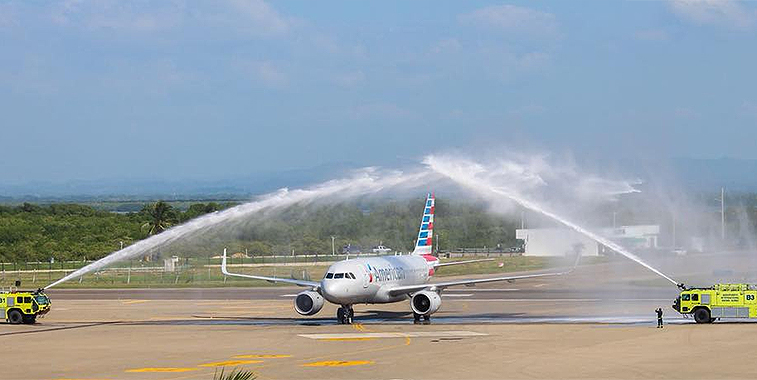 Colombian tenders getting up close and personal to the American A319…

Judges’ comments: Looks like the fire station at Cartagena Airport decided to send the B-Team for this water arch…as we can see fire tenders B1 and B3 on duty. The questions remains…if they had sent in the A-Team would the Arch of Triumph scored higher? Or would they have never got B.A. Baracas near the aircraft…”Ain’t going on no plane fool…” 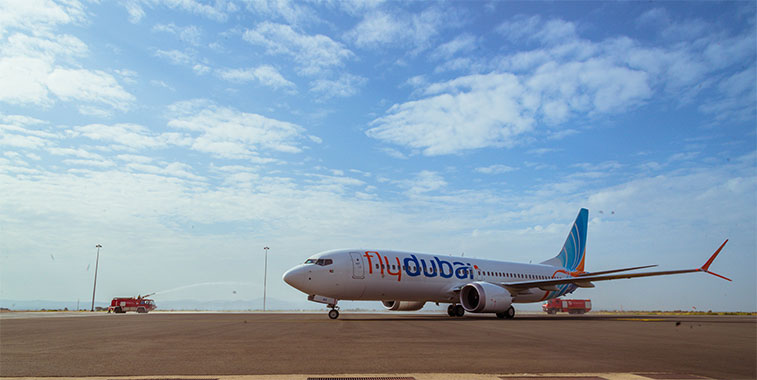 Judges’ comments: Maybe the firefighters at Kilimanjaro were in awe of the shiny new 737 MAX 8 which was used by flydubai on its inaugural service from Dubai….and this put them off their Arch of Triumph attempt? The anna.aero judges are pretty sure that this is about as far an aircraft has been from the water it is meant to be passing under that any of us have ever seen in five years of competition… 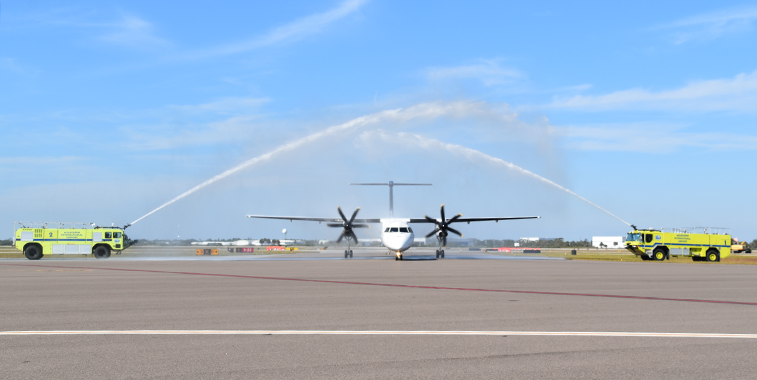 Is the right-hand tender falling into a sink hole??

Judges’ comments: This FTWA is not far off perfection. The left-hand tender has executed a brilliant angle for the water jet, with the effort being matched by that of the right-hand tender. However, either the truck on the right has experienced its rear tyres falling into a developing sink hole, or the topography of Orlando Melbourne’s airfield has denied the effort from getting that perfect horizontal symmetry… 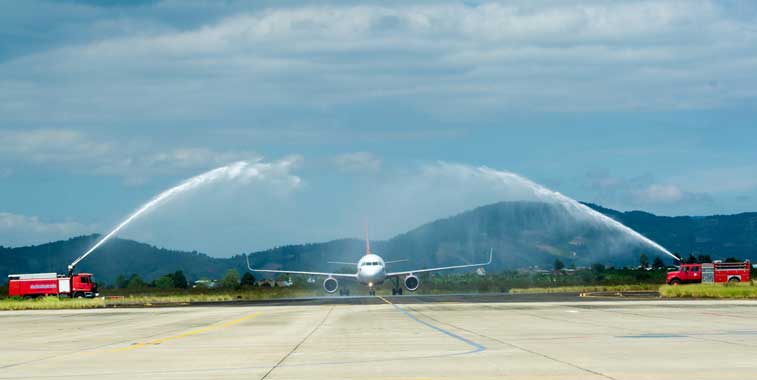 Judges’ comments: Now unfortunately sometimes the happy-ever-after scenario is never achieved, and this is a saying that can be said of FTWAs. The tenders at Da Lat could not be further apart to welcome Thai VietJet, and the result has caused quite the parting down the middle resulting in a major gap. Hopefully the same cannot be said for the personal relations of the Vietnamese airport’s firefighters.