Mexico City-Barcelona is “Skyscanner Unserved Route of the Week” with 540,000 searches; Aeromexico’s next Euro route after Amsterdam? 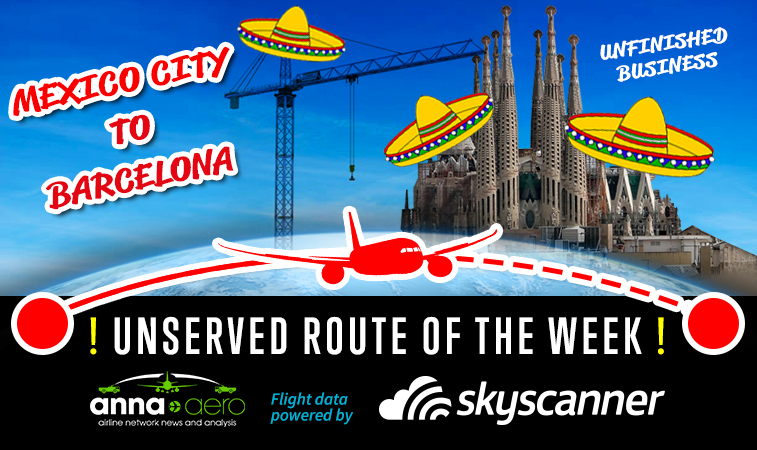 Like Gaudi’s Sagrada Familia Cathedral in Barcelona, there could be some unfinished business when it comes to direct air services between the Catalonian capital and Mexico. Skyscanner data shows that there were over 540,000 searches in the last 12 months for flights between Barcelona and Mexico City. anna.aero thinks that Aeromexico or LEVEL should consider adding a link between the two Spanish-speaking cities.

With over 540,000 searches in the last 12 months, a potential city pair from Mexico City to Barcelona has been identified as this week’s “Skyscanner-anna.aero Unserved Route of Week” – a powerful analysis based on aspirational data captured from the Skyscanner.net flight comparison site used by +60 million unique visitors per month. 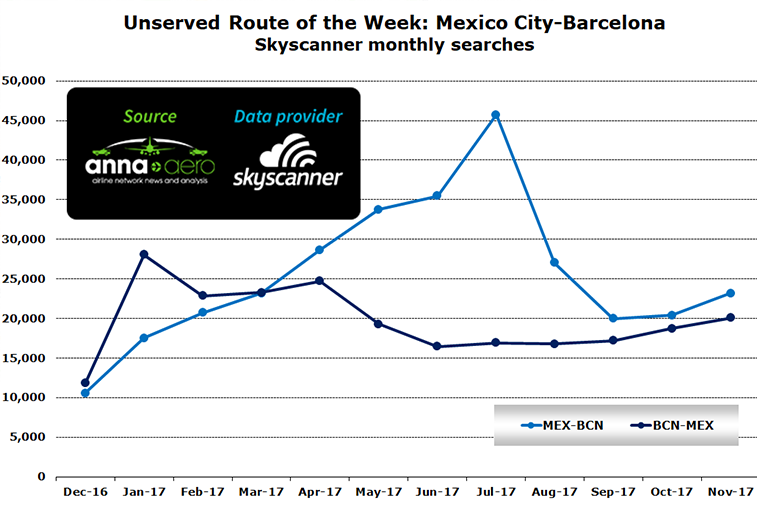 anna.aero thinks Aeromexico or LEVEL should leap onto this link

Skyscanner demand on this week’s unserved route shows a slight preference towards the Mexico City end of the city pair, with a 56/54 split, so on this basis we looked at potential carriers at the Mexican origin first. According to OAG schedules for the week commencing 19 December, the largest carrier at Mexico City is Aeromexico (40% share of weekly seats). The airline’s 84-destination non-stop route network from the Mexican capital presently consists of four European destinations, including Madrid (eight times weekly), Paris CDG (daily), Amsterdam (daily) and London Heathrow (six times weekly). It has been some time since the SkyTeam carrier added any fresh capacity to Europe, with its Amsterdam service being the last, which it launched in May 2016. That said, despite the vast majority of the airline’s international growth being focused on the US and Canada markets, it did launch an intercontinental sector in July this year, adding a four times weekly operation to Seoul Incheon, so it would seem that a potential long-haul route to Barcelona would not entirely be out of the question for Aeromexico.

Behind Aeromexico there is a proliferation of low-cost carriers at Mexico City – Interjet (21% share of seats), Volaris (13%) and VivaAerobus (7.7%) – none of which has the equipment or the market strategy at this point to consider a new low-cost long-haul (LCLH) route to Barcelona. On this basis the country’s flag carrier is the most likely to consider a new route to Spain’s second busiest airport given this compelling Skyscanner data. 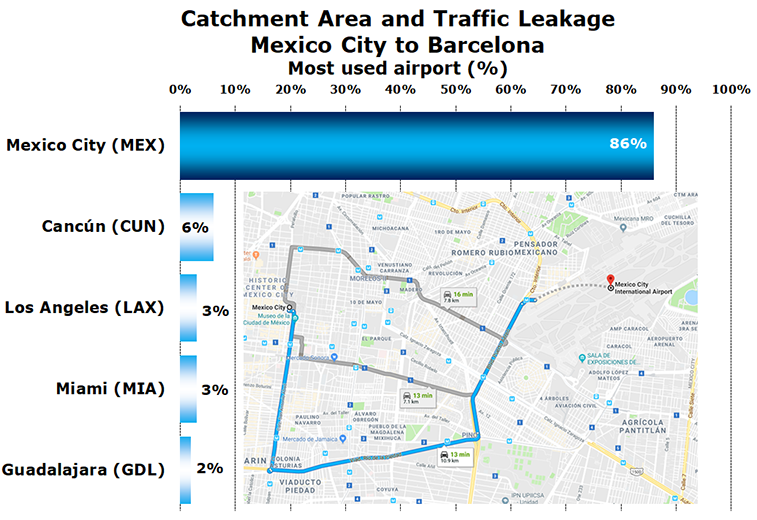 Matt Williamson Skyscanner’s Commercial Executive says: “Mexico City serves 86% of the catchment (50 km around the airport) going to Barcelona. With better service, such as a non-stop operation, the traffic could grow by 17%.”

Contemplating the Spanish end of the route, the airport’s #1 capacity provider of its current 66 serving airlines is Vueling, which offers 38% of weekly seats. With fellow LCCs Ryanair (13% share of seats) and easyJet (6.5% share) taking up second and third spots at Barcelona, the situation at the destination end of this route is similar to that experienced at Mexico City – incorrect equipment and business strategy for any of these airlines to consider this city pair at this time. The first carrier which may consider a link to Mexico City is LEVEL, which shares the IB code with its parent Iberia, to become the airport’s fourth largest operator in terms of weekly seats. Already offering flights to Buenos Aires Ezeiza, Oakland and Punta Cana from Barcelona, and with Boston to come in March next year, the LCLH it is well-positioned to offer Mexico City as its next service. Its LCLH arch rival at Barcelona, Norwegian, may also be very interested in the 540,000 Skyscanner travellers which want to fly to/from Mexico City, as it already offers routes to Los Angeles, New York Newark, Fort Lauderdale and Oakland and is yet to announce any further new sectors from the Spanish airport for S18.

When looking at the previous year of search data, the busiest month for potential traffic flows (for both directions on the route combined) is July 2017, with nearly 63,000 searches, around 40,000 higher than the lowest monthly figure, which was recorded in December 2016 (22,000 searches). The seasonality profile of this search data is less extreme than last week’s Unserved Route of the Week (Cardiff to Naples) with the low-month traffic representing just 36% of the highest month. According to OAG Traffic Analyser, because there is no direct service, the top three connecting options chosen by those passengers who did book travel between Mexico City and Barcelona in the last 12 months (year ending October 2017) indicates that the majority of connecting travellers used Madrid (38%), Paris CDG (15%) and Amsterdam (7.9%). In total 27 different airports were used by transit and transfer travellers to fly between the two cities.

Indeed, an O&D market that is not served by a non-stop flight will typically display a low purchase rate and low traffic. In this instance Skyscanner’s Travel Insight indicates a monthly average of 6.9% for the Mexico City to Barcelona route (see graph below). Therefore, if there was a Mexico City to Barcelona route, and if bookings performed in line with the “Skyscanner market average” for direct services at both airports (7.6%), the airline operating this route could immediately expect an improved purchase rate of 10%, without any increased marketing spend. However, with 540,000 annual searches in the last year, a daily service should be immediately viable for the airline choosing to start this potential city pair. 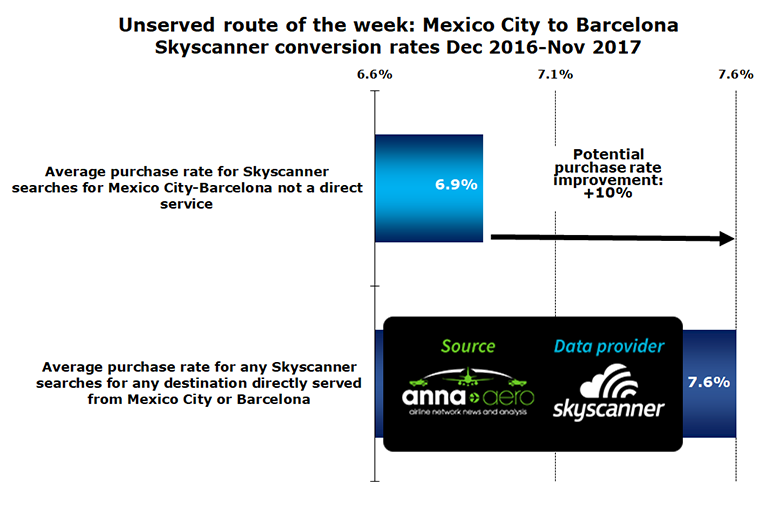