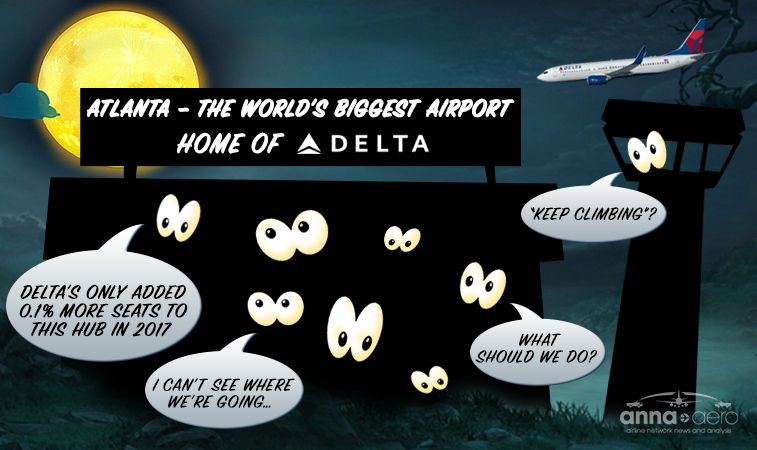 It’s not nice, or clever, to call people names, and ‘legacy carrier’ is particularly unkind. And while we analysts at anna.aero are not suggesting for one minute that we have the answers, there’s no getting away from the fact that growth of the US Big 3 carriers at their biggest hubs and airports isn’t really happening.

The last time that anna.aero analysed the American Airlines, Delta Air Lines and United Airlines, otherwise know as the USB3, we looked at which routes they had dropped for S16. This time our data elves have decided to look at the carriers in terms of the size of their hub operations, and which airports among the airlines’ leading facilities have seen the greatest gains (or losses) in 2017.

Among American’s leading airports, the operation which has seen the biggest cut during the past year is New York JFK, with it hacking its annual seat offering from the airport by 8.8% when compared to 2016. Of course a culling of such significance at a major hub must also have seen some route casualties, with some of those this year being flights to Birmingham and Manchester in the UK, San Juan in Puerto Rico and Tucson, Arizona. Another route to Europe will be chopped at the start of S18 – Zurich – with the carrier instead choosing to serve Zurich from its Philadelphia hub.

The news does not get better for the Big Apple, with the oneworld member also chopping its yearly seats from New York LaGuardia by 3.1%. In total it means that American has lost over half a million seats from its two New York hubs in 2017, or a 5.8% reduction of its seat availability. When it comes to American’s leading airports, eight of the top 12 have seen cuts in seats this year, the worst performing of the USB3. So bad is American’s performance, the airline has recorded an average drop in capacity from its top 12 airports in 2017 of nearly 68,000 seats each. It should be noted that only Charlotte Douglas, Chicago O’Hare, Dallas/Fort Worth, Los Angeles, Miami, JFK, LaGuardia, Philadelphia, Phoenix and Washington Reagan are technically American hubs, with Boston and Orlando (11th and 12th biggest airports for American) being just large airport operations. 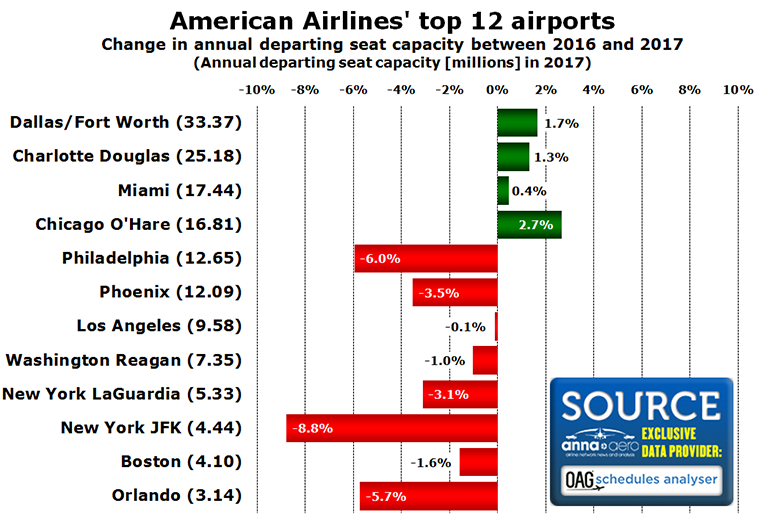 The airline’s leading hub is Dallas/Fort Worth, home to 33.37 million departing American seats in 2017, up 1.7% from the 32.83 million seats offered in 2016. Among new routes launched from Dallas/Fort Worth this year include Amsterdam and Rome Fiumicino in Europe, Rio de Janeiro Galeao in South America, plus Spokane in the domestic market. Overall though, American’s leading hub for growth is Chicago O’Hare, an airport where the airline has increased its departing seat capacity in 2017 by 2.7% (437,000 more seats in 2017 versus 2016). While most of the airline’s hubs have not fared well this year, some can be hopeful of a brighter outlook in 2018. For instance Philadelphia, along with a route to Zurich, will gain links to Budapest and Prague. Phoenix is seeing the addition of Amarillo and Oklahoma City, plus LaGuardia will see flights to Portland in Maine.

During the past 12 months, Atlanta has only experienced a 0.1% increase in departing seats from Atlanta, this compares to a 16% spike which was witnessed by the carrier at Boston, with the Massachusetts airport being the SkyTeam member’s leading hub for growth in 2017. Unlike American, which is posting an average loss of 68,000 annual departing seats at its key airports, Delta is at least on the positive side of the spectrum, reporting an average increase in annual one-way seats of just under 146,000 for each of the top 12 airports. 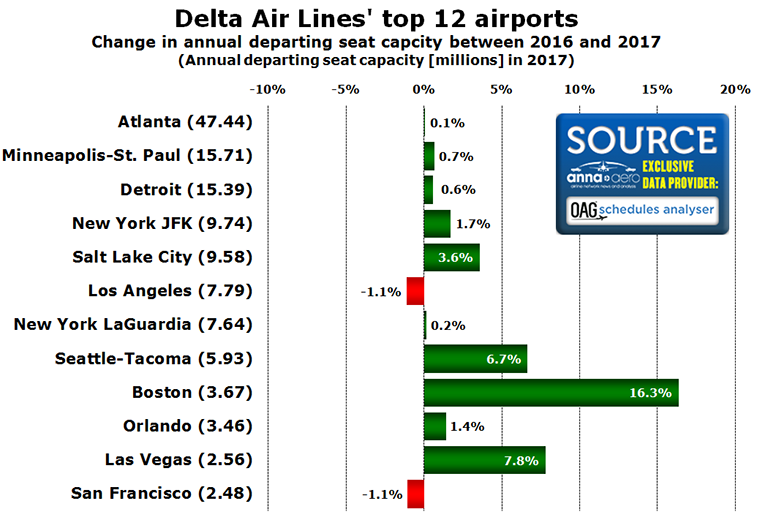 One hub of Delta’s which did not make it into the top 12 is Cincinnati (Delta’s 13th largest airport), an airport where the SkyTeam airline is offering 2.19 million one-way seats in 2017, an increase of 2.2% when compared to 2016. Another Delta hub which do not make its top 12 airports is Raleigh-Durham (14th) where the airline has increased in annual departing seat capacity this year by 5.2% to 2.17 million seats. The only airport in the top 12 which is not a hub for Delta is Las Vegas, where the airline has added 7.8% more seats in 2017.

United, unlike American and Delta, is growing much more evenly across its top airports, with its average growth rate from its top 12 airports in 2017 being 3.1%. Like Delta, United is reporting an average rise in annual seats across its top 12 airports, however the Star Alliance member’s result is nearly double that of its SkyTeam rival, boasting an average increase in annual departing seats among its top 12 airports of around 314,000. Its best airport for growth in 2017 is San Francisco, with the airline increasing its seat offering from the Californian hub by 7.8% this year (1.07 million departing seats). While San Francisco, along with a further eight of United’s top 12 airports are seeing growth, three are registering cuts (one more than the two posted at Delta), with one of these being the carrier’s second largest hub – Houston Intercontinental. The airline has cut around 37,000 departing seats from its main Texan airport this year. 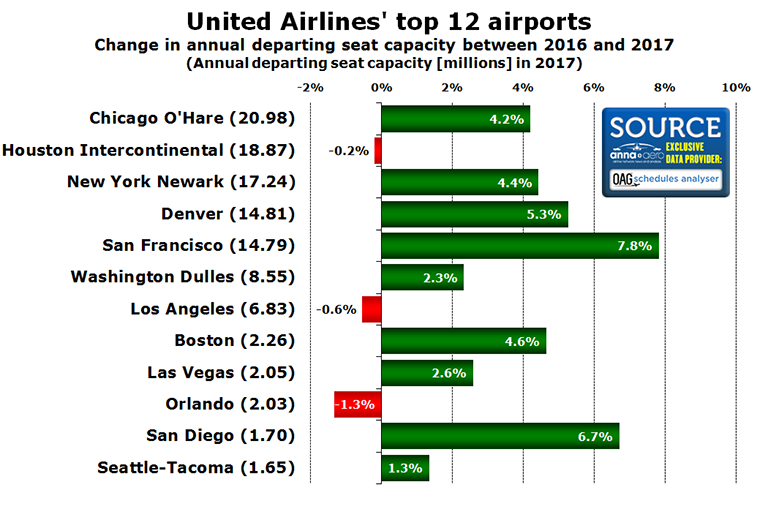 Of United’s top 12 airports, only O’Hare, Denver, Houston Intercontinental, Los Angeles, Newark, San Francisco and Dulles are hubs, with the biggest non-hub airport being Boston which observed a 4.6% increase in departing seats from the Star Alliance member this year. The capacity growth currently looks set to continue for United from a number of its hubs in 2018. O’Hare looks set to gain links to El Paso, Fresno and Wilmington according to OAG schedules, while on the other hand, Houston Intercontinental is set to see service to Sydney. Newark will be connected to Reykjavik/Keflavik and Porto, new destinations for the carrier, along with a domestic route to Elmira. San Francisco will become connected to Zurich and Papeete in Tahiti, while Dulles will wtiness the arrival of Edinburgh, Lewisburg, Shenandoah Valley and Wilmington. However, it is Denver which looks set to be the leader for new routes in 2018, gaining links to Jacksonville, Liberal, London Heathrow, Moab, North Platte, Scottsbluff and Vernal. 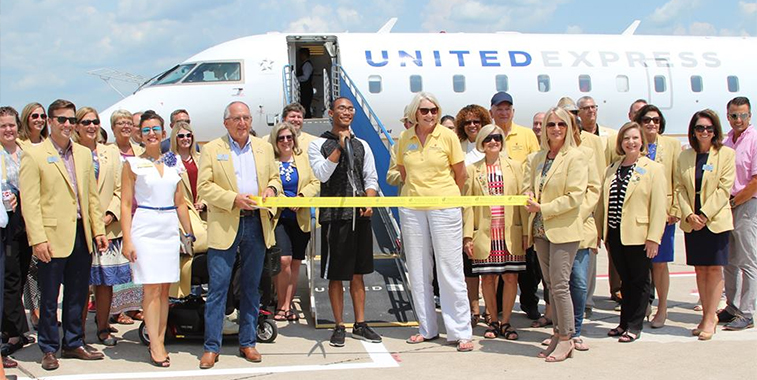 One route that United Airlines launched from its largest hub – Chicago O’Hare – this year was Columbia in Missouri. In 2017 the Star Alliance member increased its departing seat offering from O’Hare by 4.2%, with the airline’s top 12 airports recording an average increase in annual departing seats in 2017 of 314,000 each, twice as much as Delta Air Lines.