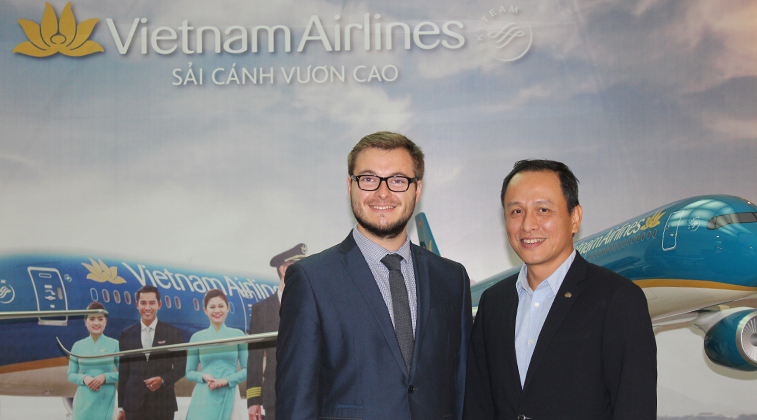 anna.aero’s Assistant Editor Jonathan Ford was kindly invited by Vietnam Airlines to its headquarters in Hanoi to meet with the carrier’s EVP Le Hong Ha. “We are currently looking at the opportunity to serve the US market in 2019, however with the flight time being over 16 hours, a route to Los Angeles for example is very far. We are evaluating the possibility of a one-stop service via the likes of Osaka Kansai or Seoul Incheon, with a Japan stop being the preferred option.”

Vietnam Airlines recently welcomed anna.aero to its Hanoi headquarters where Assistant Editor Jonathan Ford met with the airline’s EVP Le Hong Ha. The SkyTeam member, which joined the alliance in 2010, is the national carrier of Vietnam. It currently has a fleet of 92 aircraft according to a fact sheet given to anna.aero by the carrier, with the airline operating some 90 routes to 49 scheduled destinations, of which 20 are domestic and 29 international. The airline also operates multiple charter flights throughout the year. Before getting into deep conversation with Ha about the airline’s future plans with regards to its network and fleet growth, there was time for a brief summary of the carrier’s development over the past few years.

“We expect to carry around 21.5 million passengers this year,” comments Ha to anna.aero. When referring to OAG schedules, the SkyTeam carrier is scheduled to operate 28.05 million seats in 2017, putting the carrier at an average load factor of around 77% for the year. “In 2018 we plan to grow by roughly 10%, and this growth will be balanced across both the domestic and international network,” Ha informs. The growth of the airline in recent years has been impressive, with the carrier nearly three times larger than it was in 2007 in terms of available annual capacity. 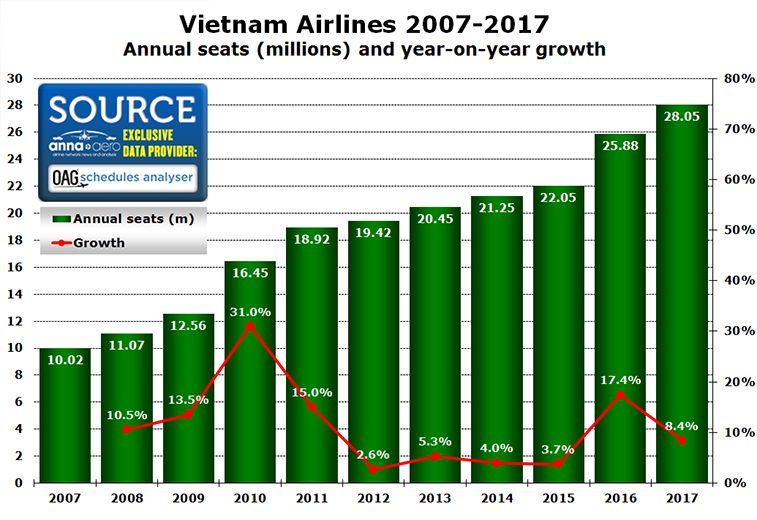 “Vietnam Airlines has reached the milestone of 200 million passengers on 1.6 million flights in just over two decades. This achievement is without doubt a solid testament to the trust, confidence and support from the airline community and our valued customers, both domestic and international,” comments Ha on the airline’s achievement of reaching 200 million passengers in December.

Vietnam Airlines’ largest airport operations are its main bases of Ho Chi Minh City and Hanoi. Both have seen steady growth in 2017, with the SkyTeam member’s seat offering from the former growing by 7.2%, while it has grown by over 11% from the Vietnamese capital. Currently Vietnam Airlines is offering around one million more one-way seats per annum from Ho Chi Minh City when compared to Hanoi, however the lead that the southern city has over the capital’s airport has dropped from a gap of 1.19 million departing seats in 2016. Of the carrier’s top 12 airports, five (highlighted in light green) are international. 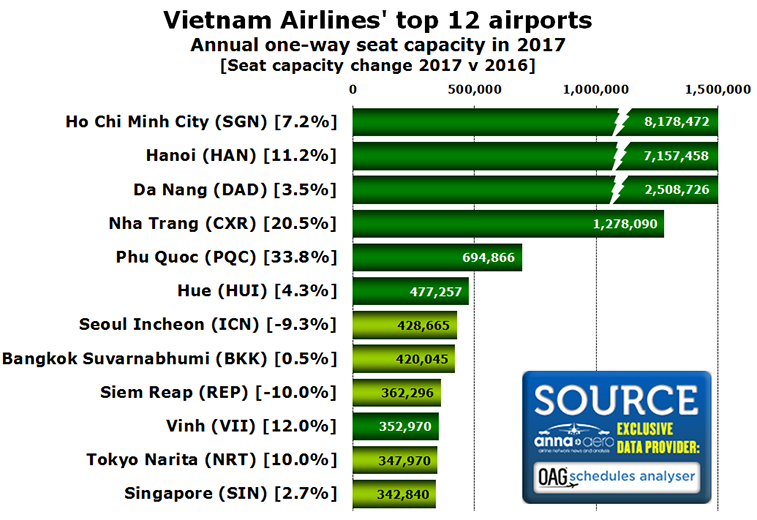 Sydney and Chengdu are among the new airports added to the airline’s network this year, with a wealth of routes also seeing increases in capacity. With the healthy increase in capacity in recent years, strong growth at its leading airports, plus more capacity expected next year, anna.aero’s conversation with Vietnam Airlines moved deeper into the future plans for its network and operation.

Will look to Berlin when new airport finally opens; US under consideration

When quizzed by anna.aero about the new markets that the carrier is looking at, particularly in the long-haul sector, Ha told Ford that one market in Europe that the airline is keen to open up is Berlin: “The German market to Vietnam is growing fast, and we had plans to open a route to Berlin once the airport opened in 2012, but this never occurred. As a result we added the capacity to Frankfurt, but if and when the new Berlin airport finally opens, we will once again plan to add it to the network.”

While the carrier has confirmed that it is looking to serve Berlin, that does not mean the end of its European potential. “We operate a joint effort with Air France to help and drive traffic through Paris CDG,” comments Ha. “The issue we have is wanting to attract the higher-yield customer. At the moment most of the traffic that we serve to/from Europe is leisure, but what we want to do is to increase the traffic mix in order to increase yields. We want to get more business traffic onto our services from Europe, particularly from Paris CDG connections. Once we have improved the traffic mix and increased yields, we would study more route opportunities to Europe.” Ha also commented to Ford that one factor which is hindering a push to Europe is the lower fares bring provided to Vietnam from the MEB3. “We just cannot compete with the fares they’re offering via their hubs in the Middle East. They, along with Turkish Airlines, are on a competitive strategy. They’re the masters of low fares.”

While opportunities to Europe at the moment are minimal, an area of interest for the airline is the US, with Ha telling Ford that a US service could be operating in 2019. “We are currently looking at the opportunity to serve the US market in 2019, however with the flight time being over 16 hours, a route to Los Angeles for example is very far. We are evaluating the possibility of a one-stop service via the likes of Osaka Kansai or Seoul Incheon, with a Japan stop being the preferred option.” Taking a closer look at OAG Traffic Analyser data, an estimated 1.21 million passengers travelled between Vietnam and the US in 2016, surely making it one of the largest unserved country markets in the world, a statement that was reiterated by Ha. OAG Traffic Analyser data also shows that the market is a fast growing one, with indirect traffic between the two nations growing 32% since 2013. Ha commented to anna.aero that Los Angeles was the most likely destination in the US for the new service. More details of the airline’s US plans will become available in the coming months.

Ha also commented on the airline’s thoughts for the future, including its potential next aircraft order. “The only way that we are able to add capacity to existing destinations is by using larger aircraft, as most airports that we now operate to are slot constrained,” adds Ha. “We are going to see 787-10s join the fleet from 2019, with more A350s coming over the next few years.” But even with the additional wide-body units joining the fleet, the carrier is looking into making another decision for its future fleet in the coming year.  Ha tells anna.aero that the airline is mulling the potential of purchasing the 777X, however it is unclear as yet which model of the X the carrier will opt for. 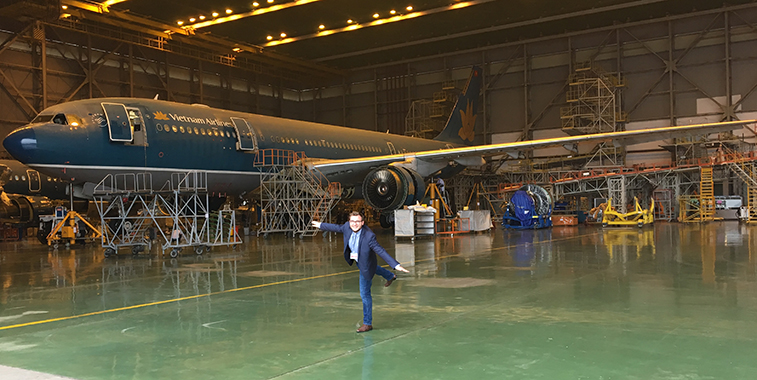 While in Hanoi, anna.aero’s Jonathan Ford got a chance to visit Vietnam Airlines’ MRO centre at the airport, where inside the hangar was one of the carrier’s A330s. “Most of our Airbus maintenance takes place in Hanoi, while the Boeing aircraft maintenance is centred around our Ho Chi Minh City station,” comments Mai Tuan Anh, CEO of Vietnam Airlines Engineering Company (VAECO) to Ford during a brief meeting on the morning of anna.aero’s visit to the hangar.