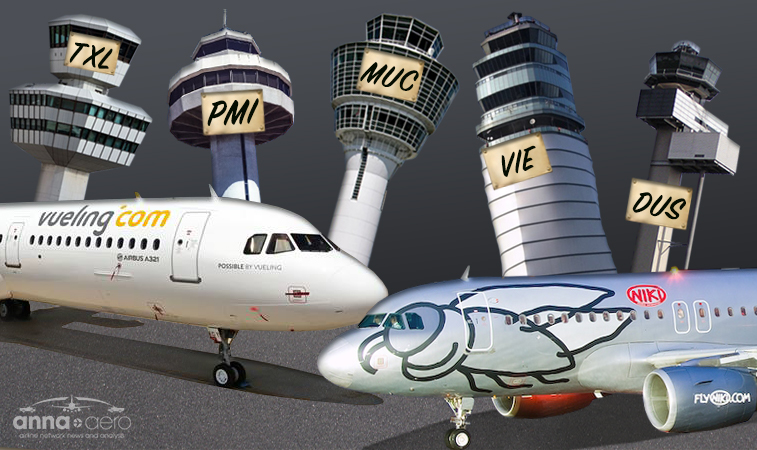 In December IAG purchased NIKI in a deal worth up to €36.5 million that will see the group take charge of the Austrian airline’s 15 A321s and additional traffic rights at airports including Berlin Tegel, Düsseldorf, Munich, Vienna and Palma de Mallorca. The group has stated that the assets will be used to help grow Vueling’s brand in Austria, Germany and Switzerland, however strong competition from Eurowings and easyJet will make it a tough battle in the LCC market.

NIKI suspended flight operations on 14 December after 14 years of flying. Launched in 2003, it announced a cooperation with airberlin in 2004, before completely merging with the German carrier in 2011, with it sharing operations, booking systems and aircraft with airberlin. With airberlin folding in October, it was unsure what was going to happen to NIKI. Lufthansa showed interest in the airline as part of its discussions to acquire airberlin, however these talks never came to fruition. This left the door wide open for IAG to come to an agreement to purchase the Austrian airline for €20 million at the end of December, giving the airline group access to 15 A321s and additional traffic rights at Berlin Tegel, Düsseldorf, Munich, Vienna, Zurich and Palma de Mallorca. A further €16.5 million is to be used to shore up its capital reserves.

Palma de Mallorca is by far NIKI’s largest airport, with the Balearic island being home to around 28% of the airline’s departing seat capacity in 2017. This should come as no surprise, given the popularity of the Spanish market for the airline, with the nation accounting for 40% of its departing seat capacity in 2017, ahead of Germany (38% of departing seats in 2017), its home market of Austria (6.7%) and Switzerland (5.5%). Along with Palma de Mallorca, Malaga and Gran Canaria (all highlighted in light green) are also in Spain and make it into NIKI’s top 12 airports. In total the airline’s leading airports accounted for 72% of its departing seats last year. 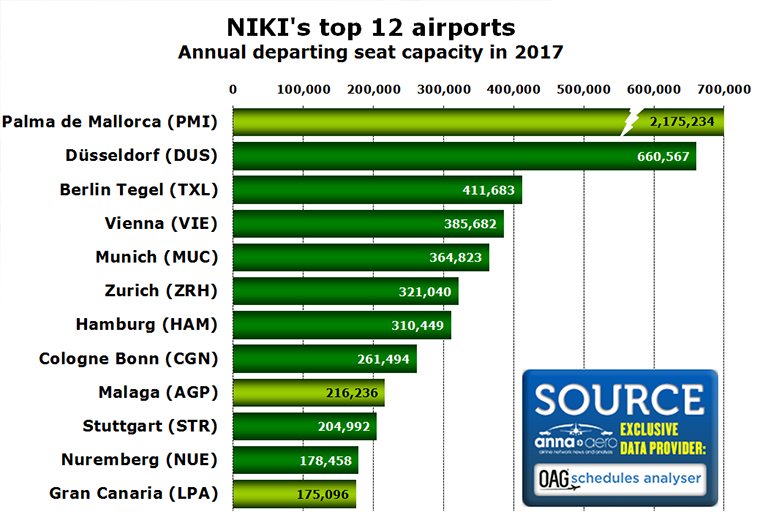 In the first 11 months of 2017, NIKI flew just over five million passengers to/from Spain according to statistics published by Aena, giving the carrier a theoretical load factor of just under 85% when referencing the Spanish airport operator’s numbers against OAG schedules data. Of those passengers, 3.58 million flew to/from Palma de Mallorca. During the same period of last year, Vueling flew 32.4 million passengers to/from Spain according to Aena information, with 2.08 million of those being Palma de Mallorca passengers. With the addition of NIKI’s traffic to that already generated by Vueling, the combined throughput for both could make it the largest airline at Palma de Mallorca, as NIKI between January and November carried just 400,000 passengers less than the airport’s number one carrier Ryanair. IAG has confirmed that more details about the new subsidiary’s branding and route network will be provided in due course, but given the power of Palma de Mallorca and the slots which IAG will gain at the airport, it will be a surprise if the destination is not a major part of the network, even if the main focus of the acquisition is to grow Vueling’s brand in Austria, Germany and Switzerland.

The perfect fit for Vueling’s existing presence in region

An examination of Vueling’s top airports in Austria, Germany and Switzerland shows that NIKI’s current network fits perfectly into the Spanish LCC’s existing operation to the region, with eight of the 11 airports Vueling operates to in the three countries being part of NIKI’s top 12 destinations (all highlighted in light green). The only airport’s not appearing in NIKI’s top 12 are Geneva, Basel and Hannover, but the latter two were still part of the carrier’s network before flying stopped a few weeks ago. When referring to OAG schedules, NIKI did not operate from Geneva last year. 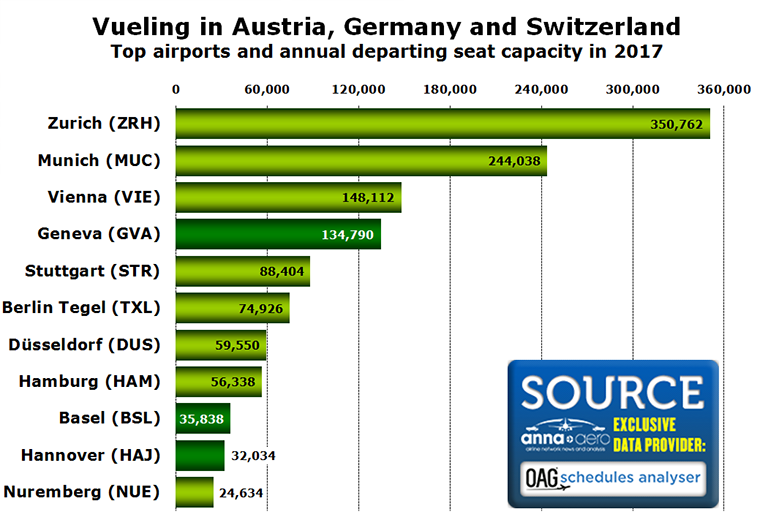 NIKI was the eighth largest airline operating in the German, Austrian and Swiss region in 2017 (excluding airberlin), sitting just behind Condor but ahead of British Airways. The purchase of NIKI would propel Vueling, which current sits as the nations’ 22nd largest operator, to being the region’s seventh biggest airline, sitting just behind Ryanair. “NIKI was the most financially viable part of airberlin and its focus on leisure travel means it’s a great fit with Vueling,” commented IAG CEO Willie Walsh on the NIKI purchase.“This deal will enable Vueling to increase its presence in Austria, Germany and Switzerland and provide the region’s consumers with more choice of low-cost air travel.” The newly-formed subsidiary of Vueling will be incorporated as an Austrian company and run as a separate operation to begin with. It is still subject to customary closing conditions such as European Commission competition approval.

Will be hard to keep up with Eurowings and easyJet

While this deal does allow for a major capacity increase to expand Vueling’s brand awareness and operation in the region, the new venture would still be dwarfed by LCCs Eurowings (second largest airline in Austria, Germany and Switzerland – 21.16 million one-way seats in 2017) and easyJet (fourth – 12.69 million). Both have also been expanding rapidly in the region during recent months. easyJet purchased part of airberlin’s assets for €40 million to create its own Berlin Tegel operation which begins operations this week. The UK airline has also established an Austrian AOC to allow it to continue inter-European flying post Brexit. IAG also plans to operate its new Vueling unit under an Austrian AOC. Eurowings has added capacity to its Vienna and Salzburg operations during the past 12 months, along with its many bases in Germany which coincidentally appear in NIKI’s top 12 airports, including its new Munich operation. Not only that, but Eurowings has also opened a base at Palma de Mallorca, NIKI’s number one airport. So IAG will have to work hard to crack the market with its new operation, particularly given the negativity around the airberlin brand in recent years. Nonetheless, a further advantage that this deal gives IAG, and indeed oneworld, is an improved foothold in the Star Alliance’s backyard, in a three country market currently dominated by Lufthansa, SWISS, Austrian and Eurowings. 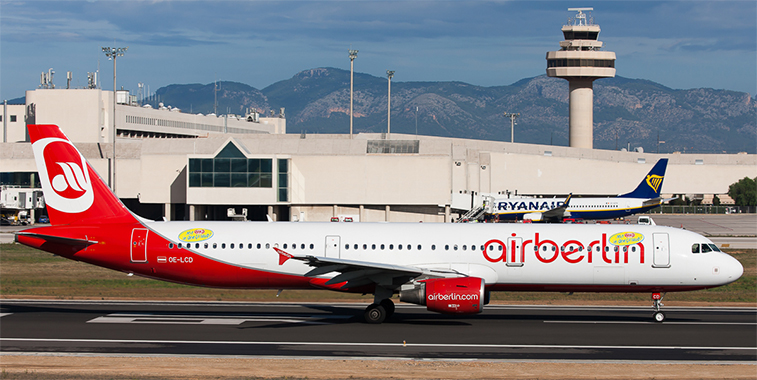 OE-LCD is one of 15 321s that will be taken over by IAG as part of its purchase of NIKI to help expand its Vueling brand in Germany, Austria and Switzerland, with it seen here on take-off from Palma de Mallorca, NIKI’s largest airport. Currently the airline is the second-largest operator at the airport in terms of passengers carried, with it sitting behind Ryanair. However, with NIKI’s incorporation into Vueling, the Spanish LCC looks set to become the Balearic island’s largest carrier.