easyJet is averaging 60 daily departures more than the second largest airline at Europe’s leading ski airports; Salzburg’s the most peaky 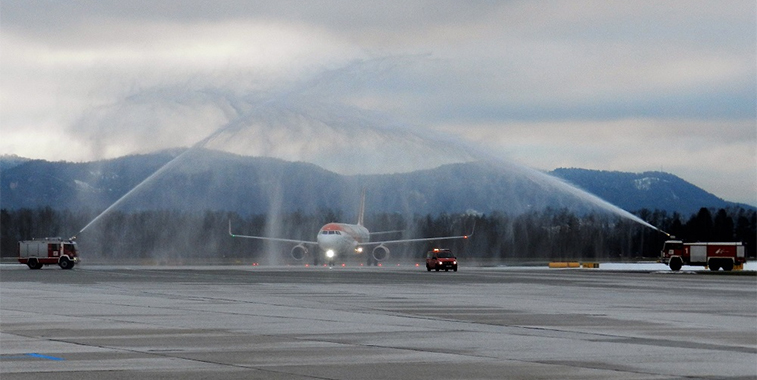 easyJet launched flights to Klagenfurt in Austria from London Gatwick in December, its latest ski destination from the London airport, with the Austrian city greeting its newest carrier with a splendid water arch salute. The UK carrier is by far the leading airline operating to the ski airports analysed in this article (Geneva, Lyon, Chambery, Grenoble, Salzburg, Innsbruck, Sofia, Turin and Verona), with it operating on average 60 more daily flights than second placed carrier HOP! The only airport analysed which easyJet does not operate to is Chambery in France.

The W17/18 ski season is now well under way in Europe, with the focus of the skiing period taking place predominately between mid-December and April (depending on snow conditions). With many soon to head off to the slopes, anna.aero’s data elves were keen to investigate some of Europe’s major ski airports to get an idea of the operational challenges that some will face when greeting the thousands of adrenaline-fuelled tourists that will be ready to hit the slopes. For this analysis, anna.aero has focused on the following leading ski airports: Geneva, Lyon, Chambery, Grenoble, Salzburg, Innsbruck, Sofia, Turin and Verona.

Needless to say, the trend of travellers over recent years has been to look for more interesting destinations to visit, and moving away from some of the more traditional locations. This is not just a summer season-only trend, but it has also been observed in the ski industry, with markets including Eastern Europe (around Bulgaria and Romania), plus niche destinations such as Northern Sweden, Slovenia, and even Cyprus becoming growing destinations for more adventurous skiers. This is a move that has clearly been perceived by easyJet, as it has launched some interesting new ski routes in recent seasons, including from London Gatwick to Ostersund in Sweden. It has also added niche markets in well-established ski markets like Austria and Germany, introducing smaller cities to its network such as Klagenfurt and Friedrichshafen respectively.

The two busiest airports among the nine analysed are Geneva and Lyon. In early December, the number of scheduled flights on a Saturday (2 December) is less than that observed on Mondays and Fridays, both considered the busiest days of the week for most airports. But thereafter, Saturday becomes the busiest day of the week at Geneva, especially after the turn of the year, with Sunday becoming the second busiest day. At Lyon, by mid-January its daily movement picture returns to the same profile it was in early December, with Mondays and Fridays being its busiest days of operation. However it should be noted that the number of daily flights from the French airport appears to be less in January than it is in December, with the average daily departures down by two from 128 in December to 126. For Geneva, the average number of takeoffs increases by eight from 192 last month to 200 in January. 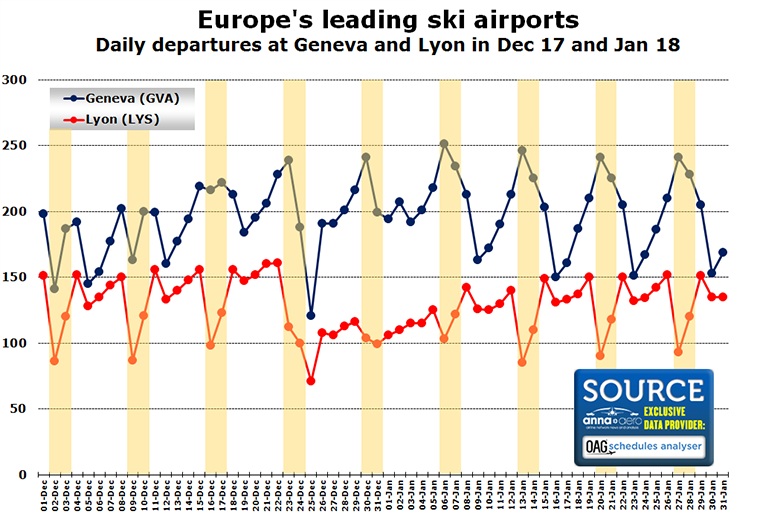 Austria’s the most significant ‘peaker’

Salzburg is by far the most peaky of the airports analysed, with it seeing Saturday flights increase from 20 per day in early December to over 70 in early January. Friday and Sunday flights also see an increase, but to no more than around 30 flights per day. Due to the destination’s popularity with skiers, during January on Saturdays, the Austrian airport has more departures than Sofia Airport – the capital city of Bulgaria – an airport which handles close to five million more passengers a year than Salzburg. Other airports which observe sizable weekend peaks include Innsbruck, Verona, Grenoble and Chambery. The impact of winter ski flights are not so evident at Sofia and Turin. While most airports witness peaks on Saturdays, Sofia’s busiest day of operation during the period analysed is Friday, and for Turin its weekly peak during the ski season occurs on Sundays. 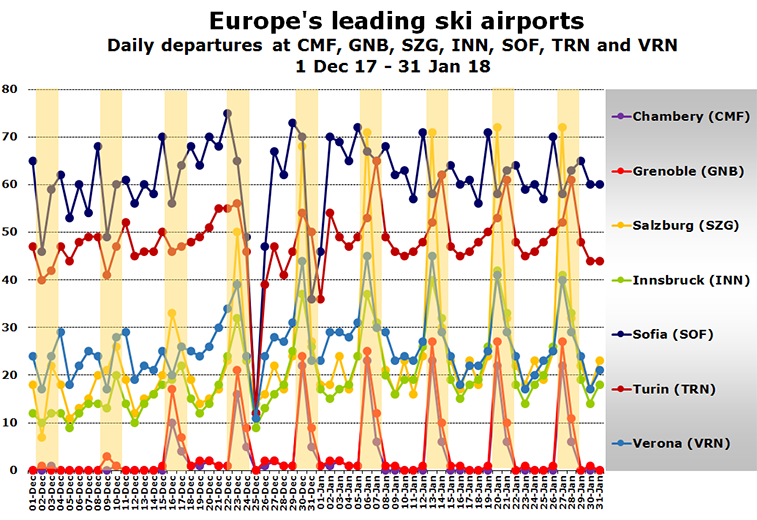 When anna.aero last performed a ski airport analysis back in 2014, one airport which was looked at in-depth was Cuneo in Italy, however the number of serving airlines and routes has dropped rapidly, with only Ryanair offering a three times weekly service from Cagliari this winter, with Royal Air Maroc and Ernest serving Casablanca and Tirana respectively.

easyJet’s slaloming past the rest

easyJet is by the leading carrier for the region, averaging 60 daily departures more than the region’s second most popular carrier HOP! (average of 106 daily departures versus 40). However, the Air France subsidiary goes against the trend of the region’s top airlines, with it seeing cuts in its flight frequency during the weekends, while others enhance their operations. This is of course due to the airline having a large presence at Lyon where it does a lot of regional, business market flying, meaning demand will be less at the weekends for its main clientele, although it may still carry some ski passengers. Of the airports analysed for this article, only Chambery is not served by easyJet. Most of the airline’s operations are from its base at Geneva. Looking at the 13 January for example, 91 (66%) of easyJet’s departures from the airports analysed takeoff from the Swiss base. 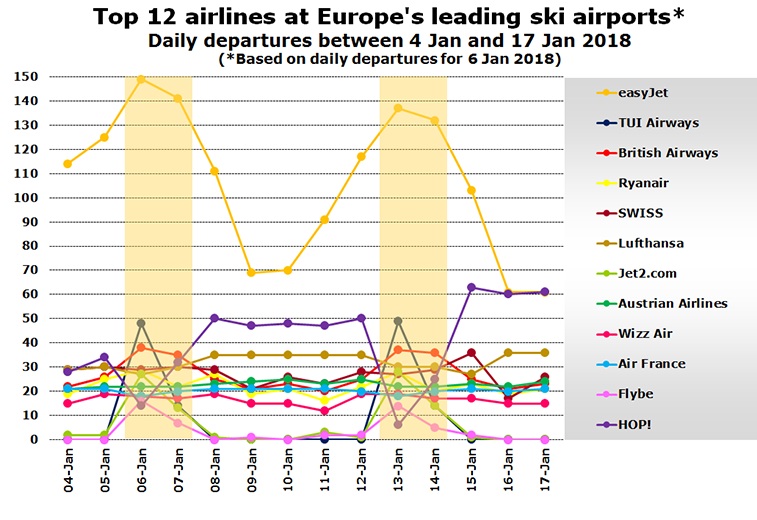 The most ski-heavy airline is TUI Airways, which is operating 63 flights to the Alps on the weekend of the 13 and 14 January (49 Saturday, 14 Sunday), but zero flights during mid-week. This is a similar pattern produced by other UK airlines including Flybe and Jet2.com, however they do at least both offer an average of one daily departure between 8 and 12 January (weekdays). The carriers which are showing the most level flight schedule from the airports analysed are Air France and Wizz Air, with both highlighting an average difference between their weekend and mid-week flight schedules of 0.5 daily departures. 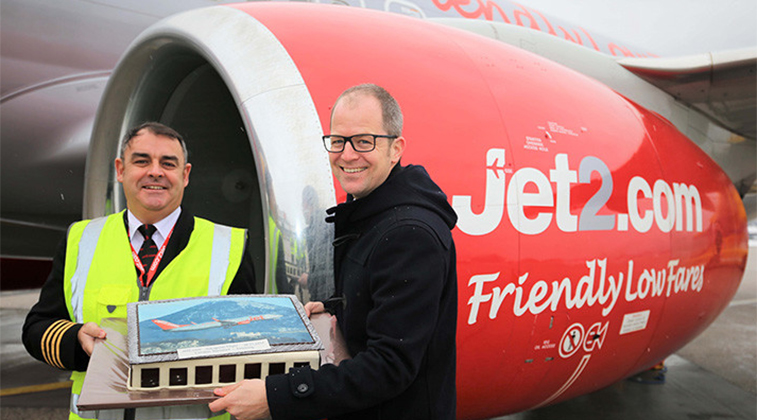 Seen welcoming Jet2.com’s inaugural flight from London Stansted to Salzburg back in November, greeting the captain with a cake inspired by the UK carrier, is Christopher Losmann, Divisional Manager Aviation at Salzburg Airport. Along with Stansted, the airline has also added Birmingham services to its Salzburg schedule this winter. According to a press release sent out by the Austrian airport, some 160,000 passengers have travelled with the airline to/from the UK since 2006, with this winter season marking Jet2.com’s 12th anniversary at Salzburg.