Georgian Airways is taking advantage of visa-free EU travel by planning a wealth of routes for S18 from Tbilisi; capacity grows by 47% in 2017 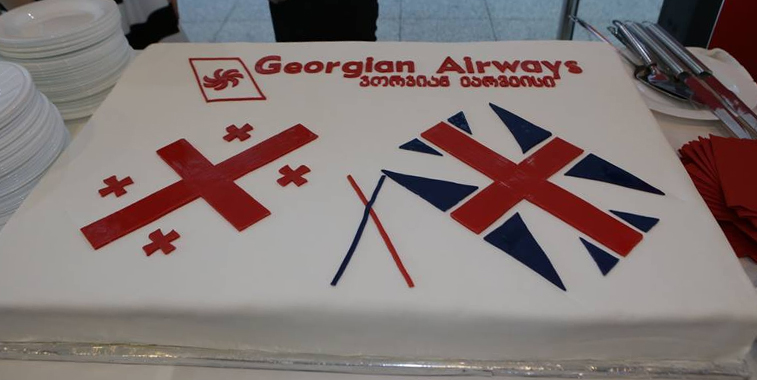 Georgian Airways baked this cake to toast the start of its first service between Tbilisi and London Gatwick back in May. From its launch until the end of November, the carrier, according to UK CAA statistics, flew just over 7,700 passengers on the route. It was not the only carrier to launch non-stop flights between Georgia and the UK last summer, with Wizz Air inaugurating a London Luton route a few weeks after the Georgian Airways first flight, with the ULCC carrying just under 10,200 passengers between up until 30 November.

Georgian Airways, formally known as Airzena before 2004, is an airline based in Tbilisi, the destination for CONNECT 2018. According to ch-aviation, the carrier currently operates a fleet of eight aircraft with an average age of just over 14 years. Its equipment is made up of following aircraft: three 737-700s, two E190s, one CRJ 200 and one CRJ 100, along with one Challenger 850 for VIP usage. As of 8 January, the airline is offering routes from Tbilisi to Amsterdam, Kiev Boryspil, London Gatwick, Moscow Vnukovo, Prague, St. Petersburg, Tel Aviv, Vienna and Yerevan, while a summer seasonal service to Batumi on the Black Sea coast of Georgia is also operated. However, the airline’s route count will be close to doubling in 2018 (more detail below).

Georgian Airways offered just under 625,000 seats in 2017, an increase of around 47% when compared to its offering of over 425,000 seats in 2016. It means that the carrier has had its largest operation in recent history last year, with it also being its best year for seat capacity growth during the past decade. As well as 2017, 2011 and 2015 (all highlighted in light green) also encountered double-digit capacity growth, however both years then witnessed cutbacks when referencing OAG schedules. Georgian Airways at present is poised to operate 50% more seats in S18 versus its S17 timetable, with 656,517 seats on offer for this year’s summer season. The result is 5.0% more than the total seats the airline operated in all of 2017, showing that significant growth is most certainly at the heart of its network strategy.

Using the same source, and despite the carrier’s rapid seat increase in 2017, Georgian Airways was still only the second largest airline in Georgia after Turkish Airlines, as the Star Alliance member offered just 600 more seats than Georgian Airways from the country last year. Some of the top connecting markets with Turkish Airlines from Tbilisi via Istanbul Atatürk included Ankara, London Heathrow, Barcelona and New York JFK when referencing OAG Traffic Analyser data. 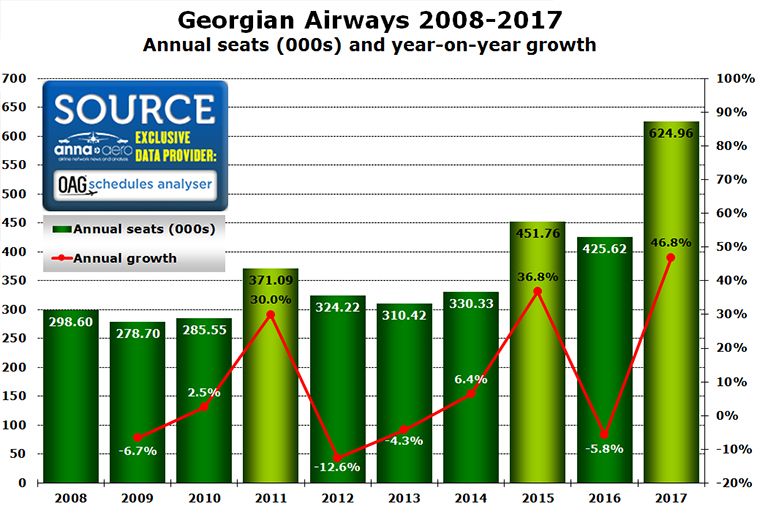 Last year Georgian Airways opened services from Tbilisi to Kiev Boryspil (launched in April), London Gatwick (May) and Prague (May). According to data published by the UK CAA, the route between Tbilisi and Gatwick since its launch up until 30 November carried 7,702 passengers. However, Georgian Airways was not the only airline to launch direct flights between its home market and the UK capital last year, with Wizz Air starting services from London Luton to Kutaisi in June. The route, again according to UK CAA data, transported 10,174 passengers from its launch until the end of November. Despite these new services, when analysing OAG traffic data, some 20,000 people still travelled indirectly between Tbilisi and London between May and November, with an extra 1,000 travelling to/from the UK capital from either Kutaisi and Batumi, showing that there is still demand for more services between Georgia and London. This is also given by the fact that Heathrow is one of Turkish Airlines’ leading connecting destinations from Tbilisi, Georgia’s number one airline in terms of seat capacity.

Eight new routes from Tbilisi for 2018

Georgian Airways is schedule to begin the following routes in the table below from Tbilisi at the start of S18. All sectors are currently planned to be flown on the airline’s fleet of 97-seat E190s. Currently none of the routes are served by other carriers, with no other companies currently expected to launch services on any of the city pairs in 2018.

In total, the markets which Georgian Airways will be entering in 2018 saw a combined estimated total of just under 92,000 passengers last year, making up approximately 3.1% of all passengers from Tbilisi in 2017. The three most popular unserved markets which the carrier will be entering in S18 are Paris CDG, Barcelona and Brussels. Apart from Kazan, the remaining seven routes scheduled to launch are all to cities within the EU. During the first nine months of 2017, EU visitors to Georgia increased by 25% according to statistics given to anna.aero by the Georgian National Tourism Administration (GNTA), with 263,600 EU citizens visiting the country between 1 January and 30 September. Since the lifting of visa requirements for travel between EU countries and Georgia, the number of visitors from the European block has bloomed, and this fact appears to have been a strong component in Georgian Airways’ network growth strategy. Another factor which has helped the carrier be able to shift its focus to European growth is due in part to the airline being given permission by the European Aviation Safety Agency (EASA) in 2016 to perform flights to 32 EASA member countries, which included the current 28 nations of the EU.

In 2016, Wizz Air opened a new base at Kutaisi, basing one A320 and opening new routes to Berlin Schönefeld, Memmingen, Larnaca, Sofia, Thessaloniki, Dortmund and Milan Malpensa. These services were then followed by a Luton route in S17, with Athens, Barcelona, Paris Beauvais, Prague, Riga, Rome Fiumicino and Wroclaw links will begin this summer. The new services will result in a second A320 being stationed in Georgia this summer. While not in direct competition, Kutaisi is a low-cost flight option for the citizens of Tbilisi, with Kutaisi Airport being a three-hour drive from the capital. Given that both airlines will be launching Barcelona and Paris services this summer, while Georgian Airways will also enter the Berlin market in 2018, it will be interesting to if both carriers can make the routes sustainable. Currently, as an example, Georgian Airways in May is offering one-way fares between Tbilisi and Barcelona for €350, while Wizz Air’s inaugural service on 18 May is currently showing a lowest fare of €126.

During the past few days, Georgian Airways in OAG schedules has filed routes from Yerevan in Armenia to Cologne Bonn and Lyon, with the latter currently not served, nor planned to be served, from Tbilisi. Both are planned to operate twice-weekly from mid-April, but as yet these routes are not available for booking on the carrier’s website, but instead bookable on Armenia Aircompany, a unit of Georgian Airways. Looking at MIDT data for 2017, some 7,800 passengers travelled indirectly between Yerevan and Lyon last year, while around 900 flew between the Armenian capital and Cologne Bonn. 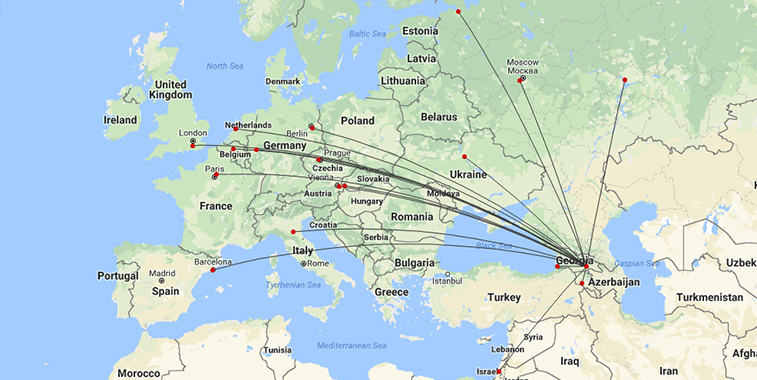 Georgian Airways will introduce eight new routes from Tbilisi in S18, namely Barcelona, Bologna, Bratislava, Brussels, Berlin Schönefeld, Cologne Bonn, Paris CDG and Kazan. In total, the carrier’s seat offering is scheduled to be 50% greater this summer than it was in S17, with 656,517 seats available for purchase in S18.