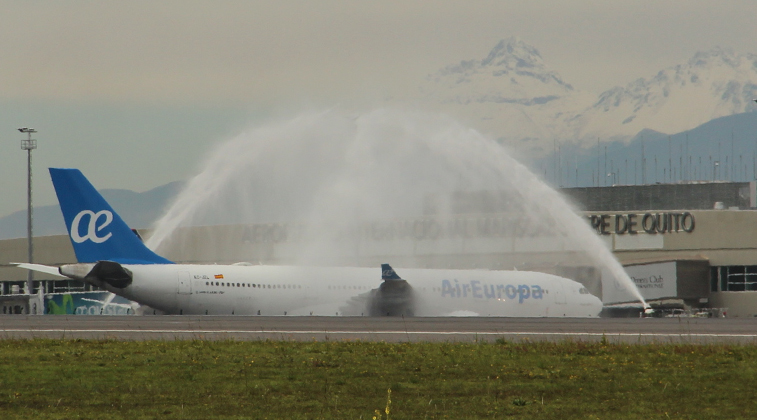 Quito Airport gained its second connection to Madrid on 2 January courtesy of Air Europa, with the airline joining Iberia on the route from the Spanish capital, with the first flight seen here getting a water arch salute on its arrival in the Ecuador capital. The route comes at a time when Quito has struggled to grow, with the airport processing 4.87 million passengers in 2016, down 9.4% on 2015’s total of 5.37 million. Data suggests that the airport will not have grown in 2017, with OAG schedules indicating that annual seat capacity fell between 10% and 11% last year.

Quito will be the gateway for around 800 airport and airline network planners next month, with the Ecuador capital being the venue for Routes Americas 2018, a conference hosted by Quiport and Quito Turismo. The city is home to a population of over 2.6 million people, making it Ecuador’s second largest after Guayaquil. Previously served by the old Mariscal Sucre International Airport which closed in 2013, the city’s new airport of the same name – Mariscal Sucre International – opened on 20 February that year, some 18 kilometres east of the city centre, with Ecuador’s capital airport handling around 4.87 million passengers in 2016. 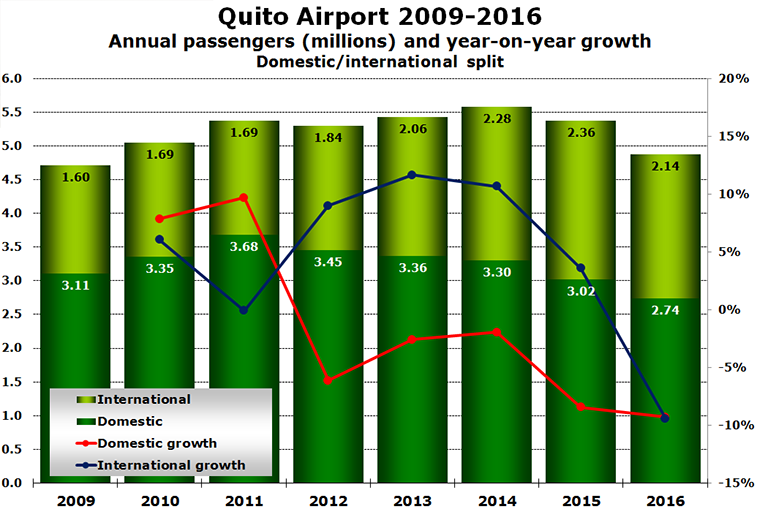 While full 2017 passenger statistics have not been made public, schedules indicate that the picture for last year is unlikely to be promising. When referencing OAG Schedules Analyser data, Quito is offering just over 6.2 million annual seats in 2017, a reduction of between 10% and 11% when compared to the 6.9 million seats that were available in 2016.

OAG schedules show that Quito was served by a total of 13 airlines at the start of 2017, however this number fell to 11 by the end of the year, with the capital airport loosing Insel Air’s connection from Curaçao at the start of S17, while VivaColombia (highlighted in red) ended its four times weekly service from Bogota in June. Of the airport’s remaining carriers, only four (highlighted in light green) increased their capacity at Quito in 2017. The best performing airline amongst this quartet at Quito last year was JetBlue Airways, which reported an increase of just under 18% in seats on its route from Fort Lauderdale, which launched in February 2016. 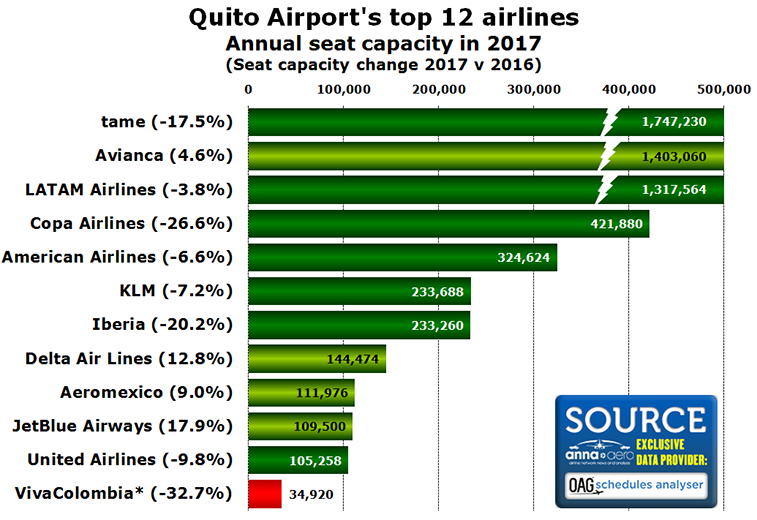 While Quito may have lost two airlines in 2017, things are looking up for the airport this year. Air Europa has already joined the airport’s carrier line-up, having introduced a new service from Madrid, where it joins Iberia on the route from the Spanish capital. Along with greeting a new SkyTeam member, Quito will welcome the arrival of Condor from Frankfurt in October, with the German service becoming the airport’s third European connection after Madrid and Amsterdam.

Of Quito’s top 12 routes, five (highlighted in light green) are domestic connections, while the city is also connected to a further four cities in Ecuador. Guayaquil is by far the number one route from Quito, with the link to Ecuador’s largest city accounting for 38% of all departing seats from the capital in 2017, down from a share of 39% in 2016. The loss of market share is due to the city pair encountering an 11% reduction in seat capacity between 2016 and 2017, which equals a loss of 150,000 one-way seats. Along with Guayaquil, a further eight routes in the top 12 saw capacity reductions over the past 12 months, with the four exceptions being Lima (seat capacity up 21%), Madrid (70%), New York JFK (291%) and Atlanta (13%). The reason for JFK’s sharp rise is tame ending flights on the route back in March 2016, before resuming the service a year later, having moved its Big Apple operation to Guayaquil during that period. 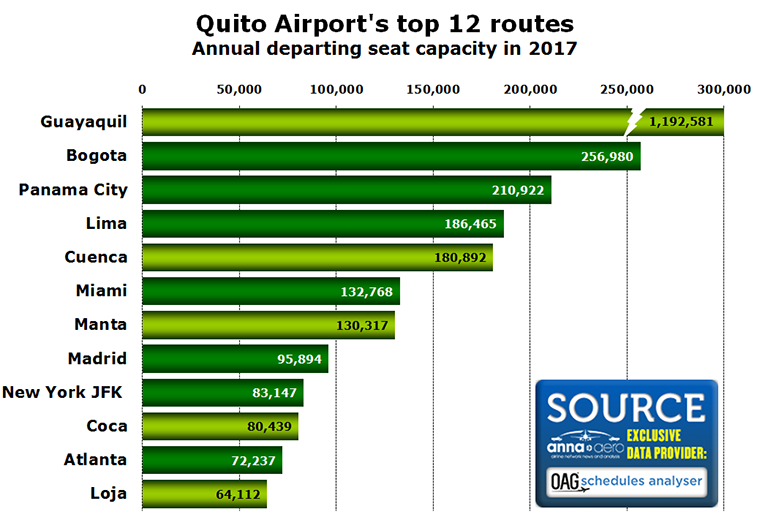 When referring to OAG Traffic Analyser data, approximately 859,000 passengers travelled indirectly to/from Quito in 2017, meaning roughly one in six of the airport’s passengers was a connecting traveller last year. A further look shows that North and Latin America are the most popular destinations, with Quito’s leading unserved routes being Los Angeles in the US (estimated 38,300 indirect passengers in 2017), Medellin in Colombia (37,100) and Santiago in Chile (35,800). Along with these three services, other popular connecting markets included Orlando, Barcelona, Washington, Chicago and London. 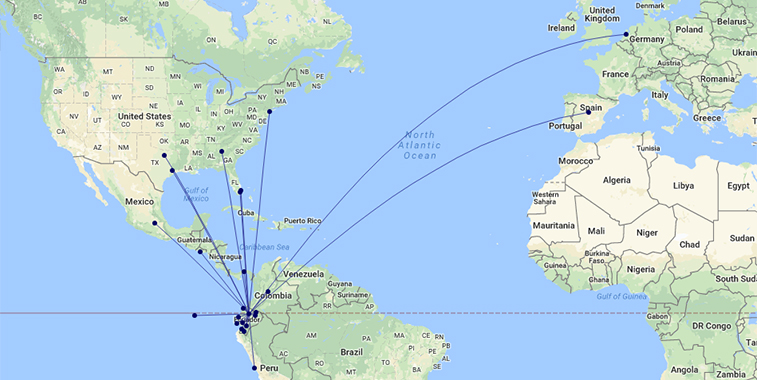 This route map indicates the network from Quito during the week when Routes Americas takes place in the city, with some 800 airline and airport network planners expected to attend the event in a few weeks’ time. Two routes which are easily identifiable on this map are Amsterdam and Madrid. From October 2018, a third European service from Frankfurt will begin courtesy of Condor. An analysis of OAG Traffic Analyser data shows that three points which would be ideally suited for the airport’s network include Los Angeles, Medellin in Colombia and Santiago in Chile.