Wizz Air to open Vienna base with three based aircraft and 17 new routes; appears at first not to target easyJet or Eurowings 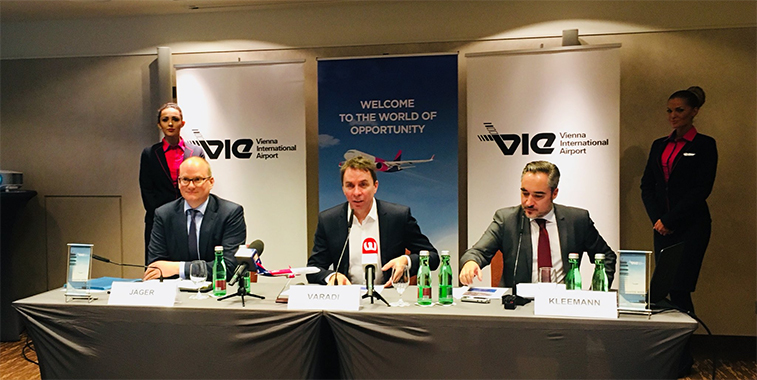 Seen announcing Wizz Air’s new Vienna base in the Austrian capital on 9 January are: Julian Jäger, CEO of Vienna Airport; József Váradi, CEO of Wizz Air; and Peter Kleemann, Head of Press Office and Spokesman, Vienna Airport. Wizz Air will begin serving Vienna in April from its bases at Gdansk, Tuzla and Varna, while from June it will station one A320 before a further two A321s are positioned in from November. The airline will offer 450,000 seats from Vienna in 2018.

Wizz Air has announced that it will add Austria to its network from April, with it becoming the airline’s 44th country market. Initially, the airline will serve the Austrian capital from three bases starting in April – Gdansk, Tuzla and Varna – before stationing one A320 in Vienna from 14 June, allowing it to open a further five routes for the summer season. Then for W18/19 it will add a further two A321s to its new base, which will enable the airline to open a further nine services. Vienna become’s the airline’s second base in Western Europe after London Luton. A breakdown of the routes that Wizz Air will open from Vienna can be seen in the table, along with the direct competition the airline will face at the initial opening of the services.

The initial findings show that Wizz Air will only face direct competition on six of the routes that it will open from Vienna, with Austrian Airlines being the most prevalent competitor, going head-to-head on four city pairs. What is interesting is that Wizz Air appears not to be going after Eurowings or easyJet, both with well-established bases at Vienna, with the former only competing on one sector, and with the latter not serving any of Wizz Air’s planned destinations. This may be a factor as to why Wizz Air has chosen not to serve Luton, its number one airport, from Vienna, with this sector already being flown by easyJet four times weekly this coming summer. It should be noted that Eurowings does operate between Vienna and Dortmund, however its service on the city pair is currently not bookable past 26 October, with Eurowings’ schedule for next winter still being planned. Only two of the routes launched by Wizz Air will initially be served daily, namely Rome Fiumicino and Dortmund, but Tel Aviv will become a daily operation from 7 November. Along with Tel Aviv seeing a frequency increase, both Malta and Valencia will see an additional weekly service in W18/19.

While Wizz Air is a new brand to Vienna, and indeed Austria, the ULCC already has a presence some 80 kilometres away from the Austrian capital across the border in Slovakia – Bratislava. On initial inspection, Wizz Air’s new route to Vienna from Tuzla is an operational switch from the Slovakian capital, with the last flight between Tuzla and Bratislava scheduled for 23 April. The other five routes that Wizz Air operates to Bratislava, namely Kiev Zhulyany, Sofia, Skopje, Warsaw Chopin and from March Luton, appear to be unaffected by the Vienna strategy.

Should break into Vienna’s top 12 this year

Wizz Air states that it will offer 450,000 seats on its Austrian routes in 2018, with it operating 69 weekly flights by the end of the year from Vienna. Based on current schedules, that size of operation would place Wizz Air as Vienna’s 11th largest airline in 2018 (highlighted in purple below), sitting above Spanish LCC Vueling, a carrier which will see an enhanced presence in the Austrian, German and Swiss region this year thanks to IAG’s purchase of NIKI. However, while NIKI is an Austrian airline, its operation at Vienna currently is small enough not to allow Vueling to offer more seats than Wizz Air from the Austrian capital this year. Nonetheless, IAG’s purpose for NIKI will become more clear in the coming weeks, although it may have to re-adjust its plans following Wizz Air’s announcement. 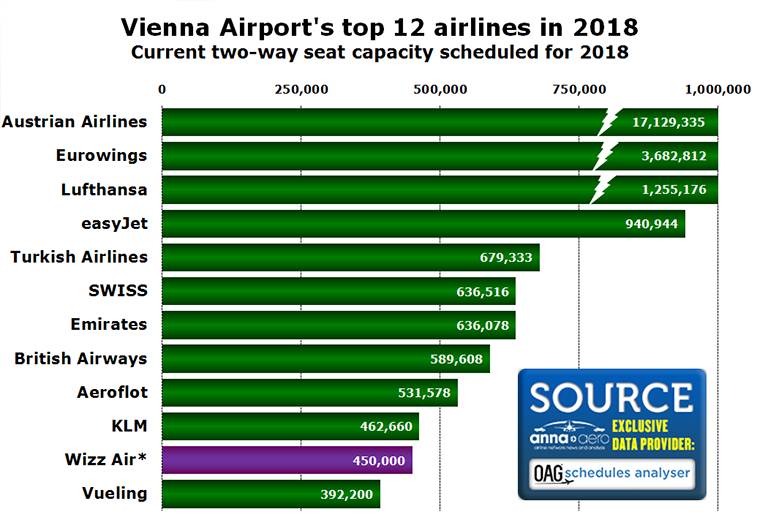 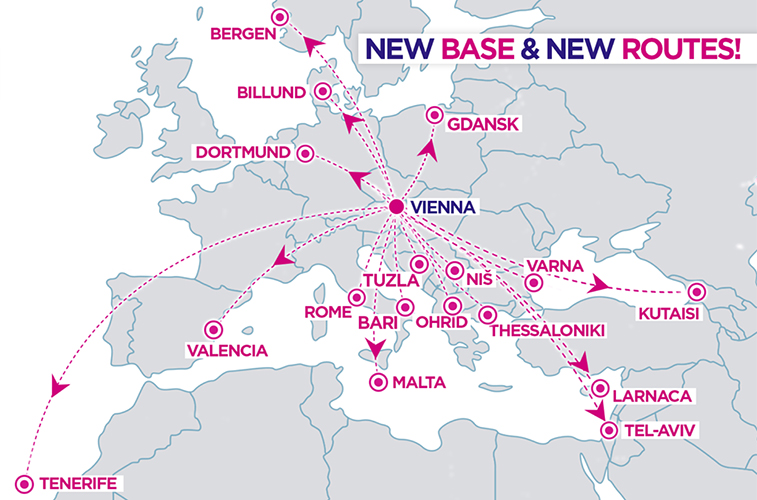 Wizz Air has announced that Vienna will become its latest base, with the carrier stationing one A320 at the airport from June, followed by two A321s in November. On the surface, it appears that Wizz Air’s initial strategy is not to go after easyJet (no competing routes) and Eurowings (one), but to establish its own presence while perhaps taking on Ryanair from Bratislava. The Slovakian airport is the initial victim of the move, with it losing its Wizz Air service to Tuzla which is being moved to Vienna from 27 April. With this business venture, Wizz Air should become Vienna’s 11th largest airline in 2018.