Airlines launched 3,500+ routes in 2017, Ryanair remains number one for new services as LCCs continue to dominate 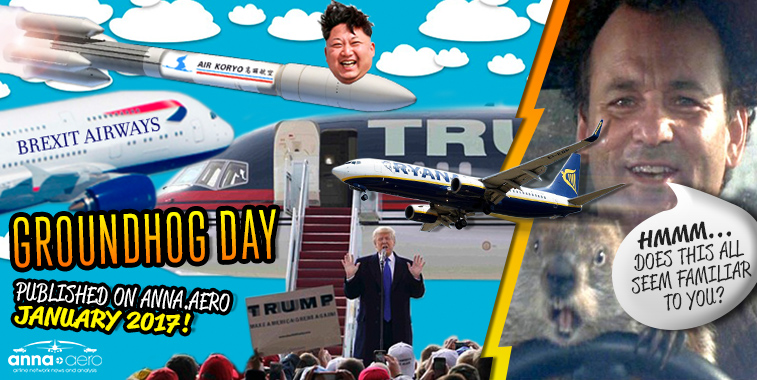 With Trump, North Korea and Brexit continuing to dominate the global news headlines and some familiar airlines leading the way at the top of the new route league tables, you might be forgiven for getting a sense of déjà vu when thinking back to our new route review and preview feature from this time last year. Four of the five airlines that topped the new route leader board in 2016 maintained their spot in the top five in 2017, with first, third and fourth positions remaining unchanged. Irish ULCC Ryanair remained the number one operator for new routes in 2017 extending its advantage over the competition from the previous year.

Ryanair maintained its position as the leading carrier for new route launches in 2017. It commenced operations on 278 new airport pairs last year, which kept it way ahead of the chasing pack, and represented a considerable increase from the 200 routes it launched in 2016, when it also topped the new route rankings. The Irish ULCC started more than twice as many services as fellow European operators Eurowings and Wizz Air, which finished second and third in the new routes table for 2017, after commencing 125 and 104 airport pairs respectively. anna.aero identified 3,524 new services started by airlines globally during 2017, although this analysis does not attempt to determine how many of those were previously unserved. According to the available data, the average frequency on the new services was 3.6 flights per week. 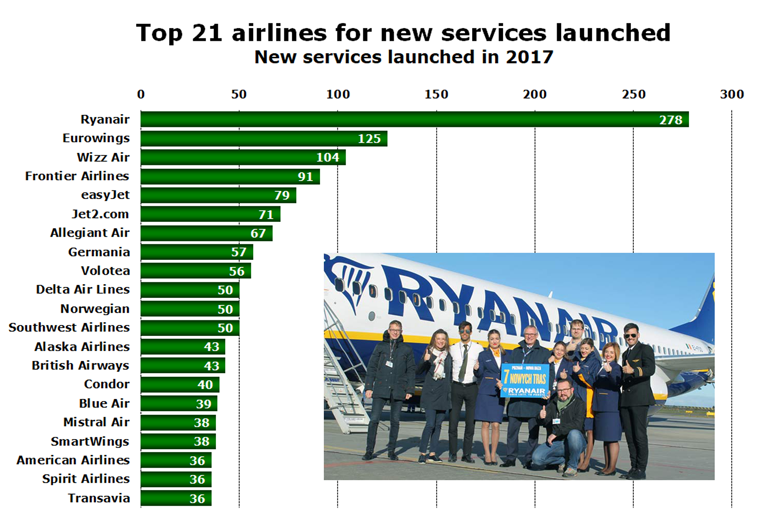 The top 21 airlines for new routes in 2017 are included here, since American Airlines, Spirit Airlines and Transavia were all tied with 36 new services. Wizz Air, Frontier Airlines and easyJet join Ryanair in retaining a spot in the top five for new route launches for a second consecutive year. Wizz Air and Frontier stay in the third and fourth place positions they occupied in 2016, but easyJet has dropped from second to fifth. As in 2016, the top five is dominated by European LCCs, although in 2017, Vueling was displaced by Eurowings, with the Spanish carrier not even making the top 21. In total, at least two-thirds of the 21 carriers offering the most new routes in 2017 can be classed as LCCs, including the top seven. One-third of the top 21 carriers are US-based operators, while three are based in the UK and Germany. The other eight airlines all have European bases. Four of the top-ranked airlines can be classed a full-service carriers. Of these, Delta Air Lines started the most new routes, followed by Alaska Airlines, British Airways and American. BA and Alaska Airlines were both new entrants to the top 20 in 2017.

The US maintained its number one ranking as the most siginificant country for route launches across all airports in 2017. In 2016 it topped the charts with 916 new services, but this has been eclipsed in 2017, following the start of 971 new routes from US airports. More than twice as many new services were launched from US airports in 2017 than from the second largest country market. Germany, Spain and the UK continued to battle it out for the honour of second, third and fourth places. The UK remained in the fourth spot it occupied in 2016, while Germany and Spain swapped places from the previous year, with the former overtaking the latter to become the second biggest market for new air services across all airports. 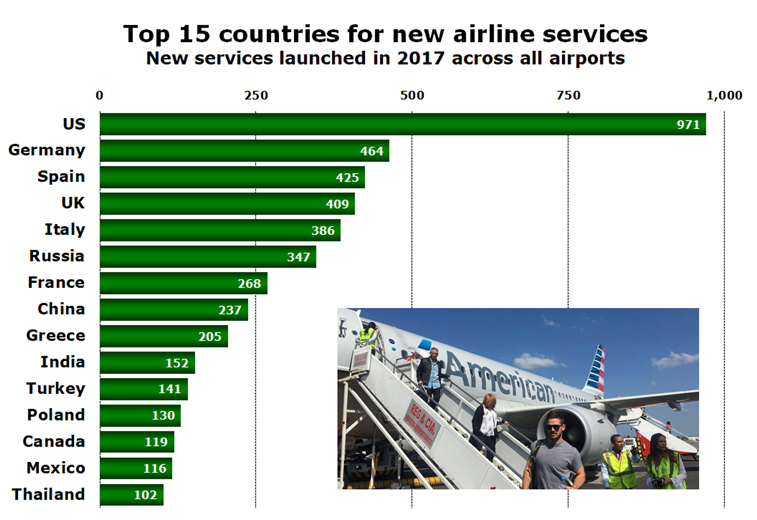 Of the top 15 countries for new routes in 2017, 14 were also in the top 15 in 2016. Japan lost its place among the top-ranked countries and was replaced by Thailand. Seven of the top 15 country markets are in the EU. Interestingly the number of new routes launched from airports in China fell from 313 in 2016 to 237 in 2017, despite the fact that the Asia Pacific powerhouse has seen some of the strongest global growth in air services in recent years.

EU airports lead the way for new services in 2017

European facilities dominate the top 15 rankings when new services for 2017 are measured on an individual airport basis. They account for 11 of the 15 top-ranked airports, with the other top performers being located in the US, Russia, Turkey and Malaysia. German and UK airports are particularly prevalent with four airports from each country in the top 15. Munich and Frankfurt top the charts. Munich saw 30 new services launched by Eurowings in 2017, while Frankfurt benefited from becoming a new base for Ryanair. Birmingham and London Stansted had the joint third highest number of new services, with both airports becoming new bases for Jet2.com. The UK LCC launched 22 services from Birmingham and 29 from Stansted in 2017. 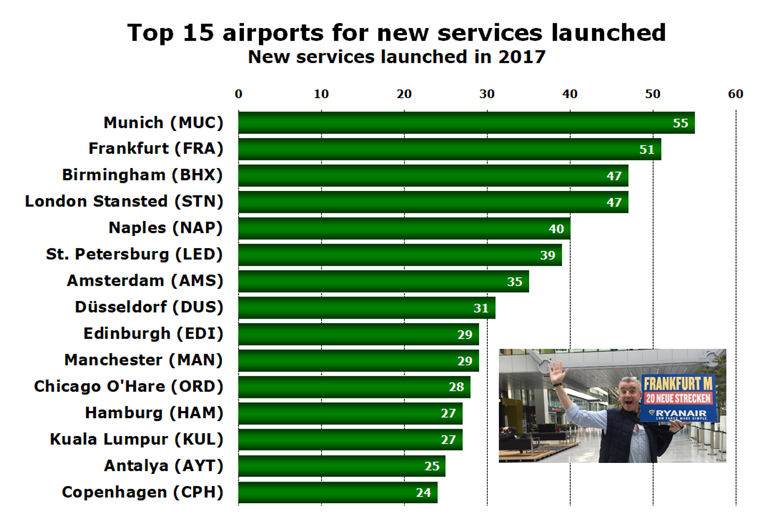 anna.aero’s New Route Database already has details of 1,415 new services that are scheduled to start during 2018. These are being flown by 168 airlines. This time last year the corresponding figures were 1,150 and 162, suggesting that 2018 is ahead of the curve and on track to exceed 2017 in terms of global airline network expansion. A total of 17 airlines have already indicated their intention to start over 20 new services this year (five more than at this point in 2017) with 12 announcing more than 30 routes. easyJet and Eurowings have announced the most new services so far with 74 and 73 respectively. Germania and Wizz Air are joint third for new route announcements with 59, and are followed by Ryanair with 58. The airlines with the next most planned services at this point are Frontier, Condor, Volotea and Jet2.com. Then come Thomas Cook Airlines, American and TUI Airways.

LCCs head the list for new services announced so far. easyJet will open a new base in Bordeaux for S18 with seven new routes. The UK LCC will also make minor network additions at a number of its UK bases, but about 25% of its new routes will commence from Berlin Tegel, following the partial takeover of airberlin assets in late 2017. Eurowings will commence 14 new services from Munich and 12 each from Düsseldorf and Vienna. 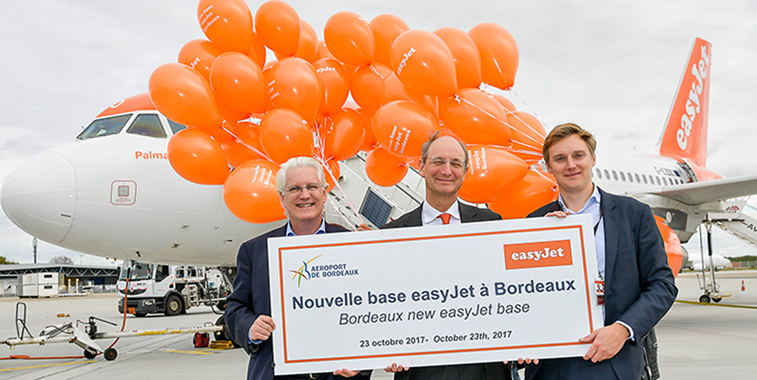 easyJet has announced the most new routes for 2018 so far. The UK LCC already has plans to open 74 new services this year, about one quarter of which will launch from Berlin Tegel, following the partial takeover of airberlin assets in late 2017. In October 2017 easyJet announced its intention to open a new base at Bordeaux, from where seven new routes will be launched in 2018.

The USB3 airlines currently lead the way for full-service carrier new route announcements in 2018. American and United Airlines have announced 43 and 23 new routes respectively, while Delta has 14 planned. SAS currently tops the table for European full-service operators with 24 new routes announced, ahead of Lufthansa with 11 and BA and Iberia with nine each. Qatar Airways is currently the leading MEB3 carrier for 2018 route announcements, with 19 planned services, putting it well ahead of Emirates with one and Etihad Airways, which has not confirmed any new routes at this time.

If you are an airline or airport and have pictures of route launch celebrations this year we want to see them, especially if they involve cakes, ribbon cuttings, mascots, fire truck water arch salutes, big welcome banners, celebrities, speeches, flowers, cultural dances, humane animal performances, juggling, gift exchanges etc, etc, etc. Please e-mail your pictures, ideally with names and titles of any key people involved, to marc.watkins@anna.aero, nick.preston@anna.aero and jonathan.ford@anna.aero. We will then gladly share these pictures with our global readership. 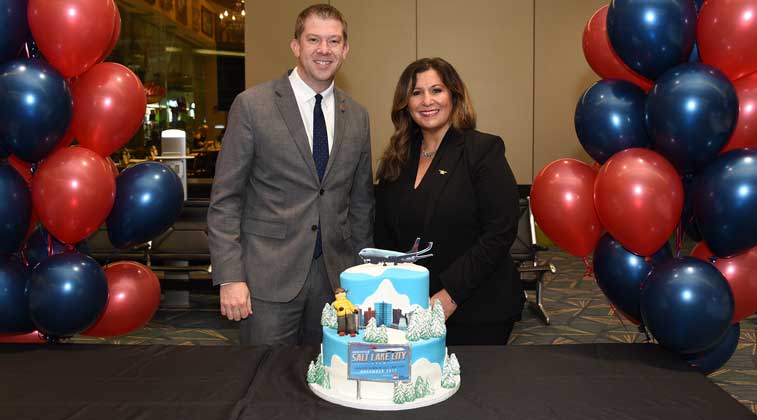 Delta Air Lines launched more new routes in 2017 than any other full-service carrier. The US major commenced operations on 50 new routes last year including this one from Salt Lake City to Tampa, which launched just before Christmas. Delta has already announced 14 new routes for 2018 including a link between Indianapolis and Paris CDG.